Accessibility links
In A Syrian Souk, Support For The Regime Falters The Muslim merchants of the country's most famous bazaar, Hamidiyah, have traditionally backed President Bashar Assad. But the government's brutal response to the uprising, coupled with crippling economic sanctions, is eroding that support. 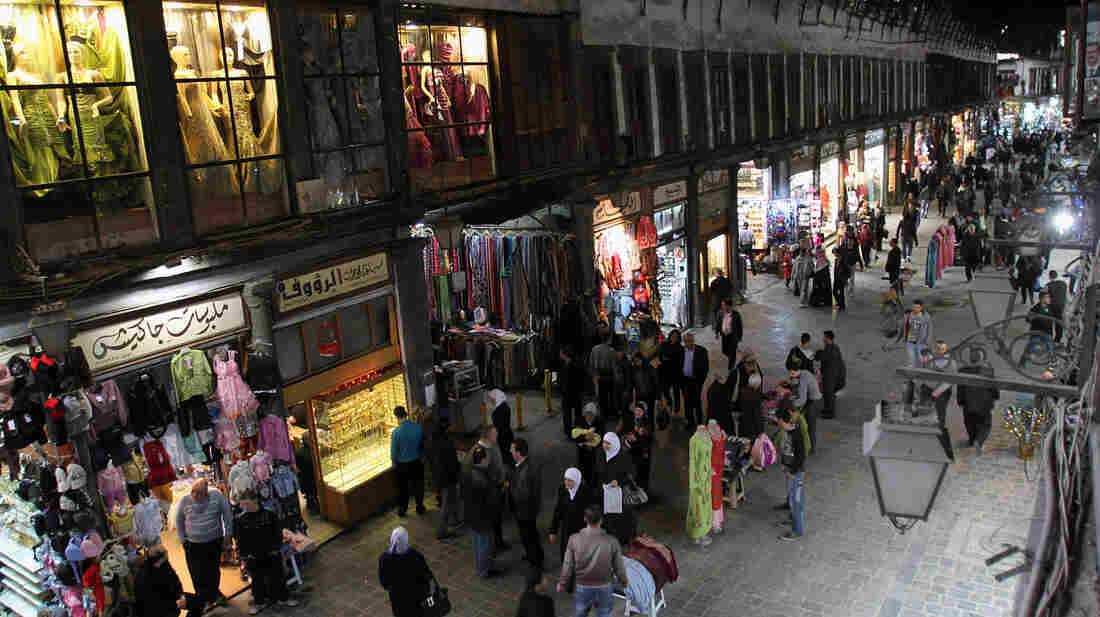 People walk through Hamidiyah market in Damascus, Syria, Feb. 28. The merchants of this landmark bazaar were once ardent supporters of President Bashar Assad. That's no longer the case. Bassem Tellawi/AP hide caption 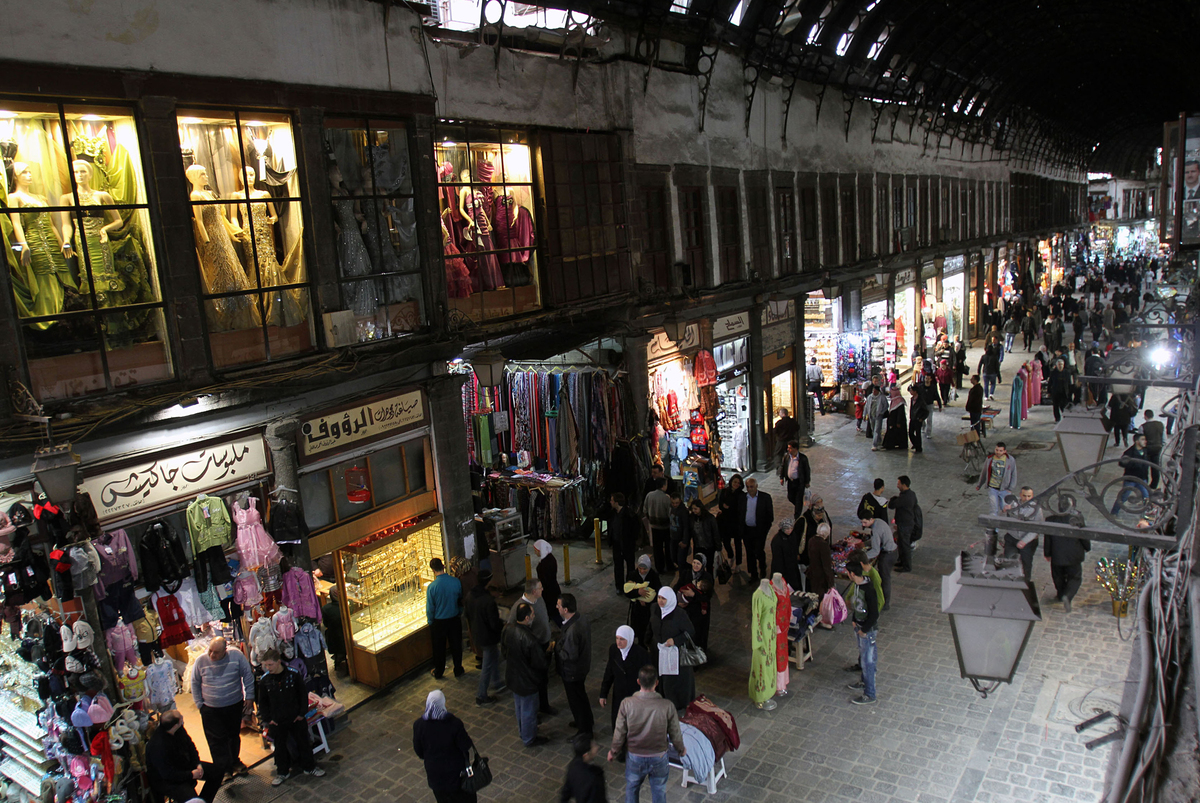 People walk through Hamidiyah market in Damascus, Syria, Feb. 28. The merchants of this landmark bazaar were once ardent supporters of President Bashar Assad. That's no longer the case.

In Syria's capital, Damascus, the Hamidiyah souk is a landmark — a centuries-old covered market linked to a maze of alleyways in the heart of the capital. Over the 15-month uprising, Syria's merchants have supported the regime of President Bashar Assad. But that support is crumbling.

Everyone in the traditional market is keen to sell something, so when these merchants closed their shops in May to protest a massacre of more than 100 people in Houla, a remote village far from Damascus, it was unprecedented.

A merchant who participated in the strike — who is too afraid to give his name — is still angry enough to say he was part of the strike the security police tried to end by force.

These merchants are mostly Sunni Muslims, who form the core of Syria's business community. For decades, they were regime loyalists — the backbone of Assad's Alawite-dominated regime — but no longer, says another merchant, who also wouldn't give his name.

"The strike, of course, it is unusual. It is something very new in the Syrian society, because it's a police regime here," he says. "You cannot express yourself. You cannot speak up." 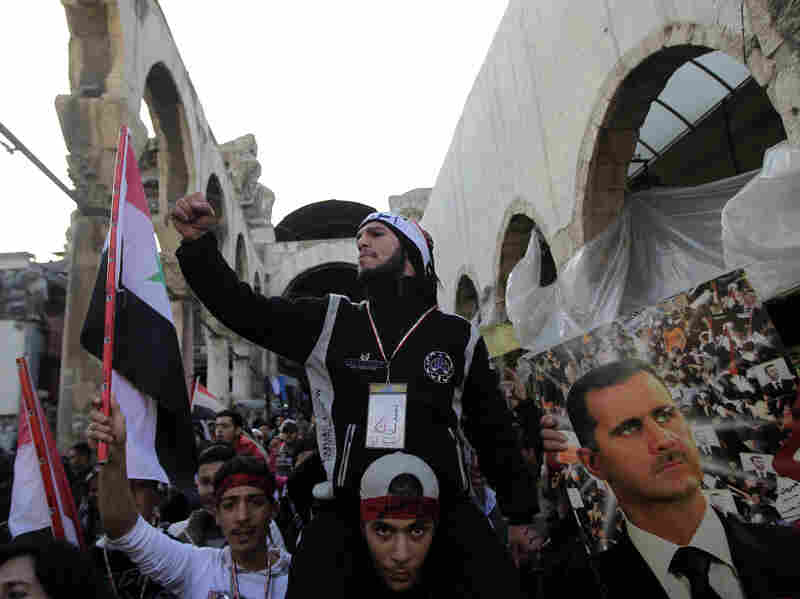 Assad supporters chant pro-government slogans as they rally in Hamidiyah Jan. 10. But that support is crumbling, evidenced by a strike by the market's merchants to protest killings in Houla, Syria. Joseph Eid/AFP/Getty Images hide caption 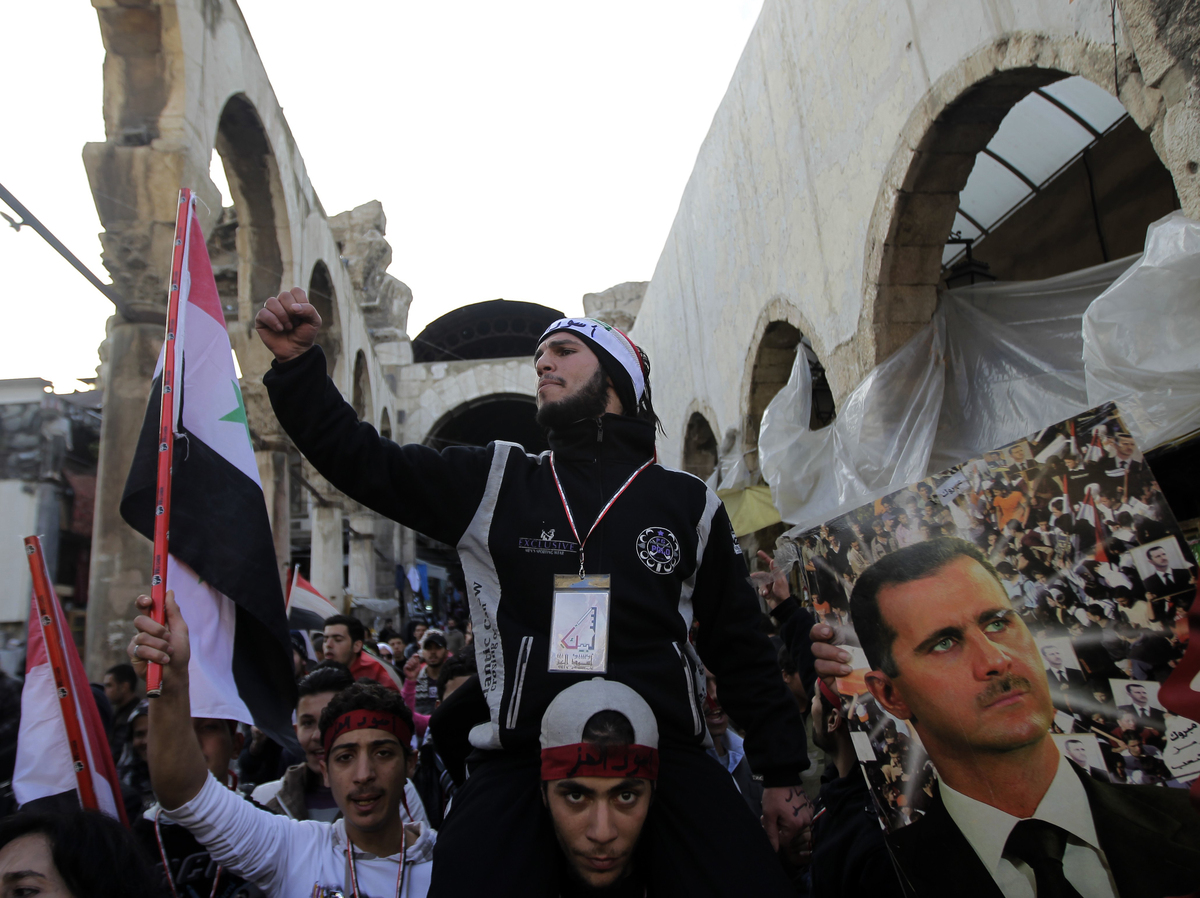 Assad supporters chant pro-government slogans as they rally in Hamidiyah Jan. 10. But that support is crumbling, evidenced by a strike by the market's merchants to protest killings in Houla, Syria.

So, for the businessmen to strike was a big statement, he says.

"Yes ... it's a message to the regime that merchants are not with him anymore," he says.

The regime's brutal response to the uprising has taken a toll. Add to that the crippling economic sanctions imposed by the international community that have driven up prices and dried up the tourist trade.

Another merchant, who stocks scarves and handmade Syrian goods, says his business has dwindled to zero.

He has owned his shop for years. It was once a thriving business, supported by visitors from abroad. He was part of the Sunni business community that supported the regime.

But Syria is changing fast, fragmenting along sectarian lines, and the tensions are reflected in this market and in the comments from this unfailingly polite businessman as he gives directions to another part of the old city — the Christian part.

When asked whether there is any way to tell the difference, he says most Christians like the government and are now afraid.

Although it's hard to measure fear on the streets of the Christian neighborhood, it's well-known that Syria's Christians fear an Islamist takeover of the country. They know what happened to Christians in neighboring Iraq, where churches were burned and Christians driven out. Many of Iraq's Christians are still sheltered in Syria.

Syria's Christians share the economic crisis with the rest of the country. The streets in the Christian quarter are unusually quiet; restaurants and hotels are empty.

Roula Dodoch runs Al Mamlouka, a boutique hotel housed in an old Damascene home with a beautiful terrace and orange trees in the courtyard. It was once one of the most successful hotels in the city, but Dodoch hasn't checked in a guest for months.

Echoing the regime's line, she says she wants the Syrian army to crush what she calls armed terrorists. But how can the government protect us, she asks, when these gangs are armed and supported from outside?

"Of course, when the Gulf people send guns and money to these gangsters, of course, nothing will be finished," she says. "They want freedom? What kind of freedom they want?"

Fear is the prevailing mood in Syria now. Christians fear more sanctions and economic collapse; Sunnis fear the violence of the government. And everyone in Hamidiyah seems to dread the chaos they say will come if the Assad regime collapses.