Accessibility links
'Louie': TV's Most Original Comedy Returns Fresh Air's critic at large, John Powers, says Louis C.K.'s raunchy FX show is changing the way comedy is done — for the better. "More than any TV comedy ever, it's all about capturing moments of truth and freshness," he says. 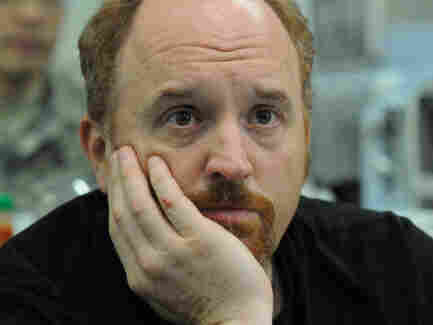 A lot of stand-up comedians make us laugh, but only a handful, like Lenny Bruce, Woody Allen or Richard Pryor, actually change the way that comedy is done. It's too early to be sure, but another one of them may be Louis C.K., the paunchy, balding, ginger-haired comic who's something of a quiet radical. He has one of those comic talents that's at its best when it isn't worried about being funny.

This is clearest in his television series Louie, which is beginning its third season on FX. Written by, directed by and starring C.K., it's an auteurist program that uses the freedom of cable to reinvent what we think of as a TV show.

On the surface, Louie follows the template of Seinfeld or Curb Your Enthusiasm — it's a riff on its hero's own life. C.K. plays a successful comedian named Louie, who, like C.K. himself, is the divorced father of two young daughters.

Each episode is made up of bits from his stand-up routine and, more interestingly, of anecdotal episodes from his off-stage life. We see him trying to figure out his two daughters, winningly played by Hadley Delany and Ursula Parker. We see him dealing with the ins-and-outs of the comedy biz — as when, last season, Joan Rivers taught him a lesson about professionalism.

This season we see him looking for love. He meets a bookseller, beautifully played by Parker Posey, who's like a screwball-comedy heroine in a fallen world where screwball comedy is no longer possible.

Now it must be said that, while Louie is quite amusing, it's often obscenely so. Just the other morning on The Today Show, a correspondent chastized C.K. for what she called "the filthy stuff."

In this new season, for instance, Louie has a hilarious encounter with a truck-driving businesswoman, played with enormous vim by Melissa Leo, that's so gleefully dirty that we can't find even a snippet to share with you.

Yet what gives C.K.'s comedy its richness is that even the filthy stuff is never there just for its own sake, the way it is in, say, HBO's Veep, which vaunts its soaring cadenzas of profanity. It has something serious behind it, a sense of urban melancholy, of male fragility, or the mere desire to understand wayward feelings. And C.K.'s humor is conceptual.

At its best, Louie possesses that same off-kilter unpredictability. Unlike nearly all TV comedies, it's driven not by the ritualistic rhythms of the gag, but by the rhythms of everyday reality. Where even a famously about-nothing show like Seinfeld was heavily plotted and built around killer lines, Louie feels free-form, loose and uninflected.

Such looseness is necessary, for Louie isn't about grand drama or even the mock drama cooked up by Curb's Larry David. It's a confessional look at the niggling vicissitudes of ordinary existence, especially the precarious masculinity of a middle-aged man who jokes about his flaws because he's so aware of them.

We see Louie's sexual selfishness, hear a lover tell him he's bad in bed and watch him blush when someone thinks he's gay, a blush all the redder because he doesn't think there's anything wrong with being gay. C.K. shows his imperfect body almost as fearlessly as Lena Dunham does in Girls -- although he clearly feels worse about the extra pounds than she does.

And like Dunham, he's far more artistically ambitious than he might first appear. Louie has always been one of the best photographed shows on TV — it's got a gorgeous old '70s-movie look — but what's impressive is that C.K. keeps getting better as both a director and an actor.

He needs to, for Louie is ultimately in pursuit of big game — the flow of life in its dizzying elusiveness. More than any TV comedy ever, it's all about capturing moments of truth and freshness, be it the pleasures of bantering with your kids, a misinterpreted gesture of friendship toward someone you meet on the road, or the sudden recognition of the deep sadness burning within someone you've been finding utterly delightful.