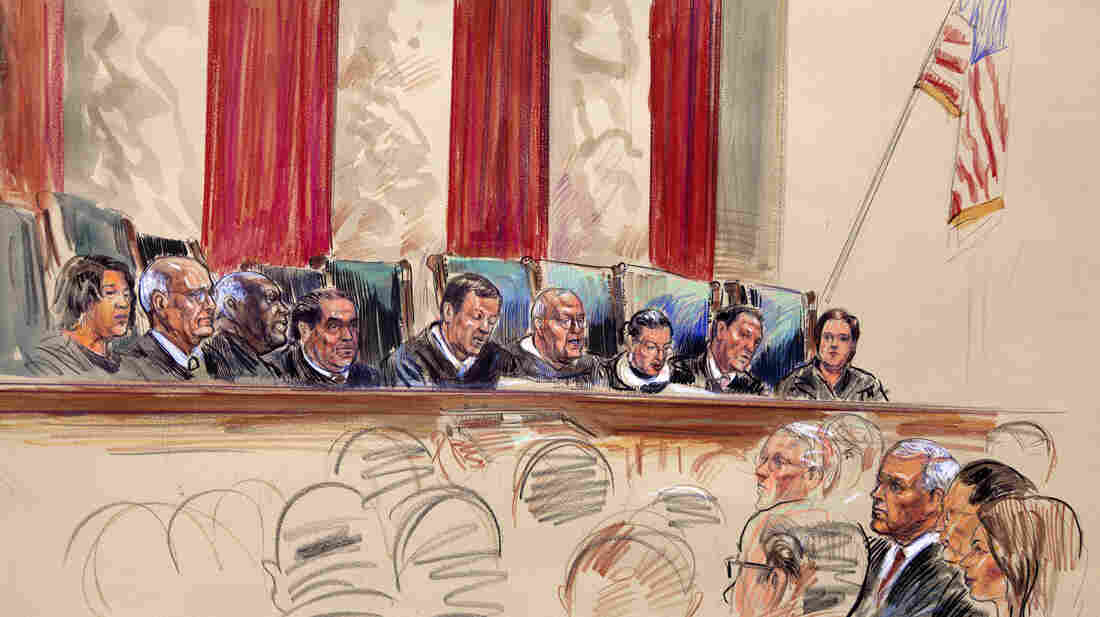 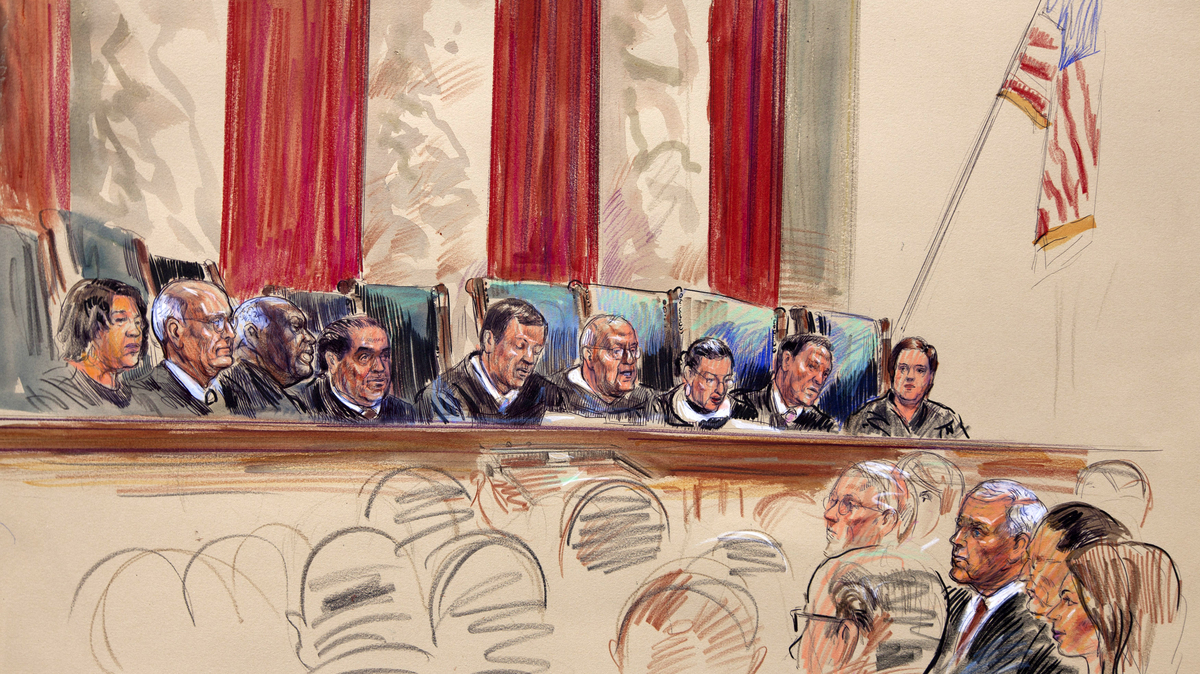 Shock, dismay, relief, confusion — all those emotions played out Thursday when the U.S. Supreme Court announced its 5-to-4 decision to uphold almost all of President Obama's health care overhaul.

The ruling, with shifting majorities on different provisions and multiple dissents, covered close to 200 pages and provoked initial confusion. Both Fox News and CNN got it wrong, reporting at first that the individual mandate had been struck down. But when the dust cleared, the law labeled derisively by Republicans as "Obamacare" was largely intact.

Almost no one predicted the legal path to the outcome. Indeed, not one of the more than two dozen lower court judges who ruled on the law reached the same legal conclusion as the Supreme Court.

Court watchers expected Justice Anthony Kennedy to be the deciding vote, but he was among the dissenters who would have struck down the law in its entirety.

Instead, it was Chief Justice John Roberts — appointed by a Republican president, George W. Bush — who cast the decisive fifth vote, crafted an unusual and precedent-setting opinion, and upheld the law, mandate and all.

Writing for himself, and backed by a separate opinion from the court's conservatives, Roberts rejected the government's argument that Congress could require the individual mandate under its power to regulate commerce. The federal government cannot regulate individuals who are not already engaging in interstate commerce, he said. And in this case, those who do not own health insurance are not already in commerce. The individual mandate, he concluded, thus cannot be sustained under the Commerce Clause of the Constitution.

But turning to an alternative argument, Roberts said that the government, using its taxing power, could require people to have insurance or pay a penalty. True, he acknowledged, Congress labeled the fee a penalty, not a tax, but it is paid to the Internal Revenue Service and is based on the individual's income. In short, it bears all the attributes of a tax.

Indeed, Roberts noted, "taxes that seek to influence conduct are nothing new." Here, this tax on those who do not own health insurance was no more than a tax incentive to purchase insurance, and is thus a permissible exercise of Congress' tax power.

Finally, seven justices ruled that the Medicaid expansion in the law violates the Constitution by attaching too coercive a condition onto the states to force them to sign up for the program. The coercion, in the court's view, was that those states that refuse to expand coverage requirements would see all of their Medicaid funds cut off, not just the funds for the expansion. That part of the decision represents the first time the court has ever rejected a condition on federal spending as too coercive on the states. But most experts agree that the decision will have little practical effect, since the court majority left the expansion intact for any state that wants to participate.

I can't remember a case where five justices accepted more of my arguments, but nonetheless didn't side with us on the bottom line.

Paul Clement, who argued the case on behalf of the states

Reaction to the decision was pure astonishment. Georgetown law professor Randy Barnett, the legal architect of the challenge to the law, said all the reaction comments he had gamed out in advance were worthless.

"Nothing that I had in mind in advance worked today," Barnett said. "It is bizarre to have won on the major legal claim that one's been making for over two years and still lose on the outcome because the chief justice decides to redefine this penalty as a tax."

Paul Clement, who argued the case on behalf of the states challenging the law, was almost bemused.

"I can't remember a case where five justices accepted more of my arguments, but nonetheless didn't side with us on the bottom line," he said.

While they were clearly disappointed, conservative thinkers took considerable solace from the court's drawing a line in the sand limiting Congress' commerce and spending clause power.

"It is true that this is the first time Congress did something like this," Stanford law professor Michael McConnell said, referring to the novelty of the individual mandate, "but that's why the decision will have a lot of importance. Because if this had been approved, then the precedent would have been set for Congress to do this in any number of areas. So this nips it in the bud."

Constitutional scholars like Walter Dellinger, who supported the health care law, were quite simply relieved.

"The biggest winners today are all the families who will get to see a doctor when they're sick," Dellinger said, "and that is far more important than the legal theory of the politics of this case, and it's enormous."

Washington and Lee law professor Tim Jost said the bottom line is that the law has been upheld.

"I think there's a very clear message here to the states, that it's time to quit hemming and hawing, and proceed with implementing the statute, unless they want the federal government to implement it in their states," he said.

Jost was referring to the fact that under the law, states are required to set up health care exchanges through which people can have access to insurance packages that meet certain coverage and quality standards.

"I just can't imagine that any state in its right mind is going to turn down 100 percent Medicaid financing to insure hundreds of thousand of its residents if the alternative is its people continue to pay taxes for the expansion of the program in other states," Jost said.

Chief Justice Roberts won praise from both supporters and from some critics of the health care law.

"This [is] now officially the Roberts court. He has controlled the outcome in the case. He has done so in a way that actually advances a relatively conservative jurisprudence," Dellinger said.

McConnell, a former federal appeals court judge appointed by the second President Bush, has been a critic of the law. But he called the Roberts opinion "masterful" because it adopted principled limits on congressional power, while at the same time avoiding the charge that the court "was merely being political."

But some conservatives were outraged by what they saw as a betrayal. On Twitter, Rep. Jack Kingston, R-Ga., lamented that with the ruling, "I feel like I just lost two great friends: America and Justice Roberts."

"This was an activist court that rewrote the law to make it even more ineffectual, and even more expensive," Rep. Michele Bachmann, R-Minn., said. "So this is a sad day."

This was the somewhat confusing lineup of Thursday's decision: Roberts' opinion on the Commerce Clause was for himself only. The four dissenters — Justices Antonin Scalia, Clarence Thomas, Samuel Alito and Kennedy — wrote separately, using language that would have more broadly limited congressional power and would have invalidated the law in its entirety. The court's four Democratic appointees — Justices Ruth Bader Ginsburg, Stephen Breyer, Sonia Sotomayor and Elena Kagan — would have upheld the law under the Commerce Clause. But they joined Roberts' opinion to sustain the mandate on tax grounds instead.

And as to the Medicaid provision, Breyer and Kagan joined Roberts and the four conservatives in saying the conditions imposed by Congress were too coercive. But they agreed with Roberts, as did Ginsburg and Sotomayor, that the expansion should be upheld, so long as states are free to reject the new expansion without forfeiting their other Medicaid funds.

The four conservative dissenters co-wrote a joint opinion that expressed a view of a tightly limited federal government. They said the government's interpretation of the Commerce Clause would make it "a font of unlimited power," and they warned that allowing some states to opt out of the Medicaid expansion — while still requiring everyone to pay federal taxes that fund that expansion — creates a "destabilizing political dynamic, so antagonistic to a harmonious Union."