Accessibility links
Movie Review - 'Ted' - A Boy And His Bear, At Large In A Man's World Ted, the first film from Family Guy creator Seth MacFarlane, is about 35-year-old Johnny (Mark Wahlberg) and his decidedly adult talking teddy bear. NPR's Bob Mondello has to confess that in time, he warmed up to this movie for and about overgrown kids. 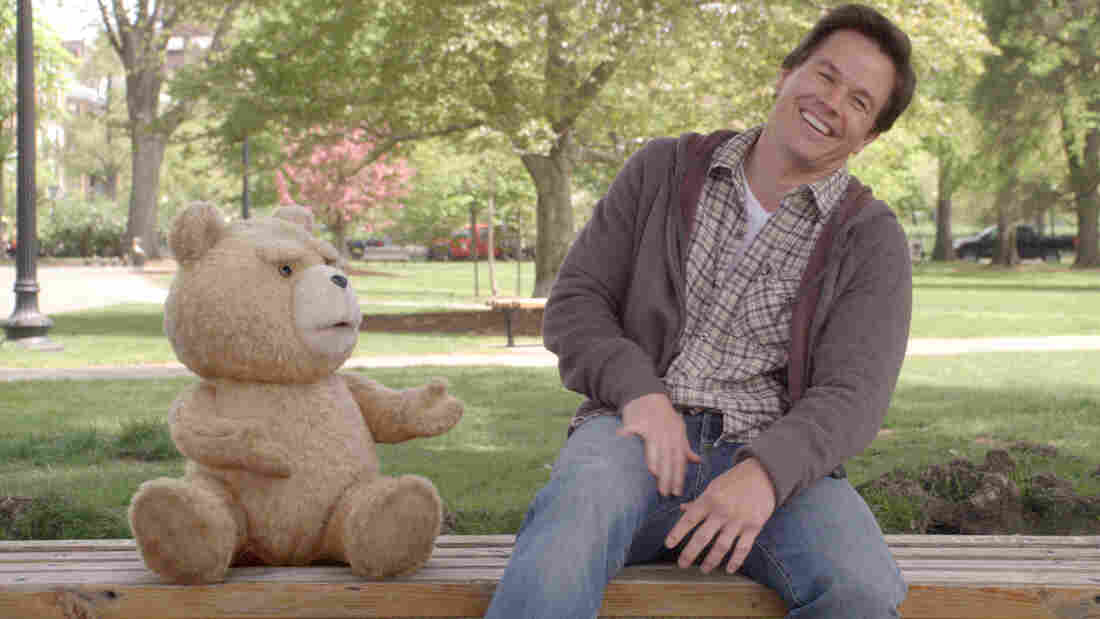 Ted (voiced by writer-director Seth MacFarlane) and Johnny (Mark Wahlberg) share a laugh in Ted. The talking teddy bear got his powers when 8-year-old Johnny wished upon a falling star for Ted to speak. Universal Pictures/Tippett Studio hide caption

Rated R for crude and sexual content, pervasive language and some drug use

Seth MacFarlane is known mostly for creating, writing and directing the animated TV show Family Guy. In the show, he also voices Peter and Stewie Griffin, and their dog, Brian.

With his new movie, Ted, he has moved to the big screen for the first time, again creating, writing and directing. And though it's a live-action picture, he has again voiced one of the characters — the titular teddy bear, whom I tried to resist but couldn't.

Really, I did try. The opening bit struck me as too cute by half. The loneliest kid on his block, 8-year-old Johnny gets a big teddy bear as a Christmas present, one that talks when you squeeze it. "I love you," it says in a squeaky little voice.

And as he's falling asleep that night, Johnny makes a wish on a falling star — "I wish you could really talk to me," he pleads — and is more than a little startled when the wish comes true. Teddy comes to life, startles the parents, briefly makes headlines — and then, as happens with most instant celebrities, the world loses interest.

Johnny grows older; Ted does, too; their voices deepen, and we catch up with them 27 years later. Johnny is now 35, with a job, an apartment, a girlfriend and ... a teddy bear.

Now, at this point in the picture, I'm still not buying in. John, played pleasantly by Mark Wahlberg with his own Boston accent, seems entirely real. Mila Kunis is Lori, also real, and tolerant beyond words.

And I guess Ted is animated persuasively, but I've still got Mel Gibson's The Beaver rattling around in my head, and despite this movie's boozing, bromance profanity and bong hits, it's all striking me as a little precious.

Then Lori insists that she and John need a little space — and the practicalities of that are what finally won me over. Ted, obviously, needs a job. Which means he needs to put on a tie — "You look dapper," Johnny assures him, unconvincingly — and go out in the world. And out in the world, he starts to — I dunno — actually exist. 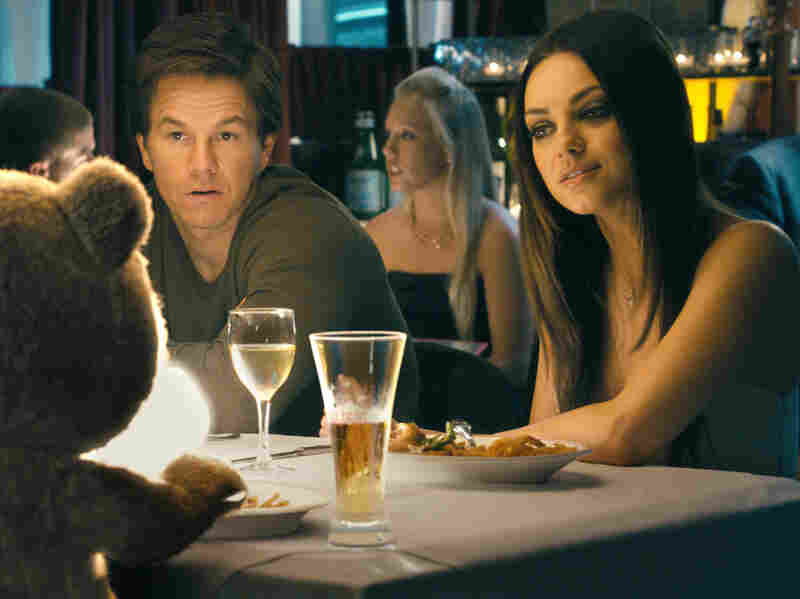 When Johnny's girlfriend, Lori (Mila Kunis), tires of Ted's constant presence around the house, Ted gets a job — which is when the comedy catches fire. Universal Pictures hide caption 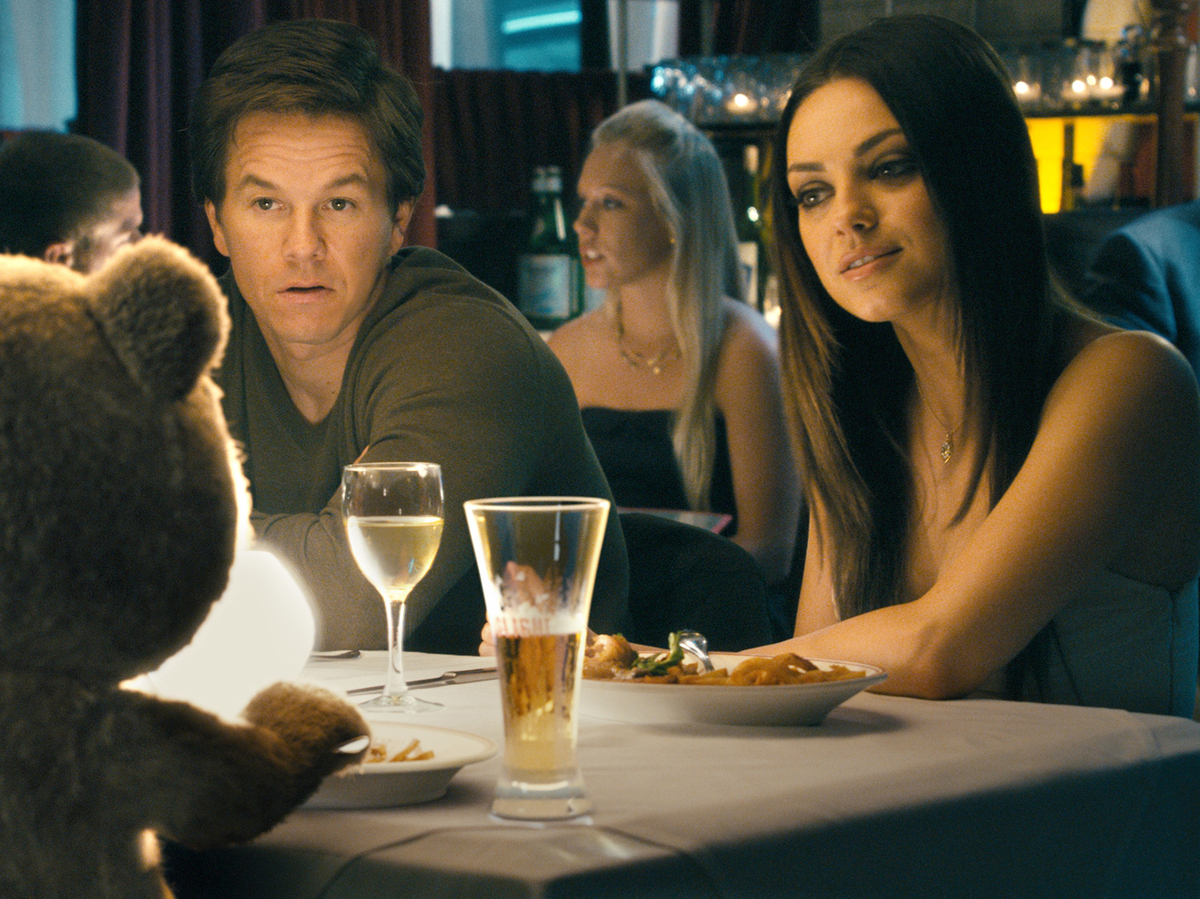 When Johnny's girlfriend, Lori (Mila Kunis), tires of Ted's constant presence around the house, Ted gets a job — which is when the comedy catches fire.

Once you stop fighting him, Seth MacFarlane makes Ted really funny, whether romancing a trampy checkout girl at the supermarket, carousing with hookers, getting into a knock-down-drag-out brawl with Johnny over an insult, downing shots with Flash Gordon (which would take too long to explain). It's idiotic, but not any more so than, say, The Hangover's wrong-gone bachelor party.

And at heart, it's the same story, about that transition point where overgrown kids have to finally grow up but get sidetracked by one companion — a boorish, coarse, consistently inappropriate fuzzball who makes the growing up difficult.

Ted is profane enough that it's not a movie real kids should be allowed anywhere near. But it's also a date movie, and one that MacFarlane has somehow made safe for arrested-development types who wouldn't be caught dead at a date movie — let alone one about a girl, a guy and a teddy bear.