Accessibility links
A Portrait Of Chinese Corruption, In Rosy Pink For decades, China's Communist Party has declared that corruption threatens its survival. But a state-run paper recently argued that corruption couldn't be stamped out, so it should be contained to acceptable levels. 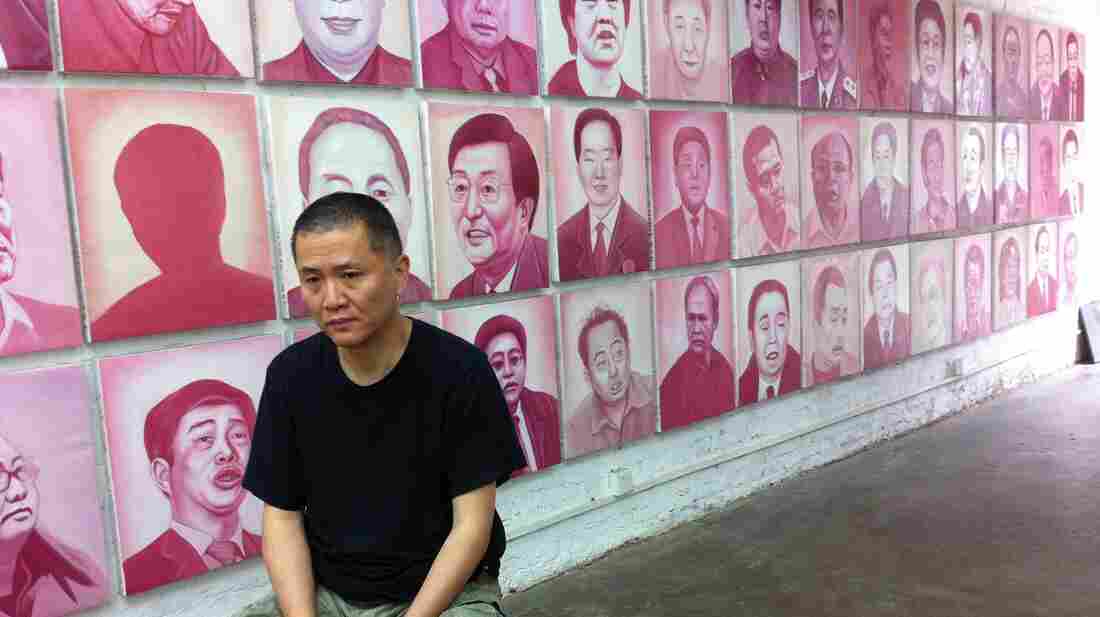 Artist and filmmaker Zhang Bingjian sits in his Beijing studio in front of his Hall of Fame — portraits of corrupt Chinese officials. He has commissioned portraits of 1,600 officials convicted of corruption. Angie Quan/NPR hide caption

Corruption is usually thought to be a bad thing. But in China, the answer is no longer crystal clear.

For decades, the country's Communist Party has declared that corruption threatens its very survival. But there are signs that this is changing. Recently, the state-run media have begun arguing that corruption can't be stamped out, so it should be contained to acceptable levels. And some corruption appears to be tacitly condoned.

At an artist's studio in Beijing, dozens of pink-tinted portraits hang in neat lines: beaming men in ties and glasses, the very picture of the archetypal Communist apparatchik. Their portraits are painted rosy pink — the color of money, or at least China's 100-yuan bill.

The collection of paintings is called the Hall of Fame. But in fact it's a wall of shame: Each is a Chinese official found guilty of corruption.

The gallery of rogues is the brainchild of artist and filmmaker Zhang Bingjian. So far, he has commissioned 1,600 portraits of corrupt Chinese cadres.

Investigations into misappropriation of public funds have dropped over the past decade. Many believe this is because corruption has become more widely tolerated, however, not because there are fewer actual cases.

As is fitting for the workshop of the world, Zhang commissions other artists to paint the pink-tinted portraits cheaply, some of them more skillfully than others. Paradoxically, the cumulative effect of tier upon tier of faces is a sort of faceless assembly line of corruption.

The Chinese public hears headlines about fighting corruption every day, and a new four-book series extolling the morality of government officials has just been issued as a new plank in the fight against graft.

But in fact, official figures from the National Bureau of Statistics show fewer corruption investigations than a decade ago. In 2010 — the last year for which figures are publicly available — just 3,603 people were investigated for the misappropriation of public funds by the Chinese procurator's office, compared with 11,068 people investigated on the same charge 10 years earlier. The number of corruption investigations by the procurator's office has declined by 26 percent over the decade.

An official People's Bank of China report posted online last year, then hastily deleted, estimated that around $125 billion had been stashed overseas since the mid-1990s, by at least 16,000 officials, who had subsequently fled overseas.

Before, we were cheated without knowing. Now, we know we are cheated. This is the progress we made.

Beijing's Tsinghua University has an Anti-Corruption and Governance Research Center. Since August 2009, it has developed a China Corruption Measurement Index. But requests for an interview on the subject were turned down by the professor in charge, Cheng Wenhao, due to the "sensitivity" of the topic.

"It's corruption of the worst kind," says Minxin Pei, professor of government at Claremont McKenna College in California, who says the corruption has become collective and collusive in nature. "In academic jargon, we call this 'looting.' "

A few years ago, Pei made a very rough estimate of the cost of corruption in China, conservatively speaking, putting it at about 3 percent of GDP — in line with a 2004 World Bank study about levels of corruption worldwide.

In a $7 trillion economy like China's, Pei says that would amount to more than $200 billion of wealth stolen every year. 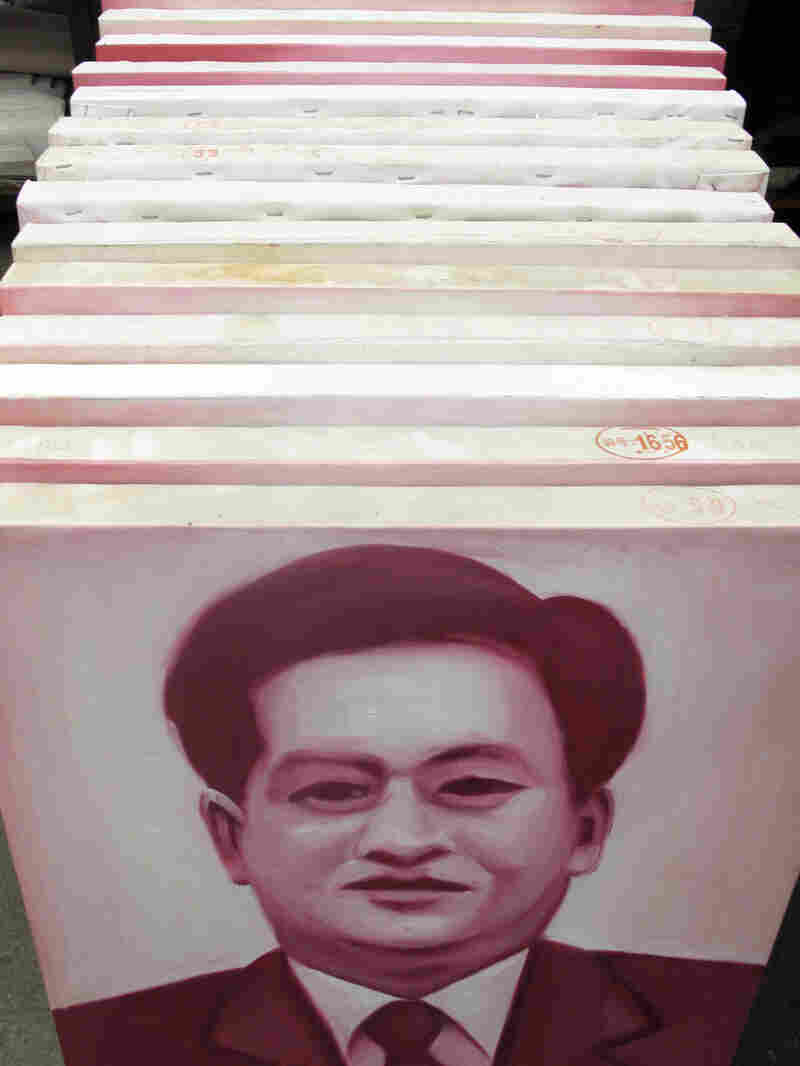 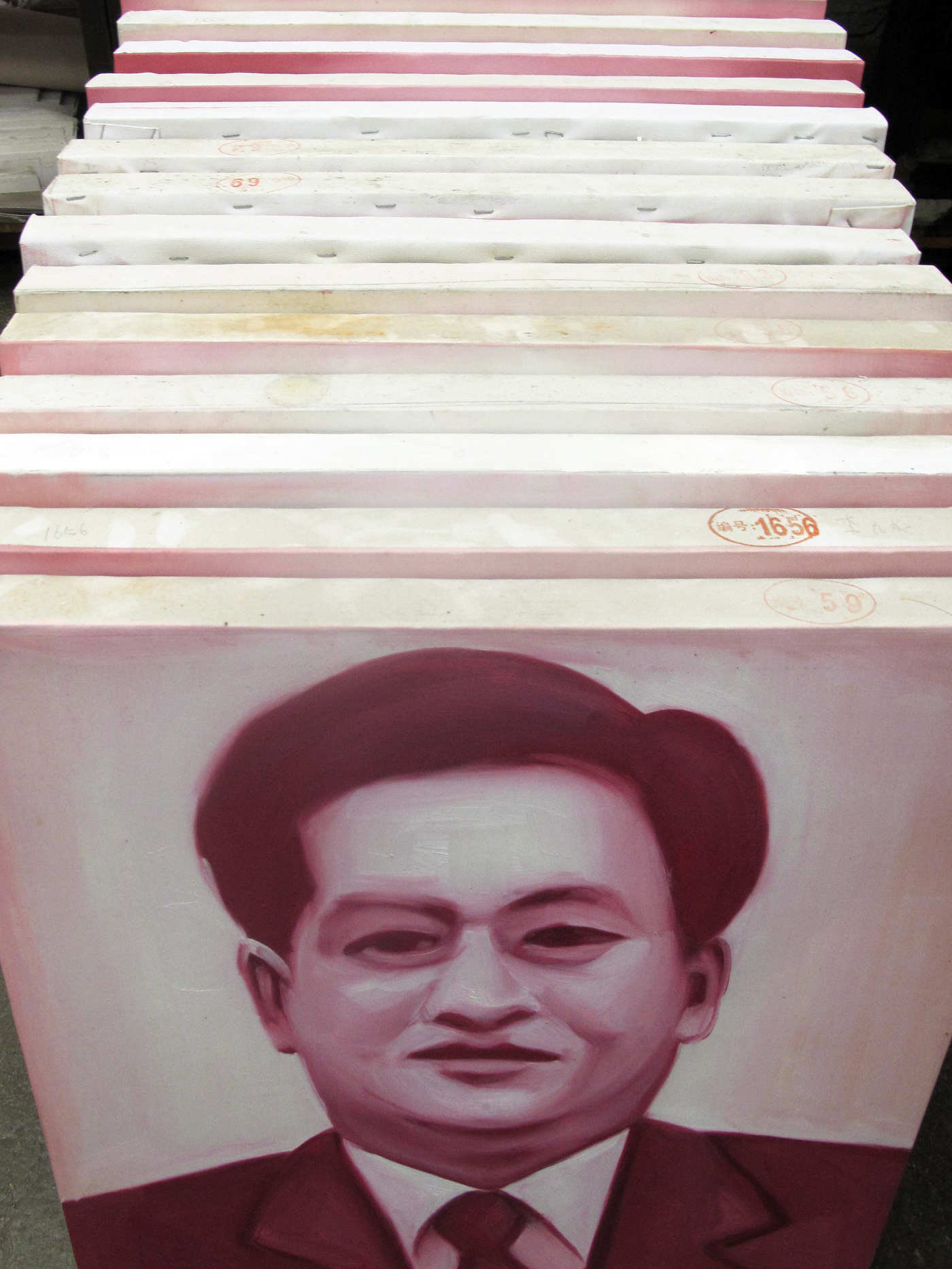 Zhang has already commissioned 1,600 portraits of corrupt officials. They are painted by different artists in southern China.

"As long as the economy keeps growing, it may be able to finance the cost of corruption," Pei says. "The real challenge is when the economy slows down, then corruption becomes a real drain on society."

There are signs that the economy is cooling now, with growth for the first quarter of 2012 slowing to 8.1 percent, the slackest pace in three years.

But the state-run media now appears to be sending mixed messages on corruption. An editorial published in May in the Global Times argued that stamping out corruption would send the whole country into "pain and confusion." This caused a firestorm online, after being posted under the headline "China Must Permit Moderate Corruption, the Public Should Understand," which was criticized as "misleading" and "malicious" by Hu Xijin, the paper's editor-in-chief.

However, the editorial did note: "There is no way in any country to 'root out' corruption. Most critical is containing it to a level acceptable to the public. And to do this is, for China, especially difficult."

It was followed last week by a People's Daily editorial, which labeled it "extremist" to criticize China just because corruption exists.

"Now the party probably thinks corruption is less of a threat than losing legitimacy by exposing how corrupt this government is," Pei says. "In other words, it has to choose a lesser evil."

China touts a harmonious society, but growing online anger at corruption is souring that harmony. Among retirees having their daily sing-a-long session in a Beijing park, however, there's surprising tolerance toward corruption, which is seen as a fact of life.

"No matter which dynasty, these problems have always happened," says singer Xu Yonghua. "You have to look at this fairly, not judging it with hate."

The Upside To Corruption

According to Pei, government statistics show only 3 percent of officials investigated by the Communist Party's anti-graft watchdog are handed over to the judicial authorities. So, only a tiny minority are punished. And while there is discussion about corruption, artist Zhang Bingjian can't find anywhere to show his work.

"I tried to contact galleries, museum, no response. People get scared, even me, you know. It's understandable. Timing is not right to show this piece," Zhang says. "Fortunately we get Internet. People will start to know that."

But Zhang has already been ordered to take his pictures down from his blog. Despite this, he says, his Hall of Fame shouldn't be seen as an indictment of China. The fact that these cases are made public, he believes, makes this a work not of desperation but of hope.

"Before, we were cheated without knowing," he says. "Now, we know we are cheated. This is the progress we made."