Accessibility links
This Chef Loves Her 'Pig,' From Nose To Tail April Bloomfield says she loves the smell of frying liver, the taste of a good thick steak shared with friends, and the crunch of a crispy fried pig's ear. Her new cookbook is a paean to meat — and from snout to tail, every part of the animal appears on her dinner table. 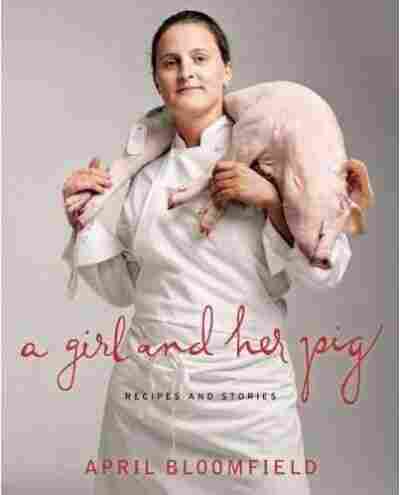 A Girl and Her Pig

Chef April Bloomfield appears on the cover of her new cookbook, A Girl and Her Pig, glowing in her neat chef's whites, with a dead pig slung over her shoulders.

"I adore pigs, and I love eating them and cooking them, and I love using the whole animal," Bloomfield tells NPR's Linda Wertheimer. There are all kinds of recipes in her cookbook, for salads and baked goods ... but meat takes center stage.

"I love it — in moderation. You know, I'm not the type of person to eat big hunks of meat. I think people are starting to realize that great things come in small batches," she says — and she adds that her titanic 4-pound rib-eye steak recipe, for example, is meant to feed as many as four people.

"I like cooking the biggest steaks. It cooks nice and evenly when it's that thick, and you're not eating the whole thing yourself, which is nice. You get to share that with a companion," Bloomfield says.

The book also features plenty of spicy sauces to go with the big hunks of meat. For beef, she recommends an Argentine sauce called chimichurri. "It's got chopped habaneros, which are nice and spicy, which kind of cut through the fat of the rib-eye."

The star recipe in A Girl and Her Pig is, of course, an entire suckling pig. "That's a real simple recipe," Bloomfield says. "That's basically just seasoned an hour in advance and then thrown into a hot oven ... and then you can just leave it, and it kind of tends to itself ... so when it actually comes out of the oven it's all crisp and steaming, and it fills your house or your apartment with this delicious, sweet, porky aroma."

Bloomfield really does use the whole animal — and not just in the form of a suckling pig. One part of the book is called "The Not-So-Nasty Bits," which exemplifies her nose-to-tail philosophy, though it's not for readers who shy away from the idea of eating ears.

"I love anything crispy so, you know, it's very natural for me to have crispy pigs ears," she says. "It's basically like a big, crispy, sticky pork scratching, really." Bloomfield serves the fried ears on a salad of bitter greens with a lemon and caper dressing. "It sounds heavy, but when you eat it, it kind of refreshes your palate."

Liver is another of Bloomfield's favorites. "I love the smell of frying liver," she says. "It kind of releases a sweetness into the air, and it kind of prickles your nose, and it kind of makes you awake ... it gets me excited," she laughs.

This is my homage to Fergus Henderson, a friend and a chef I've learned so much from. His food is simple but succeeds because of the little details. I remember having a lovely shrimp and white cabbage salad at St. John, one of his restaurants in London. What really got me was how it had just enough chervil to make you wonder, "What is that herb?" Fergus thinks about that kind of thing, how to cook food that makes you wonder. In his first cookbook, The Whole Beast, he writes that for his signature bone marrow with parsley salad, there should be just enough capers so you end up searching for them, like the raisins in raisin bran. I love that. It might sound like a small thing, but it's the difference between giving people what they think they want and giving them what will be truly amazing.

He loves using stuff like capers and lemon to give you relief when you're tucking into something fatty like pig's ear, which is crunchy and sort of sticks to your teeth like peanut butter. In this salad, the dressing, with the intense pops of tartness from the lemon segments, makes you want to eat more pig's ear, and its salty cartilage and fat makes you crave more dressing.

I love eating the salad chilled — the greens and dressing — which makes it refreshing despite that fried cartilage and fat. Using whole ears adds a bit of fun, though that might be too much for some. You can always cut the ears into long strips while they're cold, then fry them the same way. Serves 4. 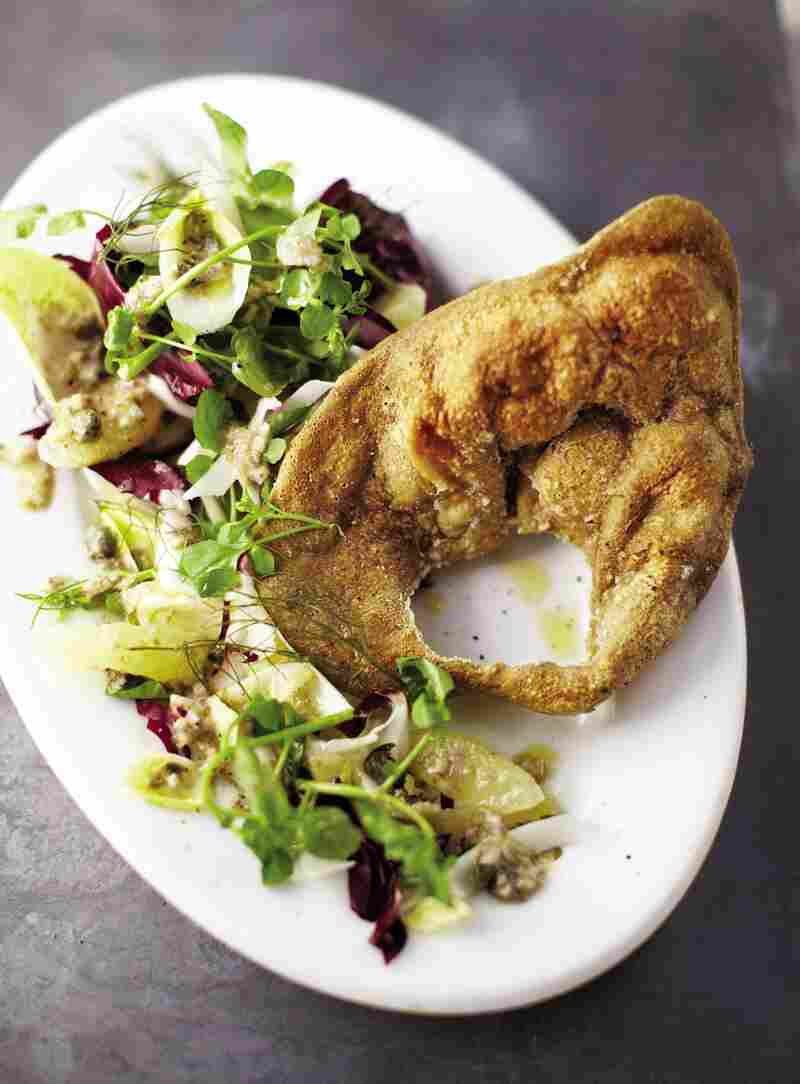 A small handful of arugula

Make sure your pig's ears are free of hair. Remove any that you spot with a sharp knife or razor. Put the ears in an ovenproof saucepan with a lid that holds them snugly, then add enough duck fat to cover them. Cut out a circle of parchment paper that'll cover the ears, put it on top of them, and top it with a saucer to weigh them down. Cover the pan, put it in the oven, and cook just until the ears are so tender that when you give them a firm pinch, your fingers meet, about 4 hours.

Remove the ears from the oven and let them cool submerged in the fat. Once the ears are cool, remove them from the fat, wipe them off, and pat them dry. (Strain and reserve the duck fat for another use.)

Meanwhile, separate the leaves of the endives and treviso or radicchio. Put them in a large bowl, cover with plastic wrap, and put the bowl in the fridge. (I love the contrast between the cool leaves and the hot pig's ear.)

Pour the peanut oil into a deep fryer and heat to 350°F. (The amount of oil will depend on your fryer's capacity.) I don't recommend doing this in a fryer without a lid, because the oil will pop, spit, and spatter like mad. Try not to be alarmed. Gently add 1 ear (or 2 if you have a larger fryer), immediately close the lid, and fry until deliciously golden brown, about 8 minutes. Transfer to paper towels to drain and season right away on both sides with salt. Keep the ear(s) somewhere warm, like a toasty spot near the stove, while you fry the rest.

Take the bowl of endive from the fridge. Sprinkle 5 tablespoons or so of the chilled dressing over the leaves, making sure it gets into all the curves. Add the arugula and mix gently but thoroughly with your fingers, so the lemon segments in the dressing stay more or less whole but every leaf gets some dressing.

Put the greens on a platter, top it off with the warm, crispy ears, and add a little more dressing, if you fancy.

Note: All recipes should be cooked with care, but that's especially true in this case, because you're frying in hot fat. Fortunately, nowadays you can buy affordable fryers with thermostats and lids, which makes things much easier. I strongly suggest you invest in a fryer with a lid, whether you mean to make this recipe or you're just a fan of frying.

This is one of the first recipes I ever came up with myself, back when I worked at The Brackenbury in east London. What I liked about it then and still do today is that each bite delivers little explosions of flavor – salty hits of caper, tart blasts of lemon, sharp little hits of mustard, and an edge of shallot, all rounded out by an almost undetectable pinch of sugar. Finely chopped parsley is a welcome addition. I love to serve it with fatty foods, like Fried Pig's Ear Salad. Makes about 1 cup.

Segment the lemons. Squeeze the juice from the membranes into a separate bowl, add the rest of the ingredients, and stir well. Add the lemon segments and toss gently to coat them without breaking them up. Use straightaway or chill in the fridge, covered, for up to an hour

From A Girl And Her Pig, copyright 2012 by April Bloomfield. Reproduced with permission from Ecco, a division of HarperCollins Publishers.