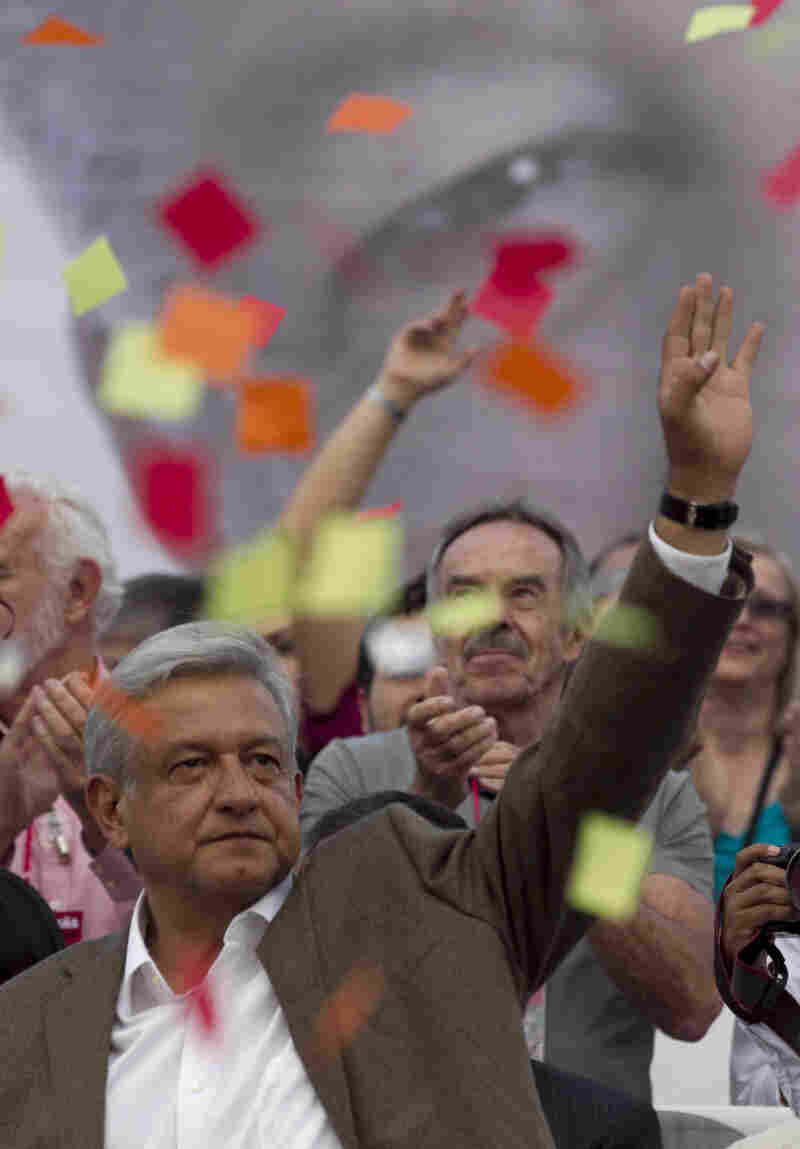 Andres Manuel Lopez Obrador, presidential candidate for the Democratic Revolution Party, waves at supporters during the closing rally of his campaign at the main Zocalo plaza in Mexico City on Wednesday. Esteban Felix/AP hide caption 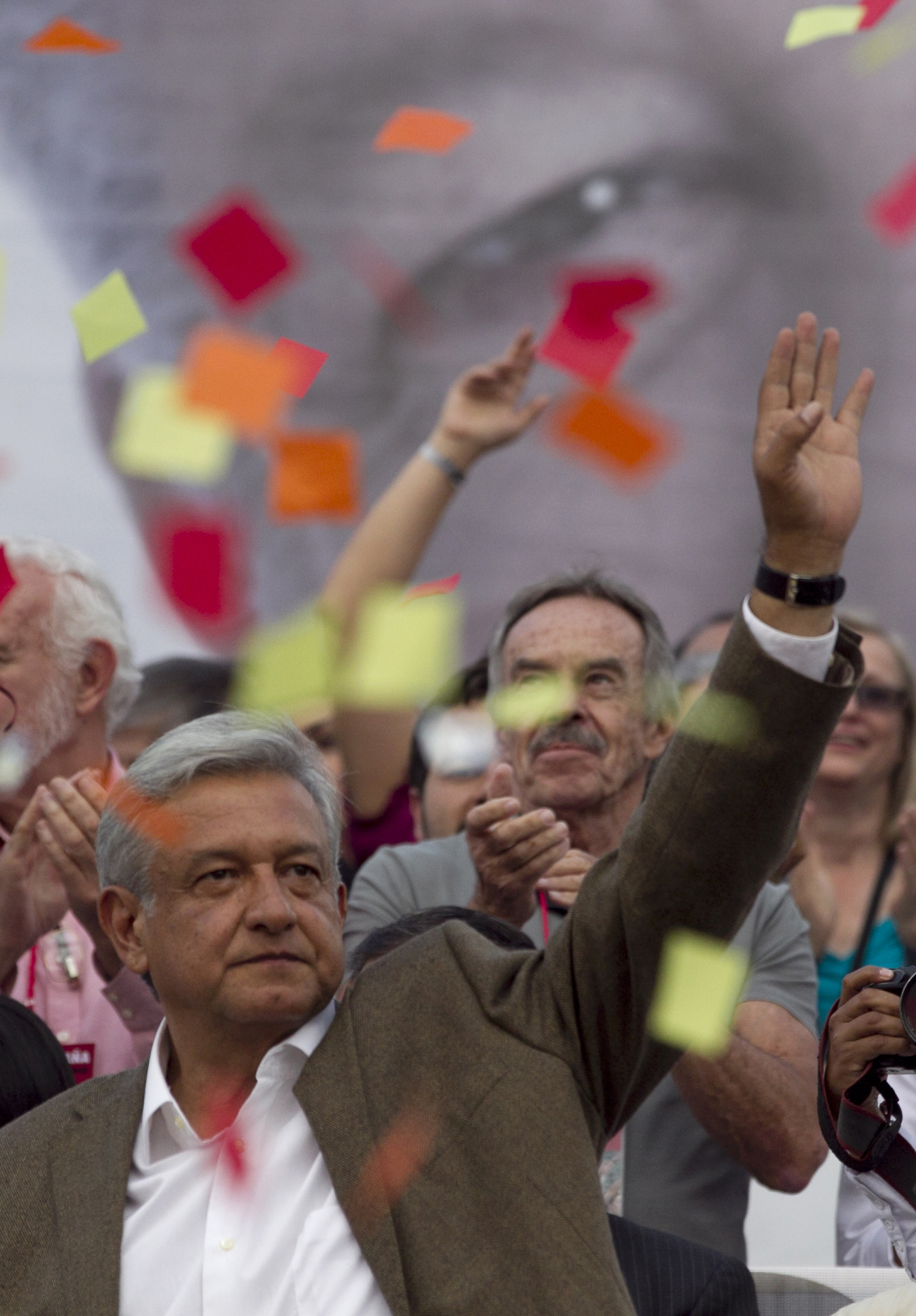 Andres Manuel Lopez Obrador, presidential candidate for the Democratic Revolution Party, waves at supporters during the closing rally of his campaign at the main Zocalo plaza in Mexico City on Wednesday.

With just two days left before Mexicans elect a new president, polls show that the candidate of the former ruling party is poised to win the race by a wide margin. But there are those who don't want to see a return of the PRI, which ruled Mexico for more than 70 years until 2000 with a mix of corruption and cronyism. They say their best hope is leftist PRD party candidate Andres Manuel Lopez Obrador.

Lopez Obrador has been a central figure of the Mexican left for years. He protested the PRI's authoritarian rule in the 1980s and '90s and won Mexico City's mayoral race in 2000. This is his second run for the presidency. He lost in 2006 by less than a percentage point. This time around, polls show he's in second place.

This week, Lopez Obrador held his campaign's largest event with a march down Mexico City's Reforma Boulevard to the historic downtown Zocalo plaza where more than 100,000 crammed into the massive square and waited hours to see him.

Dolores Juarez, a Mexico City dentist, says she's not interested in the PRI's candidate and current front-runner, Enrique Pena Nieto, who is greatly admired for his youth and good looks.

"I'd rather have someone with experience and honesty," she said.

Manuel Salinas, 75, held up a handmade sign deploring current President Felipe Calderon's six-year-long war on drug traffickers. He said there's been too much bloodshed and too many innocent people killed, adding that Lopez Obrador will do better.

But like the other candidates in the race, Lopez Obrador has been light on specifics for how he would end the drug war that has claimed the lives of more than 50,000 people. He told the crowd the fix for Mexico's current ills is to create opportunities and stop corruption.

"We will do this by having incorruptible and honest public servants who will work more efficiently, intelligently and with perseverance," he said.

Lopez Obrador says he will do the same housecleaning to repair Mexico's economy and proposes balancing the budget by cutting politicians' salaries.

Critics say his economic proposals are too radical; they compare him to Venezuela's leftist President Hugo Chavez. 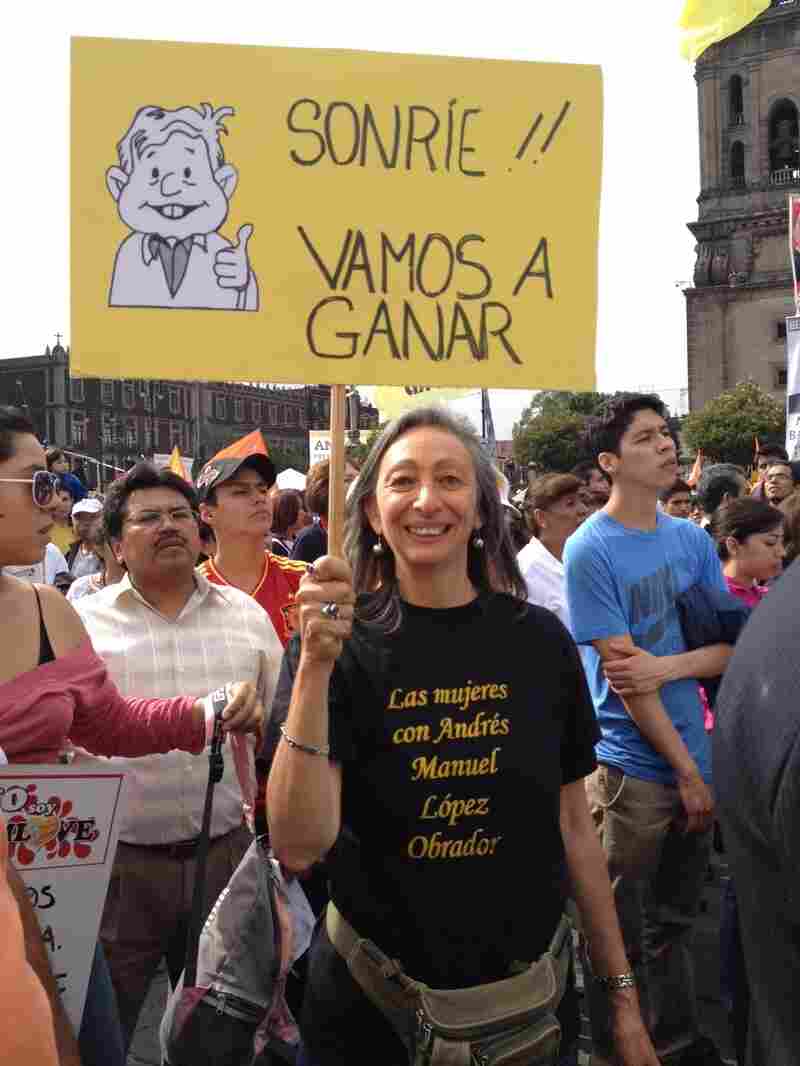 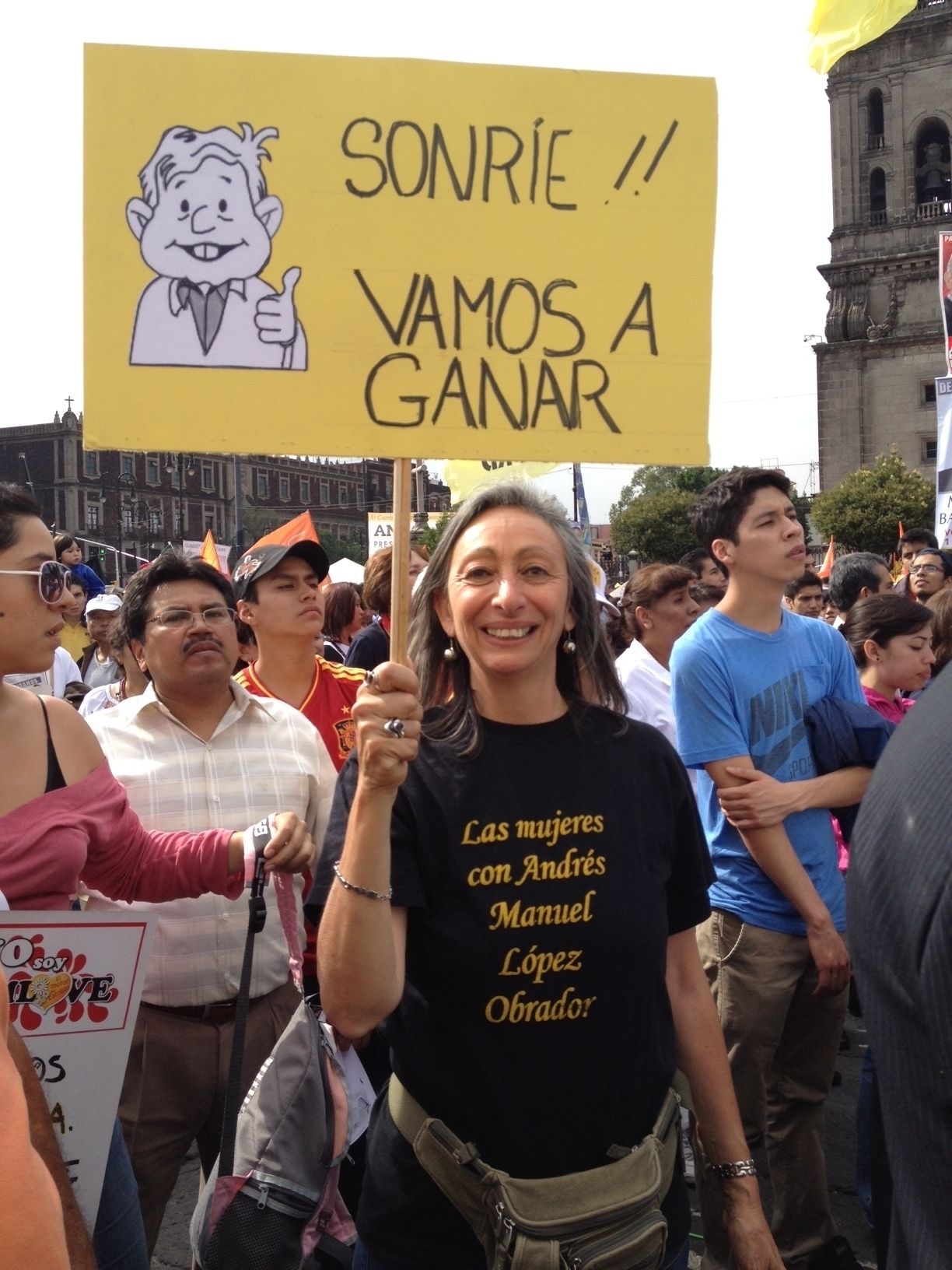 Supporters of PRD party candidate Andres Manuel Lopez Obrador at a rally this week in Mexico City. Lopez Obrador, a leftist, is trailing in polls ahead of Sunday's presidential election.

Political analyst Denise Dresser doesn't go that far but says Lopez Obrador lacks viable solutions. "He's not a man who understands how an economy works," she says. "He is averse to dismantling monopolies because he is basically a statist at heart."

Lopez Obrador has tried to tone down his usual combative rhetoric. He campaigns on building a "republic of love" and calls for "abrazos no ballazos" — hugs, not bullets.

"He started talking about peace, love and reconciliation just four months ago, and no one really believes Lopez Obrador could change so abruptly," he says.

Crespo says most people remember the weeks following Lopez Obrador's razor-thin presidential loss in 2006. Supporters clogged the streets of the capital for weeks while he proclaimed himself Mexico's legitimate president. Now there's concern about whether he will accept this year's results. In speeches he has talked of potential voter fraud and urged supporters to be vigilant, but on Thursday Lopez Obrador and the other major candidates signed a civility pact pledging to respect this Sunday's election results.