Accessibility links
'Anti-Cheating Ring' Not Likely To Deter History A wedding ring that proposes to imprint "I'M MARRIED" on a would-be philanderer's finger is sparking a lot of attention — and outrage. I'm merely skeptical. 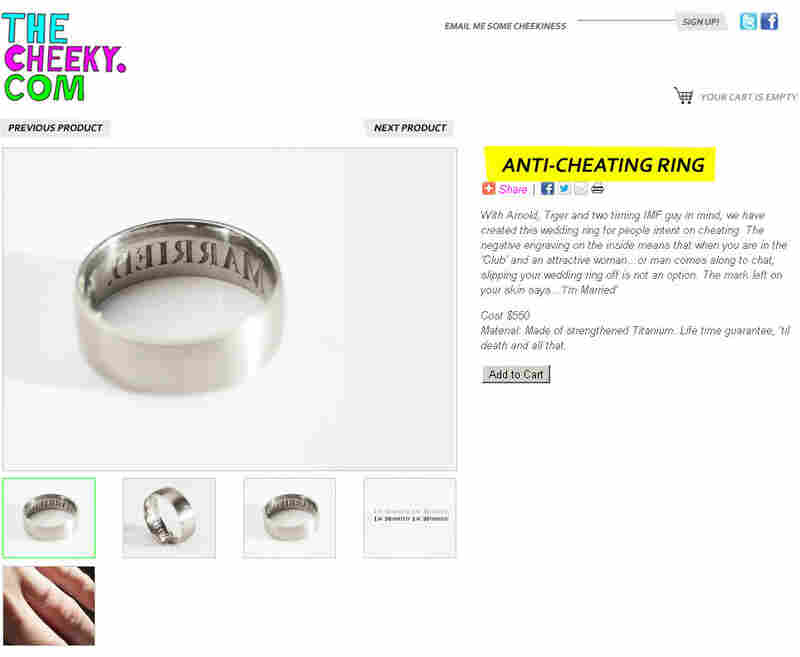 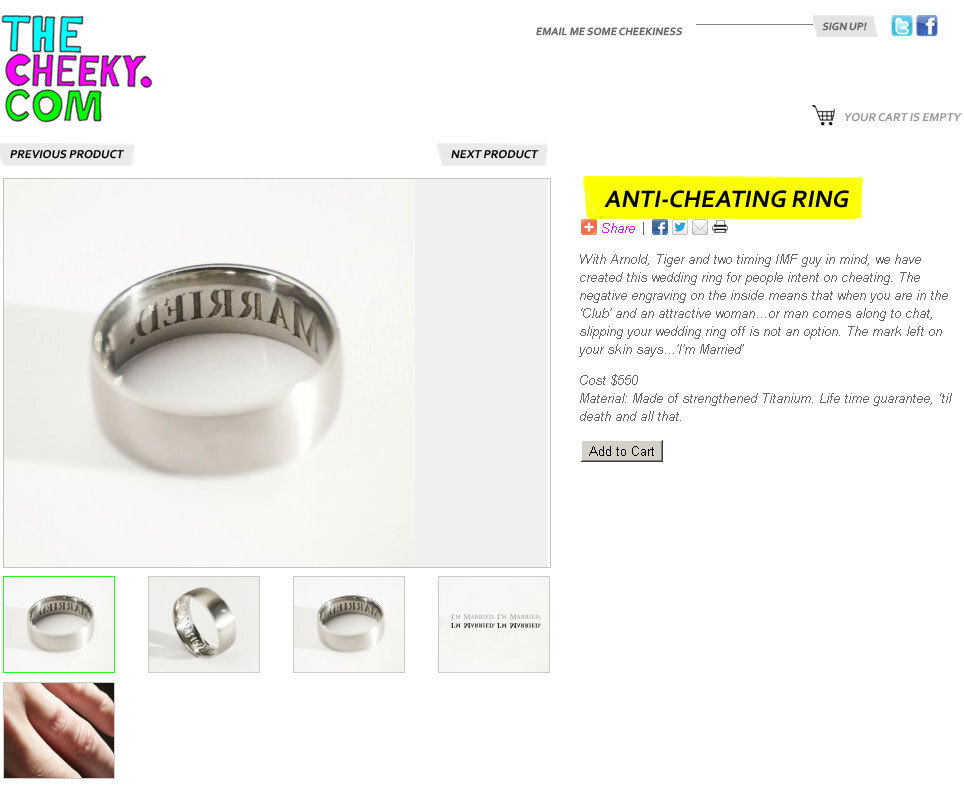 A wedding ring has been getting a lot of attention this week.

TheCheeky.com is selling what it calls an "Anti-Cheating Ring." It appears to be a plain wedding band made of titanium, engraved with big block letters on the inside that will imprint "I'M MARRIED" around your finger.

TheCheeky.com, which lists the ring for $550, says, "With Arnold, Tiger and two timing IMF guy in mind, we have created this ring for people intent on cheating."

So should someone go on the road, nip into a bar, slip off their wedding ring, and try to present themselves as single, bold letters pressed into their longing-to-philander ring finger will proclaim that they're married.

TheCheeky.com has drawn a lot of public outrage for selling the ring. I'm merely skeptical.

Any couple who feels they have to have their marital status branded on their flesh like Texas longhorns to guarantee good behavior should probably ask themselves if they really ought to get married.

Besides, I wonder if this branding ring just wouldn't have the reverse effect.

Reille Hunter has written a book, sort of, in which she says that when they first got involved, John Edwards told her he had already had three mistresses, stationed in Illinois, California and Florida.

His claim to having multiple mistresses, in states with a plenitude of electoral votes, may merely be pre-pillow talk. But the idea that John Edwards owned up to having a three-ring circus in his personal life while he was already married to one of the most admired women in America apparently did not deter him or Reille Hunter from philandering.

Has it ever? Let's review a little history. In fact, let's just review history.

Did Richard Burton and Elizabeth Taylor really think one another single and unattached? For that matter, did the real Cleopatra think Julius Caesar was a footloose Roman bachelor? Did Anne Boleyn ever bellow at Henry VIII, "Married? You never told me you were married!"

Did Monica Lewinsky think President Clinton lived in the White House just with Socks and Buddy, his cat and dog? Did the Prince of Wales ever tell Camilla Parker-Bowles while they dallied, "Oh, that indentation around my ring finger? It's from my polo mallet!"

We could go on. For some people, wedding rings are merely bells that ring out, "Yoo hoo!"

I don't know if many people will actually order this wedding ring, whatever publicity it receives. As several people said to me this week: If you're looking for an iron ring to discourage straying, there are better places to put it than a finger.