Accessibility links
Synthetic 'Bath Salts' An Evolving Problem For DEA The compounds in the street drug known as "bath salts" aren't necessarily illegal, and they're constantly changing — allowing drug makers to stay one step ahead of law enforcement. So the Drug Enforcement Agency decided to make its own bath salts to better understand the drug. 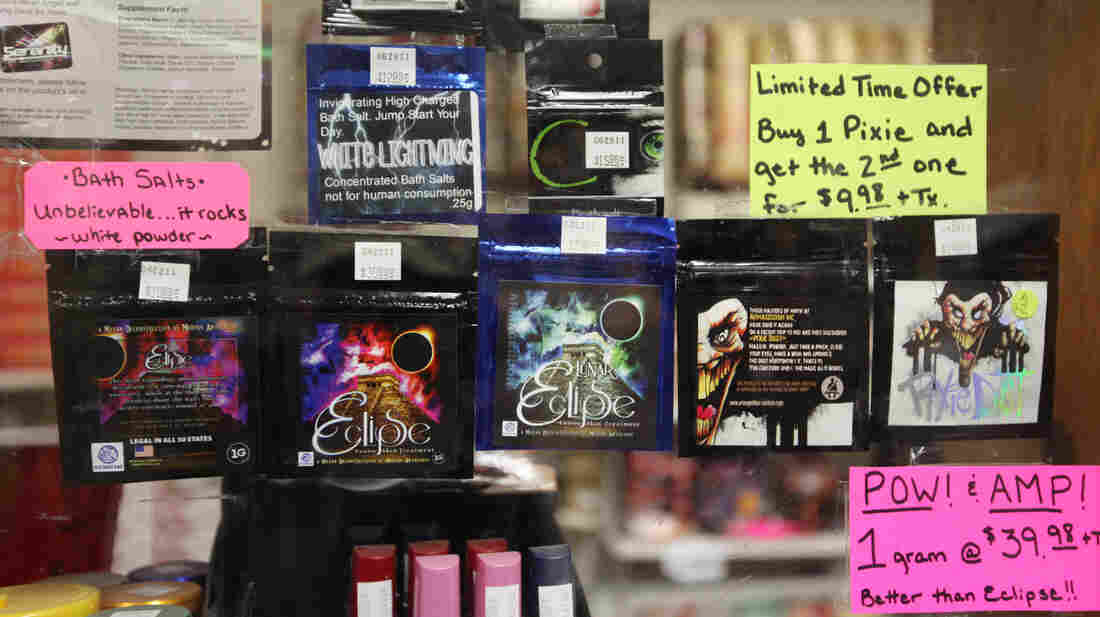 Use of synthetic "bath salts," compounds sold legally but used as a controlled substance, has been on the rise since 2010. Brian Peterson /Minneapolis Star Tribune hide caption 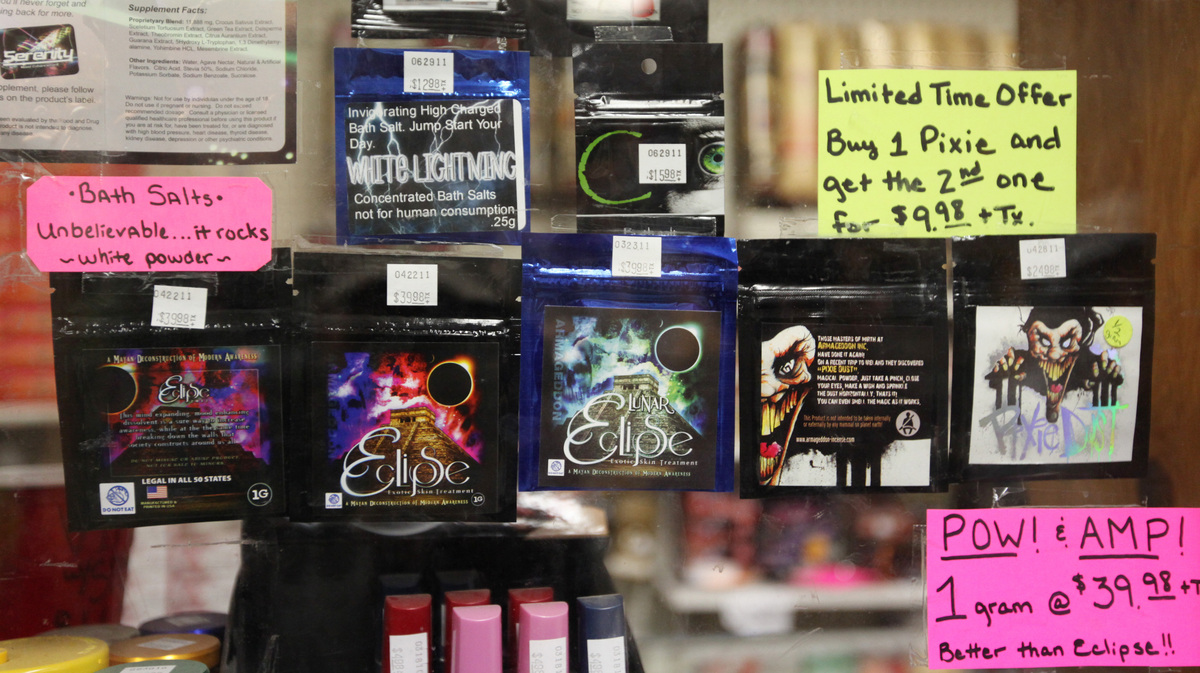 Use of synthetic "bath salts," compounds sold legally but used as a controlled substance, has been on the rise since 2010.

One night a little more than two years ago, a 24-year-old man was rushed into the emergency room at Tulane University Medical Center in Louisiana. He was extremely agitated and hallucinating.

Dr. Corey Hebert figured the man was on drugs, probably PCP or a stimulant. But a few minutes later, the man became paranoid.

"He started doing some self-mutilating actions [and] was pulling out his eyebrows and eyelashes," Hebert tells weekends on All Things Considered host Laura Sullivan.

There's no legitimate use for these particular compounds that we know of.

Hebert then thought maybe the patient had taken methamphetamine, but his symptoms changed again. Even more surprising, a drug scan of the patient showed up clean. Hebert and his colleagues were puzzled.

After talking to the man's friends, Hebert learned he had taken a new drug that goes by the street name "bath salts."

The synthetic drug's popularity has been growing. National poison control centers had 304 calls about bath salts in 2010, nearly a third of them from Louisiana. Last year, there were more than 6,000 calls.

The problem is that bath salts — which have nothing to do with the crystals you'd put in your tub — aren't one kind of drug or something you can test for and treat.

Unlike a drug like cocaine, which is made with a natural process, bath salts are made in a lab and constantly changing. The drug is designed specifically to skirt the law and test the bounds of new chemicals — with often deadly results.

"Cocaine is cocaine ... all the time, and it's always illegal," says Jill Head, a senior forensic chemist with the Drug Enforcement Agency. "But these products are continuously changing ... so what we see this week can be very different from what we're going to see a month from now."

This is a problem for police, prosecutors and the DEA, which is trying to track what the drugs are and where they come from.

Making matters worse, the compounds in the drugs aren't necessarily illegal. Because the components keep changing, drug makers can stay one step ahead of law enforcement. Even on a rush basis, it can take months to get a compound banned as a controlled substance. The DEA has gotten three compounds put on the list so far, but the agency's chemists have identified more than 60 in the past two years.

"Basically, we're playing whack-a-mole," says Arthur Berrier, a senior research chemist for the DEA. "They make one drug ... or one compound, and we smack it down, and the next week, something else pops up."

Now the scientists at a DEA lab in Northern Virginia are doing something unusual: They're making their own bath salts.

Berrier tells Sullivan that in order to fully identify a compound, scientists need what is called standard material, or an authenticated drug with a known structure.

"So typically what we would do is if we identify something in a bath salt material, we'd have to have a standard [to compare it to] to really identify it," he says.

The compounds scientists are finding are generally legal compounds not specifically controlled by the DEA, Berrier says. They show up in gas stations, pipe shops and all over the Internet as plant food, incense, hookah cleaner and, of course, bath salts.

Berrier says sometimes store owners know that what they're selling is really drugs, but sometimes they don't. The key for drug seekers is small packaging and the phrase "not for human consumption," which is supposed to hint at the opposite.

"[But] there's no legitimate use for these particular compounds that we know of," Berrier says.

What DEA chemists are doing in beakers, bath salt makers are doing in vats. Officials believe many of those facilities are in China, India and Pakistan. Producers ship the drugs in bulk to the U.S., where officials suspect the final mixing and packaging is done.

To try to bring criminal cases against suppliers, sellers and users of what are essentially legal compounds, the DEA and prosecutors have had to reach way down into the annals of the nation's drug laws.

DEA lab director Jeff Comparin tells Sullivan that the challenge is that if a substance is not specifically listed in Title 21 of U.S. Code, which governs food and drugs, it can be classified as legal — but there's a loophole.

"Because of the nature of the structure, the way the chemicals are designed, the controlled-substances act also has a clause called the 'analog' part, where we can try these chemicals as if they were a controlled substance," Comparin says.

That means the agency can try to show the user or supplier intended to ingest or sell the product as a drug — usually through circumstantial evidence. Comparin says the DEA has successfully prosecuted some analog cases.

This trend of synthetic drugs is new and developing, Comparin says, and it's hard to say how long it will last.

"Who's to say what effect the ultimate control of these chemicals will have on their continued manufacture, importation and trafficking in the U.S.?" he says. "But as you can see right now, we just detect the new compounds and address the threat as best we can."

Just this week, Congress moved to ban more of the compounds the DEA's lab has identified. In the meantime, officials are hoping users will realize that if scientists in the nation's drug lab can't keep up with what drug manufacturers are making, users shouldn't be so sure what they're getting.