Accessibility links
An Abbey's Run-In With Law On Who Can Sell Caskets A law in Louisiana stopped monks at St. Joseph Abbey from selling their wood caskets in the state. That law is just one of dozens of antiquated and possibly monopolistic laws that pervade the nation's funeral industry. But for the first time in decades, the laws are facing new scrutiny as consumers become more aware of their rights. 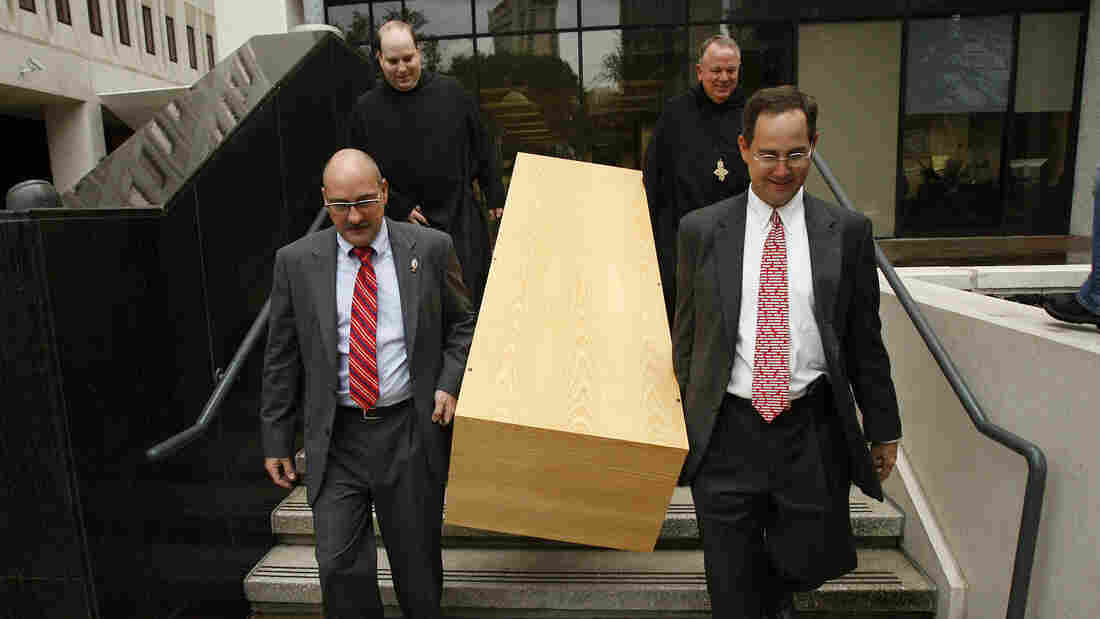 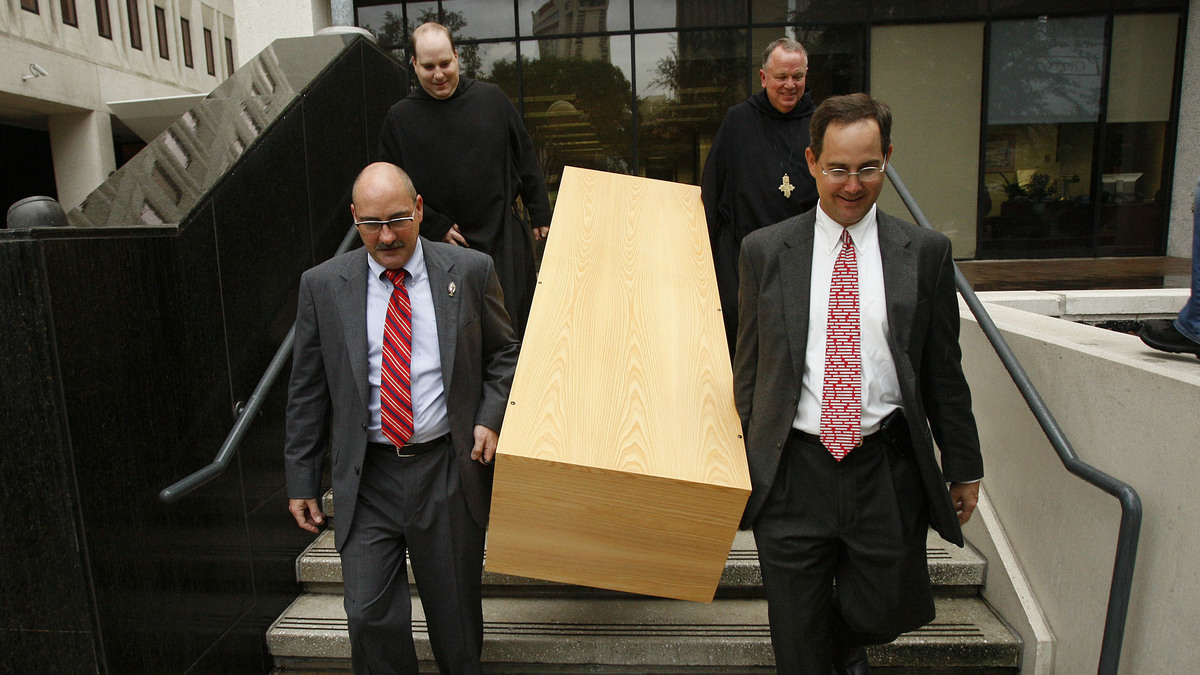 Monks set up St. Joseph Abbey in Louisiana more than 100 years ago. They've been there so long, they have 1,100 acres and their own town, St. Benedict.

For all those years, when one of the brothers died, the monks would painstakingly craft a flawless pine casket in their woodwork shop.

Over the years, many clergy members and high-ranking church officials would request the the beautiful caskets. Soon, members of the public wanted see if they might be able to buy one.

You could go online right now to Wal-Mart and buy a casket, and it's perfectly legal, but we couldn't sell them to our own next door neighbor.

So Deacon Mark Coudrain brought the idea to the abbot and asked if they'd consider making the caskets to sell. They did, and in 2007 the monks opened a 5,000-square-foot woodshop in the abbey, which Coudrain now runs. All the money from the caskets would go to support the abbey and charitable causes.

Everyone seemed happy, but before they could sell a single casket the abbot called Courdrain with bad news.

"[He] said, 'You better sit down, I got a letter and it says we need to stop making them because it's illegal in Louisiana,'" Coudrain tells weekends on All Things Considered guest host Laura Sullivan.

The reason: You have to have a funeral home license in Louisiana to sell caskets to residents in the state.

"We can certainly make them, and we can sell them to anybody in the world except other residents of Louisiana," Coudrain says.

Louisiana's law is just one of dozens of antiquated and possibly monopolistic laws that pervade the nation's funeral industry. For the first time in decades, the laws are facing new scrutiny as consumers become more aware of their rights and even funeral homes want to change.

It's hard to know just how many other states only allow funeral homes to sell caskets to state residents because there's little federal law or oversight that regulates the industry. It varies by state, and sometimes it varies depending on how politically powerful each state's funeral homes are.

"Many state regulations are regulations lobbied for by the funeral homes and some of them can be anti-competitive," says Craig Tregillus, the funeral rule coordinator at the Federal Trade Commission.

Tregillus' job is to ensure federal funeral regulations are followed. If you're worried that's a lot to keep track of, don't be. There's only one regulation on the books — from 1984.

"The FTC's funeral rule took effect ... in order to give anyone who arranges a funeral the right to purchase only the funeral goods and services they wanted or needed," Tregillus tells Sullivan.

Tregillus and FTC inspectors have conducted about 2,500 sting operations on funeral homes in the past 15 years just on this one rule — making sure customers get a list at the door and only pay for what they want.

Take caskets, for example, you don't even need to buy one. Each cemetery can make its own rules but there's no law that says you have to use one. There are laws in some states, however, that you can't drink coffee at a funeral home.

It's the kind of thing that drives Paul Elvig, the state liaison for the International Cemetery, Cremation and Funeral Association, crazy.

Going state-to-state to compare various laws that cover funeral homes and cemeteries, Elvig, a former regulator from Washington state, tells Sullivan that he found few similarities between what each state had on the books.

"They're highly unique state to state," Elvig says. "If you look at insurance laws or laws governing real estate, they're very similar ... many times with the same wording. You're not going to find that similarity with funeral and cemetery laws."

As the funeral industry marketplace changes, Elvig says the main point of contention is how much control the consumer should have.

"Should you be able to buy cremation and [not] have to deal with a funeral home?" he says. "What about the cemetery [and its role]? I see divisions in the industry on which way to go."

While Elvig might want to see more uniformity in state regulations, other industry groups aren't necessarily on the same page.

Patrick Lynch, a funeral home operator in Michigan and past president of the National Funeral Directors Association, says states should make their own rules.

Lynch says everyone who sells funeral-related services should have to follow those rules: from the guy on the Internet selling graveside services to a business that provides cremation or even big-box stores like Walmart that sell caskets.

Lynch says this is not about profit; it's about protecting the consumer.

"Not allowing food in funeral homes or not allowing the free marketplace of product sales, those are very isolated incidents," Lynch says. "The greater one, where I believe the federal government needs to take a position, is to say we need consumer protection across the board, not to protect the arena of funeral homes but to protect the consuming public."

For some people though, the rules and regulations aren't even relevant. There are some families in the U.S. that are turning to what are called home funerals.

In 1995, Elizabeth Knox's daughter was killed in a car crash. At the hospital, in despair, she couldn't accept the idea of sending her daughter's body off to a funeral home. A friend told her she should bring her daughter home and let relatives come say goodbye — so that's what she did.

Knox dressed her daughter and had a viewing in her home to let family and friends say goodbye for three days. She then opted for cremation and said the process felt like closure — and maybe a little bit like healing.

"That just would not have been possible in a funeral home," Knox says. "At best we would have had two hours with her in a public place that was not our home." 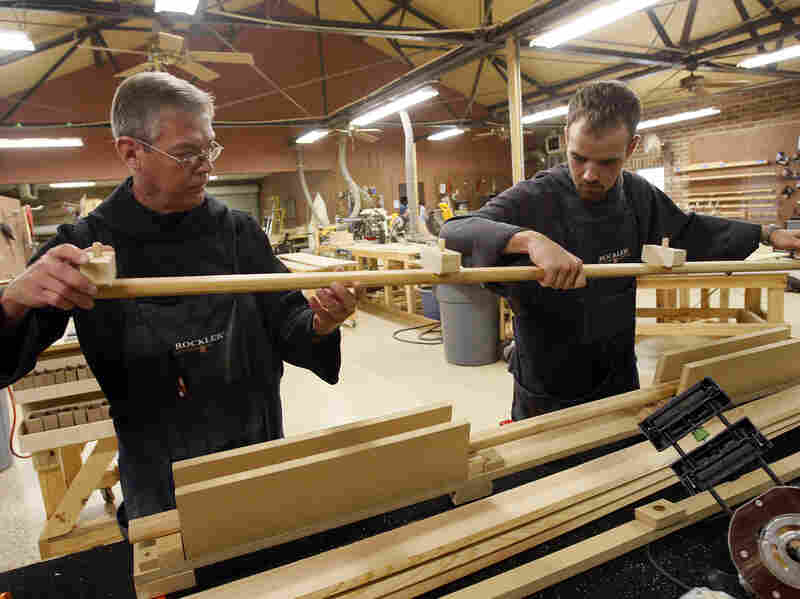 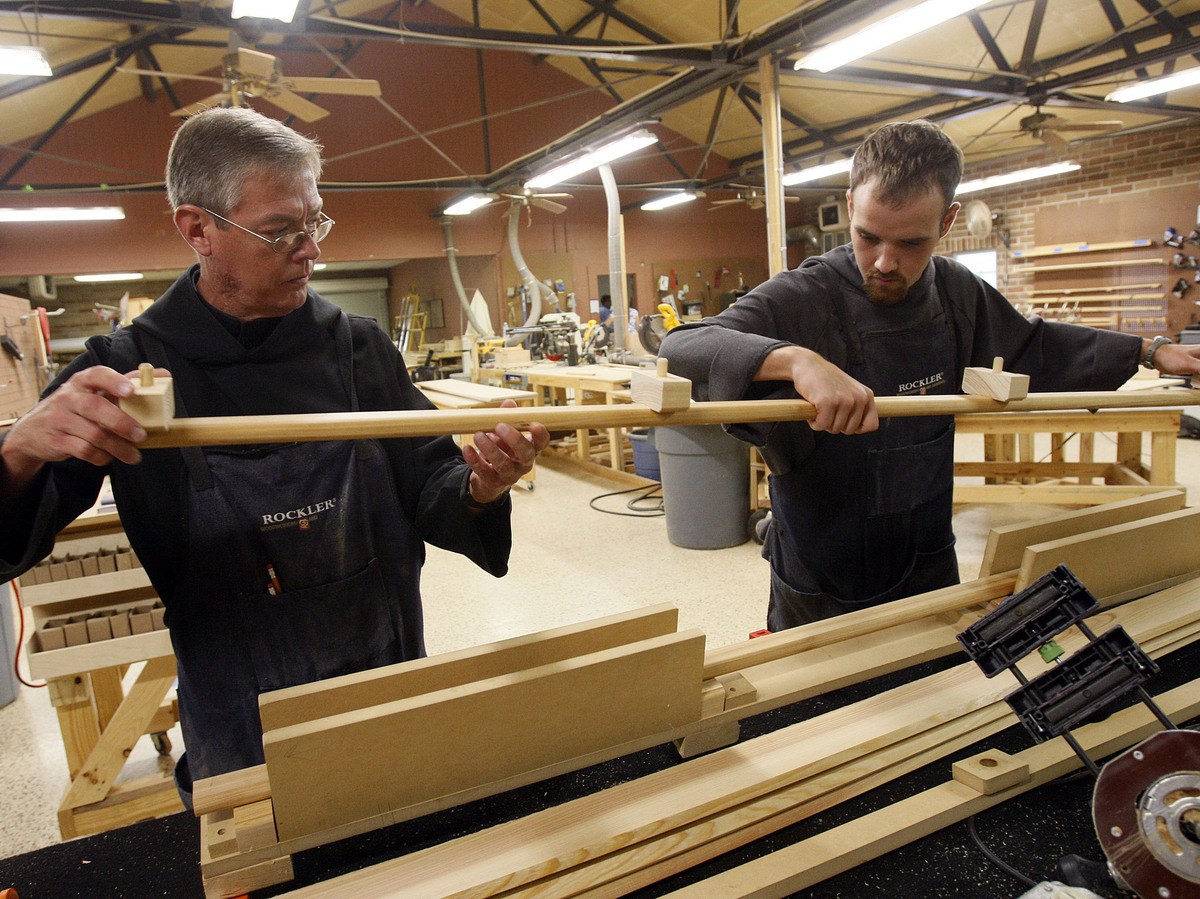 Benedictine Brother Brian Harrington (left) and novice Dustin Bernard pull a casket handle from a press in a workshop at St. Joseph Abbey in Covington, La.

Knox now works in Maryland with other families to show them how to have their own home funeral. Many opt for cremation, but she says it's not hard to find cemeteries that don't require bodies to be embalmed.

For the monks of St. Joseph Abbey and Coudrain, Louisiana's law was a difficult crossroads. Coudrain says the monks didn't want to hurt funeral homes' business, which the decades-old law seemed designed to protect, but they believed in the service they wanted to provide.

"You could go online right now to Walmart and buy a casket, and it's perfectly legal, but we couldn't sell them to our own next door neighbor," he says.

Typically, monasteries don't want to be in the public eye, Coudrain says, but he and the monks decided they wanted to fight the law and see what they could do to make it legal for them to sell their caskets.

So, they fought and won with a federal judge striking down the law. But the funeral home industry in Louisiana has appealed and the 5th Circuit Court will rule on the law in coming months.

In the meantime, the monks are selling their caskets.

"We feel like it was our right to do this, we're not harming anyone [and] there was no health and safety issue," he says. "We're building a box. I mean, yes, it's holding the temple of the Lord, but it's a box."