Accessibility links
Unicorns And Witches And Wild Mood Swings, Oh My! The Black Jewels trilogy flips everything you thought you knew about fantasy on its head. But NPR editor Petra Mayer says it's still a wild ride of mystery, erotica, violence and even true love. What is your favorite book that defies the conventions of its genre? Tell us in the comments below.

Unicorns And Witches And Wild Mood Swings, Oh My!

Unicorns And Witches And Wild Mood Swings, Oh My! 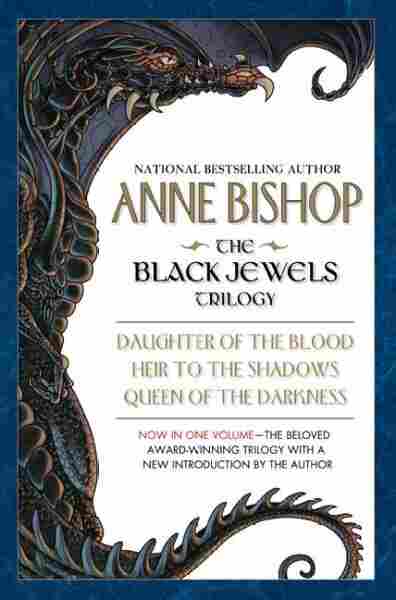 Petra Mayer is an associate editor at NPR Books.

I love the My Guilty Pleasure series, I really do. But here's the thing — I don't think it's nearly guilty enough. It's like saying your guilty pleasure is '50s pulp novels, but only first editions. Or fried chicken, but only from this one perfect stall in the Taipei night market — not actually guilty at all. Except for Gary Shteyngart — dude, call me up and let's talk about Zardoz, because I think you might be my new best friend.

So bring the Cheetos and the cheap pink wine, because I'm about to bring the guilt (though let's not forget the pleasure).

I'm a fervent, if not unabashed, fan of Anne Bishop's Black Jewels trilogy. I reread it at least once a year, and I never tire of the overheated adventures of Jaenelle, Saetan, Daemon and an awful lot of other characters with "ae" somewhere in their echt-fantasy-novel names. And, yes, Saetan is who you think he is — the ruler of this world's version of hell. Warning: mild spoilers ahead!

Bishop actually has an interesting project. She's flipping fantasy tropes on their heads: In this world, the common pairings of good/light and evil/dark have come uncoupled. Power and honor come from the darkness, and only women can rule. Not only that, but the ruling class arises from an inborn magical caste system quite separate from the standard oligarchy — even the poorest village girl can be a queen. And Saetan's a good guy, when you get to know him.

Our heroine is Jaenelle Angelline, the misfit daughter of a noble family. Of course she's blonde, fragile and lovely, and of course her family doesn't understand or appreciate her because she shows none of the standard signs of magical power — but she does claim to talk to unicorns, which supposedly don't exist.

And, of course, as it turns out, Jaenelle doesn't register as a standard magic user because she's just too strong. She's not only a born queen — she's also Witch, the prophesied savioress of this troubled world. Can she make it alive to adulthood and full power?

Well, I'm not spoiling that, but you can probably guess.

Everything, every single thing in these books is deliciously over the top. There are unicorns, and they do talk. There are also magical talking dogs, horses and giant white tigers. And evil witches. And little golden dream-weaving spiders. And harpies and demons and dragons and, for some reason, a lot of really tasty-sounding prime rib dinners.

Bishop's men are a teenager's dream: muscly, gorgeous, attentive, protective, brilliant in bed — also prone to wild mood swings and violence, but only in the service of their queens, who command them absolutely (though if you're an evil queen you might want to be careful). Sometimes they even go mad with emotion and have to be rescued. Fantastic!

The Black Jewels trilogy is pure fantasy Velveeta on a truly epic scale, combined with enough adolescent wish fulfillment to satisfy a classroom full of 10th-graders — though I wouldn't give this series to a 10th-grader.

There's graphic sex and violence, sure, but also misery, redemption, betrayal, magic, forgiveness, male bonding, politics, war, terrible retribution and the truest of true loves. I think of the Black Jewels as my favorite roller coaster — a wild ride full of intense ups and downs, and when it's done, I run right around and get on line to ride it again.

My Guilty Pleasure is produced and edited by Ellen Silva and Rose Friedman, with production assistance from Gavin Bade.