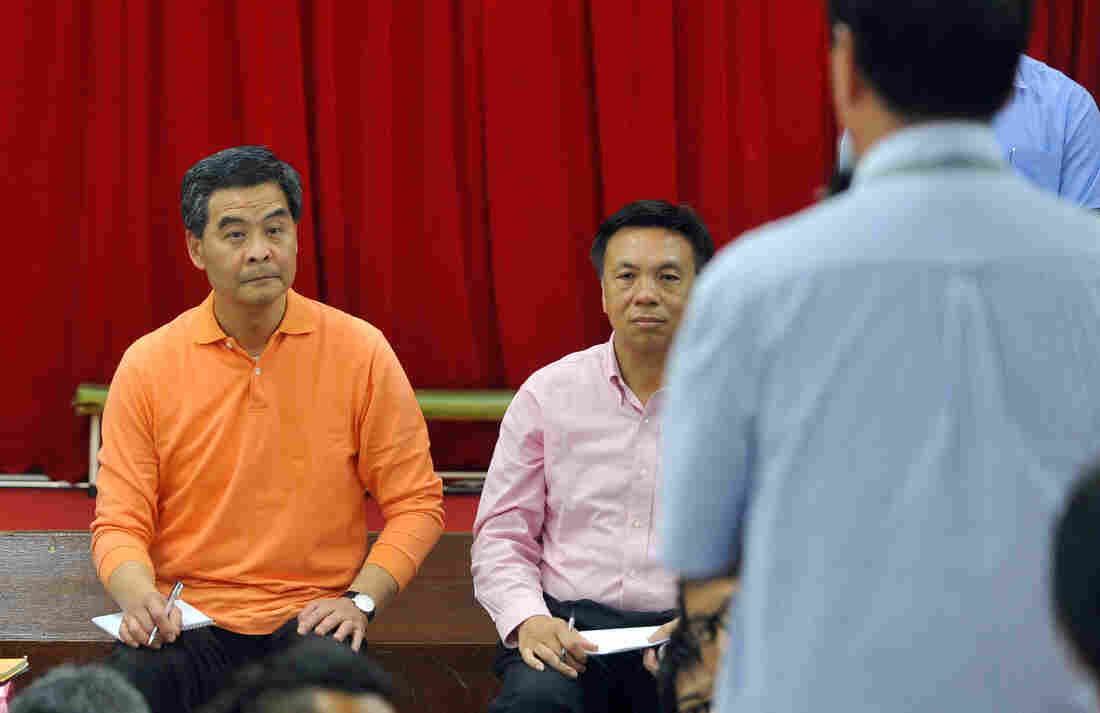 It's a pretty bad first day at work when hundreds of thousands of people march through the streets calling for your resignation. That's what happened Sunday to Hong Kong's new leader, Leung Chun-ying, who was appointed by Beijing. The huge turnout presents new problems for China amid its own difficult power transition.

More protests greeted Leung on Monday morning as he kicked off a tour of the island. Visiting a welfare association, he met protesters — both for and against him. Wearing an orange polo shirt, Leung was in casual mode as he held clinics with local people who expressed their concerns, many of which were livelihood issues such as the price of housing and trash disposal.

It is the first day of the new administration. It already mobilized 5 percent of the population. I think you should say that it is a political crisis.

If he was listening Sunday, he couldn't have missed the calls for him to step down. Organizers say 400,000 people took to the streets, though the police figures were much lower.

When asked why the turnout was so big, lawmaker Leung Yiu-chung's answer was simple. "He is a liar. He always tells lies, so people don't like him. They come out to say 'no' to him," the lawmaker said.

The new leader was selected by an elite committee, receiving just over half of their votes. Building regulations had sunk his main rival, Henry Tang, specifically the discovery that Tang had a huge illegal basement. Leung Chun-ying, a surveyor by trade, vowed that he himself was clean. But just last week, he was discovered to have six illegal structures in his house.

The strength of opposition to him has surprised analysts. 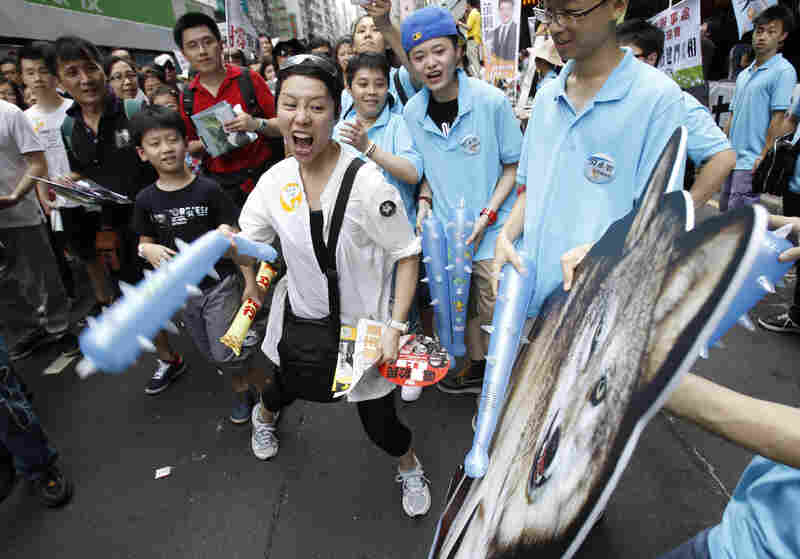 A protester hits a picture of a wolf representing Leung Chun-ying during a pro-democracy protest march in Hong Kong on Sunday, the anniversary of the island's handover to China. There is rising public discontent over widening inequality and a lack of full democracy in the southern Chinese financial center. Wally Santana/AP hide caption 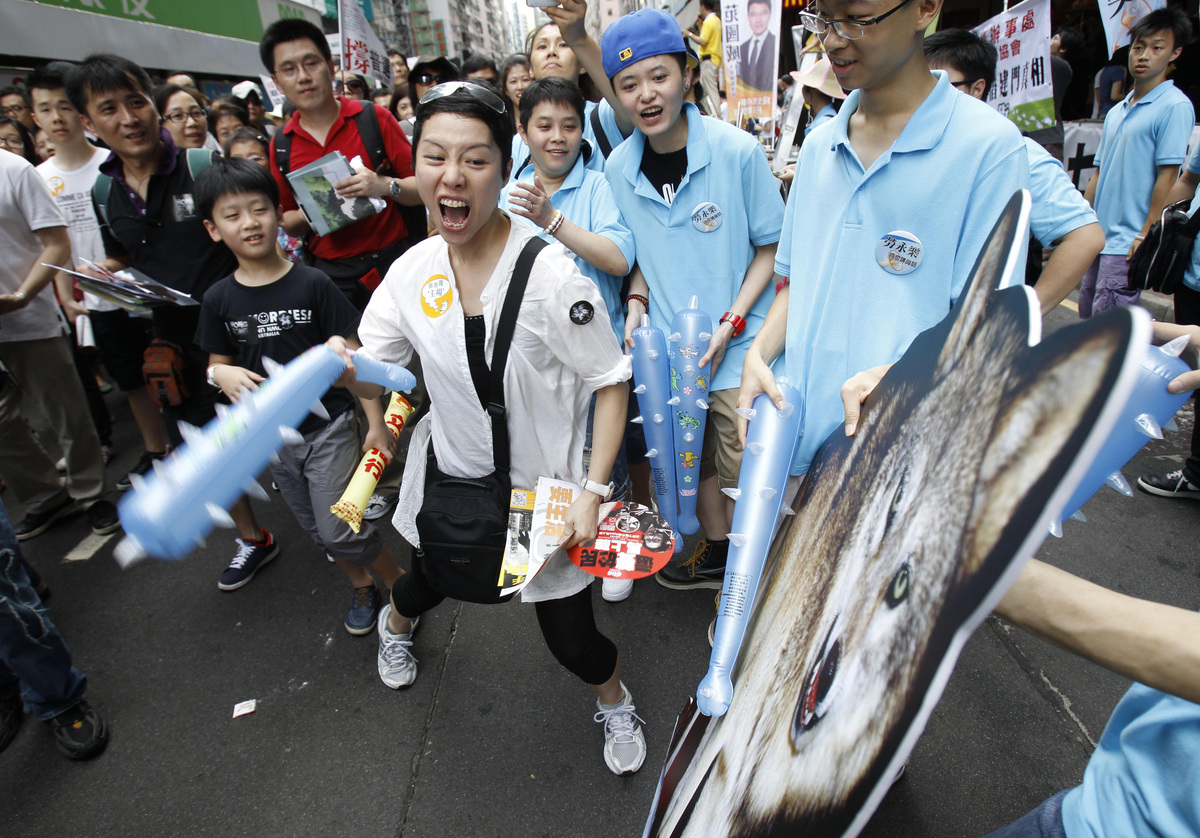 A protester hits a picture of a wolf representing Leung Chun-ying during a pro-democracy protest march in Hong Kong on Sunday, the anniversary of the island's handover to China. There is rising public discontent over widening inequality and a lack of full democracy in the southern Chinese financial center.

"It is the first day of the new administration. It already mobilized 5 percent of the population. I think you should say that it is a political crisis," said Ivan Choy of the Chinese University of Hong Kong. He said Leung's problems are compounded because he's not entirely trusted by pro-government politicians or the business sector.

"When you find that you have a large public rally to oppose Leung Chun-ying, but at the same time you cannot consolidate the business tycoons and the pro-government camp to support you, then you would be in a more serious political crisis," Choy said.

There's been public dissatisfaction over the influence of Hong Kong's powerful tycoons, and Leung had been the candidate pushing change. But on Monday, one newspaper, Apple Daily, called him a "lame duck."

"More than half of the population in Hong Kong have strong doubts on his integrity. He is seen to be a weak chief executive," Cheng said. "He has to depend much more on support from the Chinese authorities, and people wonder if he has the political will and political support to challenge the vested interests, especially the big businesses."

For Beijing, there are also concerns that the massive protests could serve as inspiration to mainlanders. Censors have been busy deleting pictures of the march on Chinese Twitter. But mainland tourists were in awe at the huge turnout and the number of different issues represented, ranging from protecting Hong Kong's freedoms to workers' rights to concerns over the role of local authorities in the death of Chinese dissident Li Wangyang, who officials said hanged himself.

"This is extremely good," said a 26-year-old mainland tourist, who gave his name as Mr. Li. "I'm very moved. I'd very much like to live in this place."

President Hu Jintao was in town for the inauguration; at a late-night gala performance, he sang with the new chief executive. "Sing a song of praise for our dear motherland toward prosperity and a strong nation," they sang.

China's leaders already face a difficult power transition this fall following a domestic political scandal. They may now fear that their choice of a leader in Hong Kong could undermine them further.