Accessibility links
Cheered In Europe, Suu Kyi Faces Crises In Myanmar After her star treatment in Europe, Myanmar opposition leader Aung San Suu Kyi faces a much tougher time at home, where the country faces a range of difficult issues, including violence between Muslims and Buddhists in the western part of the country. 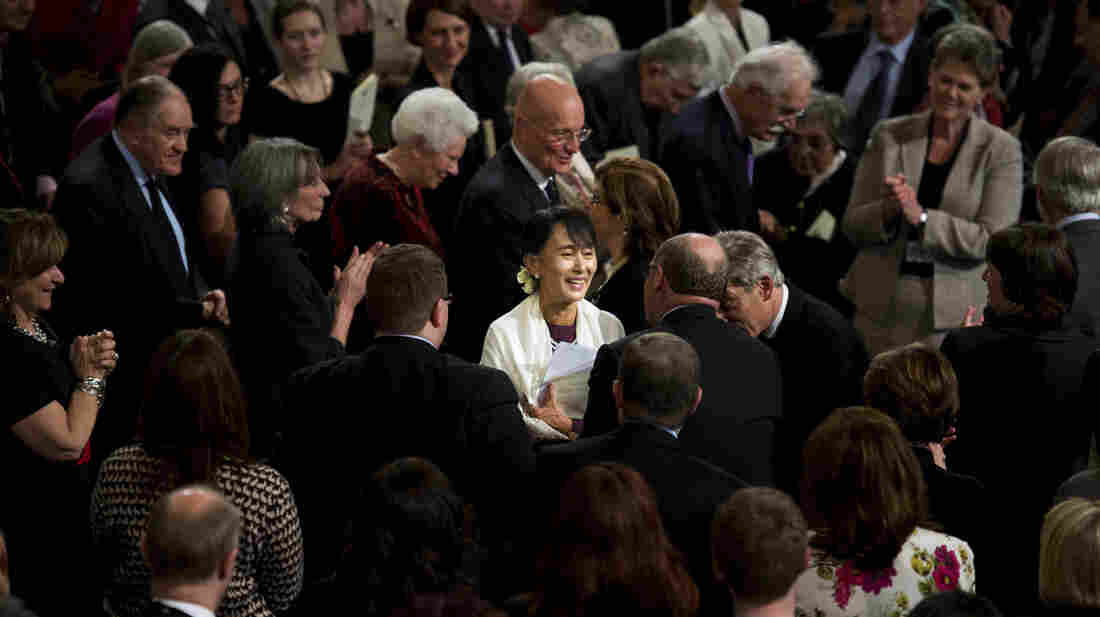 There are few opposition leaders who are welcomed abroad with the same pomp and ceremony as heads of state. But that's the sort of star treatment lavished on Aung San Suu Kyi, opposition leader of Myanmar, also known as Burma, on her three-week tour of Europe.

But pressure is increasing on her to address simmering political crises at home, and to move her country's democratic changes forward.

"This is the most important time for Burma," she told parliamentarians and dignitaries gathered in London's Westminster Hall.

"This is the moment of our greatest need," she continued. "And so I would ask that our friends both here in Britain and beyond participate in and support Burma's efforts toward the establishment of a truly democratic and just society."

Suu Kyi, the first foreign woman and Asian citizen to speak at Westminster in the palace's 900-year history, said that beyond President Thein Sein, it's hard to determine how much support the current efforts in Myanmar enjoy, especially within the country's military. It's an assessment shared by outside observers. 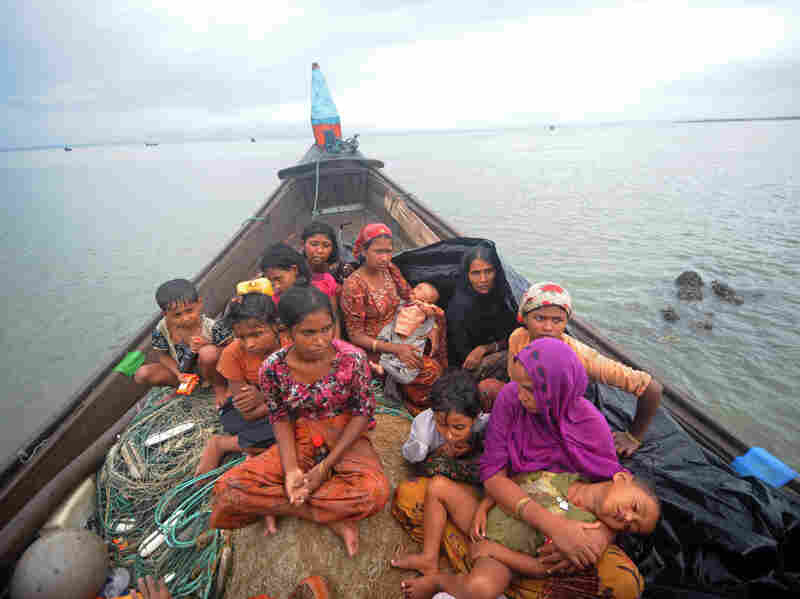 Rohingya Muslims, trying to cross the Naf river into Bangladesh to escape sectarian violence in Myanmar, look on from an intercepted boat in Teknaf, June 13. The plight of the Rohingya minority is one of the tests Suu Kyi faces at home. Munir Uz Zaman/AFP/Getty Images hide caption 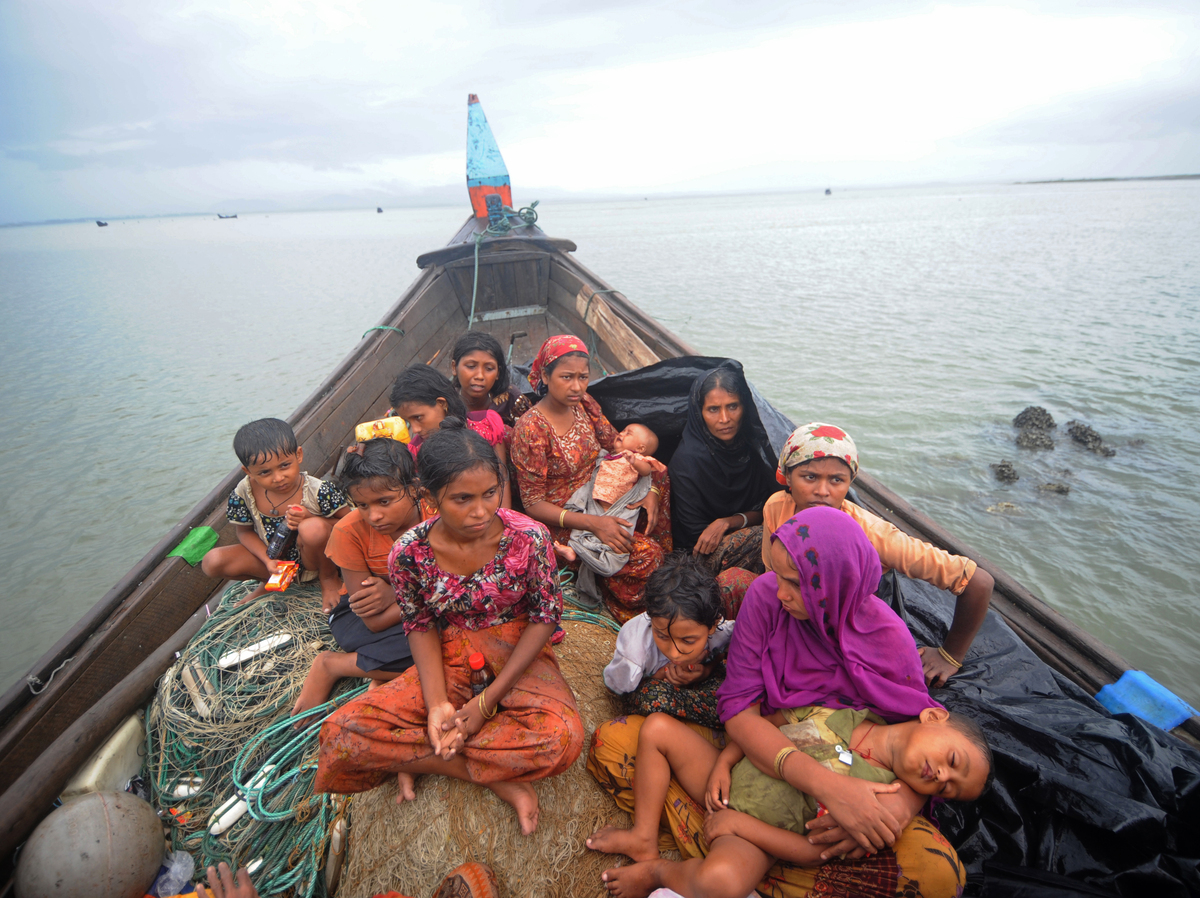 Rohingya Muslims, trying to cross the Naf river into Bangladesh to escape sectarian violence in Myanmar, look on from an intercepted boat in Teknaf, June 13. The plight of the Rohingya minority is one of the tests Suu Kyi faces at home.

"Otherwise there's a great danger that the enemies of reform, those that are currently benefiting from the current system, will exert a pushback," he warns, "and that might be to the detriment of the long-term development of the country."

Pressure is increasing for Suu Kyi to make good on her inspiring rhetoric about human rights. There's no starker example than the Rohingya crisis in Myanmar's western Rakhine state, next to Bangladesh.

Mob violence among Burmese Buddhists and Rohingya Muslims there has claimed at least 80 lives and created as many as 90,000 refugees in the past month.

Many Rohingya immigrated to largely Buddhist Myanmar from what is now Bangladesh generations ago. But neither Bangladesh's nor Myanmar's government recognizes them as citizens.

When asked in Oslo whether Rohingyas are citizens of Myanmar, Suu Kyi said she did not know.

"When you talk about the Rohingya, we are not quite sure whom you are talking about," she said. "There's some who say those people who claim to be Rohingyas are not the ones who are actually native to Burma but have just come over recently from Bangladesh."

Suu Kyi echoes popular complaints in Myanmar that the problem is caused in part by corrupt immigration officials along the border, and ineffective law enforcement in Rakhine state. She says that establishing the rule of law is the key to resolving the issue, but she does not suggest what the law should say.

"She finds herself in a very difficult position, because her constituency is known to be extremely anti-Rohingya," says Maung Zarni, a visiting fellow at the London School of Economics and Political Science. Suu Kyi was elected to represent the remote rural township of Kawhmu, a three-hour drive from the main city of Yangon.

Maung Zarni points out that, when it comes to the subject of the Rohingya, the views of many Burmese pro-democracy activists are just as discriminatory and intolerant as those of the former junta they once fought.

"We must not be ashamed to admit that we have illiberal tendencies and elements within our culture and our practices, and they need to be rectified in accordance with the principles that we espouse or we are fighting for," Maung Zarni says. "You can't have it both ways. Are you for human rights, or are you against human rights?"

Maung Zarni suggests that Suu Kyi emphasize her principles while avoiding the specifics of the citizenship debate. He admits that he, too, opposes recognizing the Rohingya as one of the country's ethnic minorities.

Fresh from her election to Parliament on April 1, and at the end of a triumphant tour of Europe, Suu Kyi now finds herself at an unprecedented level of popularity at home and abroad.

Some supporters point out that Suu Kyi is under considerable pressure not to upset the military into rolling back the changes and revoking her freedoms, and that she is working hard to build an organization that was focused on survival during decades of military suppression. They advise observers to be patient and not judge her too quickly.

But other supporters say Suu Kyi can afford to waste neither time nor opportunities to consolidate and push forward the country's fledgling reforms.