Accessibility links
Movie Review - 'The Amazing Spiderman' - A Lanky Teenager On The Path To (Super) Power Peter Parker's transformation from nerdy teenager to nerdy teenager with superstrength is retold in The Amazing Spider-Man. NPR's Bob Mondello says that star Andrew Garfield is great as the awkward high-schooler with newfound powers, and keeps the movie from feeling superfluous. 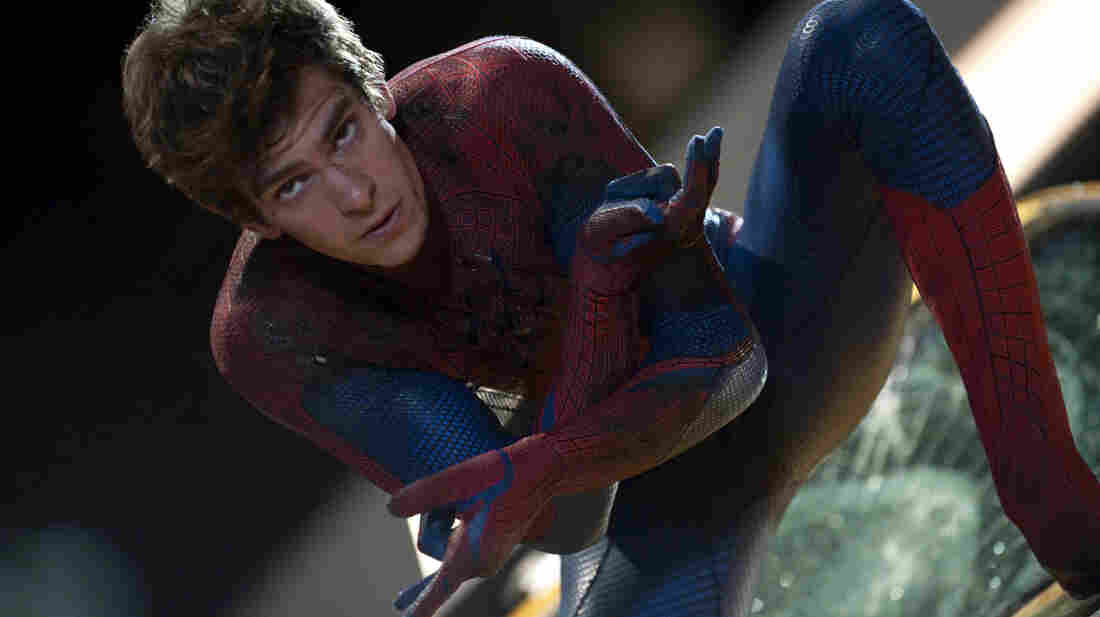 Andrew Garfield stars in The Amazing Spider-Man, in which the nerdy, web-slinging superhero gets an overhauled origin story. Jaimie Trueblood/Sony Pictures hide caption

Rated PG-13 for sequences of action and violence

From 'The Amazing Spider-Man' - 'Second In His Class'

'Second In His Class'

From 'The Amazing Spider-Man' - 'Police Chase'

From 'The Amazing Spider-Man' - 'Take It'

I know you're skeptical. Tobey Maguire's Spider-Man was last slinging webs just five years ago. Broadway's Spider-Man started singing about webs less than two years ago. Now here comes another Spider-dude: This Andrew Garfield guy. So he'd better be really something, right? Well, as it happens, he is.

Garfield's no younger than Maguire was when he first played Peter Parker — the slightly stir-crazy kid who gets bitten by a radioactive spider and starts climbing the walls more literally than most high-schoolers — but Garfield's a lot more appealing, and is also one thing that Maguire kinda wasn't. He's convincing as a teenager.

Skinny and lanky, as if he's just shot up three inches and is still growing into the extra height, Garfield' s Peter Parker is a skateboarder, so suddenly having sticky fingers and toes definitely comes in handy. Superstrength, too, though you get the sense that he'd trade it for a little superconfidence around the girl he has a crush on. (Of course, supershyness has its appeal, too.)

Garfield and Emma Stone are terrific together, and they're surrounded by performers with the acting chops to root a comic-book narrative in the real world — Sally Field and Martin Sheen as Aunt May and Uncle Ben, Rhys Ifans as a one-armed doctor who has good reason to wonder about the ability of geckos to regrow an amputated tail — not just to repair himself, but to create "a world without weakness."

Grand plans, those, to go with a new back story about Peter's scientist dad, plus new gadgetry for web-slinging and new subtext about abandonment issues.

All of which means director Marc Webb — yes, that's his real name — isn't just reweaving the origin tale spun by Sam Raimi 10 years ago. Webb's only previous feature, a quirky little indie romance called 500 Days of Summer, hardly seems to qualify him to make a special-effects blockbuster, but a youthfully quirky vibe turns out to be just right for the story's romance, and it doesn't hurt when Webb is, say, imagining the kinship that crane operators might feel for a guy who swings from tall buildings.

It's only when the rules of the genre require that our hero meet a giant lizard atop a skyscraper that The Amazing Spider-Man gets a little less amazing. There are only so many ways to bring the characters back down without bringing the audience down.

Still, this origin story has had enough nice surprises by that point that even those who like their genre plotlines very taut will be inclined to cut The Amazing Spider-Man a little slack.