Accessibility links
Lesser-Known Lit: Seeking Summer's Hidden Gems Passing along a book that no one has heard of is like telling a really good secret. NPR's Barrie Hardymon recommends a hot Southern thriller, a scathing evisceration of the newspaper biz, a slightly ridiculous, totally gratifying romance, and one extra gem that's been hiding in plain sight. 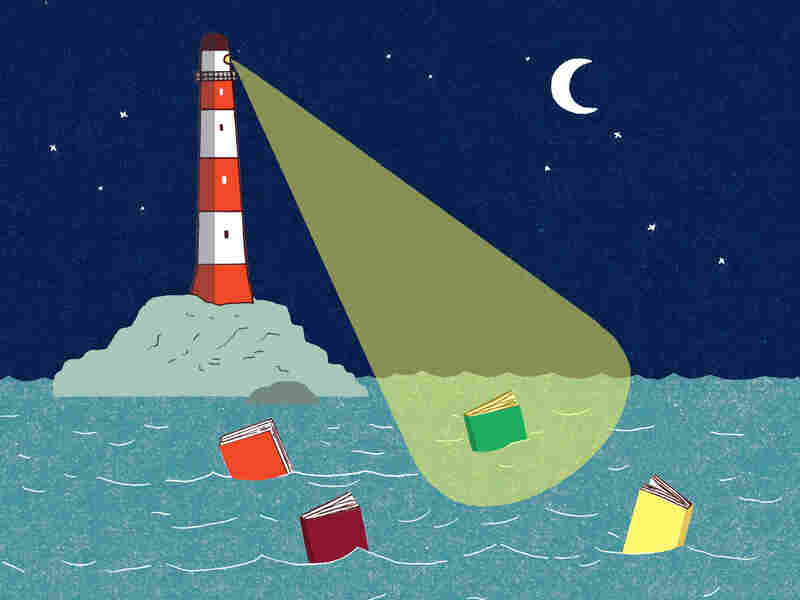 I know, I know. You've already started tearing through Bring Up the Bodies, pre-ordered Canada and — since you pretend to have read the first few massive volumes of his LBJ bio — uploaded Robert Caro's latest history lesson to your Kindle. Spoiler: The pres dies in the end.

There, now you can have some fun with gems that haven't headlined The New York Review of Books. While it's certainly gratifying to lock eyes with a fellow reader enjoying one of the season's biggies, I love to pass along books that no one has heard of — it's like telling a secret. Good for the book, better for your reader's ego.

Of course, it's hard to say what gets a book to the top of everyone's reading list and what keeps another hidden on a back table in your bookstore (though I've been known to annoy the folks at Barnes & Noble by rearranging things). Halfway through making this list of hidden gems, I realized that Jess Walter's fantastic Beautiful Ruins is a gem that no longer qualifies as hidden. Nothing would gratify me more than for this entire list to be outdated by August — so get reading.

Among the treasures here are an Edwardian mystery-drama, an acidly funny evisceration of the newspaper biz, a hot Southern thriller and a slightly ridiculous though entirely gratifying romance to get you through your long, hot commute. Oh, and one extra gem hiding in plain sight.

As the fallout from the phone hacking scandal at Rupert Murdoch's News of the World drags on, Annalena McAfee's nasty and funny The Spoiler is an instructive look at London newspapers in the late '90s. Honor Tait is a fierce and crabby older war correspondent who has reported from the greatest hits of the 20th century: Buchenwald, Madrid, Korea. She has even interviewed Franco. Tamara Sim is the callow young features writer specializing in Hollywood tripe ("Ten Best Soap Opera Shags" and so forth) who is sent (mistakenly) to interview Tait for the middling respectable Monitor. To reveal more about the narrative would spoil The Spoiler, but suffice it to say the two journos have more in common than they thought. Although the book works as time capsule — capturing the dawning of the downturn, when newspapers first came under siege of the Internet — it's also a satisfying tale of two women, told at a slow burn.

Julian Laurence is a handsome Brit made even more so by his hedge fund billions. Kate Wilson is a young Wall Street analyst. They fall in love, natch, but they also share a past of which only one of them is aware — depending on the time period. Beatriz Williams' hybrid novel — equal parts romance and time-travel adventure — jumps back and forth between pre-crash, 21st-century Wall Street and the first world war, where Julian's strange back story is revealed. Overseas works as a sort of upbeat antidote to The Time Traveler's Wife — and it's no less engaging for its optimism. Be warned: It's more successful as a mystery than as a romance — some of the kissy-face Julian and Kate engage in is likely to make your eyes roll, but you'll be grinning madly while you do. Pass the champagne!

A Land More Kind Than Home

Wiley Cash's debut novel opens in a hot haze of death and religion — led by the creepy, charismatic and appropriately sibilant preacher Carson Chambliss (the extra "s" is for SIN). Chambliss is a minister in a small Appalachian town, at the River Road Church of Christ in Signs Following. And he's a bad, bad man. Jess Hall is a 9-year-old boy whose mute brother, Stump, has met a mysterious end — after he sees something he shouldn't have. Jess, who's already pretty grown up, has to grow up even faster as the secrets and lies in the town start to spread, reaching a fever pitch in a breathless climax. The book is a thriller, but it's so beautifully written that you'll be torn about how fast to read it. This is great, Gothic Southern fiction filled with whiskey, guns and snake-handling. Read it outside, with a cold drink (with cubes, of course) and a fan blowing.

At first glance, it may seem that a comfortably familiar collection of tropes populate Sadie Jones' new novel, The Uninvited Guests. There is an Edwardian manor, a family in money trouble, a marriageable oldest daughter, along with a rebellious, younger tomboy. There is a dark and stormy night — a real one, in which a terrible accident will occur and, you guessed it, secrets will be revealed. All these elements are catnip for anyone who has ever spent time with Downton Abbey. But I promise you that what's most pleasurable in The Uninvited Guests isn't its well-trod plot elements — it's the book's very strange turn. Imagine an episode of The Twilight Zone set at Downton, complete with mystery, horror and a bracing bit of class commentary. Jones' writing gives potent life to the characters' choices — she's a wonder at getting inside heads — and though the ending is tidy, the path to it is shocking and delicious.

A Farewell to Arms

Obviously, A Farewell to Arms is a gem — there's hardly anyone who hasn't been socked in the gut by its bracing prose and bleak story. But hidden? Any Hemingway fan worth his sweat knows Papa was a compulsive re-writer, and if you've ever wanted to see those hidden drafts — those gems if you will — here they are. Famously, Hemingway said he rewrote the last page of A Farewell to Arms 39 times before he was "satisfied." Apocryphal? As it turns out, yes. There are actually 47 endings, all collected in this edition. To see Hemingway go from bold pronouncements and overwriting to his signature stripped-down style isn't just instructive, it's practically intrusive (but fun!). Spend your summer reacquainting yourself with Henry and Catherine (I won't spoil it, but buy tissues), and get a bonus writing tutorial from Hemingway himself.