Accessibility links
Summer Cooking Tips From 'America's Test Kitchen' Jack Bishop and Bridget Lancaster highlight some of their favorite grilling techniques and summer recipes — everything from meats to vegetables to, yes, even desserts. 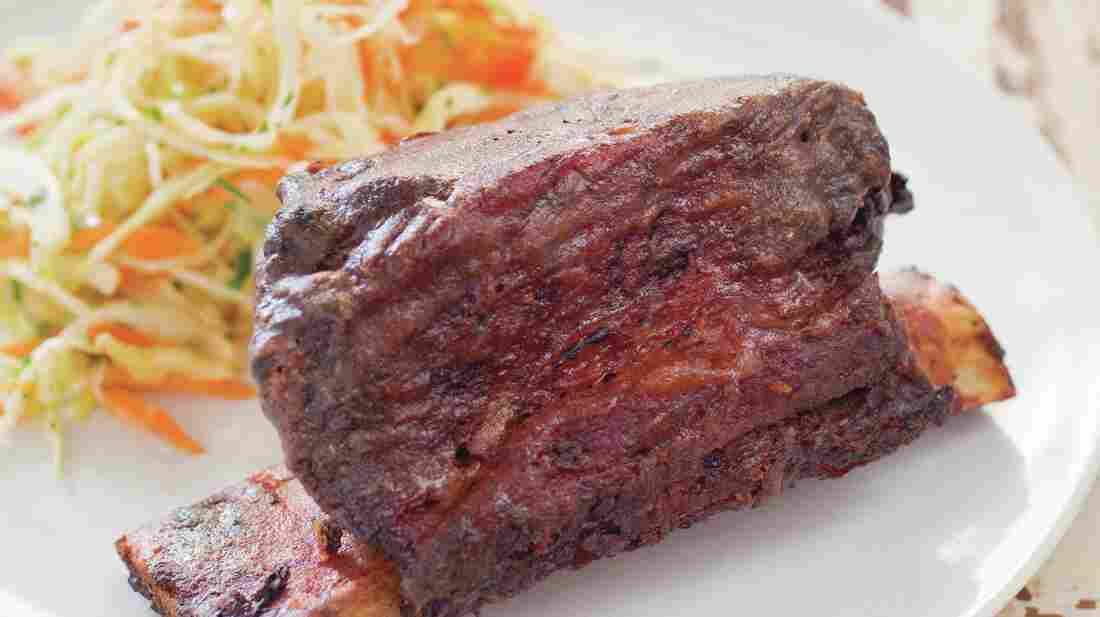 Tired of regular old hamburgers and hot dogs for July 4?

You're in luck. On Tuesday's Fresh Air, Jack Bishop and Bridget Lancaster from America's Test Kitchen join Terry Gross to highlight some of their favorite grilling techniques and summer recipes — everything from meats to vegetables to, yes, even desserts.

Bishop and Lancaster have been grilling for years. They love the technique because it concentrates flavors and makes food taste really, really good.

"You're basically creating this charred surface," says Lancaster. "And the smoky char on the food just about makes anything better — maybe not pie, but just about everything else." 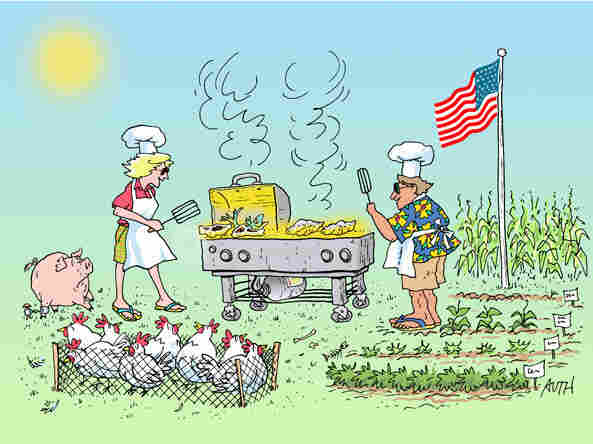 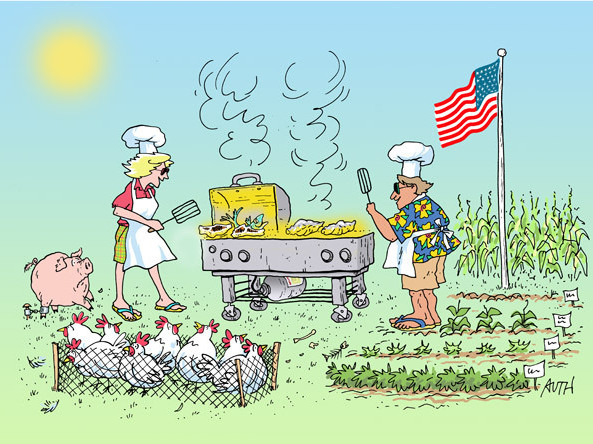 Lancaster calls herself an "equal-opportunity griller" — meaning she'll cook on either charcoal or gas, depending on what's for dinner.

"I use a gas grill more often, and that's because it's super convenient," she says. "Charcoal is a little more of a project. You have to light the coals and build the fire. But charcoal grills, in my opinion, are one of the best ways to barbecue or smoke foods."

"I have both a gas grill and a charcoal grill," he admits. "And when I want smoke flavor, I'll go through the extra work of using a charcoal grill and adding wood chunks. But I grill everything. I grill bread in the summer, and I'm not going to build a fire to grill four slices of bruschetta."

Below, some of Lancaster and Bishop's tried and trusty techniques for some of their favorite summer recipes:

On chilled tomato soup: It's a beautiful thing to have a cold vegetable soup on a warm summer day. Lancaster suggests starting with regular garden-variety tomatoes. Roast them briefly in the oven with some tomato paste, paprika, shallots and garlic, to concentrate their flavors. And then toss them into a food processor with some olive oil. "You end up with this luxurious, silky, rich tomato soup, and it's beautiful — lovely with a nice bread," she says.

On corn on the cob: Have trouble getting corn out of the husk? Use a microwave to help, says Bishop. "You lop off the first row of kernels from the stalk end — the part that was attached to the plant — and then throw the whole thing into the microwave, and 30 seconds later, you can slide both the husk and the silk [off]."

He also recommends boiling corn for no longer than a minute or two, if you're going to go the non-grilling route. "The corn we eat now bears almost no resemblance to the corn we ate a long time ago," he says. "Using an old recipe, it might say to cook it for 8 to 10 minutes, but that is way too long."

And remember to save the cobs for making stock. "You can use it to make rice dishes, summer soup — and it's great for bean dishes, too," says Bishop.

On short ribs: Short ribs aren't typically cooked on a grill because they're a tougher cut of meat full of connective tissue, which takes a really long time to break down. But Lancaster says there's an alternate approach: Cover your short ribs in foil and pop them in an oven at a low temperature for a couple of hours. That helps the tough connective tissue break down into gelatin, which gives meat a silky texture.

"We start them in the oven, and we coat them with this spice rub and steam them with a little bit of vinegar," she says. "By the time they get to the grill, we baste them with a tart mustard and brown sugar sauce, and they are amazing. They melt in your mouth."

On hamburger patties: Lancaster says she's a purist — she loves 85 percent lean ground beef — but notes grinding your own cuts can lead to more flavorful hamburgers. "You can choose short rib meat, brisket and steak tips, and create a beef patty that way," she says.

On turkey burgers: Forget the dry hockey pucks you might have consumed in the past, says Lancaster. Use turkey thigh meat and add lots of savory flavorings, like mushrooms and soy sauce, to keep the meat moist. "We also add gelatin bloomed in a little bit of chicken stock, which gives [turkey burgers] the silky texture of a beef burger," says Lancaster. "And we also coat them with a bit of baking soda. The baking soda is an alkali, so it raises the pH level and tenderizes the meat, so you end up with a turkey burger that is succulent, meaty and juicy."

On grilling veggies: Vegetables need to be cut into large shapes so they don't fall through a grill onto the coals. Bishop's favorites include red onions, zucchini and sweet potatoes, which he cuts into half-inch thick circles before placing them on the grill. "They need a really, really cool fire, so you can't put them directly over the coals," he says. "They'll take about 20 minutes or so. And what happens on the grill is that it brings out the natural sugars, and it caramelizes and just has so much more flavor than any other way you can cook those vegetables."

On fish: The biggest complaint received by the Test Kitchen about grilling fish? It sticks to the grates. But there's an easy fix: Take a wad of paper towels dipped in vegetable oil, and use tongs to rub them all over your grill grates several times. "This forms a temporary nonstick surface on the grill grate," says Bishop. "And then you put the fish down diagonal to the grill grates, which keeps it from falling through, and makes it a little easier to get a spatula underneath when it's time to flip the fish."

On easy summer desserts: Think fruit gratin. It's easy, delicious and seasonal, says Lancaster, who recommends rounding up summer berries. Throw them into the bottom of a pie dish and then make a simple topping of cubed bread tossed with butter, cinnamon and sugar. "Put that right over the berries, and put that in the oven for 15 to 20 minutes at 350 degrees," she says. "It's absolutely amazing. You scoop that out with some ice cream. It's probably my favorite summer dessert."