Accessibility links
The Highwaymen: Segregation And Speed-Painting In The Sunshine State Today, their paintings hang in the White House. But in the 1960s, they sold them, often still wet, from the trunks of their cars. 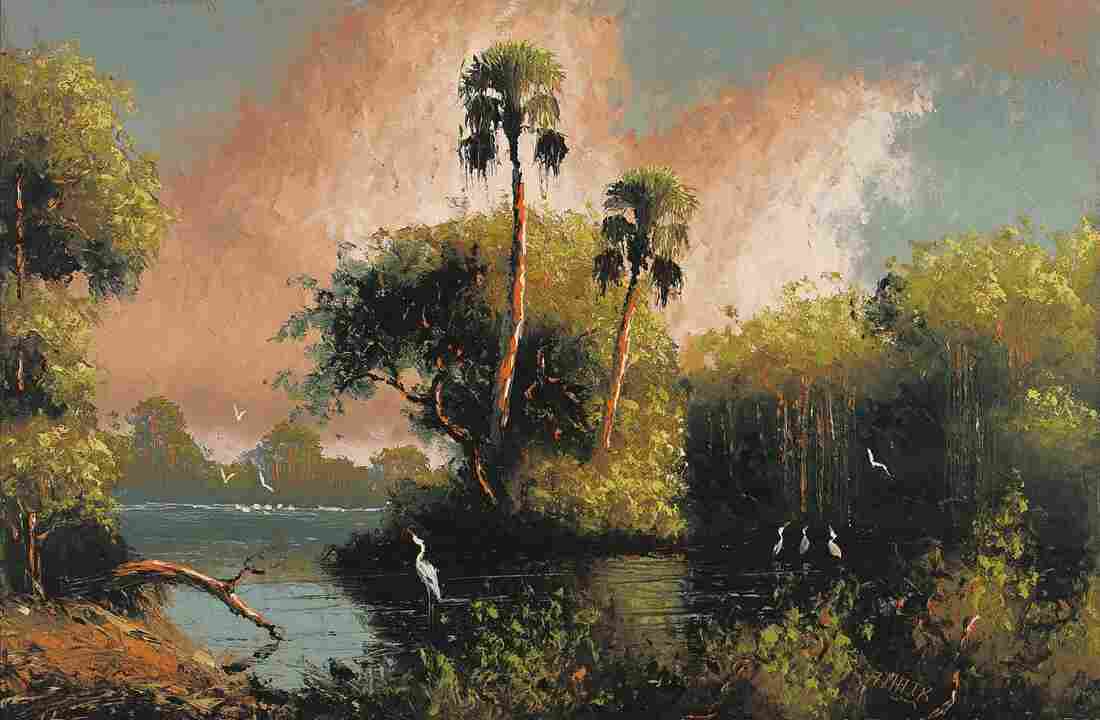 In the 1960s and '70s, if you were in a doctor's office, or a funeral home, or a motel in Florida, chances are a landscape painting hung on the wall. Palms arching over the water, or moonlight on an inlet. Tens of thousands of paintings like this were created by a group of self-taught African-American artists, concentrated in Fort Pierce, Fla. 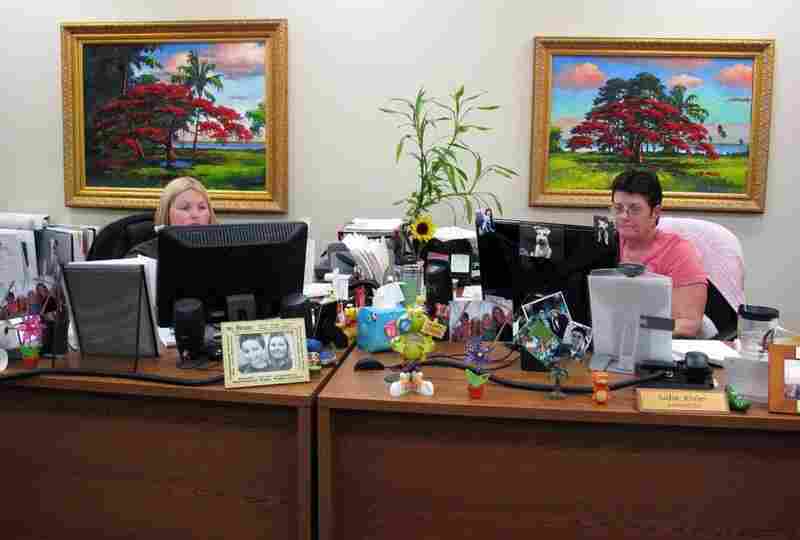 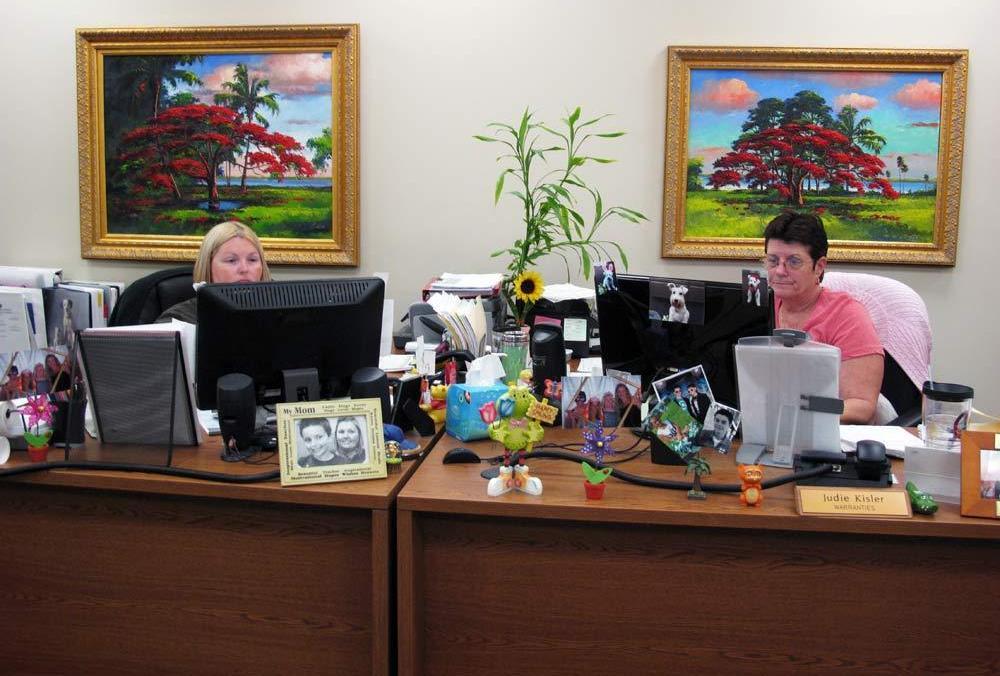 Highwaymen paintings hang in the background at Jetson's Appliance store in Florida.

The Highwaymen, as they're called, didn't earn that nickname until the 1990s, but it refers to their early days: Following the years of Jim Crow segregation, they churned out lush oil landscapes four and five at a time, and sold them from their cars along Route 1 — often before the paint had even dried. After all, they weren't allowed in galleries.

Those paintings, which once sold for $25, now go for thousands, and owners include Michelle Obama, Shaquille O'Neal and Jeb Bush. But as the reputation of The Highwaymen has grown, so has something else: tension on their native turf.

Gary Monroe, professor and author of The Highwaymen, Florida's African-American Landscape Artists, counts 26 original Highwaymen. That's how many were inducted into the Florida Artists Hall of Fame in 2004 — 18 of whom are still living.

Mary Ann Carroll, 71, is one of them — a tall, formidable woman who keeps a Bible handy. She's a pastor, and to this day, the only female painter of the group.

As a young woman, Carroll picked citrus and cotton, and had seven children to raise on her own. Like many of The Highwaymen, she got her start because she needed the money.

Although she paints quickly, she says she puts her heart into every canvas: "It might just be a drop of water, you know? But in my mind, I'm working on a masterpiece." 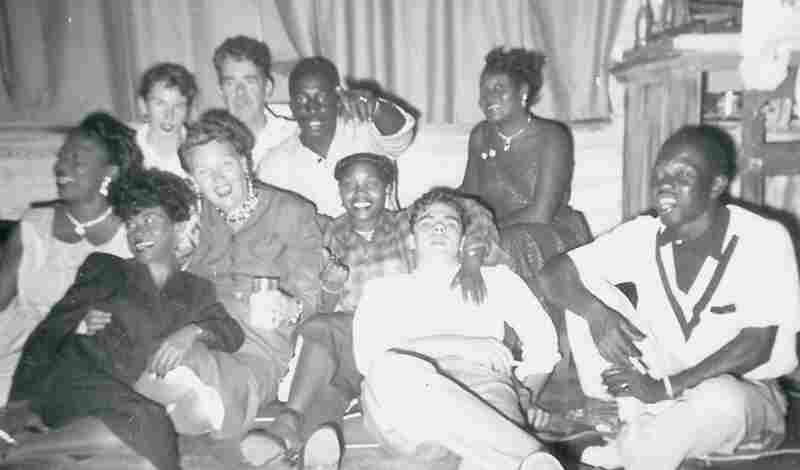 A.E. Backus with friends in his Fort Pierce studio Courtesy of the A.E. Backus Museum and Gallery hide caption 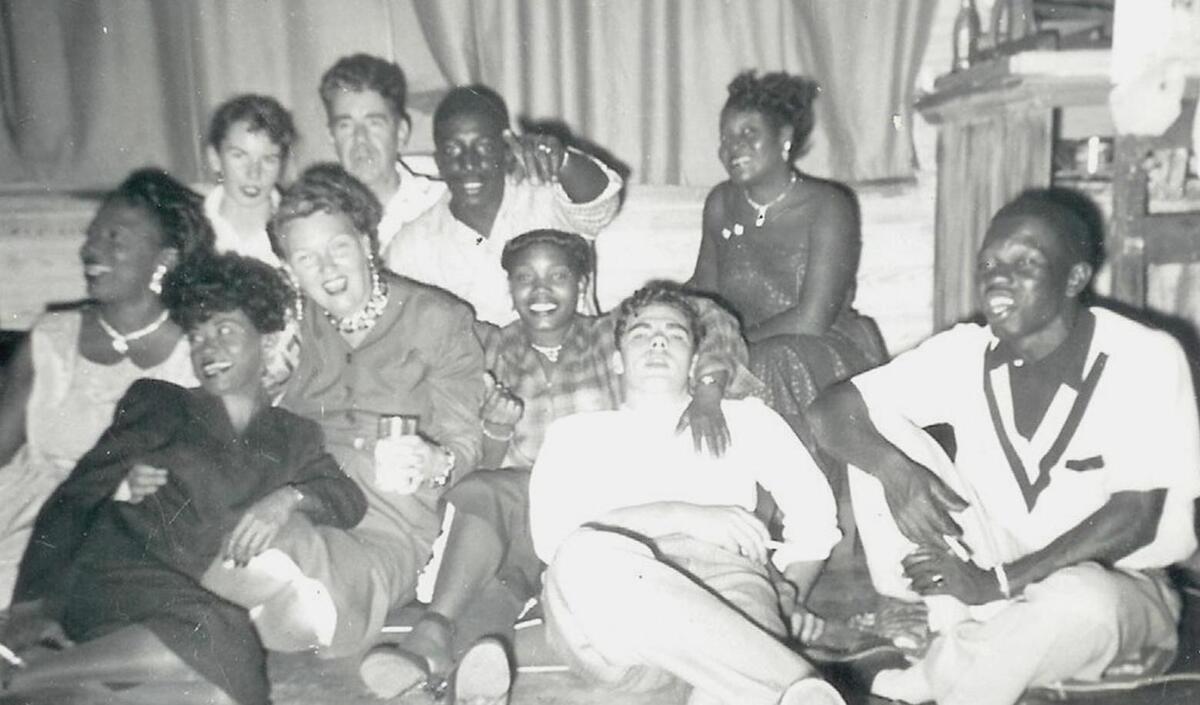 A.E. Backus with friends in his Fort Pierce studio

Courtesy of the A.E. Backus Museum and Gallery

"Some of them are really horrible, ugly paintings," says Kathleen Fredericks, executive director of the A.E. Backus Gallery and Museum in Fort Pierce. Her attitude stems from a belief that The Highwaymen owe an unacknowledged debt to the work of regional painter A.E. "Beanie" Backus. 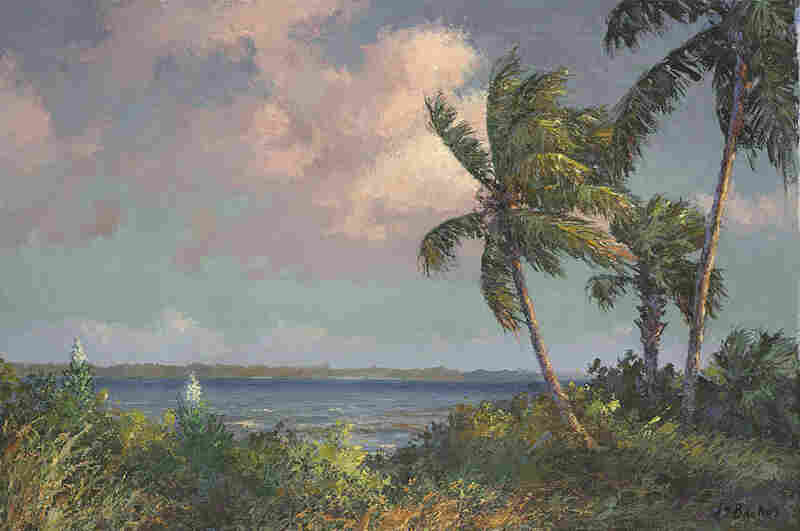 Spanish Bayonets on the Indian River. This painting by A.E. Backus suggests an influence on The Highwaymen Courtesy of the A.E. Backus Museum and Gallery hide caption

Born in Fort Pierce in 1906, Backus painted romantically, masterfully, inspired by Florida's wild coastal beauty. He was the first native Floridian to paint Florida year-round, capturing the subtle way the seasons changed, the gusts of wind that came off the ocean and curved the palm trees like sabers arching over the water.

He was exceptional in other ways, too. Jim Crow was in force in Fort Pierce, which was, in his youth, literally segregated by train tracks and was the site of Ku Klux Klan marches. And yet Backus kept his studio doors open to anyone of color, and everyone came.

He gave jobs to students like Alfred Hair, a young, black aspiring artist whose art teacher took him to the Backus studio on a field trip in the 1960s. Hair started building canvases for Backus, and was soon painting on his own. A smart man in a hurry to make money, he took the landscape techniques and reworked them, painting faster and faster; by today's standards, they went viral.

Fast, cheap and appealing: That would become the business strategy behind the whole Highwaymen enterprise — and it did become an enterprise. Hair wasn't the only painter of his kind. Harold Newton had figured it out. So had James Gibson. 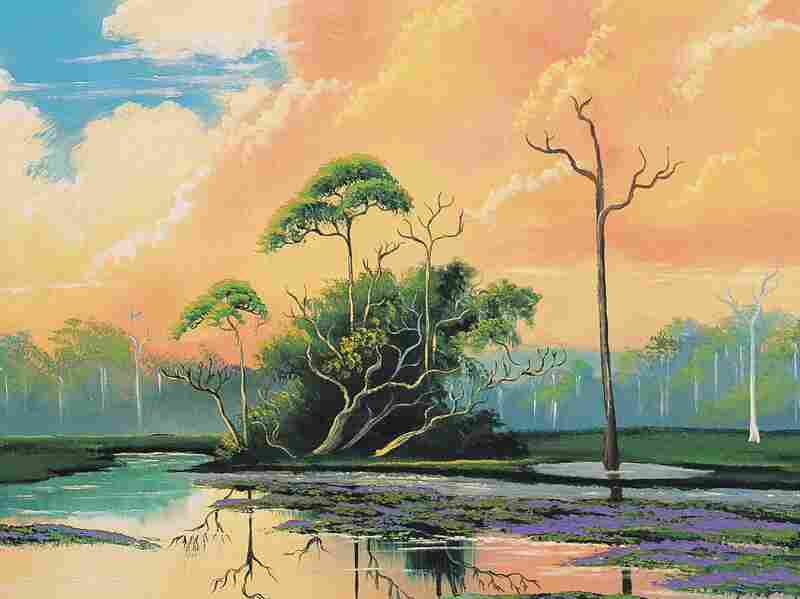 A painting by Mary Ann Carroll, one of 26 painters known as The Highwaymen, who were inducted into the Florida Artists Hall of Fame in 2004. Courtesy of Mary Ann Carroll/Gary Monroe/University Press of Florida hide caption

A painting by Mary Ann Carroll, one of 26 painters known as The Highwaymen, who were inducted into the Florida Artists Hall of Fame in 2004.

Fredericks would also hang out at Backus' studio. And today, she defends his reputation fiercely, believing The Highwaymen have made cheap reproductions of the paintings that hang in her gallery. "There's a reason why they were viewed as motel art," Fredericks says.

Her words hint at a broader divide in Fort Pierce. Not just an art spat, but perhaps vestigial racial tension from Jim Crow to the present. Fort Pierce recognizes The Highwaymen, but doesn't seem to know how to include them. One particular sore point is a monument that was built in their honor: The commission went to a white artist from Miami. 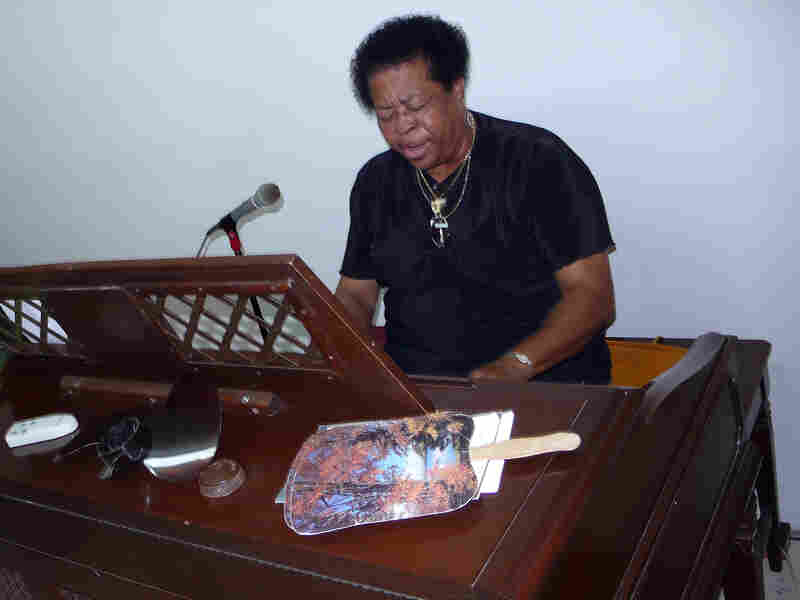 Mary Ann Carroll is, to this day, the only female member of The Highwaymen. She is also a pastor, when she isn't painting, at her own church in Fort Pierce, Fla. Courtesy of Gary Monroe hide caption

"We had a struggle, and we still have a struggle here in St. Lucie County, kid you not," says Mary Ann Carroll.

A festival the Backus museum gave The Highwaymen in recent years devolved into acrimony and accusations. Yet nearly everyone says The Highwaymen and Backus are intertwined. So where is the spirit of tolerance and inclusiveness that everyone remembers from Beanie Backus' home studio?

The Highwaymen don't all tell their story the same way, see it the same way, or paint their own history in the same hues. But Mary Ann Carroll says no matter what, she knows her life is better for having been an artist.

"My life," she says, "no matter how bad it might have been, I took joy out of it. I took the bad and reframed it. You know like you take a bad painting and put it in a beautiful frame? It makes a difference."