Accessibility links
Baseball's Teen Phenom Steals Home, And Hearts Bryce Harper was 16 when he made the cover of Sports Illustrated as "Baseball's Chosen One." He was 17 when he was the top pick in the amateur draft. And he was 19 when he made his major league debut with the Washington Nationals. Now, after two months of play, he's measuring up to all the hype. 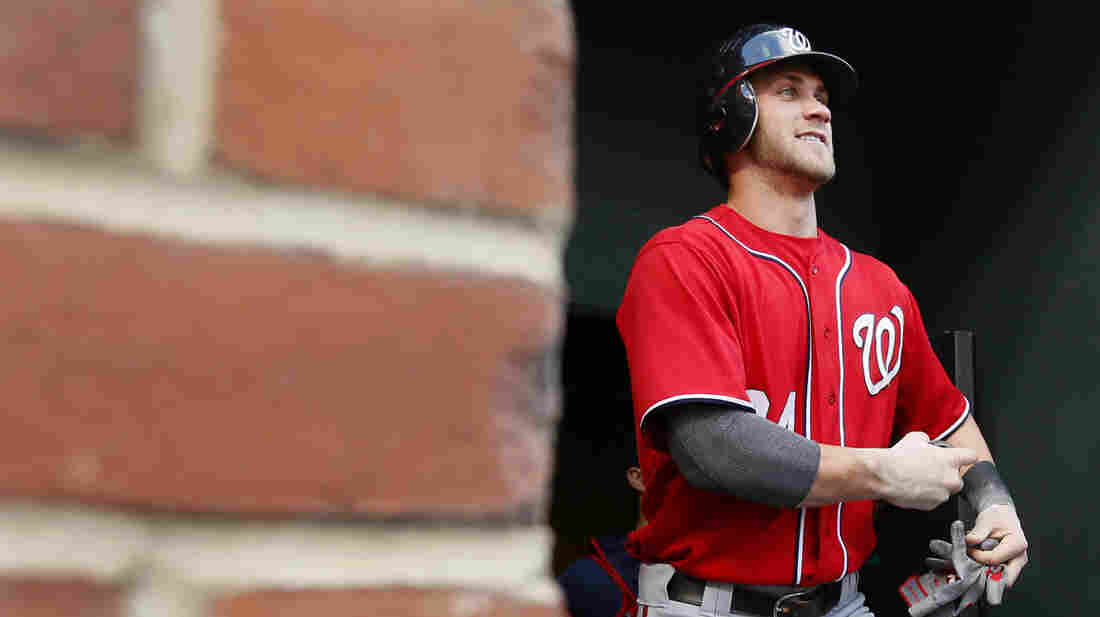 Washington Nationals' Bryce Harper walks out of the clubhouse before an interleague baseball game in Baltimore. Patrick Semansky/AP hide caption 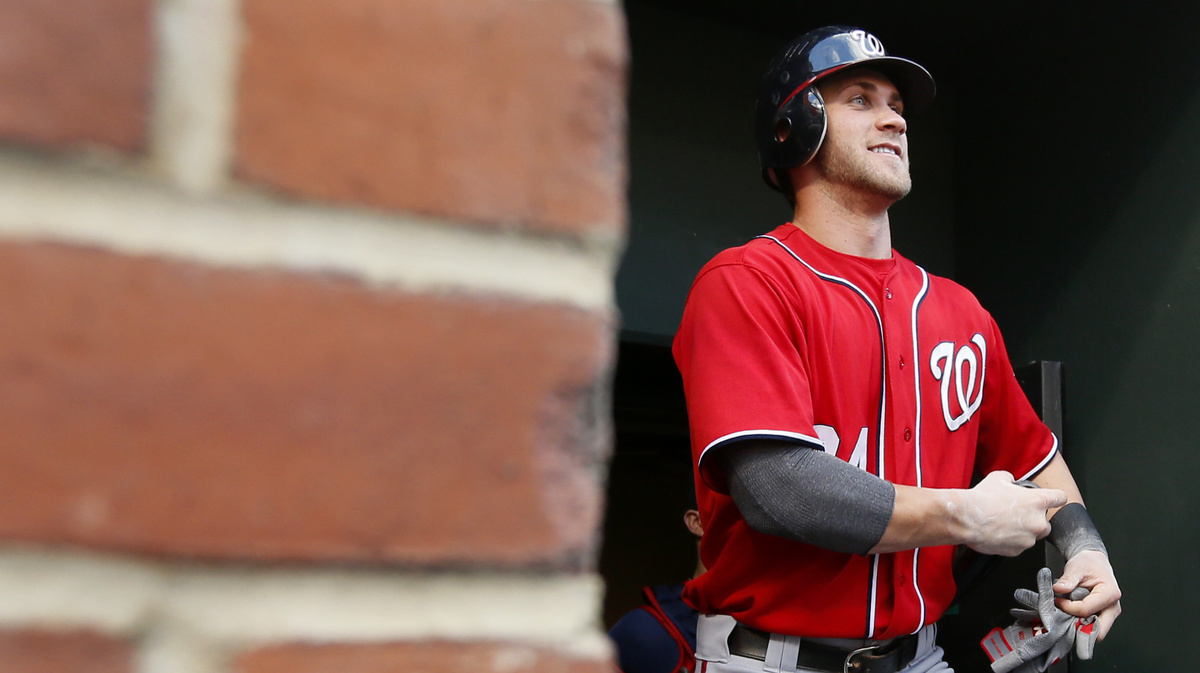 Washington Nationals' Bryce Harper walks out of the clubhouse before an interleague baseball game in Baltimore.

Bryce Harper was 16 when he appeared on the cover of Sports Illustrated, pictured swinging a bat in the desert and declared "Baseball's Chosen One."

He was 17 when he was chosen as the top pick in the amateur draft. And he was 19 when he made his major league debut with the Washington Nationals.

Now after two months of play, he's measuring up to all the hype.

In The Big Leagues At 19

"I come in here and try to laugh and smile as much as I can," he says. "I have a great team around me. And it's just a lot of fun coming in here every day in the clubhouse, and I just have a blast."

Harper started building his reputation with laser throws from the outfield, by running the base paths so hard that his helmet flies off, and by blasting home runs. 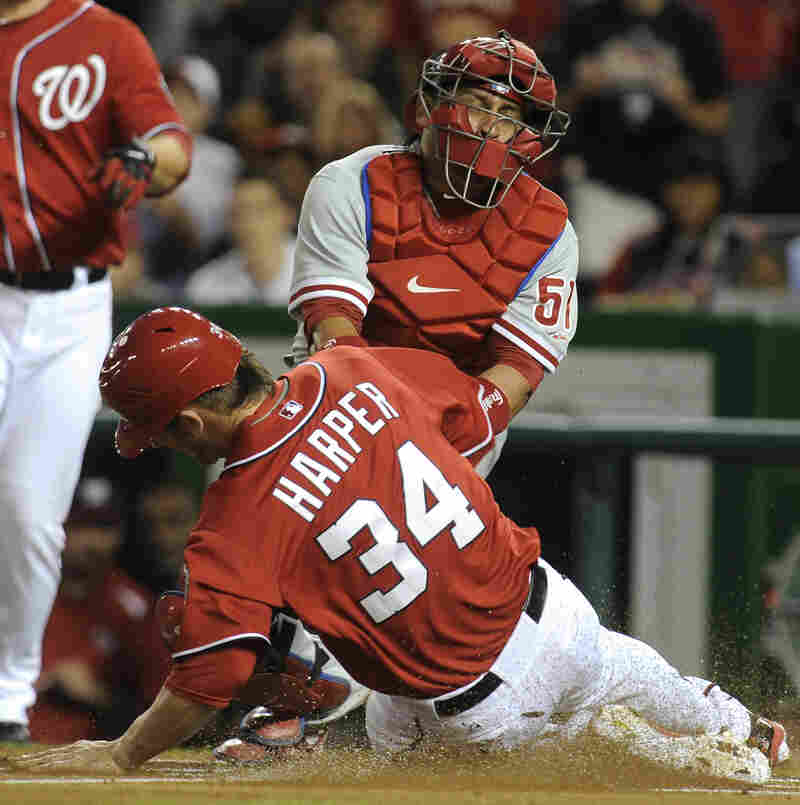 Bryce Harper's legend grew when he stole home after being hit — deliberately — by a pitch from the Philadelphia Phillies' Cole Hamels on May 6. Rich Lipski/AP hide caption 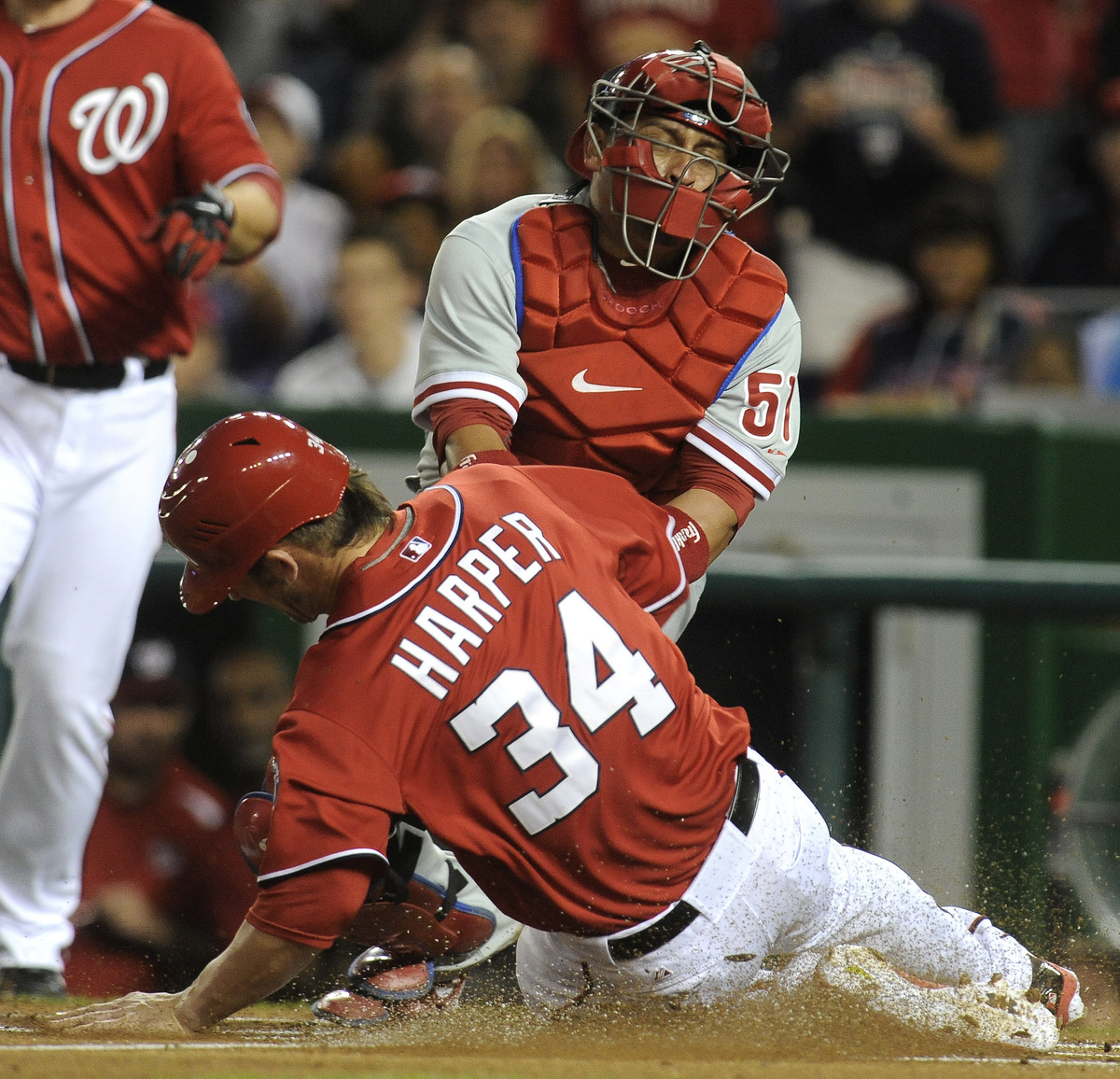 Bryce Harper's legend grew when he stole home after being hit — deliberately — by a pitch from the Philadelphia Phillies' Cole Hamels on May 6.

But he's not one of those modern sluggers who stand at home plate admiring their blast. He takes off running.

Harper built his legend, too, when Philadelphia Phillies pitcher Cole Hamels threw, and later admitted to, a deliberate welcome-to-the-majors-kid fastball to Harper's back. Harper didn't show emotion. But when he advanced to third base, he waited until Hamels turned to pick off the runner at first. Then, Harper pulled off a rare steal of home.

Sometimes that teen energy leads to rookie mistakes — like getting thrown out at third base when he should have stopped at second, or the time when he slammed his bat against a wall in frustration after grounding out. The bat bounced back and smacked him in the head, opening a gash over his eye. Harper ran out to right field the next inning with blood streaming down his face. Later, he'd get 10 stitches. That only added to the legend.

Harper, unlike many young players, knows his baseball history and models his play on of some all-time greats like Cal Ripken Jr., Pete Rose, George Brett and Ken Griffey Jr. — "old-school guys that played the game the right way," he says.

Those players never had to grow up in an Internet age, when everything Harper does is magnified and makes instant news.

In Toronto, a reporter kept pushing him, asking whether he would celebrate a home run with a beer. Nineteen-year-olds can legally drink beer in Canada.

"That's a clown question, bro," Harper replied, before turning to the next question.

The video clip of his use of "clown" as an adjective went viral, and the phrase became famous.

That "clown" question was also a disrespectful one to ask someone raised as a Mormon. Members of the Church of Jesus Christ of Latter-day Saints are taught to abstain from alcohol. Harper grew up in Las Vegas, where his father, a retired steelworker, helped build the city's hotels and casinos. His mother is a paralegal.

Harper left high school after his sophomore year, got his GED and enrolled in a community college near home, where he could play for a year against better competition. The local league used wood bats, like the ones he would have to prove himself with as a professional.

He'd already been hitting home runs so far that, at 16, he made the cover of Sports Illustrated. That helped start the legend. But it also created resentment.

In basketball, teen stars are expected. In the recent NBA draft, the first three picks were 19 or younger, and five of the top 10. But baseball takes longer to master, and its heroes are expected to be older.

At opponents' ball parks, Harper gets cheers and lots of boos. The Nationals' manager, Davey Johnson, says Harper handles the jeering like a pro, too.

Now, Harper is competing for the last spot to play in next week's All-Star game. Johnson says he'd like to see Harper take the days off to rest his sore back. But Harper just wants to play baseball — every day. Still, if he's not an All-Star this year, Bryce Harper figures he'll get more chances in the future.