Accessibility links
A Pie For All Regions: Serving Up The American Slice We hold this truth to be self-evident: America loves pie. But each region also reserves the right to bake the treat in its own style. In United States of Pie, writer Adrienne Kane explores local takes on the ultimate American confection. 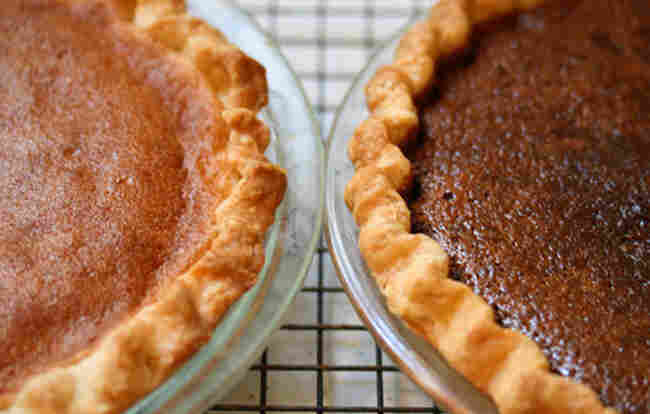 We hold this truth to be self-evident: America loves pie. We, the people, a nation of bakers and eaters, value the art of creating that crispy, gooey, fluffy, fruity dessert — and each region reserves the right to bake the treat in its own individual style.

Food writer Adrienne Kane celebrates that right. She has gathered those regional pie recipes into a new cookbook, United States of Pie. To demonstrate the regional range in American pies, Kane brought two samples to her interview at NPR's studio: a Chocolate Raisin Pie, from the West Coast, and a Bakewell Pie, from the Northeast.

Kane tells NPR's Linda Wertheimer that the buttery, tart Bakewell Pie actually has its roots in Europe, which is fitting given the Northeast's colonial history.

"[The] Bakewell Pie is adapted from the very common English dessert, Bakewell Tart," she says. "I found the Bakewell Pie recipe in an 1886 cookbook called The Unrivalled Cook-book and [Housekeeper's] Guide. It's a raspberry jam on the bottom, and then an almond meal sponge on top. It's not too sweet, so it's kind of perfect for breakfast, if you like that sort of thing — and I happen to like that sort of thing."

Chocolate Raisin Pie, on the other hand, is a purely regional creation. 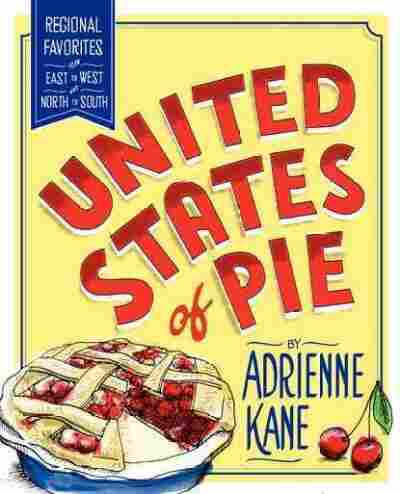 Regional Favorites from East to West and North to South

"It's sort of like a brownie in a pie, and it has that wonderful combination of chocolate and raisins — think Raisinets," Kane says. "And it's obviously from the West Coast, actually from Southern California. It comes from the fact that California is grape country and raisin country, and it's sort of an adaptation of using what's around you."

On which region has the best take on pie

"I grew up in California, so I'm obviously partial to the West. But [in] the West, most of the pies are fruit-based. But I think that the Midwest truly has that ingenuity. It has a lot of pantry staples, a glut of dairy products, and so a lot of sort of cream- and meringue-based pies. I was reading through recipes and thought over and over again, I can't believe they made something sweet and delicious out of virtually nothing."

On the Northeast's Sack Pie, or baking a pie in a paper bag

"That is an intriguing recipe. You bake the entire pie in a large paper bag, and so it steams the fruit and the fruit becomes very tender. And then at the last moment, you take it out of the bag and finish it off in the oven and just sort of brown the crust and the top ... It sort of smells papery in your kitchen for the first half-hour or so, but I will tell you that it doesn't taste papery at all."

On her favorite pie

"There are so many favorites! Today I would say that my favorite is the Concord Grape Pie, and that's from the Northeast and [has] this lovely sort of berry, sweet, tart [flavor]. It's not so much grapey as it is — I tell people that it's like Blackberry Pie without the seeds."

They grow a lot of apples in the Northeast, and therefore they bake quite a lot of apple pies. Countless cookbooks tout apple pie recipes that claim to be the most delicious, the most flavorful, or the most time-tested — but this is the most unusual recipe that I have come across. It is a single-crusted pie with a streusel topping — both features of a typical Dutch-style apple pie. Sounds rather unremarkable, right? But it's not what goes into this pie that makes it exceptional — it's how you bake it. Once you've assembled the pie, you place it in a brown paper bag — a regular old grocery store bag does the trick — and seal it. The pie steams as it bakes, and the end result is fruit that is oh-so-tender. If you grew up in a house that was anything like mine, your parents probably kept a pile of brown paper grocery bags stacked under the kitchen sink or in a kitchen cupboard. I only wish that I had known about this pie when I was younger. Life would have been sweeter.

Preheat the oven to 425 degrees.

On a well-floured surface, roll out the dough until it is about 1⁄8-inch thick and will fit a 9-inch pie plate. Gently pick up the dough, center it over the pie plate, and ease it into the plate. Trim the edges of the dough to leave a 1-inch overhang. Fold the edges under, and then decoratively crimp the perimeter. Return the pie shell to the refrigerator to chill until the filling is ready.

Make the filling: In a large bowl, toss the apples with the sugar and the cinnamon. Pour in the lemon juice, and toss again. Add the flour and the cornstarch, tossing to coat the apples. Set aside.

Make the streusel: In a small bowl, mix the brown sugar, flour, cinnamon, and salt until blended. Add the butter, and use your fingers to work the butter into the mixture until it forms pea-size lumps. Set aside.

Remove the pie shell from the refrigerator, and pour the apple filling into it, shaking the pie plate to spread it out evenly. Pat the streusel topping onto the surface, covering the apples evenly.

Take a large brown paper bag, place the pie inside the bag, and fold the end of the bag over twice to close the opening. To secure it, staple or paper-clip the opening. Place the bag on a baking sheet and bake the pie for 45 minutes.

Remove the bagged pie from the oven. Carefully cut open the bag and remove the pie. Discard the bag, and return the pie to the baking sheet. Continue to bake for another 10 to 15 minutes, or until the streusel is golden brown. Remove the pie from the oven, and let it cool to room temperature before enjoying.

Note: Early on as the pie bakes, your kitchen will smell like paper. Don't worry — the scent of spiced apples will soon overtake the space.

I love the combination of chocolate and raisins. From Raisinets to a divine raisin-studded chocolate coffee cake that my parents used to buy me as a treat, chocolates and raisins are a match made in heaven. So when I saw this recipe in Jean Hewitt's New York Times Heritage Cookbook, I was more than a little excited.

Jean Hewitt got started at the Times in 1961 as an assistant to the venerable Craig Claiborne, head food critic for the paper. She went on to run the Times's test kitchen and to become a successful food writer in her own right, penning a number of cookbooks, four of which went on to win James Beard Awards. Heritage is a tome of a cookbook that explores the regional cuisines of the United States; it contains recipes for everything from soups, to casseroles, to the odd game dish, to breads, and, of course, to pies. First published in 1972, the cookbook is now out of print. If you ever spot a copy, I encourage you to buy it. The recipes recall dishes from another time — when food was not so processed and "fat" was not a bad word.

The original recipe for this pie, as featured in Heritage, came from Southern California, and I've stayed fairly true to it. I've altered only the amount of sugar (a little less) and the sort of chocolate used (semisweet). The pie is rich and sweet and, unlike most pies, actually gets better from sitting for a day.

Place the raisins in the freezer and chill them for about 30 minutes (this will make them easier to chop).

On a well-floured surface, roll out the dough until it is about 1/8-inch thick and will fit a 9-inch pie plate. Gently pick up the dough, center it over the pie plate, and ease it into the plate. Trim the edges of the dough, leaving a 1-inch overhang. Fold the edges under, and then decoratively crimp the perimeter. Return the pie shell to the refrigerator to chill until the filling is ready.

Remove the raisins from the freezer and combine them with the flour in a small bowl. Toss well to coat. (The addition of the flour dries the raisins out a bit and makes them easier to chop.) Roughly chop the raisins either by pulsing them in a food processor or a blender, or by chopping them by hand with a very sharp knife.

Combine the chopped raisins, heavy cream, chocolate, and butter in the top of a double boiler. Place the pan over simmering water, and stir until the chocolate has melted. Remove the pan from the heat.

In a medium-size bowl, mix together the eggs, vanilla, cinnamon, instant coffee granules, sugar, cornstarch, and salt. Add this to the chocolate mixture, stirring to mix well.

Bakewell tart is an English dessert — still popular today — with a long pedigree. The perfect not-too-sweet treat for afternoon tea, it's an almond sponge cake layered with raspberry jam. In the great history of Americans borrowing from other cultures, the transformation of Bakewell tart into pie has to be one of the happier adaptations. While this pie is an English transplant and could come from any one of the American colonies, its first mention is in the 1886 "receipt" book The Unrivalled Cook-book and Housekeeper's Guide, edited by the pseudonymous "Mrs. Washington" and published in New York City. Heirloom Bakewell pie recipes call for ratafia, a cordial made from the pits of cherries or peaches, or from bitter almonds. Instead of using this cordial, which is somewhat difficult to find, I use ground blanched almonds, which play off the raspberry jam beautifully. Try this pie, and don't forget to thank Mrs. Washington, whoever she — or he, for that matter — may have been!

On a well-floured surface, roll out the dough until it is about 1/8-inch thick and will fit a 9-inch pie plate. Gently pick up the dough, center it over the pie plate, and ease it into the plate. Trim the edges of the dough to leave a 1-inch overhang. Fold the edges under, and then decoratively crimp the perimeter. Spread the jam evenly over the bottom of the pie shell. Place the jam-lined shell in the refrigerator to chill while you prepare the sponge filling.

Using an electric mixer, mix the melted butter and the sugar in a medium-size bowl until blended into a pastelike consistency. Alternating, add the ground almonds and the eggs (one at a time) to the bowl, incorporating each before adding the next, and ending with an egg. Sift in the flour and salt, and beat until smooth. Fold in the almond extract.

Remove the jam-lined pie shell from the refrigerator, and pour the almond sponge mixture into it. Carefully place the pie in the oven. Bake for approximately 35 minutes, or until the crust and the surface of the pie are golden brown. Let cool for at least 1 hour before serving.