Accessibility links
When It Comes To Invention, This Guy Was No Rube Rube Goldberg's name has become synonymous with the American spirit of invention. No wonder: He was born on the Fourth of July. And what's more American than inventing new ways to get the ketchup onto the holiday hot dog?

Loosen An Egg From Its Shell: Why think simple when you can think gloriously complex? Courtesy of rubegoldberg.com hide caption

Loosen An Egg From Its Shell: Why think simple when you can think gloriously complex?

As we celebrate all things American on the Fourth of July, we often remember the great minds that have shaped our nation's history.

But this afternoon, as you're devising new techniques to get slow-moving ketchup from the bottle to your hot dog, you're also celebrating the birthday of another innovative American: Pulitzer Prize-winning cartoonist Rube Goldberg.

Born on July 4, 1883, in San Francisco, Goldberg began his career as an engineer for the City of San Francisco Water and Sewers Department. But plumbing clearly wasn't enough.

When he pursued his artistic passions and became a newspaper cartoonist, Goldberg used his practical understanding of mechanics to craft "inventions" that used a comically complex series of steps to accomplish a seemingly simple task. 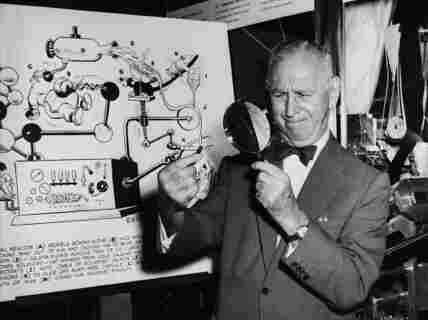 Goldberg gave up life as a sewer engineer to dream big. Courtesy of rubegoldberg.com hide caption 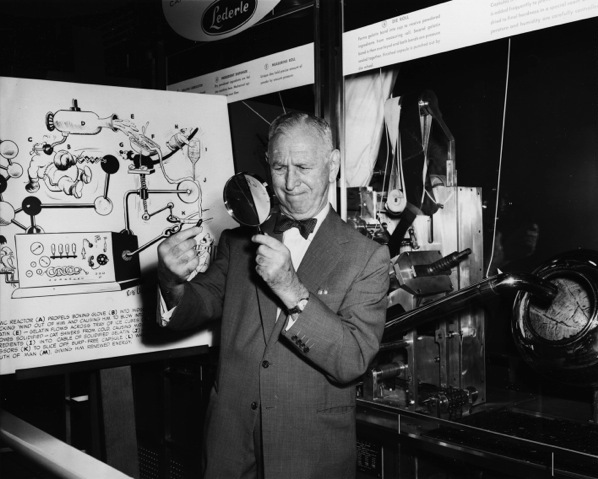 Goldberg gave up life as a sewer engineer to dream big.

"A Rube Goldberg machine is in its essence a trial-and-error thing," Adam Sadowsky, the president of Syyn Labs, an arts and technology organization, told Wired magazine in 2010. Syyn Labs was responsible for the design of a Rube Goldberg-inspired 2010 music video by the group OK GO, which has received more than 35 million hits on YouTube.

The impact of Goldberg's outlandish drawings extend beyond mere entertainment, and have inspired an annual contest for engineering students, held at Purdue University. This year's winners, a team from St. Olaf College, developed a 191-step apparatus to inflate and pop a balloon.

Goldberg's name has even become synonymous with using a complex solution to attack a simple problem.

In the spirit of Goldberg, America's inventors are more prolific than ever. Last April, the United States Patent and Trademark Office celebrated patent application No. 8,000,000, and in 2011 alone, the office received more than 500,000 utility patent applications. Nearly half of these "patents for invention" were submitted by American inventors.

So, back to that ketchup problem at the family picnic: Before you break out the gears and levers, rest assured, innovative MIT researchers are working on a food-grade ketchup bottle lubricant that may soon be coming to a refrigerator near you.

What do you think will be the next everyday inconvenience to inspire an unconventional solution?