Accessibility links
Fear Of Fires Fizzles Some July Fourth Fireworks Fun This year, three-quarters of the country are experiencing some level of drought, and many cities are temporarily banning fireworks. But restrictions may not keep committed revelers from the rush of lighting a fuse. 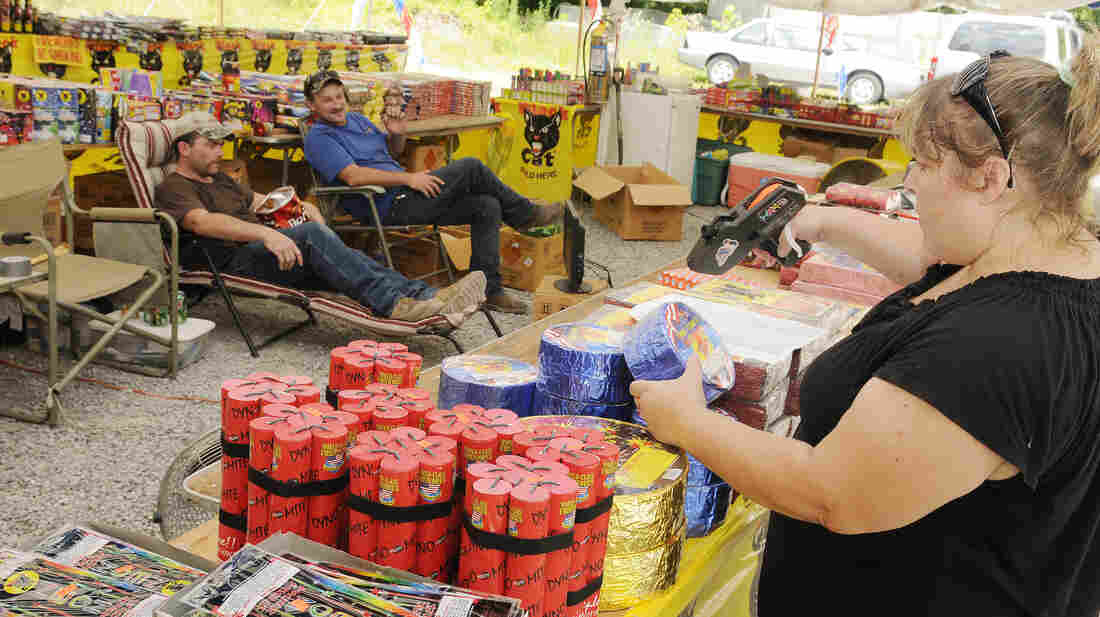 Susan Underwood prices fireworks, while her husband Michael (left) and Clint Simmons pace themselves with a snack and TV last month at their tent along Highway 416 in Sevier County, Tenn. Over in Middle Tennessee, the drought has led city leaders to ban fireworks this year. Curt Habraken/AP hide caption

Freddie Bowers and his dad, Larry, have sold fireworks in LaVergne, Tenn., for a lifetime. But, the sparklers are off limits this year since the region has had the hottest streak in recorded history and several small fires in the area have been blamed on fireworks.

For people in the fireworks business, Christmas usually comes in July. Only this year, three-quarters of the country are experiencing some level of drought and from the Mountain West to the Southeast, cities are temporarily banning fireworks.

Good luck, however, keeping the Bowers — admitted pyros — out of their stash.

Larry is prepared to pay a price for the rush of lighting a fuse.

Pyromania: An Ode To American Fireworks

"I do it because it's my Independence Day," he says. "And whether I shoot one firework or 10, I don't want to break that tradition. I'm not going to. They're just going to have to fine me if they catch me."

In many cities where fireworks are already illegal, enforcement is practically nonexistent. Police in Nashville handed out just one citation last year. But now, there's a "no tolerance" policy. Temporary bans are in place in more than a dozen nearby cities, like Murfreesboro. Assistant City Attorney David Ives says it was too late to revoke permits purchased by vendors, so people can still buy fireworks.

"But they cannot use them and actually will not be able to use them until the New Year season," Ives says.

And though it may seem silly to think people are buying fireworks and holding them until Christmas, Ives says city leaders did what they needed to do "to protect the community."

Some municipalities have even postponed public fireworks displays, including Terre Haute, Ind., and several communities near Lansing, Mich. Major cities — such as Louisville and Indianapolis — have pulled the plug on backyard fireworks for this year. That's expected to result in a drop off in sales, which industry-wide approached $1 billion in 2011.

It's putting the pinch on guys like Kent Goolsby, who works on commission and sleeps at his tent to protect the stock. Goolsby has what was a prime location before the local ban.

"Being right here, there's almost no reason for people to come here if you can't shoot 'em," he says.

Back at the Bowers' tent, customers are at a trickle. Some people, such as university student Elsie Bennett, are trying to be good citizens.

"I'm having a little party, so I figure we better just stick with sparklers and fountains and color bombs, and that's about it," she says. "I wish we could do something crazy, but that's about it."

But others don't seem too concerned about getting caught with contraband. Steven McShand says his wife will keep the water hose handy.

"I don't see nothing wrong with letting kids enjoy the things we've passed down with generations," says McShand, who has a young son, Justin. "I always enjoyed popping fireworks with my parents."

Ban or not, McShand says he and Justin will share the magic of lighting that first fuse together.