Accessibility links
Beyond The Music In St. Louis Cemetery No. 2 A New Orleans socialite donated space in her family's mausoleum in the city's famous St. Louis Cemetery No. 2. Now, the final resting place of a white, aristocratic family is also the eternal home of black musical royalty: Ernie "Emperor of the Universe" K-Doe and Earl King. 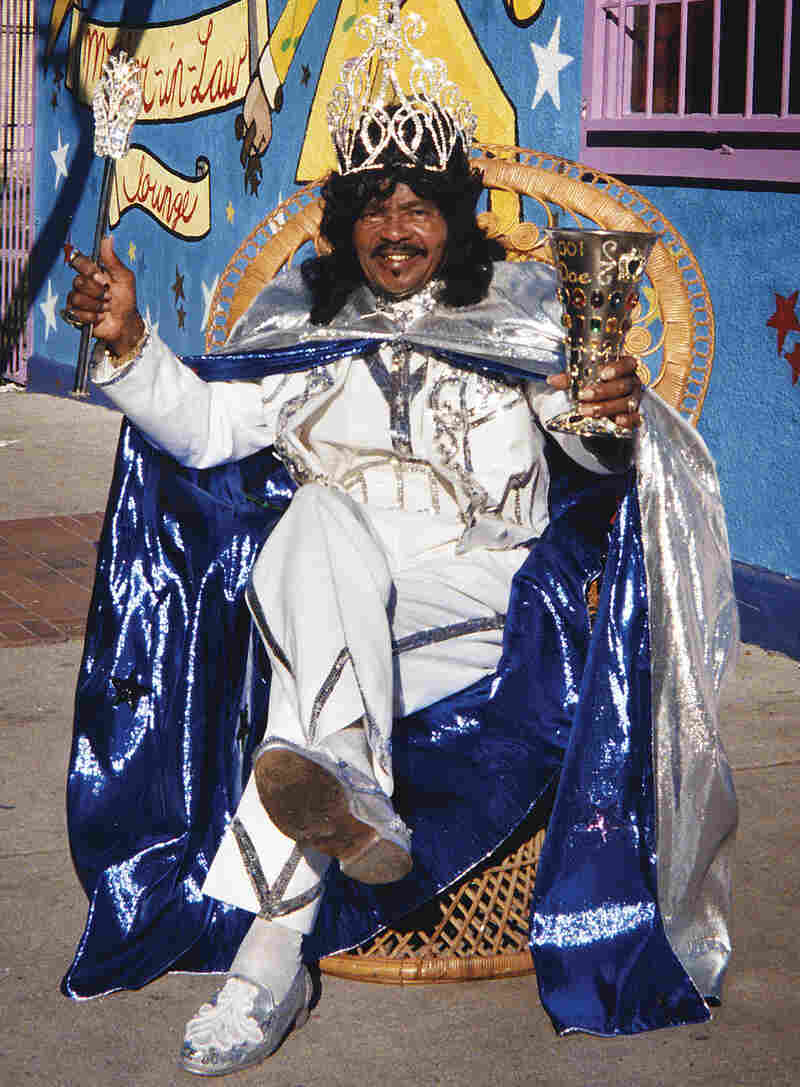 Ernie K-Doe poses outside his Mother-In-Law Lounge during Jazz Fest in New Orleans in 2001. He died a few months later and was buried in St. Louis Cemetery No. 2. Pat Jolly/AP hide caption 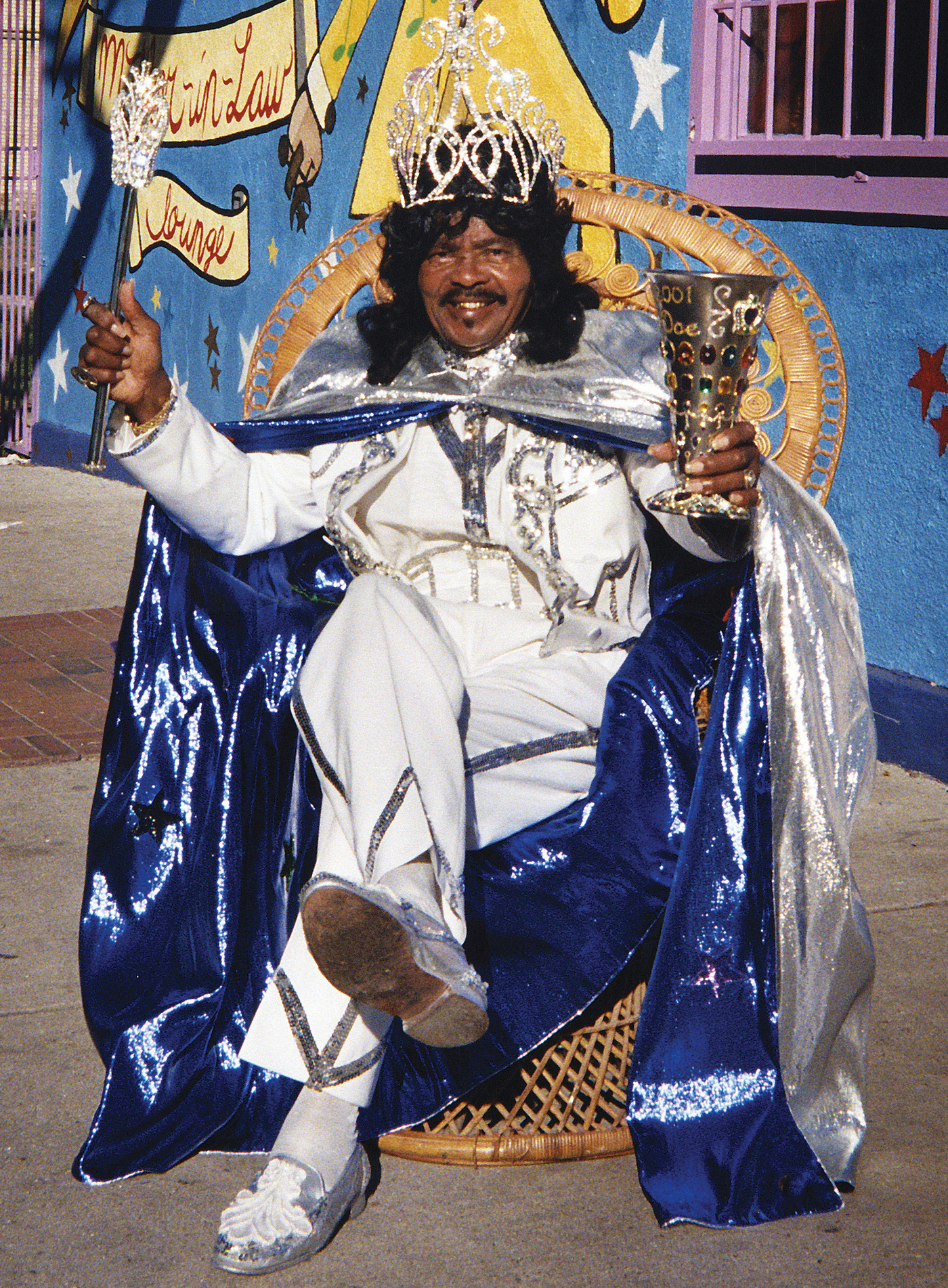 Ernie K-Doe poses outside his Mother-In-Law Lounge during Jazz Fest in New Orleans in 2001. He died a few months later and was buried in St. Louis Cemetery No. 2.

There's so much water in, around and underneath New Orleans, that the dead spend eternity in tombs above ground.

Most of the tombs now have a similar design: On top, there's space for a wooden coffin or two, and at the bottom lies a potpourri of decanted family remains. Sooner or later, whoever is up high must vacate and settle lower, making room for the newly dead. That's how families stay together — in a desiccated jumble of grandpas, grandmas, siblings and cousins.

Well, in one of the city's oldest cemeteries, the final resting place of a white, aristocratic New Orleans family is also the eternal home of black musical royalty: an emperor, a king, a consort and a mother-in-law.

From Chitlin' Circuit To Pop Charts

In 1961, Ernie K-Doe managed something that no one from New Orleans had ever done before — not Fats Domino, not Louis Prima, not even Louis Armstrong at that point. K-Doe scored a No. 1 pop hit with a song about his — and apparently a lot of other people's — mother-in-law:

She's the worst person I know

She worries me so

If she'd leave us alone

We'd have a happy home

Sent from down below

" 'Mother-in-Law' was No. 1 on the R&B charts for five weeks," says Ben Sandmel, who wrote Ernie K-Doe, The R&B Emperor of New Orleans. "It was No. 1 on the pop charts for one week. This is when the black and white music worlds were considered to be very separate. And he went from playing the Chitlin' Circuit and being a local artist to having huge success in a very short time." 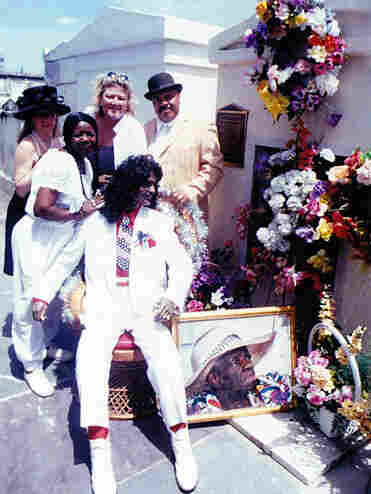 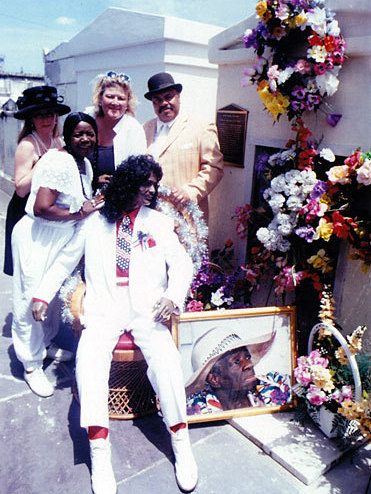 K-Doe maintained that only three songs would stand the test of time: "Amazing Grace," "The Star-Spangled Banner" and "Mother-in-Law," because, as he put it, "There's gonna be mothers-in-law until the end of time."

"He was young, he was in great shape ... did all the microphone tricks and the dance moves that had been made famous by James Brown and Jackie Wilson. And he would take whatever material was put in front of him and just sing the hell out of it," he says.

But to most who knew him, Ernie K-Doe had a problem with self-esteem: He had too much of it. He even challenged James Brown to a showdown in New Orleans. Later, K-Doe declared himself "Emperor of the Universe."

Ernie K-Doe never returned to the top of the charts. Instead, he hit bottom, facing alcoholism and homelessness. But in the late 1990s, K-Doe and his wife, Antoinette, opened a club and had a growing cult of young followers.

Then on July 5, 2001, Ernie K-Doe surprised nearly everyone when he died of cancer.

"I was hugging and kissing on Antoinette and doing the typical thing, 'What are you going to do? Where are you going to bury him?' " says Anna Ross, a champion of cemetery preservation in New Orleans, who paid a call on K-Doe's widow when he passed away. 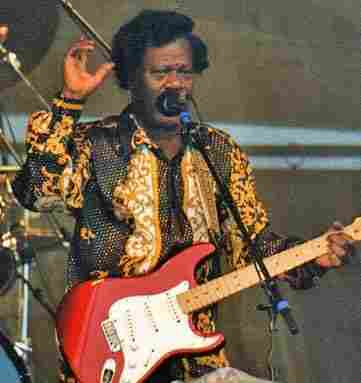 Earl King on stage at the 1997 New Orleans Jazz & Heritage Festival. He died a few years after Ernie K-Doe, and now the two share a tomb. Masahiro Sumori/Wikimedia hide caption

St. Louis Cemetery No. 2 is prime real estate in New Orleans and dates all the way back to Reconstruction. By happy coincidence, Ross' then-21-year-old daughter had just inherited a family tomb there. So young Heather Twichell offered the K-Does a berth, and Antoinette accepted.

"Then there was this gossip running around town: 'What is this white woman and her daughter and Antoinette doing? They burying a black man in a white man's tomb,' " Ross says. "My daughter thought it was the right thing to do. So we went ahead and had a funeral. People were dancing on top of tombs and vaults around here. It was wild."

The funeral was as grand as the Emperor had hoped. Thousands came to see Ernie K-Doe's services at the city's most regal hall. The second line parade to the cemetery was so long, it shut down the central business district. And sure enough, K-Doe's coffin desegregated the Twichell family tomb.

Ernie's second mother-in-law — Antoinette's mother — joined him in the tomb shortly thereafter. He liked her. A couple of years later, Twichell opened the door again and welcomed a King.

Ernie K-Doe may have had a national No. 1 hit, but Earl King was by far the greater artist. By the time of his death — on April 17, 2003 — King had written briefcases full of blues and R&B standards, including this one:

There's been some lonely, lonely nights

Lay my head on my pillow

How I cry all night long

The things you used to say to me

I thought that we would never part

Yes, you know I love you darling

Why did you break my heart?

Johnny Guitar Watson, Robert Palmer and Teena Marie were among the many who recorded Earl King songs. As was Jimi Hendrix. Remember "Come On (Part 1)"?

People see me but they just don't know

What's in my heart and why I love you so

I love ya baby like a miner love gold

So come on baby, let the good times roll

And then there's the Mardi Gras anthem that King wrote for his mother, "Big Chief." If you ever go to New Orleans and don't hear "Big Chief," then you should ask for your money back, because somebody took you to the wrong town.

"I'd rank Earl King at the very top in importance of anybody we ever recorded," says Hammond Scott, who was a co-owner of Blacktop Records and recorded King in his later years. "He was one of the most unique songwriters that came out of New Orleans and that ever will. He was dynamite."

Scott calls Earl King a complete artist — singer, songwriter, guitar player, raconteur, cartoonist and beautician. When King died, a horse-drawn hearse carried him to glory and his tomb in St. Louis No. 2.

Antoinette K-Doe joined King, her husband, her mother, and the Twichell ancestors in the tomb in 2010. Heather Twichell says when her time comes, she plans to join the cast of characters inside.

"I'm having a party," she says. "I mean, Earl King and Ernie K-Doe are up there. Miss Antoinette. Hopefully she'll be making some gumbo and her ridiculously strong coffee when I get up there. I'm gonna be cremated and jump on in."

Whether she gets a word in edgewise is another matter entirely.

Gwen Thompkins is the host of member station WWNO's Music Inside Out.