Accessibility links
AIDS In Black America: A Public Health Crisis AIDS is the primary killer of African-Americans ages 19 to 44, and the mortality rate is 10 times higher for black Americans than for whites. A new Frontline documentary explores why. 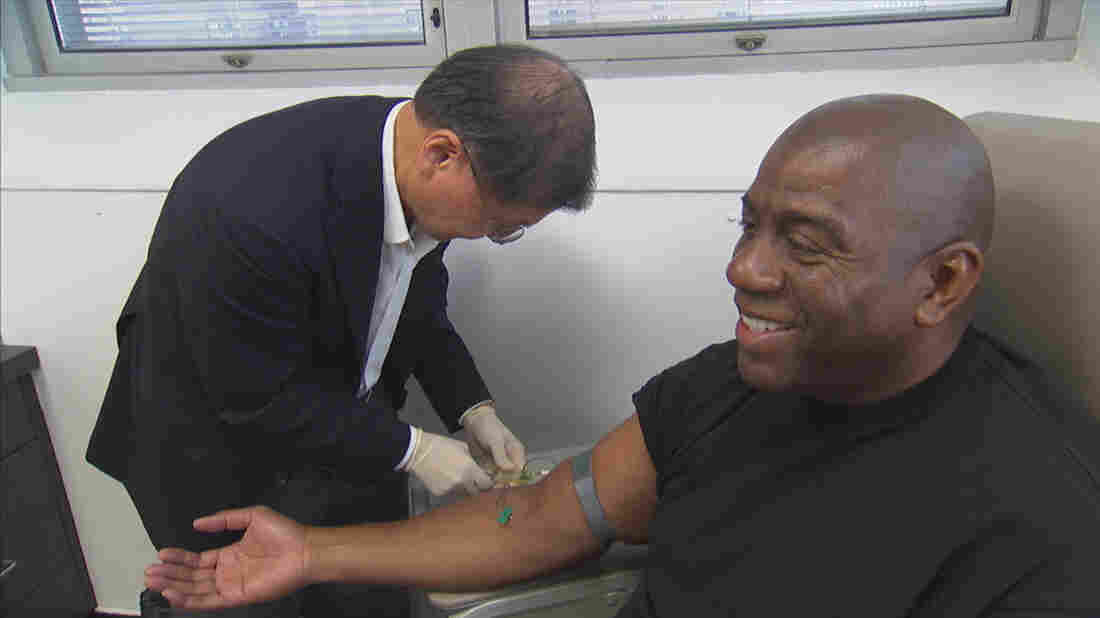 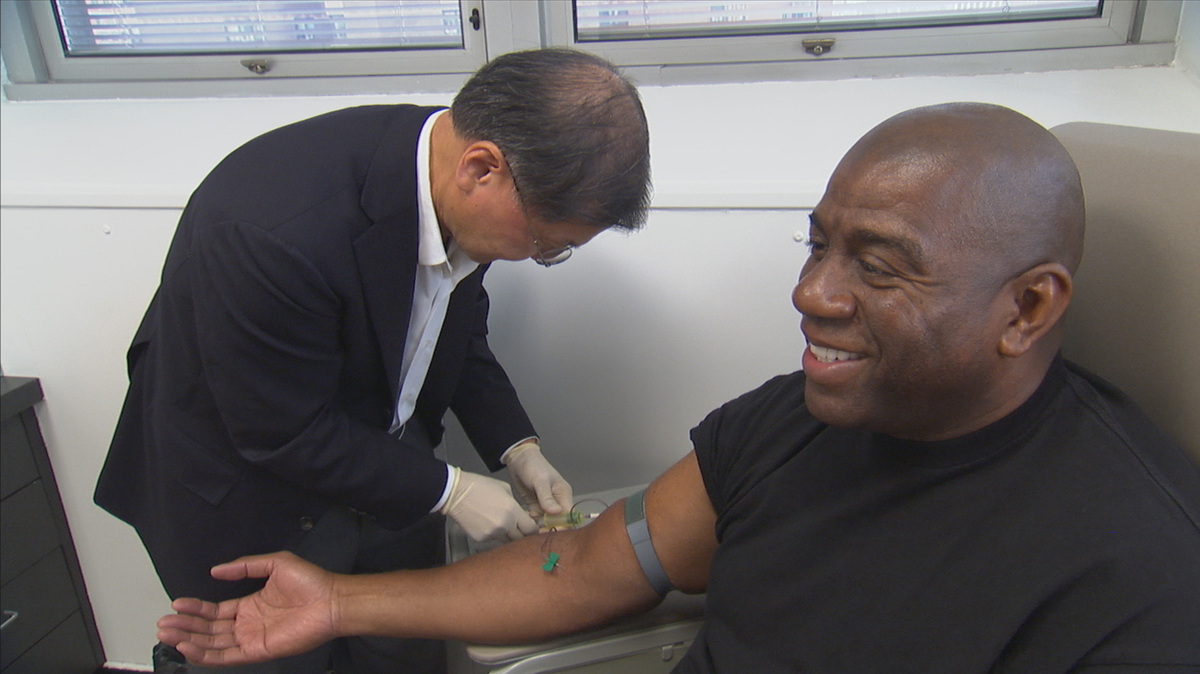 Dr. David Ho, an HIV/AIDS specialist, draws blood from Magic Johnson, one of the people featured in Endgame: AIDS in Black America.

Of the more than 1 million people in the U.S. infected with HIV, nearly half are black men, women and children — even though blacks make up about 13 percent of the population. AIDS is the primary killer of African-Americans ages 19 to 44, and the mortality rate is 10 times higher for black Americans than for whites.

Saving The Heart Of The Crescent City

Saving the Heart of the Crescent City

A new Frontline documentary, Endgame: AIDS in Black America, explores why the HIV epidemic is so much more prevalent in the African-American community than among whites. The film is produced, written and directed by Renata Simone, whose series The Age of AIDS appeared on Frontline in 2006.

On Thursday's Fresh Air, Simone is joined by Robert Fullilove, a professor of clinical sociomedical studies at Columbia University's Mailman School of Public Health, and chairman of the HIV/AIDS advisory committee at the Centers for Disease Control and Prevention.

"When I started doing this work in 1986, roughly 20 percent of all of the people in the United States who were living with AIDS were African-American," Fullilove tells Fresh Air's Terry Gross. "The most recent statistics from the Centers for Disease Control indicate that 45 percent of all the new cases of HIV infection are amongst African-Americans. ... If we continue on the current trend, in the year 2015, especially in the South, it will probably be the case that 5 to 6 percent of all African-American adults who are sexually active will be infected with the virus."

Endgame explores how politics, social factors and cultural factors allowed the AIDS epidemic to spread rapidly in the African-American community over the past three decades. The film — shot in churches, harm-reduction clinics, prisons, nightclubs and high school classrooms — tells personal stories from children who were born with the virus, public health officials and educators who run HIV clinics, and clergy members around the country, many of whom have been divided on their response to the epidemic.

The film also explores how the war on drugs in the 1980s and 1990s affected the spread of HIV in communities where large percentages of African-American men were incarcerated. 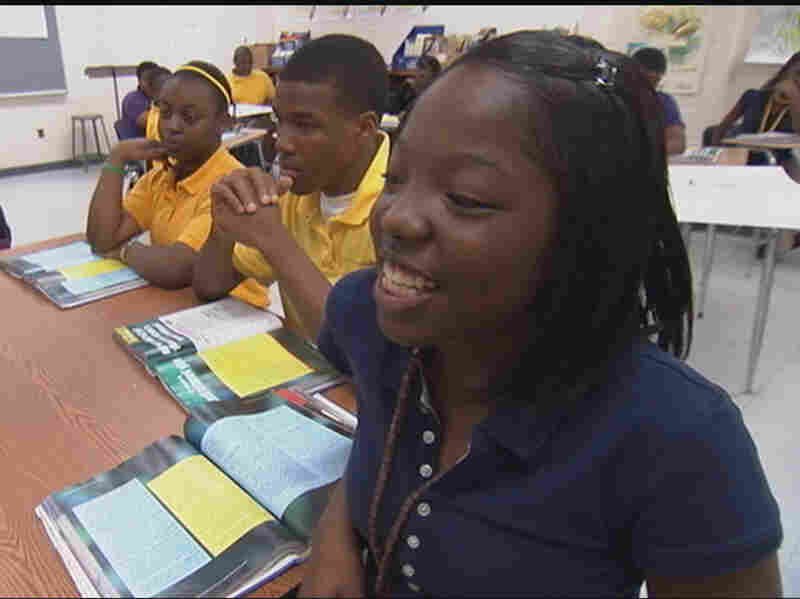 Alabama is one of only 33 states that mandates HIV education in high schools. Among those states, students receive an average of 2.2 hours of education, and most focus on abstinence. Frontline/Renata Simone Productions hide caption 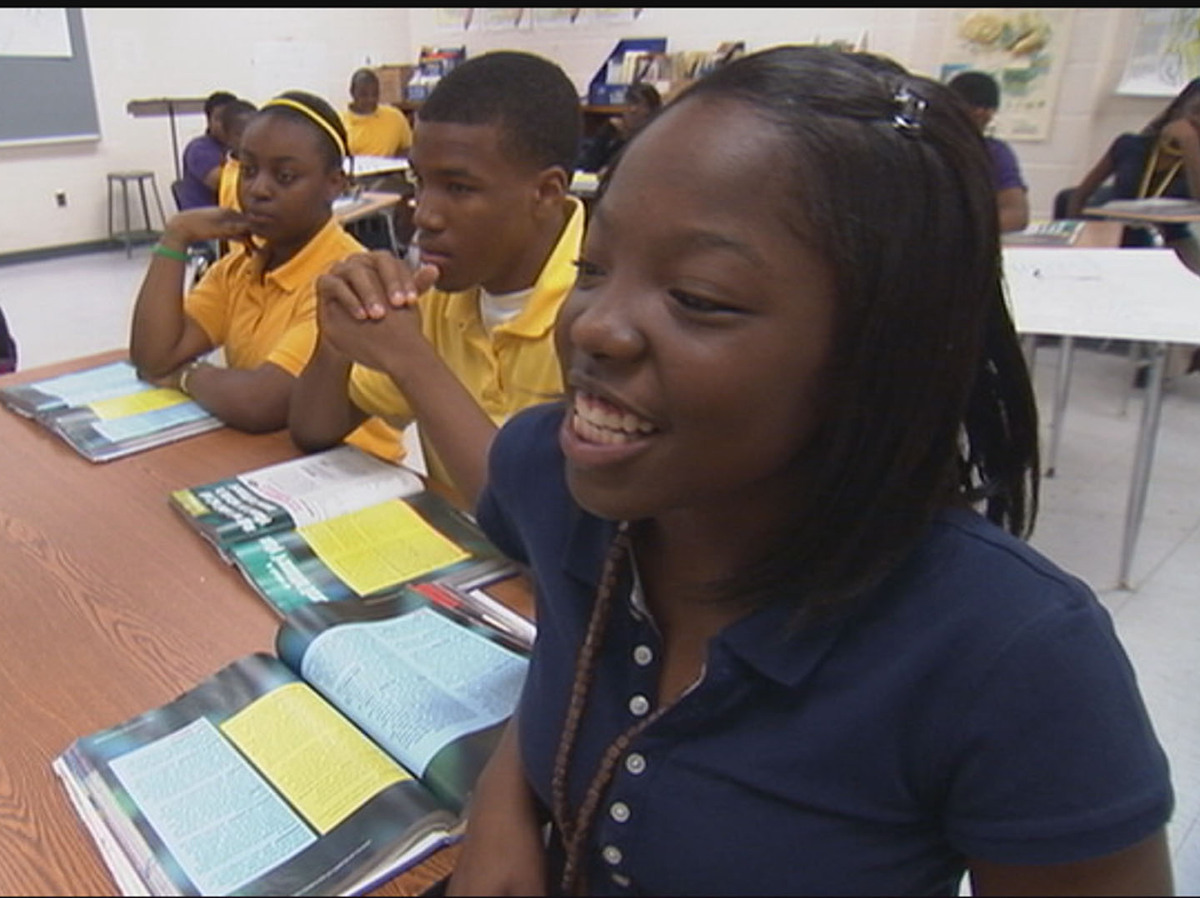 Alabama is one of only 33 states that mandates HIV education in high schools. Among those states, students receive an average of 2.2 hours of education, and most focus on abstinence.

"A large number of marriageable men were taken out of the community," Fullilove says. "When you have this kind of population imbalance, many of the rules that govern mating behavior in the community are simply going to go out the window. The competition for a man becomes so extreme ... all of the prevention measures [like condom usage] that we've been trying to create over the last 30 years go out the window."

Only 3 percent of the federal domestic dollars spent on HIV go toward prevention, according to Simone.

"We still have a long way to go in policy terms," she says. "What I tried to do in the film is help a general audience see that this is an epidemic not just of drug users and people who are sex workers. This is an epidemic that affects people who make you think, 'But for the grace of God, there go I.' There's a 64-year-old grandmother, there's a woman who works in a restaurant, there's Magic Johnson. ... Right now, today in 2012, this is an epidemic of people that we recognize and, if our lives were any different, we could be."

On how AIDS, once called Gay-Related Immune Deficiency (GRID), was presented in the media during the early days of the epidemic

"The name itself gave rise to the notion that this was something that was affecting Americans from a particular community, identified by their sexual preference, separate and apart from folk in black communities like Harlem or Watts were experiencing themselves. The presentation in the press was of a white epidemic."

On secrets in the African-American community

"We were so much afraid of what it meant to have what was happening in the slave quarters revealed to those who were empowered to direct every aspect of our lives. So we became secretive, because if there was dissension, if there was anger, the last thing you wanted to do was to make it public. To make it public was to be punished. So it created the notion that silence was indeed golden. And to the degree that carried over well after slavery had ended, that did us a fundamental disservice when the epidemic began."

"Sharing needles for intravenous drugs was a primary means by which many people became infected. It is especially important, in the African-American community, to understand that in the late '80s and early '90s, roughly 40 percent of the cases of AIDS were basically identified among people whose major risk behavior was intravenous drug use. Between 1970 and 2010, we made a practice of making the war on drugs, which meant we were locking up the folks who were at greatest risk for being exposed to this virus."

Recognizing that the problem exists but not making moves to prevent terrible things from happening, like the transmission of HIV, means that more than anything else, we had a situation where prevention could have worked. We didn't seize the opportunity, and in failing to seize the opportunity, we're now living with the consequences.

"The simple fact that we're not taking appropriate public health measures to prevent the transmission of this virus means that in the very beginning of the epidemic, prisons became places where the virus had to have become transmitted freely. The danger, of course, in this kind of discourse is to demonize and stigmatize prisoners. I think it's probably more important to think about putting the onus for taking public health measures to prevent this kind of tragedy from happening on the folk who are responsible for running the prisons. Recognizing that the problem exists but not making moves to prevent terrible things from happening, like the transmission of HIV, means that more than anything else, we had a situation where prevention could have worked. We didn't seize the opportunity, and in failing to seize the opportunity, we're now living with the consequences."

On the attitude in some black churches

"In 1964, I was part of something called Mississippi Freedom Summer. I was a field secretary for the Student Nonviolent Coordinating Committee. I worked in a number of counties in Northern Mississippi, and really got a sense of the importance of the church and its capacity to galvanize community support around, for example, getting people to register to vote. When I started doing research and community work in HIV in the 1980s, I, like many folk working in the black community, went first to the church and said, 'Hey, we have another problem that really requires the galvanization of all elements of the community. You're the only institution left standing that really has the capacity to bring us all together. Let's get all this work done.' And what we were met with was an enormous amount of resistance. There were many, many folk who were clear about the importance of what we were doing, but they were in the minority. The vast majority were either unaware or uninterested or worse, were extremely homophobic — saw this as a gay problem that had nothing to do with them and were much more likely to engage in the kind of preaching [that was harmful] than just about anything else."

On the Affordable Care Act

"It's thought that maybe 20 percent of all African-Americans who are living with HIV/AIDS don't know that they're infected. And they don't know that they're infected because they haven't been tested. If the act is successful in increasing the rate at which people get regular checkups, become aware of their status and enter treatment, then I think we're going to see an important change in the direction of the epidemic. It's sad to say that prevention, right now in the U.S., is neatly characterized by the phrase: 'Treatment is prevention.' If you're in treatment and your viral load has been lowered, you're very unlikely to pass the virus onto someone else. It means we've taken a step back — we've acknowledged that there are some folk that are already infected, and the best we can do is make sure they don't infect someone else. That's a real tragedy compared to where we were in the 1980s, when we thought keeping folk from being infected in the first place was going to be our primary goal and objective."