Accessibility links
At Last, Superheavyweight Finds Her Olympic Niche Athletic since she was a toddler, Holley Mangold has been dreaming of Olympic glory for nearly as long. It took the onetime football star years to find the sport that would take her to the Olympics. Now 22, 350-pound Mangold has qualified for the U.S. women's Olympic weightlifting team. 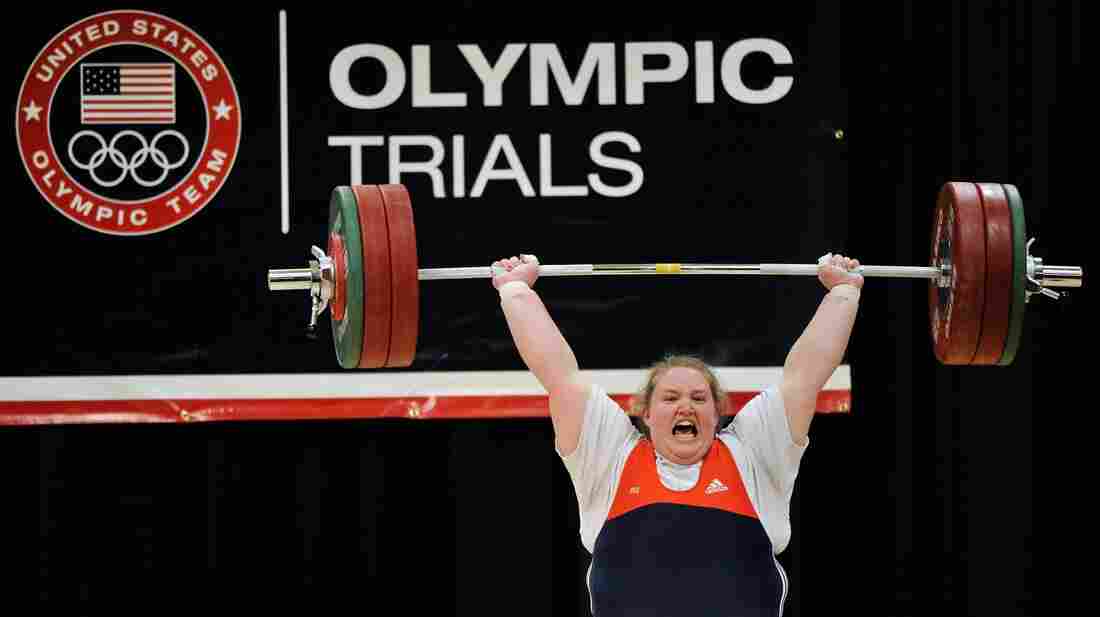 Holley Mangold successfully completes the 145 kilogram "clean and jerk" lift at the trials for the U.S. Olympic women's weightlifting team in March. Mangold came to weightlifting after trying her hand at several other sports. Jamie Sabau/Getty Images hide caption 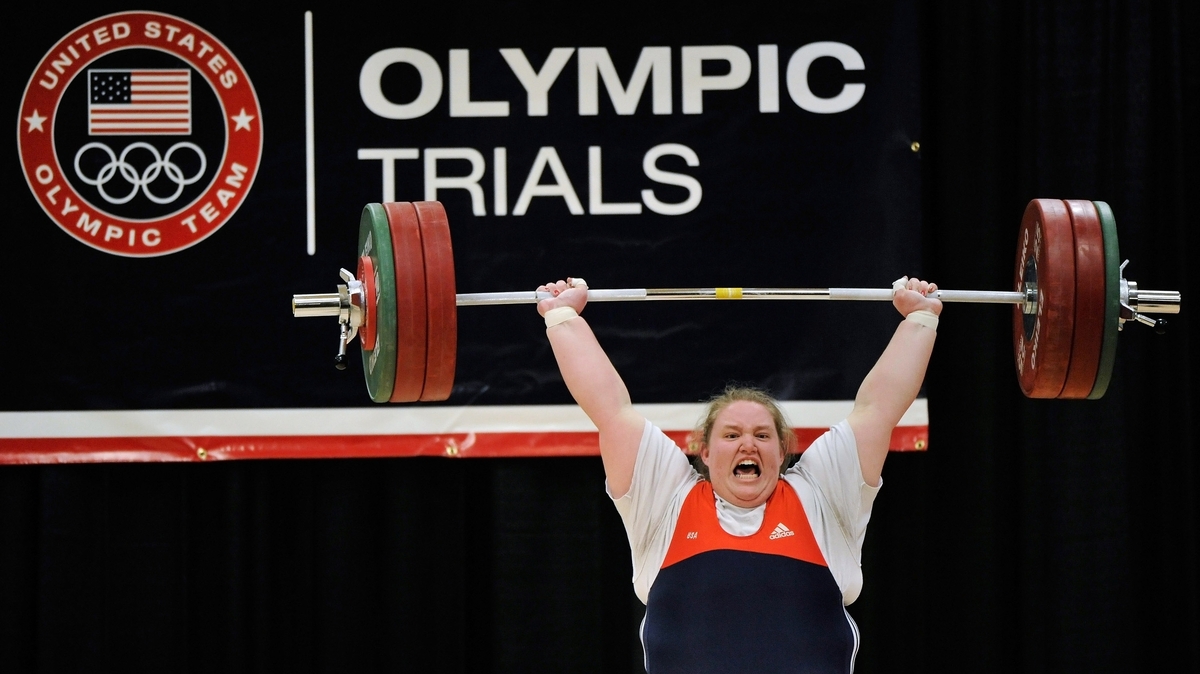 Holley Mangold successfully completes the 145 kilogram "clean and jerk" lift at the trials for the U.S. Olympic women's weightlifting team in March. Mangold came to weightlifting after trying her hand at several other sports.

Near the back of the North YMCA in Columbus, Ohio, several men and women line up on a row of beat-up platforms. They take turns practicing the two lifts that make up Olympic weightlifting; the "Snatch," and the "Clean and Jerk."

The goal? To hoist large amounts of weight from the floor into an overhead position.

Among the lifters here is 5-foot-8 inch, 350-pound Holley Mangold. She is the epitome of power, in appearance, attitude and athletic ability.

Ever since I was a little kid I wanted to be in the Olympics. I just hadn't found the sport that was going to take me there ... Now with weightlifting, I finally have found what I've been missing all those years.

Mangold, 22, has spent years trying on different sports in pursuit of her Olympic dreams. When she finally tried her hand at weightlifting, she knew she'd found her calling.

Shopping Around For The Right Fit

Women first began competing in Olympic weightlifting in the 2000 Games in Sydney, Australia. While two American women won medals that year, the U.S. women's team has not brought one home since.

Marigold hopes to break that streak this summer.

Today at the North YMCA, Mangold is focusing on technique.

"Obviously, my strength isn't going anywhere. So I'm just trying to be technically together and also get my mind right."

But before "getting her mind right," Mangold spent a lifetime just trying to find the right sport.

"Honestly, ever since I was a little kid I wanted to be in the Olympics. I just hadn't found the sport that was going to take me there yet," Mangold says. "At first I thought it was gymnastics, but you know, my body wasn't really built out for that one. 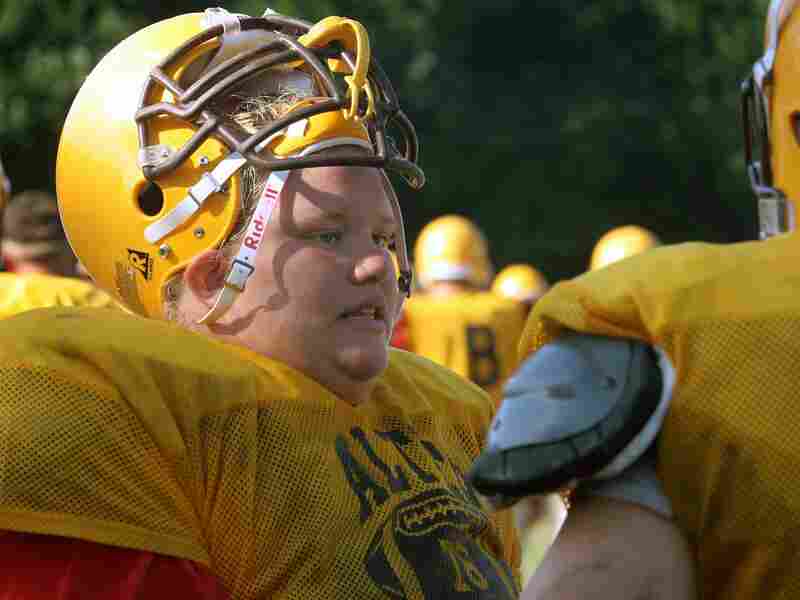 Holley Mangold played football for 12 years in her hometown of Kettering, Ohio — including with her high school varsity team. Skip Peterson/AP hide caption 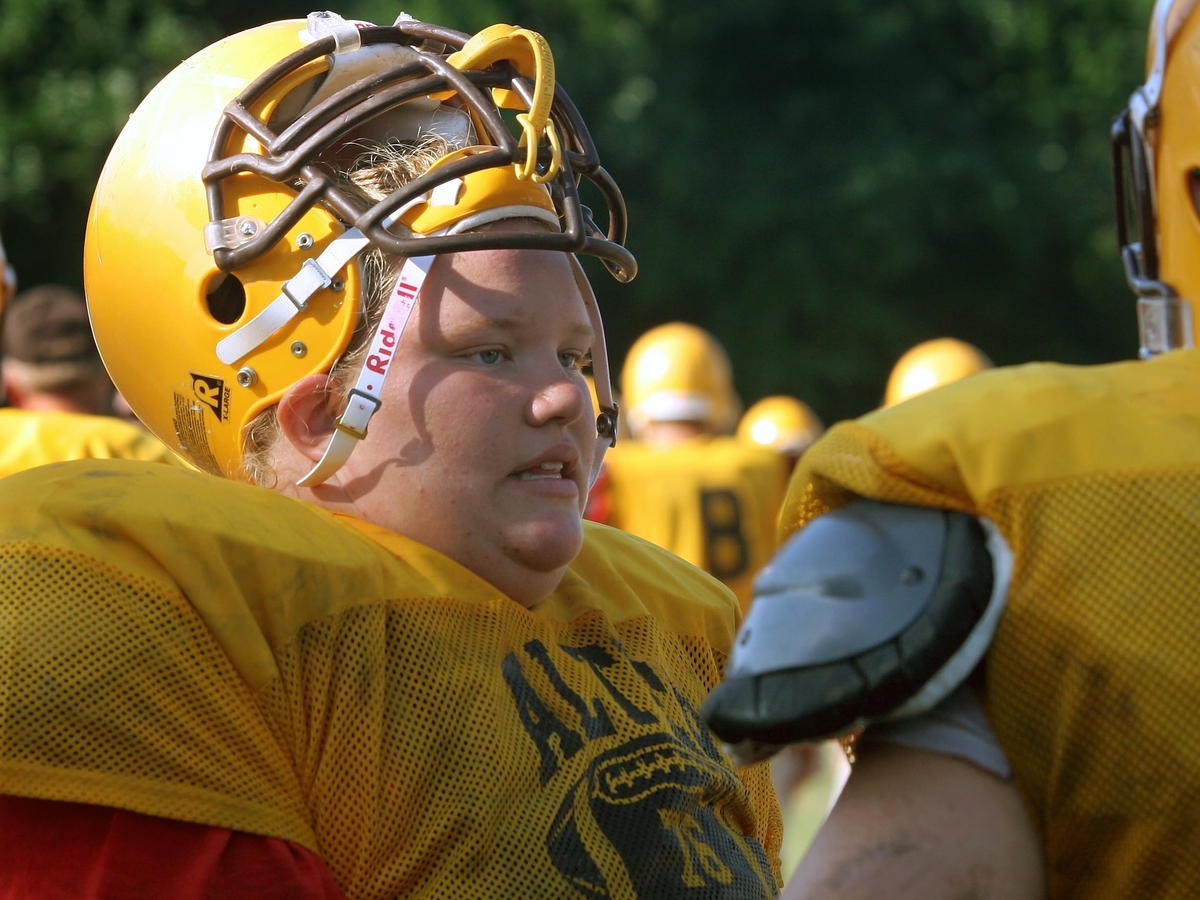 Holley Mangold played football for 12 years in her hometown of Kettering, Ohio — including with her high school varsity team.

If Mangold was missing any passion growing up, that fact was lost on her mom, Therese Mangold. She recalls taking Holley ice-skating and skiing at the age of 3.

"She liked to go fast [while skating]. It didn't bother her at all if she fell," Mangold says. "And skiing was like that, too. I took her skiing probably when she was 5 or 6, and I held her in between my legs as we're going down the hill.

"She was mad at me for holding on to her, and she's swatting me off, so I finally said 'Forget it,' and I let go of her."

From Football To Weightlifting

Mangold made it down that hill just fine. She then moved on to roller-skating, softball, volleyball and then football. She played football for 12 years in her hometown of Kettering, just outside Dayton, Ohio.

Mangold's inspiration was her brother Nick Mangold, a center for the New York Jets, but she was making her own mark in the sports world in no time.

She became the first girl to play on the offensive line in a high school state championship game. By the time she graduated in 2008, she held several state and national records in the strength sport of powerlifting.

"Holley is one of the strongest females I've ever met," says former world powerlifting champion Larry Pacifico. He coached her in the sport while she was still in high school.

"She went up to the state meet and set all the records that have ever been set; squatted 525 pounds, benched 225 and dead-lifted 400 pounds," Pacifico says.

Holley's dream to compete in the Olympics propelled her from powerlifting — a non-Olympic sport — to weight lifting.

The media spotlight followed. She appeared on an episode of MTV's True Life, and she's been featured prominently on ESPN and other media outlets.

Mark Cannella, president of the Columbus Weightlifting Club, has been coaching Mangold at the North YMCA for the past year and a half. Initially, he planned to prepare Mangold for the 2016 Olympics — but the young weightlifter got better fast.

"The way she progressed, and the way she was moving with the weights, we knew right then that she had a shot at 2012," Cannella says.

Mangold is also trying to keep her expectations for London in check. She says gold is out of the question. The top two international competitors are lifting about 66 pounds more than their closest counterparts.

While setting a personal record may be Mangold's most obtainable goal, she still wants a medal.

"I really would like to medal at the Olympics," she says. "I'd like to get bronze, and that's what I'm shooting for.

"Are my goals going to happen? I don't know. But I'm still gonna shoot for them."