Accessibility links
Fake Bylines Reveal Hidden Costs Of Local News Major newspapers in Chicago, Houston and San Francisco are among those that have acknowledged they published dozens of items in print or online that appeared under fake bylines. The items in question were not written by reporters at the papers but by employees of a news outsourcing firm called Journatic. 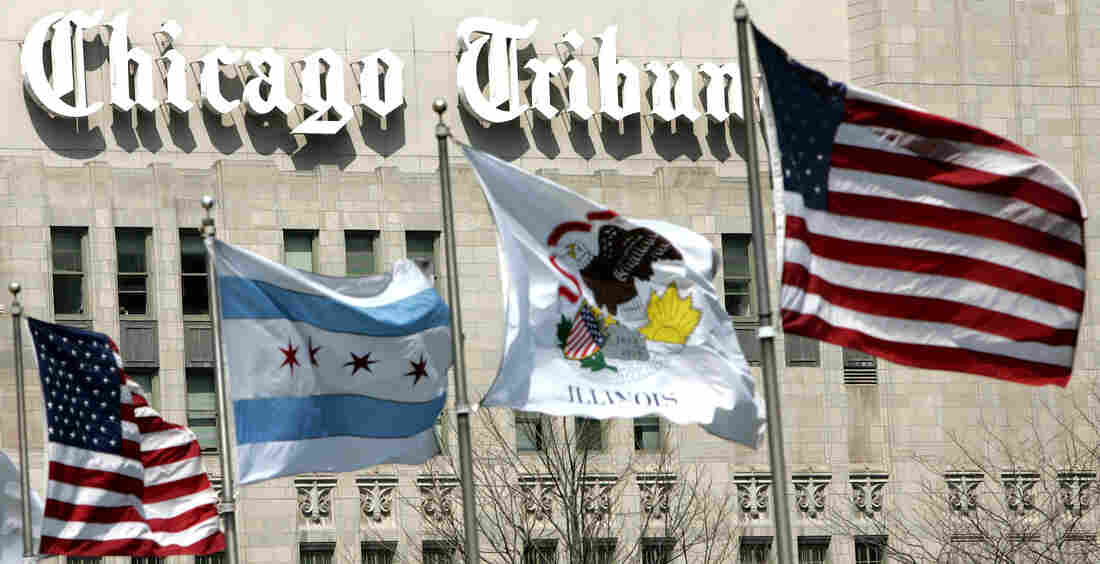 Major newspapers in Chicago, Houston and San Francisco are among those this week that have acknowledged they published dozens of items in print or online that appeared under fake bylines.

As was first disclosed by the public radio program This American Life, the items in question were not written by reporters on the staffs of the papers at all but by employees of what is effectively a news outsourcing firm called Journatic.

The episode is at once a professional embarrassment for the papers and a reminder of an inescapable truth about the cost of gathering local news: Sometimes when you cut costs, you can't avoid cutting corners.

"How do you get police blotters from 90 towns? It's not easy. But that's what we do," says Brian Timpone, a former television reporter and small-town newspaper owner who created what became Journatic six years ago.

He built a company to provide a lot of news and information — mostly highly granular information — for publishers serving small communities around the country. The information in question involves such stuff as lives are made of: information about local arrests, real estate sales, weekly school lunch menus, high school track-meet results. 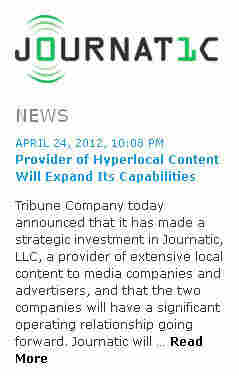 A screenshot of the Journatic website, announcing the company's deal with the Tribune Co. Journatic.com hide caption

Even large papers with supposedly deeper pockets struggle for a solution.

"These are the challenges that newspapers face every day," Timpone says. "They're the most important ones, in our opinion. And we help you solve them."

News executives at the papers, and their parent companies, declined to talk about the specific incident, though each published news articles or statements about the episode. The Chicago Tribune, for example, said the matter is under investigation. But the newspaper's corporate parent, the Tribune Co., is a new investor in Journatic — evidence of its appeal. (Several other papers in the chain also rely on its services.)

Journatic has dozens of clients, many of them strapped for cash but all hungry to serve up local news for their readers. Many of the Hearst Co.'s papers are also subscribers. The Chicago Sun-Times had an arrangement that was to expire because of the investment by the rival Tribune Co. but announced it would sever its affiliation instantly in the wake of the radio program's report.

Critics argue that Journatic is operating on a fundamentally flawed premise.

"It's a short-term cost-cutting measure, and that's all it is," says Tim McGuire, the former editor-in-chief of the Minneapolis Star Tribune, who now teaches media business and journalism ethics at Arizona State University's Cronkite School of Journalism and Mass Communication. "It's not a long-term solution to providing local news to people who want it."

The company also hired more than 100 people abroad as a way of keeping costs down. That means people in Asia are writing about real estate in the Bay Area — and sometimes under fake bylines. Raw data appear in list form; small articlelike items a few paragraphs long also incorporate personal data such as alma maters and employers gleaned from Google searches or professional social media sites such as LinkedIn.

Journatic freelancer Ryan Smith told This American Life that he reworked pieces written by foreigners who were paid a pittance for their trouble and that he had written his own stories for papers in places he had never visited.

"I don't know those communities, and I have no stake in them. And so it didn't matter to me that I found out all the information and I got it right," Smith said. "There is just something inauthentic about the whole process. And the picking of fake names for these writers in the Philippines is just a symptom of that."

Journatic's Timpone concedes that the use of fake bylines was a mistake — but he said they were just real estate items with transactional data — like who bought what when — and shouldn't have had bylines at all.

Timpone said the bylines were added as a search optimization technique so the items would pop up in Google News searches. He also said that some of his colleagues have been subject to abuse online — and indeed a quick search appears to yield blogs set up to object to his company's aggregation of readily available information.

Tim McGuire says it may seem appealing, but newspapers that expect to rely heavily on Journatic are unlikely to be accepted by readers in the long term.

"They are engaging in deception, and some would even call it fraud," McGuire says. "They are pretending they are producing local news with people who are not local. I think it's naive to think that local news is only about things that happen locally. I believe local news also has to be locally produced."

Yet all of this plays out against a backdrop of cutbacks in the newspaper industry as paying print subscribers and advertisers peel away. According to one industry group survey, staffing levels have fallen by more than a quarter since the year 2000.

In some cases, newspapers are getting by with fewer than half as many journalists as they once did. The Tribune Co. has accelerated the consolidation of producing the news pages of its various papers throughout the country in Chicago, with the exception of its biggest paper, the Los Angeles Times.

The website PasadenaNow has only two editorial employees, including its editor and publisher, James Macpherson. When he announced that he would outsource the writing and reporting of some articles about the Pasadena City Council to India several years ago, it sparked an outcry. Now, Macpherson tells NPR, he commissions stories from American and British writers living largely in Mexico and the Philippines.

His site produces between 20 and 30 stories a day about Pasadena life. Most of them are not what a daily newspaper would consider hard news. But he says he does some original reporting that he shares with writers abroad — along with feeds of meetings of public officials and links to public documents. And then he edits and fact-checks the stories once they're done. Without that system, he says, the site would not exist.

"It's the only way I can turn a profit," Macpherson says.

And, indeed, some editors and innovators contend that salvation may lie in providing indispensable "hyperlocal content" — not just news but practical information about the communities of their readers. But such hyperlocal coverage is expensive. The experiment of the Patch network of blogs, owned by AOL, has to date failed to catch fire. And other major newspapers that have experimented with hyperlocal listings and coverage, including The Washington Post, have backed away, finding it too pricey.

GateHouse media, which owns more than 350 smaller daily and weekly papers, subscribes to Journatic but is replacing it with its own center for processing such material. Ten new employees, based in Rockford, Ill., will serve 30 of its papers, beginning next month. David Arkin, GateHouse's vice president for content and audience, says the company hopes to free up its reporters from more mundane tasks gathering data to do more challenging local reporting.

"It's a major time suck to do that kind of content," Arkin says of the hyperlocal listings. "As we look at what our content goals are in our organization, we need and want more enterprise storytelling. We want more 'what it means'-type stories and packages."