Accessibility links
Despite Delays, Chair Lifts Coming To Public Pools A new provision in the Americans with Disabilities Act requires pools that are open to the public to add the lifts. They were supposed to be installed by May, but the Justice Department has moved the deadline to January. While some pools continue to fight the order, this could be the last extension. 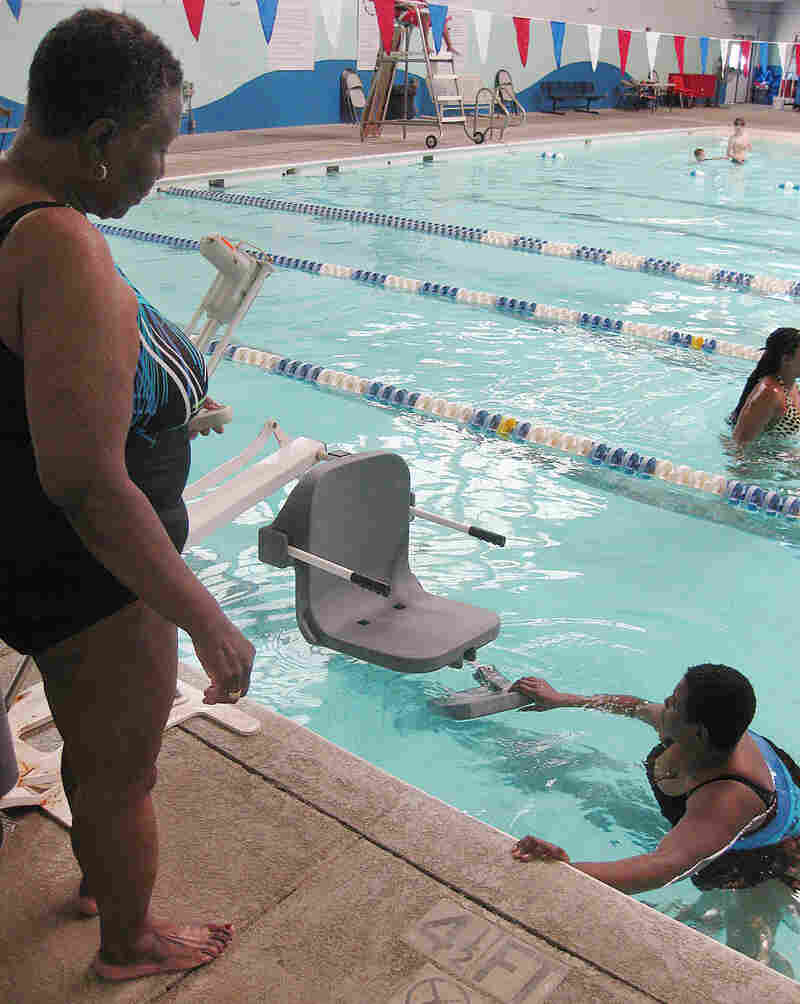 New government regulations require public pools to have chair lifts, like this one in Savannah, Ga., for people with disabilities. The compliance deadline has been extended for a second time. Russ Bynum/AP hide caption

New government regulations require public pools to have chair lifts, like this one in Savannah, Ga., for people with disabilities. The compliance deadline has been extended for a second time.

Pools open to the public were supposed to have chair lifts installed for people with disabilities in time for this summer, but after a wave of protests, the federal order was delayed until January.

Still, some of the country's 300,000 or so pools at hotels, parks and gyms continue to fight the requirement.

Vestavia Hills pool near Birmingham, Ala., is one of thousands of pools that scrambled to get a chair lift installed by May.

At first glance, it looks like a lifeguard chair, only low to the ground. It's meant to help people with disabilities get in and out of the water.

"It goes really, really slow," says Candia Cole, Vestavia's pool supervisor. "It will pretty much submerge all the way down to where they're waist-level on the water, where they can slide out, stand up, grab hold of the side of the pool."

May was the second installation deadline set by the U.S. Justice Department as part of a new provision of the Americans with Disabilities Act. But then many owners of the affected pools complained. Each chair lift costs as much as $8,000. And most hotel pools don't have lifeguards to operate them.

Just in time for summer, some feared they'd have to shut down their pools for noncompliance. So the Justice Department extended the deadline again.

Eve Hill, a disability rights attorney with the agency, says that even though this is the second deadline extension, she thinks it'll be the last.

Paralympic Cyclists Inspire Each Other, And A Documentary

"I also believe that come January, when people actually implement it, they'll go, 'Oh, this is fine,' " Hill says.

But the American Hotel & Lodging Association says it's not fine. Kevin Maher, the group's senior vice president of governmental affairs, says a chair lift can be an accident waiting to happen.

"So you're putting what is essentially an attractive nuisance at the shallow end of the pool, and kids are gonna come, and they're gonna play on that and use it as a diving board," Maher says, "and there's a chance of them getting hurt or damaging the equipment."

Hill says there are tables and chairs around many pools. A chair lift, she says, isn't any more dangerous than that.

Even so, how many people with disabilities will actually use one of these lifts? Melanie Manning, 26, has been in a wheelchair since she was paralyzed in an ATV accident nine years ago. She says at most pools, the water's too cold for her to get in anyway.

Manning swims once a week at the Lakeshore Foundation, a rehab center in Birmingham. Even if the temperature's right, she says, there are a half-dozen other things that need to be in place for her to get in the water, like a mat to be laid out on and someone strong enough to hoist her slippery, 118-pound frame out of the pool lift and back into her wheelchair.

"I mean, if you don't have people in wheelchairs going there regularly, or you don't have all the other accommodations they're gonna need, what's the point in the chair?" she says. "They're still not gonna get in there if they don't have everything that they need."

But Hill, of the Justice Department, says the new rules aren't meant to give access to everyone with a disability.

"They're based for an average sort of person. So it's not designed to meet the needs of the entire range of people with disabilities," Hill says.

Cole, at the Vestavia Hills pool, says that could help people who just have a hard time getting in and out of the pool — but who swim just fine once they're in the water.

The elderly, people with arthritis or someone who is missing a limb could benefit from the chair lift, but Cole says so far no one's asked to use it.