Accessibility links
Yemen Airstrikes Punish Militants, And Civilians In an exclusive report, NPR's Kelly McEvers visits the sites of the escalating U.S. airstrikes in Yemen. The air campaign has helped drive al-Qaida-linked fighters out of towns in southern Yemen. But residents say the civilian casualty toll has been high. 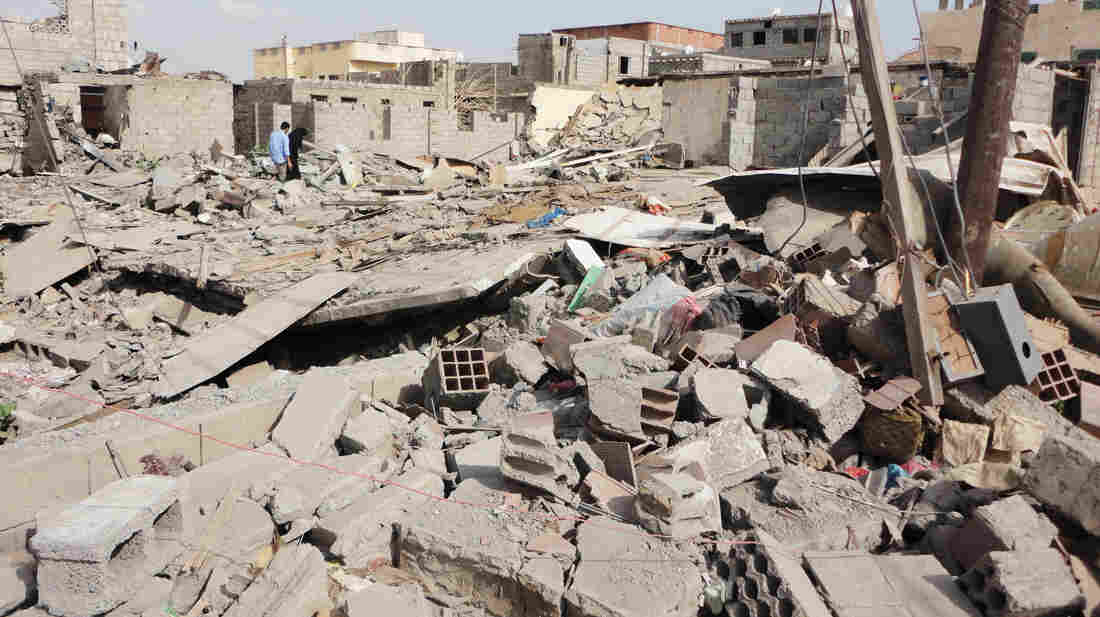 A May 15 airstrike targeting militants devastated this section of Jaar, in southern Yemen. Officials reported that two militants and eight civilians were killed in this particular strike. But residents told NPR that no militants were killed and 17 to 26 civilians died. This area was under the control of al-Qaida in the Arabian Peninsula and an allied group until last month. Courtesy of Ziad Al-Mehwari hide caption

The destruction is total. In Jaar, a town in southern Yemen, an entire block has been reduced to rubble by what residents say was a powerful airstrike on May 15.

For the first time in more than a year, the sites of the escalating U.S. air war in southern Yemen are becoming accessible, as militants linked to al-Qaida in the Arabian Peninsula have withdrawn from the area. This retreat follows the sustained American air campaign and an offensive by the Yemeni government forces on the ground.

And it also means that for the first time, the casualty figures and the reactions of local residents can be checked against the official version of events.

They don't always match up.

At this particular site, witnesses say the strikes rocked the town in the morning, just as many residents of Jaar were out buying breakfast. Residents say they heard a plane, and a house on the main street was flattened. One man inside died instantly. Dozens of people rushed to the scene.

Residents say the plane circled back and came in low.

"We didn't think it would come back," says a witnesses who runs a nearby car repair shop. "Suddenly we see it come back ... and shoot again."

The witnesses claim the plane that did this was American. We ask them how they know it was American, and not part of the Yemeni Air Force. 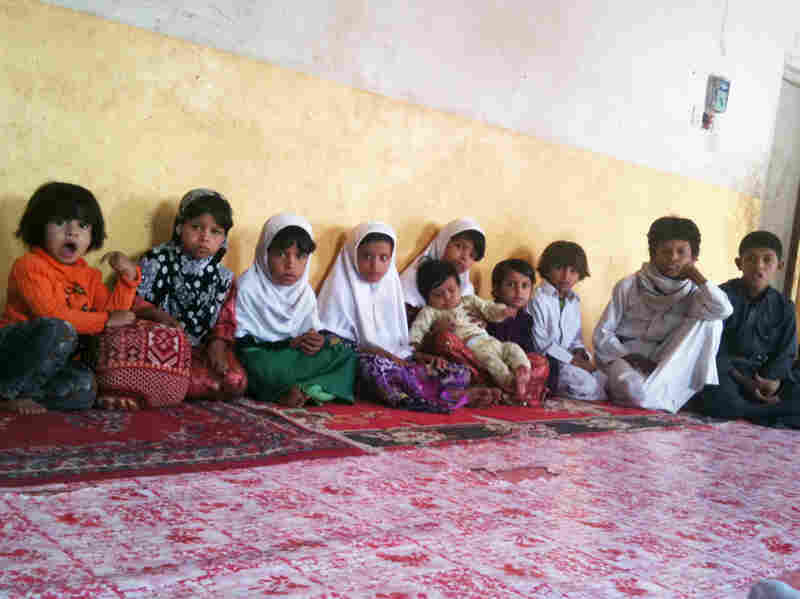 Some of the 26 children of Saleh Qaid Toayman, who was killed with one of his sons in an airstrike on Oct. 14, 2011. The family says the eldest son, Azzedine, has joined an al-Qaida-affiliated group to avenge the father's death. The group's black banner hangs in the family's home. The family says the militant group gives them a monthly stipend. Kelly McEvers/NPR hide caption 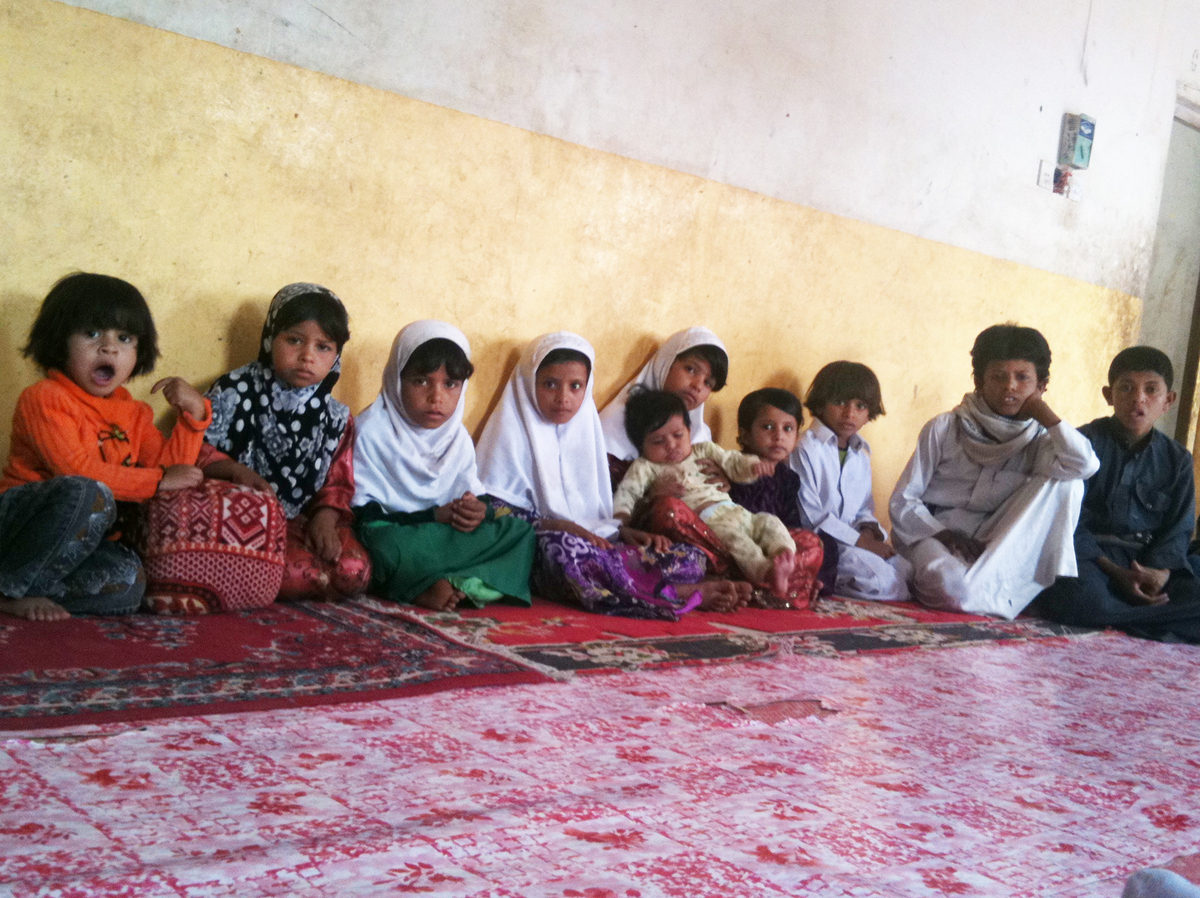 Some of the 26 children of Saleh Qaid Toayman, who was killed with one of his sons in an airstrike on Oct. 14, 2011. The family says the eldest son, Azzedine, has joined an al-Qaida-affiliated group to avenge the father's death. The group's black banner hangs in the family's home. The family says the militant group gives them a monthly stipend.

The plane was gray, says one man. "It looked like an eagle. We don't have planes like that," he says.

In the escalating air war in Yemen, it's extremely difficult to figure out who is responsible for any given strike. There are four possibilities: It could be a manned plane from the Yemeni Air Force or the U.S. military. Or it could be an unmanned drone flown by the U.S. military or the CIA.

All are being used in the fight against al-Qaida and other militant groups in Yemen. But no matter who launches a particular strike, Yemenis are likely to blame it on the Americans. What's more, we found that many more civilians are being killed than officials acknowledge.

Neither the Yemeni government nor the U.S. military will say much about the strikes.

The Yemeni government does acknowledge its role in airstrikes, though it typically provides only limited and piecemeal information. The casualty figures given by the government are often lower than those that residents or journalists find at the scene of attacks, particularly when it comes to civilian casualties.

In the mid-May strike in Jaar, for example, Yemeni officials said two militants and eight civilians were killed. According to residents we spoke with, no militants were killed, but there were 17 to 26 civilian deaths. That was just one of more than 40 documented strikes this year alone.

At a hospital where some victims are treated, entry to the facility is highly restricted. We sit and wait for a boy named Abdullah. He survived the second strike on May 15. A tall, thin, ghost of a boy limps into the room.

Why The U.S. Is Aggressively Targeting Yemen

Al-Qaida Takes To The Hills Of Yemen's Badlands

Huge pink blotches cover Abdullah's legs, arms, face and head. He's been badly burned and is now undergoing painful skin grafts. We tell him Yemeni officials said the first house that was hit that day was a haven for militants. He says the man in the house was just an ordinary citizen.

We ask if the government distributed fliers warning people to stay away from places known to house militants — as Yemeni officials claimed to have done a few days before the strike. Abdullah says he saw no such thing.

We ask Abdullah how the attacks make him feel about the people responsible?

"How would it make you feel?" he says.

In the next room, a man named Ali Al Amoudi lets out a sigh as he tells us how the strike hit his house and three others just a few weeks ago in the town of Shaqra, just down the road from Jaar. His 4-year-old son and 6-year-old daughter were hit. They died in his arms on the way to the hospital.

Four other children and one woman died that day. No militants were killed, according to witnesses. Amoudi says the strike was fate.

Many strikes do hit their targets, including one on a hospital in Jaar that residents say was being used by the militants. As part of the same strike, a house in Jaar was hit, and neighbors say militants were renting it.

That strike came about a month ago on a hot night as Adnan Ahmed Saleh stepped out for some fresh air.

"I got back inside, closed the door, and then the first rocket hit," he says. He calls them rockets, but all he really knows is that there were explosions — and that the house next to his was flattened. Five al-Qaida-linked militants who lived there were killed.

Saleh says the next day, more militants came and took the bodies and most of the rubble away. Then they paid the owner of the house several thousand dollars in compensation.

Saleh says he's mostly glad the militants are gone. He just wishes he could get something for the damage that the strike also caused to his house — not to mention regular electricity.

Yemeni lawyer Haykal Bafana says al-Qaida does much to win the hearts and minds of poor Yemenis.

"The people who the Americans are terming as collateral damage, they are the poorest of the poor in Yemen," he says. "There is, as far as I know, no attempt by the Americans to go in and do a proper battlefield damage assessment."

Bafana says at the very least, Yemeni or American officials could investigate civilian deaths, acknowledge mistakes were made, and perhaps offer compensation. Or, even better, help build hospitals and schools, so local residents aren't encouraged to join the militants. 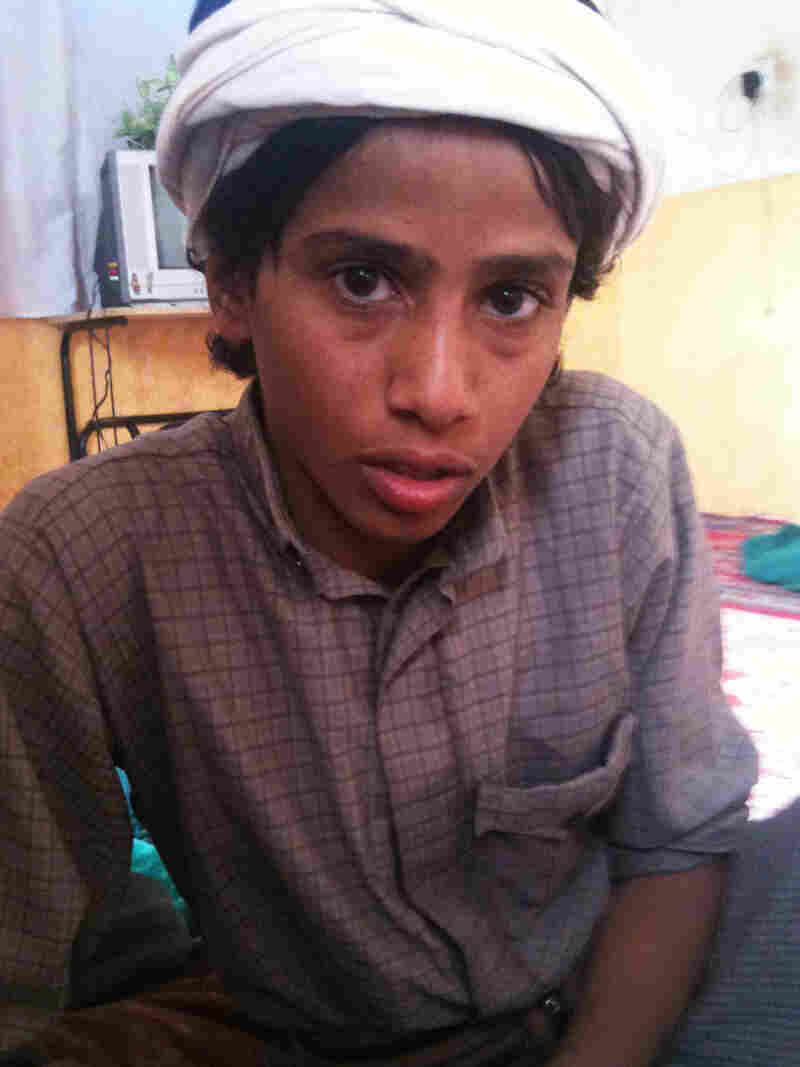 Azzedine Saleh Qaid, 15, witnessed the killing of his father and brother in an airstrike last Oct. 14. Azzedine says he now wants revenge against America for the deaths. Kelly McEvers/NPR hide caption 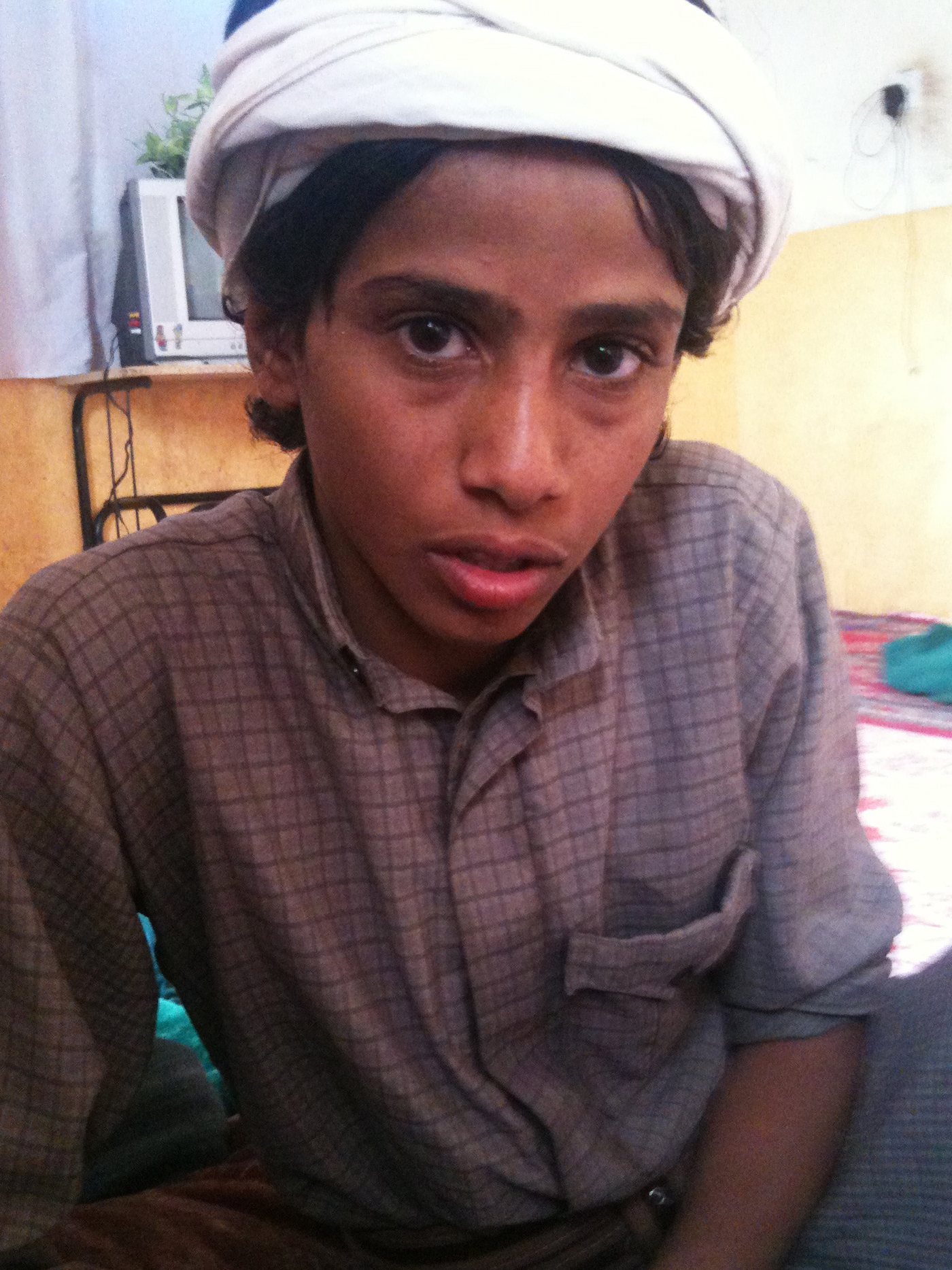 Azzedine Saleh Qaid, 15, witnessed the killing of his father and brother in an airstrike last Oct. 14. Azzedine says he now wants revenge against America for the deaths.

Instead, he says, the air campaign to kill militants sometimes only creates more militants.

Inside the dingy sitting room of a mud-brick house in the poor desert province of Marib, we're greeted by a wall of children whose father, Saleh Qaid Toayman, was killed in a strike on Oct. 14, 2011.

One of the boys, Azzedine, was there when the strike hit. He says he and his father and his brother were grazing camels in an area known to be controlled by al-Qaida. Night fell. The men slept outside a mosque. The first strike hit their car. Azzedine ran one way, his father and brother ran the other way.

Then came a second strike.

"I heard a huge explosion. But I stayed where I was, hidden under a tire. I did not move until the morning. Then, when I woke up, I was scared. I went to see my father and my brother. They were scattered into pieces."

Azzedine says his father fought in Afghanistan in the 1980s with men who would later join al-Qaida. The family says the father recently renounced ties with the group. They say he was even at one time on the payroll of Yemeni intelligence.

"If they wanted to arrest him — or even kill him — they knew where he lived," one relative says. "Why did they have to kill him like this?"

Now Saleh's sons have just one thing on their minds — revenge. Azzedine and the others say they want to fight against those who killed their father, namely against America.

In fact, they say Saleh's eldest son has already joined the al-Qaida-linked group, Ansar al Sharia. Hanging on the wall of the sitting room is the group's signature black banner. The family says the group bought them a new car, to replace the one destroyed by the airstrike. They say the group even pays them a monthly salary.

Another son is sitting to my right. He stares at me, hard. His name is Osama. He pulls out a crumpled piece of paper that he keeps in his pocket. He nudges me, urging me to look.

It's a picture of an American plane.