Accessibility links
As Mine Protections Fail, Black Lung Cases Surge An investigation by NPR and the Center for Public Integrity found federal regulators and the mining industry are failing to protect miners from the excessive toxic coal mine dust that causes black lung. The disease is now being diagnosed in younger miners and evolving more quickly to complicated stages. 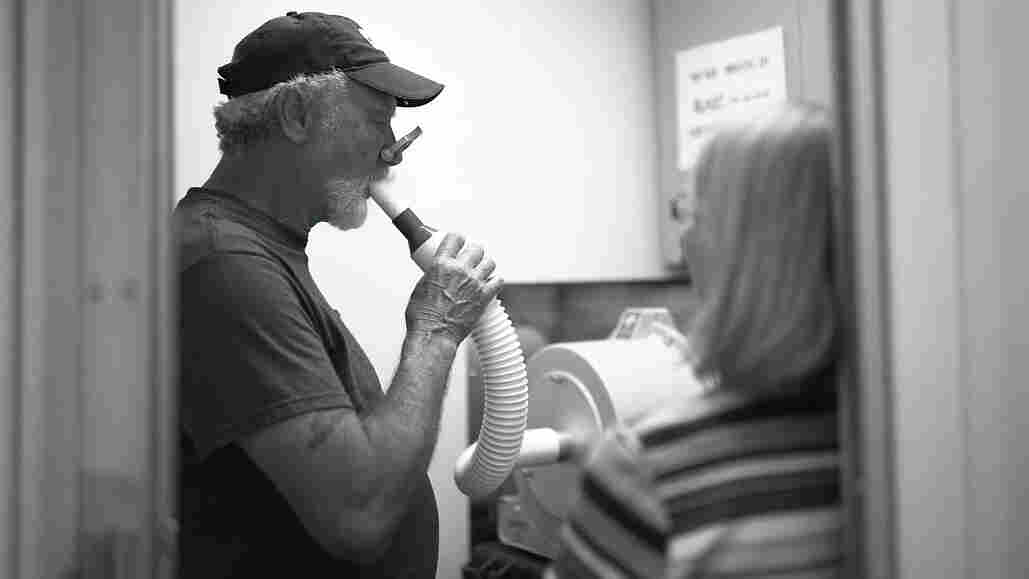 Coal miners are tested for black lung at a clinic in West Virginia. David Deal for NPR hide caption 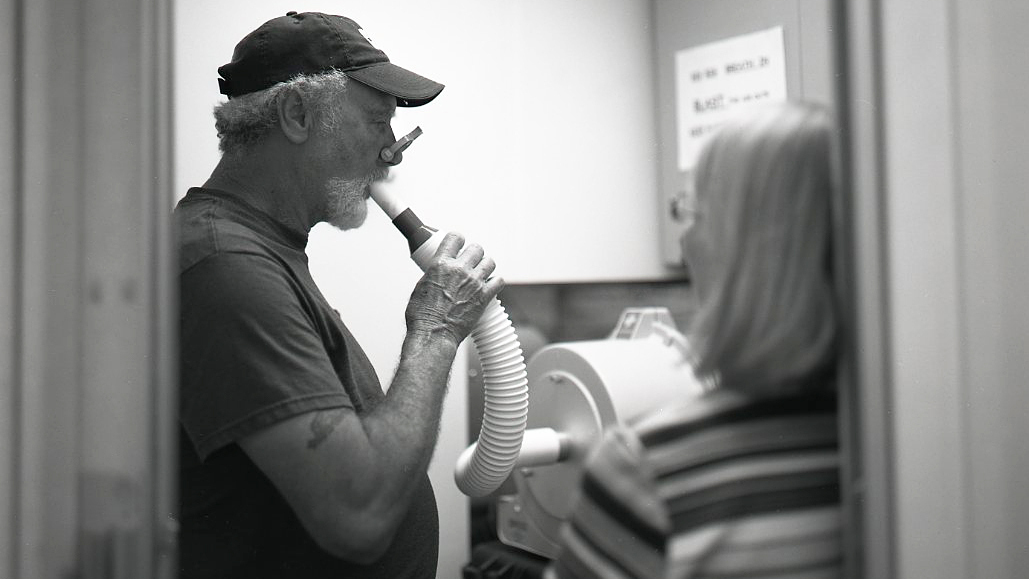 Coal miners are tested for black lung at a clinic in West Virginia.

Part one of a two-part series.

"I'm seeing more definition in the mass," McCowan says, pausing for deep breaths as he holds the X-ray film up to the light of his living room window in Pounding Mill, Va.

"The mass is larger and more defined in the right upper lobe," he continues, clinically describing the solid streak that shows up white on the X-ray of his lungs. "If you know white is bad and black is good, I'm in a lot of trouble."

McCowan went from a clean X-ray at age 35 to progressive massive fibrosis — an advanced stage of coal workers' pneumoconiosis, or black lung — in just five years.

"You go from being normal to where ... one day you try to do something you used to do, and you can't do it and you're just heaving to catch your breath," McCowan says. "And you say this is crazy. It can't be this bad. And then you realize a couple months down the road that it can be. And you realize a year down the road after that that you ain't seen nothing yet."

An 'Epidemic' Among Miners

The Resurgence Of Black Lung By Tenure

A joint investigation by NPR and the Center for Public Integrity (CPI) has found that McCowan is not alone. Incidence of the disease that steals the breath of coal miners doubled in the last decade, according to data analyzed by epidemiologist Scott Laney at the National Institute for Occupational Safety and Health (NIOSH).

Cases of the worst stage of the disease have quadrupled since the 1980s in a triangular region of Appalachia stretching from eastern Kentucky through southern West Virginia and into southwestern Virginia.

Black lung experts and mine safety advocates have warned of the resurgence of the disease since 1995. New reporting by CPI and NPR reveals the extent to which federal regulators and the mining industry failed to protect coal miners in the intervening years.

An analysis of federal data by CPI and NPR also shows that the mining industry and federal regulators have known for more than two decades that coal miners were breathing excessive amounts of the coal mine dust that causes black lung. CPI and NPR also found that the system for controlling coal mine dust is plagued by weak regulations and inaccurate reporting that sometimes includes fraud.

"This is clearly a public health epidemic," Laney says. "This is a rare disease that should not be occurring. It's occurring at a high proportion of individuals who are being exposed."

Especially shocking to Laney and others focused on black lung is the grip the disease has on younger miners and its rapid evolution to progressive massive fibrosis, or complicated black lung.

At the Upper Kanawha clinic in Cedar Grove, W.Va., the black lung caseload doubled in the last 10 years, according to program coordinator Debbie Wills, and began to include younger miners in their 40s and more serious disease. 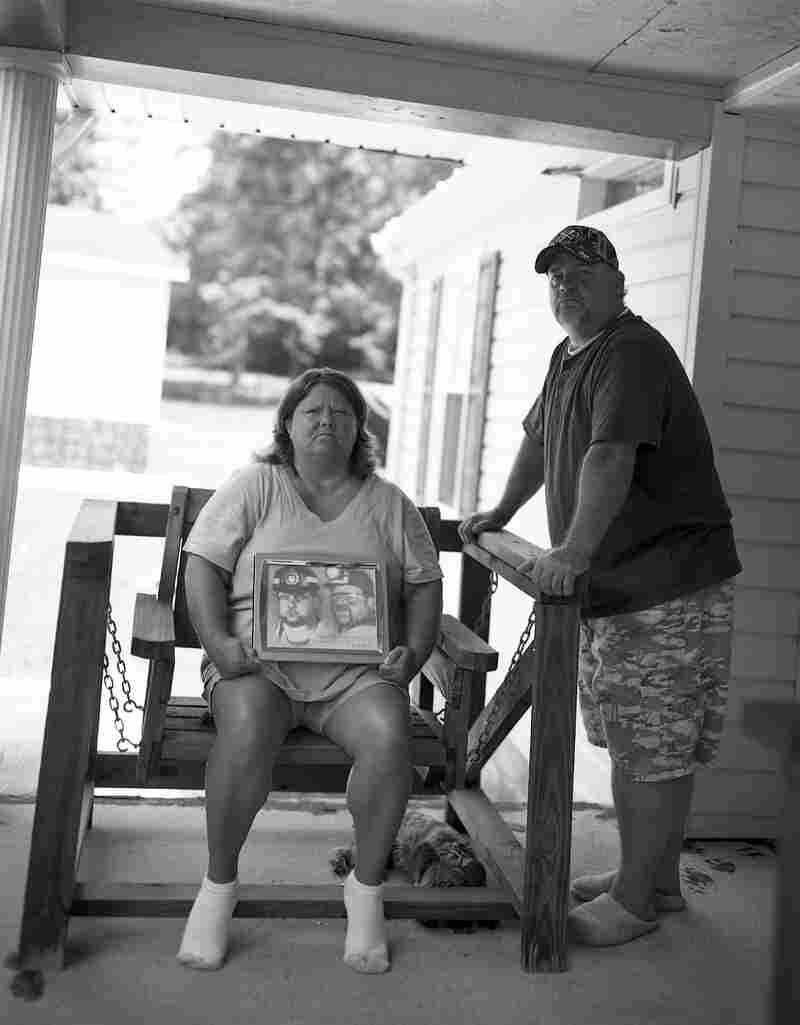 Patty and Gary Quarles lost their son, Gary Wayne Quarles, in the explosion at Upper Big Branch mine. Their son's post-mortem diagnosis indicated he had black lung, a puzzling finding since he was only 33. David Deal for NPR hide caption 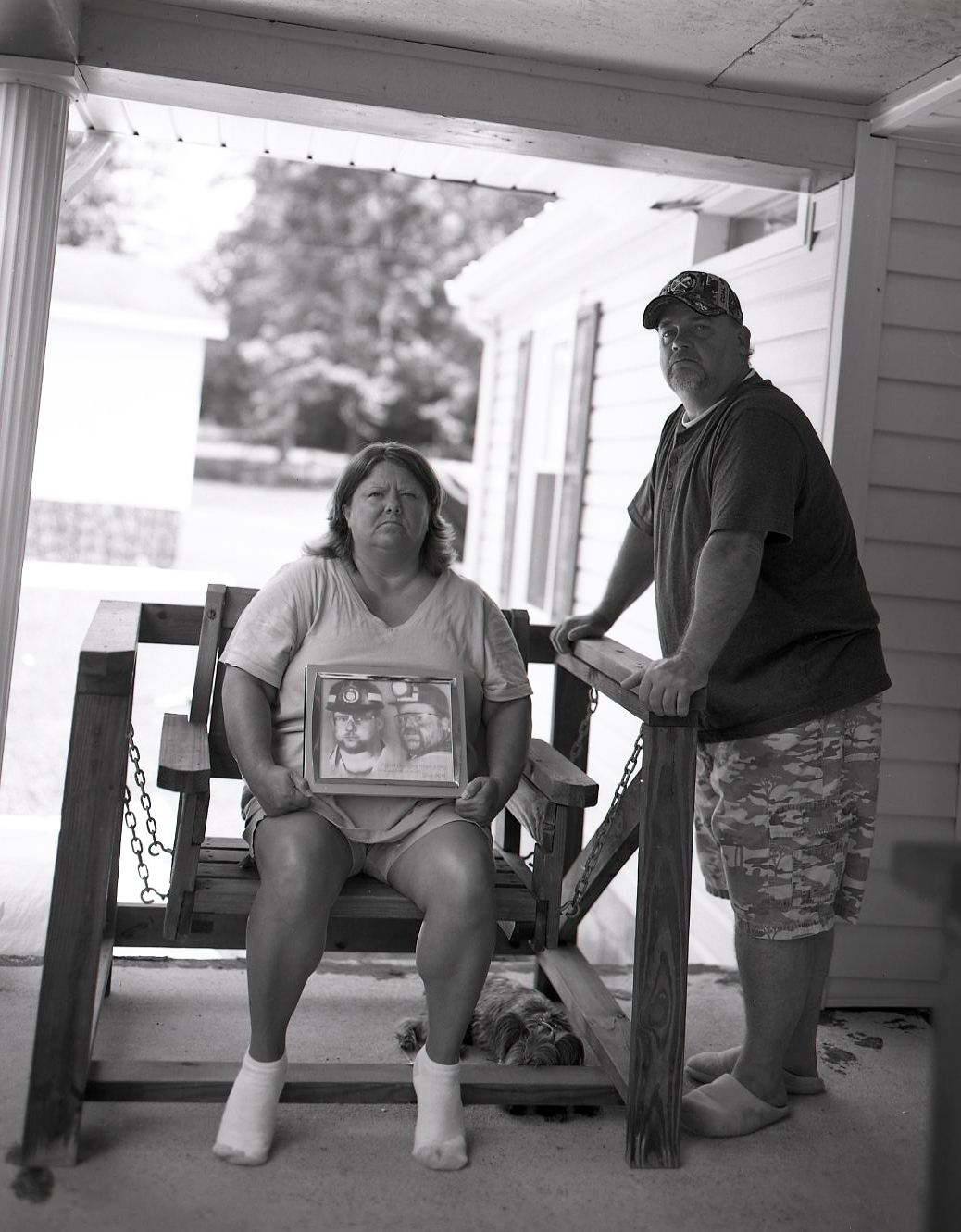 Patty and Gary Quarles lost their son, Gary Wayne Quarles, in the explosion at Upper Big Branch mine. Their son's post-mortem diagnosis indicated he had black lung, a puzzling finding since he was only 33.

The autopsies of the 29 victims of the 2010 explosion at what was then Massey Energy's Upper Big Branch mine also show an escalation of cases. Twenty-four of the victims had sufficient lung tissue for testing, and of those, 71 percent had the nodules and lesions on their lungs that signify the disease.

That's a rate 10 times the average for southern West Virginia, says Davitt McAteer, a former federal mine safety chief who led an independent investigation of the explosion, in Raleigh County, W. Va., and reviewed the autopsies.

"What was shocking was the number of miners who showed evidence of black lung," McAteer says, "particularly among younger miners ... and miners who you would not have expected to have black lung."

That includes some victims who spent fewer than 10 years underground and at least two who were only in their 20s.

"It's unbelievable," says Gary Quarles, whose son Gary Wayne Quarles was 33 when he died at Upper Big Branch. His autopsy showed signs of black lung. "Being in the mines for 13 to 15 years and already considered having black lung ... that's uncalled for."

Quarles, who is 55 and spent twice as many years underground, says his chest X-rays are negative for the disease.

The Federal Coal Mine Health and Safety Act of 1969 was supposed to sharply cut exposure to coal mine dust. The act set a standard for coal dust exposure (2 milligrams per cubic meter of air), which was as little as 1/4 of the concentrations miners breathed at the time.

The act's passage followed a 23-day unauthorized and rowdy strike in which 40,000 West Virginia coal miners demanded government efforts to prevent the disease and to compensate victims.

Images from 1974 document the efforts to reduce black lung among coal miners.

By the end of the year, tough dust exposure limits were in place. Miners were offered free diagnostic chest X-rays every five years, and federal compensation became available.

The X-rays showed 4 in 10 miners tested had black lung. The disease killed 1,800 miners in a single year. But diagnoses soon plunged more than 90 percent, according to NIOSH data.

"They anticipated that no one would develop progressive massive fibrosis," says 84-year-old Donald Rasmussen, a pulmonologist in Beckley, W.Va., who says he's tested 40,000 coal miners in the last 50 years.

"In 1969, I publicly proclaimed that the disease would go away before we learned all about it," he adds. "And I was dead wrong."

"We began to see the appearance of younger miners who had worked in the mines only since the dust suppression following the '69 act that were showing up with complicated pneumoconiosis or progressive massive fibrosis," he says.

Since 1970, NIOSH epidemiologists documented test results for 43 percent of the nation's coal miners. In 1995, the tests began to indicate more and more black long, rapid disease progression and the unexpected occurrence among relatively young miners.

"From the patterns and from the severity, from the prevalence of the disease, this must be a situation in which the dust in many, many mines is simply not adequately controlled," says Edward Petsonk, a pulmonologist at West Virginia University and a consultant for NIOSH. "There's nothing else that could possibly cause this."

The new era of coal dust controls was followed by more dust exposure for miners, according to federal data obtained by CPI and NPR. The average workweek for coal miners grew 11 hours in the last 30 years, adding about 600 hours of exposure each year.

"By the time I was 40 years old, I mined more coal than most miners [had] seen in a lifetime," says McCowan.

Production pressure grew with greater demand for coal and higher prices. By 2000, coal production had jumped fivefold from the 1970s. In 2010, it was still triple what it was when the new coal dust limits took effect.

"You can't be exposed to the kind of tonnage that I was and not get black lung disease," McCowan says.

Actually, Petsonk and Rasmussen say, some miners are more susceptible to black lung than others. They can't explain why, but they do say that smoking enhances susceptibility. Still, neither McCowan nor Gary Wayne Quarles was a smoker.

"In the process, they release more silicon dioxide, and the increase in silica is more toxic than just the coal dust itself," Rasmussen says. 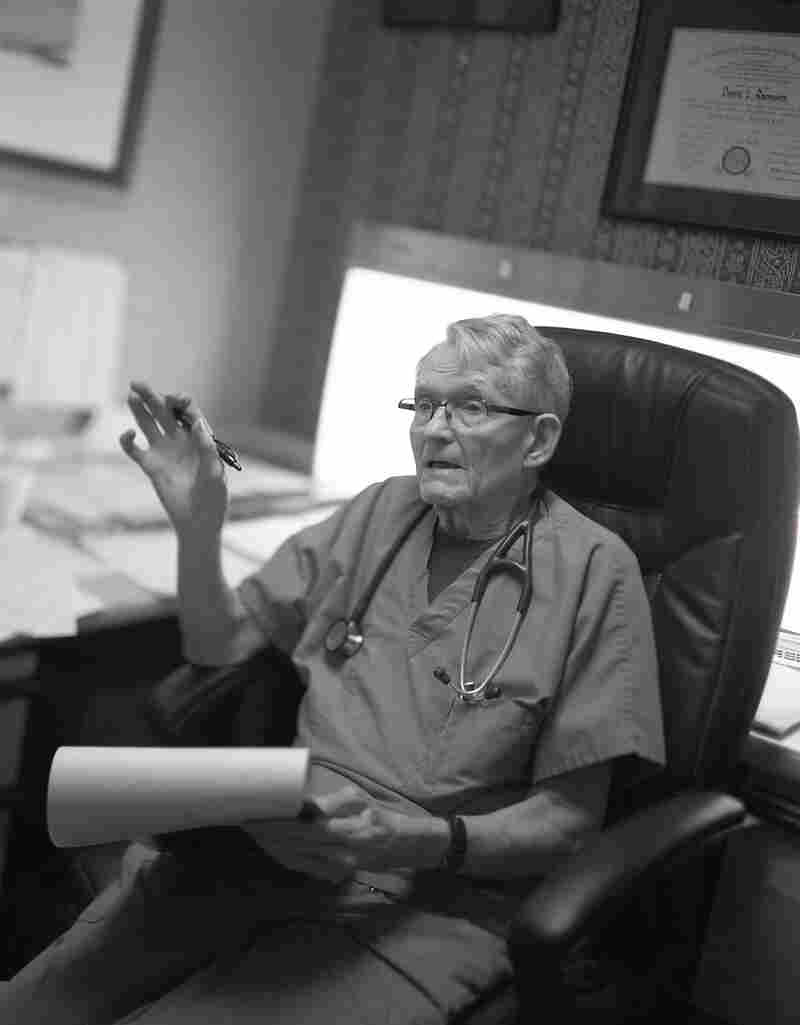 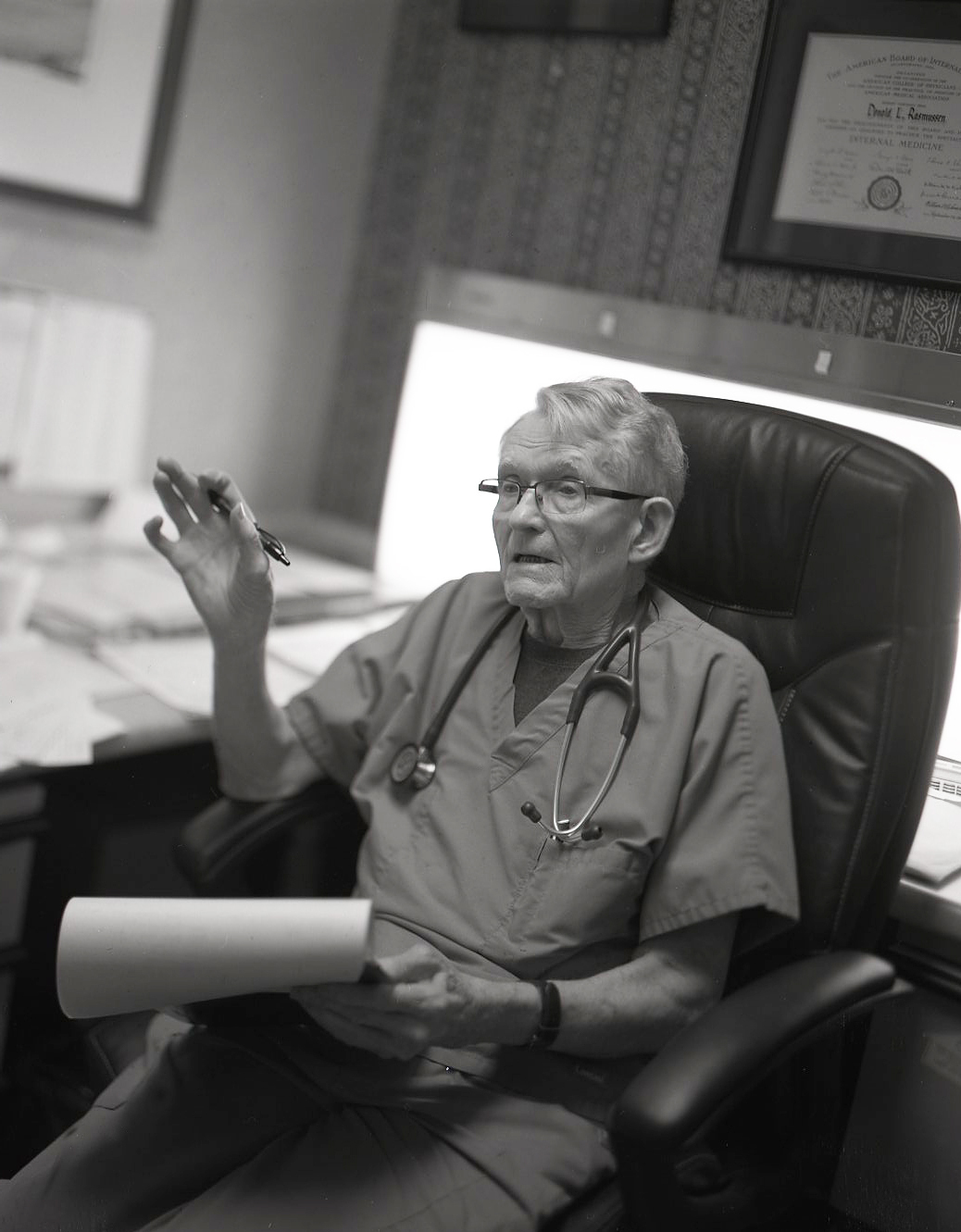 Federal records obtained by CPI and NPR under the Freedom of Information Act show thousands of coal miners were exposed to excessive levels of silica in each of the last 25 years. Since 1987, coal mining companies and government inspectors turned in more than 113,000 valid mine dust samples. Roughly 52 percent of those samples exceeded federal standards. In 1998 alone, about 65 percent of the valid silica samples violated the standard.

Silica exposure prompts a call for something that might seem unexpected from the National Mining Association (NMA): more regulation. The industry group wants a crackdown focused specifically on silica in the Appalachian region where black lung is resurgent.

"These people are being exposed [to] three to four times the silica exposures for periods over 20 years. [They have] a chest full of silica and nothing's been done about it," says Bob Glenn, a black lung consultant for NMA.

Excess silica forces mining companies to meet a lower standard for coal dust. The idea is that less exposure to coal dust means less exposure to silica. The federal Mine Safety and Health Administration (MSHA) proposes toughening the coal dust standard by slashing exposure limits in half (to 1 milligram per cubic meter of air).

Mine Dust Standards Vs. Protection

Coal dust measurements taken by MSHA and the industry show that coal mines already meet the lower standard and have for years. But the industry still opposes the new standard because it would broadly apply to coal dust and to all mines everywhere. 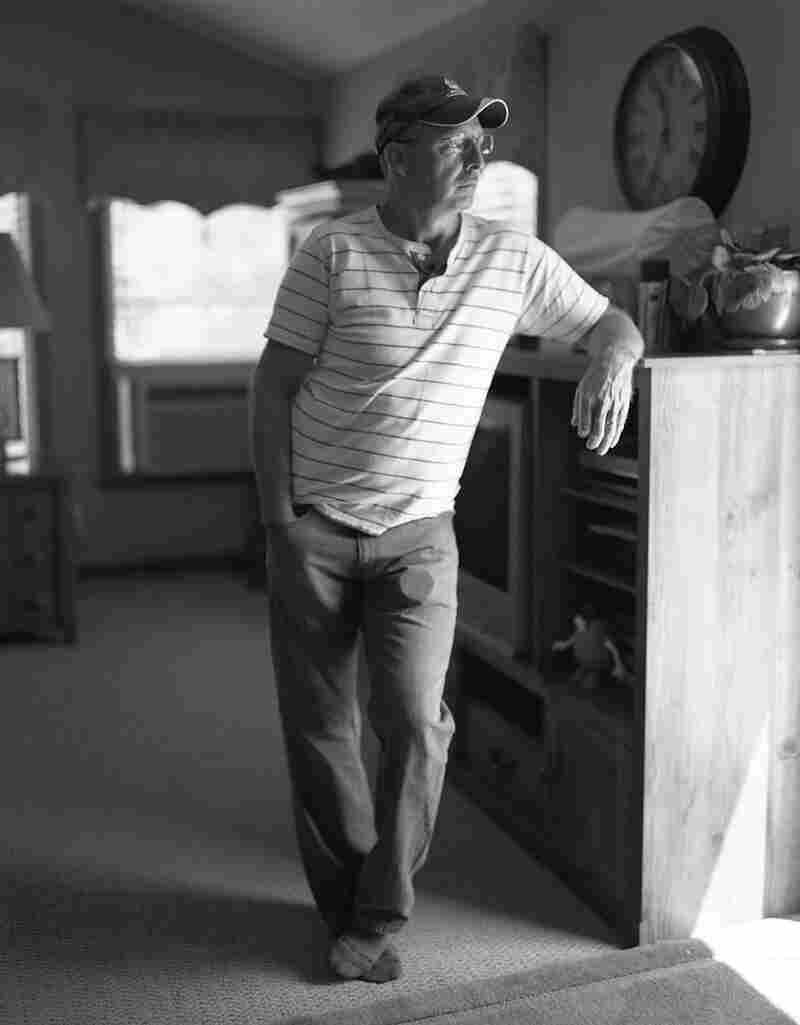 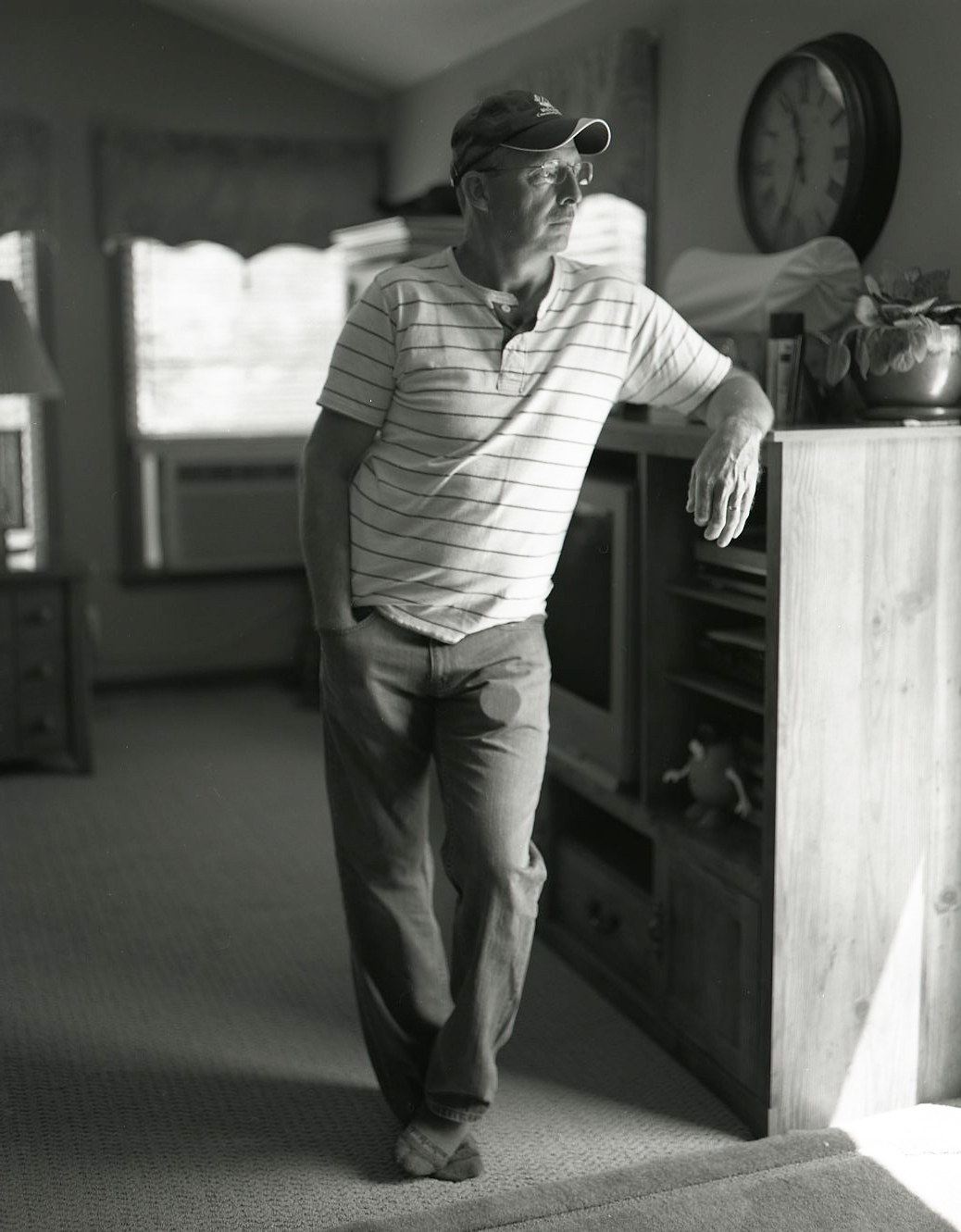 In a companion story to the NPR/CPI investigation, veteran coal industry reporter Ken Ward Jr. of The Charleston Gazette reviews 40 years of attempts to strengthen protection for miners.

Ward quotes former MSHA official Celeste Monforton, a worker safety advocate now at George Washington University: "We can't get a regulation out to save our souls." And, as Ward reports, "miners are left with the same system that experts have agreed hasn't worked for decades."

Since 1970, when mine dust controls began, black lung contributed to the deaths of more than 70,000 miners. The federal government and the industry spent $45 billion compensating the victims, including McCowan, and their families.

"Now it feels like I've got a heavy wet sack on each lung," McCowan says, between long, deep breaths. "Breathing has become a conscious effort. ... It seems like I give up a little bit of my world each day, that it gets smaller and smaller."

Simple tasks become enormous challenges — "a Mount Everest every day," he calls it — including holding his 2-year-old grandson.