Accessibility links
Across Continents, Syrian Family Seeks Assad's Ouster The Nachar family had a reputation for opposing the Assads' rule even before last year's uprising. They're even more active now. Family members have protested outside the United Nations, raised money to supply the rebels and helped establish an opposition political movement. 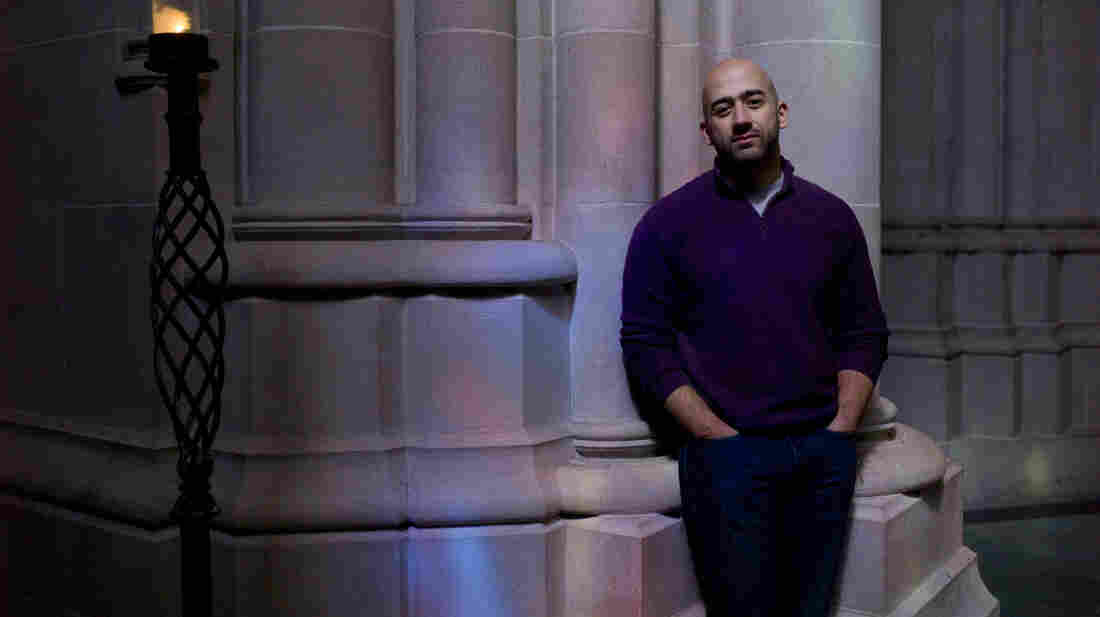 Syrian activist Karam Nachar is pursuing a doctorate in Middle Eastern history at Princeton. His family is working on several fronts against the Syrian regime. His father, who has been jailed previously, helped form the Syrian National Council, an organization of dissidents. Ozier Muhammad/The New York Times hide caption 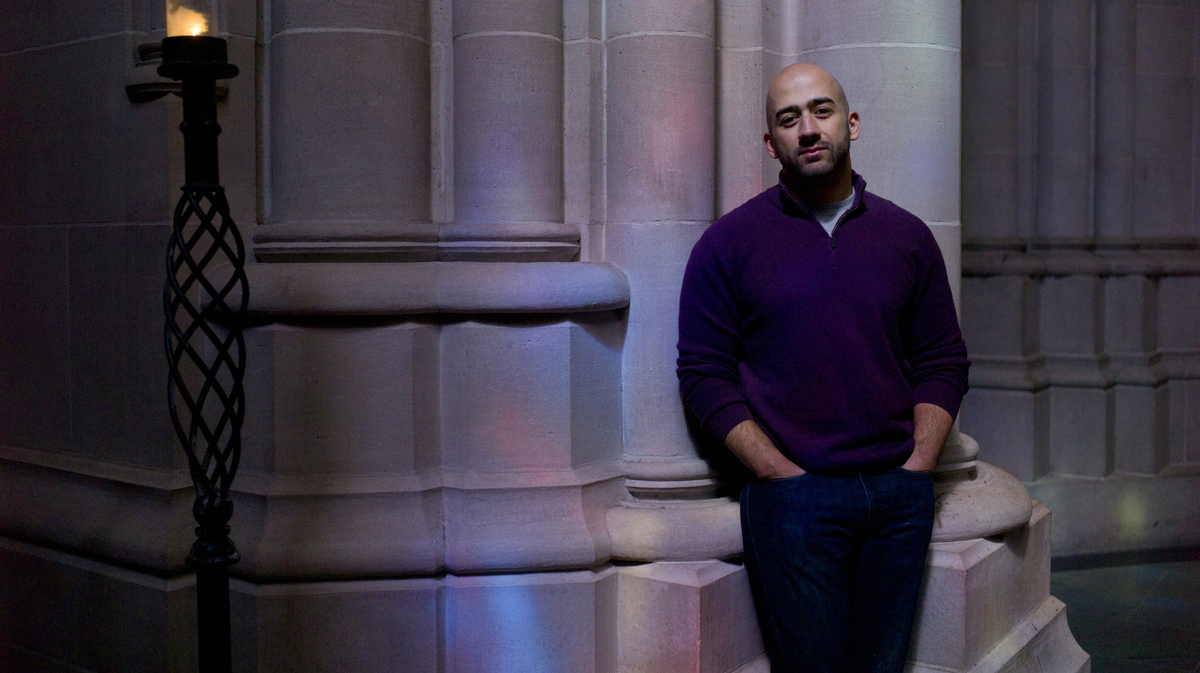 Syrian activist Karam Nachar is pursuing a doctorate in Middle Eastern history at Princeton. His family is working on several fronts against the Syrian regime. His father, who has been jailed previously, helped form the Syrian National Council, an organization of dissidents.

The Nachar family has long been on the radar of the Syrian government, and since last year, they have become even more visible.

When Syrians first started openly protesting inside the country in the spring of 2011, 29-year-old Syrian Karam Nachar was working on his doctorate in Middle East history at Princeton University. He joined demonstrations outside U.N. headquarters in New York.

"Sometimes we come here just to vent. A lot of the time we are chanting in Arabic –- not even in English. You want to feel a sense of camaraderie and community," he said at one of the weekly demonstrations.

I am fearful for the country. Things are pretty bad, and they are heading to a place where things are completely out of control.

Samir Nachar, a 67-year-old Syrian dissident who has fled to Turkey

This activism, even thousands of miles removed from the Middle East, was new for Syrians. Even in the U.S., many feared Syria's security police would target them here or relatives back home. This community has been transformed over the 16-month uprising in Syria. Karam Nachar was an early activist, his role much larger than protesting on the street.

"A lot of people worried that their parents would be arrested on their behalf," he says. "This wasn't a concern for me because my father was already arrested several times."

Samir Nachar, a well-know dissident from Aleppo, Syria, was arrested in 2003, jailed for three years, and banned from leaving the country.

By early spring of 2011, Karam Nachar was "full throttle" supporting the revolt.

He raised money to buy medical supplies and communication gear smuggled into Syria. He was up before dawn to connect with activists inside Syria. He became a voice for the opposition in the U.S., calling for international intervention to bring down the regime.

He couldn't tell his father about how active he's become because it was too dangerous to talk on the phone, with the family line monitored by the government.

Then in May 2011, he finally arranged a secure call to Aleppo and discovered that his 67-year-old father was taking even bigger risks, which included demonstrating in the suburbs of Damascus.

"And that's when my dad told me: 'I was in Douma, there were 20,000 people there. It was an unbelievable feeling.' " Karam Nachar says. His father, he says, "sounded like a little kid."

Late last year, his father took another risk and became a founding member of the Syrian National Council, the first organization of dissidents from inside and outside the country. Western and Arab governments hoped the SNC would emerge as a potential government in exile.

But Samir Nachar's public role endangered his family in Aleppo, and Karam Nachar had to make a more anguished call in October to his mother and sister.

He had to persuade them that it was too dangerous to stay because the regime was likely to come after them.

"Don't think you're safe just because you are women," he told his mother. Nachar sent some trusted friends to help his mother and sister quickly pack and cross the Turkish border.

"There's not a single day that passes by without me feeling very guilt. I feel extremely guilty for being here," he said in May in an interview in a New York cafe.

Guilt is not uncommon in a revolt that's claimed so many lives. It's made more intense for Nachar by the memory of another young Syrian, Bassel Shehadeh, who left his studies in the U.S. to join the revolt. He was killed in Syria on May 28.

"Bassel was someone who came from the exact same background that I come from," Nachar says. "It hit me so hard because he's someone who had to actually sacrifice the exact same things that I have right now. And he was so brave. And I definitely have survivor guilt. I feel that ultimately the people who survive this revolution are not the best people because the best people have already died."

Not long after Shehadeh's death, Nachar finished his studies at Princeton and flew to Turkey.

In June, in a cramped apartment in Istanbul, the Nachar family was reunited. A flatscreen TV is tuned to a live stream broadcast of a demonstration in Aleppo, the low hum of the chants is the background to a family discussion.

In this politicized family, everything is open for debate.

Over sweet tea and cookies, Samir Nachar listens as his daughter Zaina and Karam talk about the growing strength of the armed opposition in Syria. His wife, Nouran, bitterly complains that the SNC, the organization her husband helped to created, has failed to unite.

Zaina's critique is tougher. She's listened in on conference calls, SNC meetings that begin as talks and end in fights.

"We get to hear their meetings. But after a while, we were like, 'Come on — this is what we left for? These small mediocre maneuvers and playing games?' "

Armed Opposition Has The Leading Role

It is a widely held view that Syria's political opposition is still too fractured to take over should the Assad regime collapse.

Samir Nachar acknowledges to his family and a visitor that the armed rebels, loosely organized as the Free Syrian Army, have the momentum now.

But he blames the international community, saying it has failed Syria. There was no protection from this ruthless regime, he insists. Desperate Syrians then started fighting back, taking arms from any source, including radical Islamists.

"I am fearful for the country," he says. "Things are pretty bad, and they are heading to a place where things are completely out of control."

Karam shares the worries of his father.

They both agree that the longer the armed rebellion drags on, the stronger the Islamists will become.

"It makes us terrified, I mean, it's worrisome, absolutely, " Karam Nacher says. "At the same time, the only way to deal with this is to engage even more and try to limit the damage as much as possible."

The damage to Syria is the familiy's biggest concern and reflects a wider conversation in the Syrian opposition.

Is there still hope for a political solution? They all agree that the Assad regime must go. But if violence is the only answer, what is the price?