Accessibility links
Proposed Changes To Military Service Roils Israel The Israeli government may extend mandatory conscription to include the previously exempt ultra-Orthodox Jews and Arab citizens of Israel. But Arab Israelis, who say they are treated as second-class citizens, are furious about the proposed change, which many say is a loyalty test. 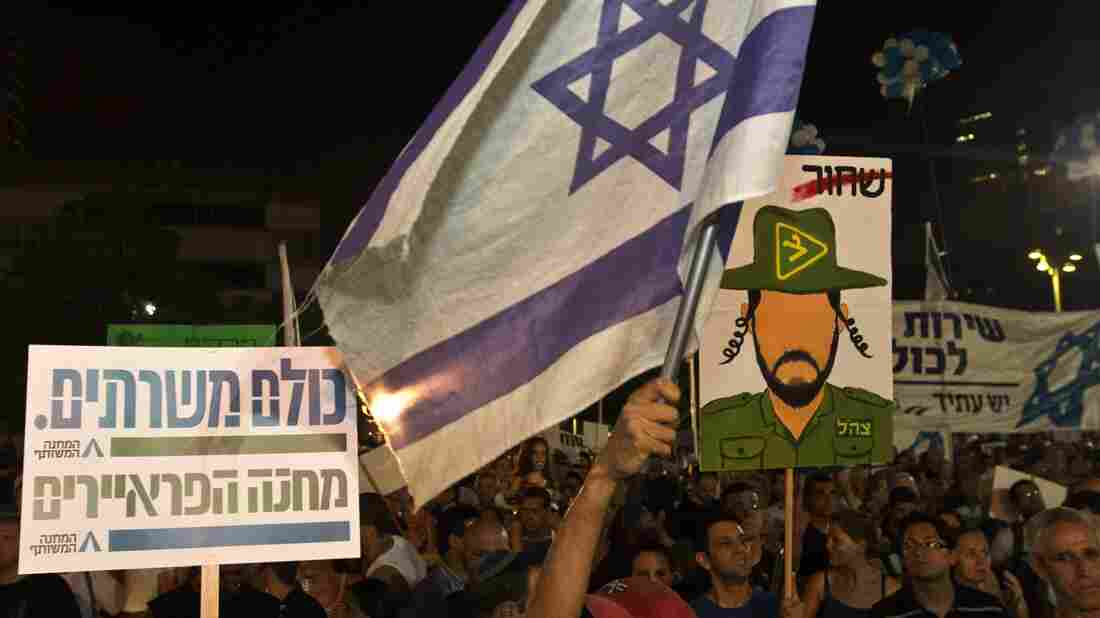 Israeli reservists soldiers and Israeli parents whose children were killed during army service attend a rally in support of a new law to mandate universal military conscription — including ultra-religious Jews who had been previously exempt and Arab Israelis, July 7, in Tel Aviv, Israel. Jack Guez/AFP/Getty Images hide caption 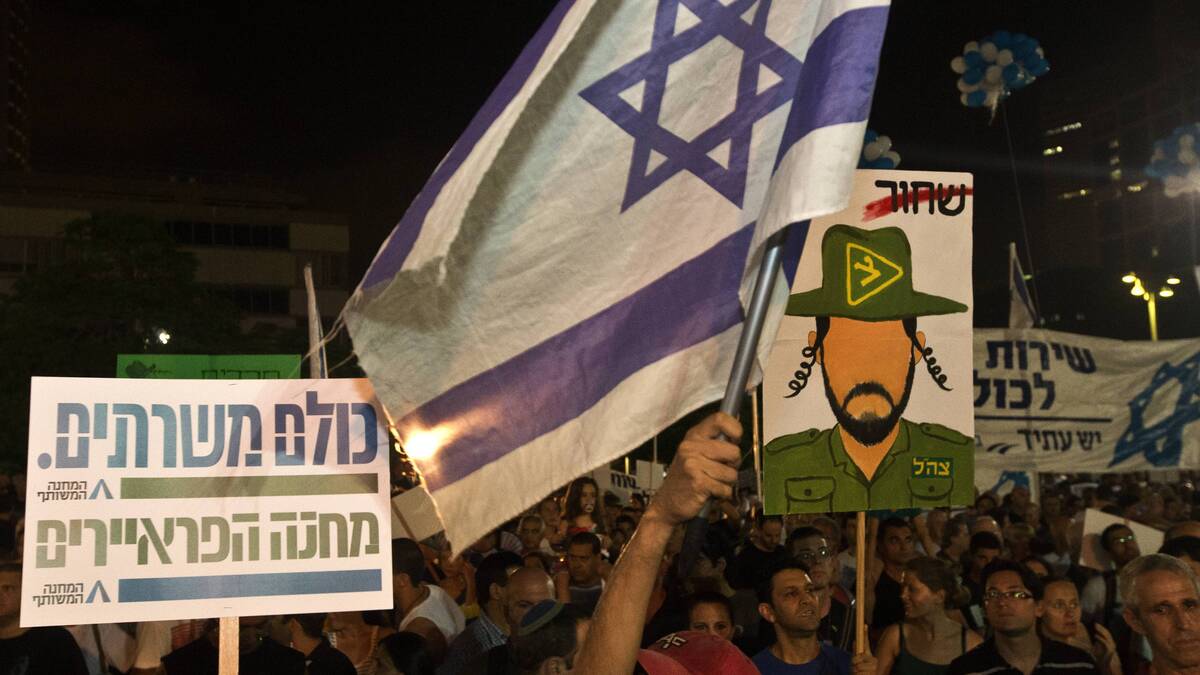 Israeli reservists soldiers and Israeli parents whose children were killed during army service attend a rally in support of a new law to mandate universal military conscription — including ultra-religious Jews who had been previously exempt and Arab Israelis, July 7, in Tel Aviv, Israel.

The Israeli government is weighing a new law that would impose mandatory military service on religious Jews who are currently exempt, as well as compulsory national service for Israel's Arab citizens.

An estimated 20,000 Israelis took to the streets of Tel Aviv over the weekend in support of the proposed changes.

Sara Turkenitch had four children serve in the Israel Defense Forces. She says the ultra-Orthodox receive many subsidies but give nothing back to the state, and she thinks they should.

"They are not working, they are not serving the country. But they want our money. So it makes me furious," she says.

'Why Should We Do National Service?'

The outrage is also strong in places such as the city of Umm el-Fahm, home to about 60,000 of Israel's estimated 1.5 million Arab Israeli citizens.

Even though it's technically part of a booming Israel, it seems to exist in a parallel universe. Umm el-Fahm is overcrowded, the streets are filled with potholes, and, says resident Iyad Ighbariyeh, it doesn't even have a single hospital.

His wife gave birth three days ago and he had to take her to the nearby Jewish town.

We are the second largest city of Palestinians in Israel, he says, and we don't even have the basic infrastructure.

"Rights to the citizens must be absolute rights. They cannot be conditioned on whether you serve in the army or not. ... This is a tool to justify the discrimination towards me.

Haneen Zoabi, a Palestinian member of the Israeli Knesset

Palestinians with Israeli citizenship have long complained that they have been discriminated against and ignored. Unlike ultra-religious Jews who have been given subsidies and aren't required to work, Israeli Arabs say they have largely been left to their own devices.

Community leaders agree. While there seem to be no plans right now to oblige Arab Israelis to join the IDF, Jewish Israeli leaders want them to do some kind of community service in their own towns and cities.

But where would they serve? asks Haneen Zoabi, a Palestinian member of the Israeli Knesset.

But that's not the main problem, she says: "It's more a loyalty discourse."

Zoabi says this is another way of forcing the Palestinian population of Israel to relinquish their heritage.

"Rights to the citizens must be absolute rights. They cannot be conditioned on whether you serve in the army or not, or you serve in the civic service or not," Zoabi says. "This is a tool to justify the discrimination towards me."

Another complaint is that there has been no consultation with Arab Israeli leaders in drafting the new law.

David Rotem is with Yisreal Beitenu, the party headed by ultranationalist Avigdor Lieberman. It's in the ruling coalition government and is leading the charge to make Arab-Israeli participation in national service mandatory.

He agrees Arab Israelis are discriminated against but says there's a reason.

"They are discriminated against because they don't want to give anything to the state, they just want to receive," he says.

But back in Umm el-Fahm, Arab Israelis say they don't get much from the state at all.

Nonetheless, 18-year-old Mohammed Mazen says he would like to do national service. He sees the difference between Jews and Arabs in Israel and says maybe if he serves he can finally be treated as an equal.