Accessibility links
Cycle Of Poverty Hard To Break In Poorest U.S. City Tens of millions of Americans are still struggling, despite the slow economic recovery. In Reading, Pa., the nation's poorest city, local nonprofit Opportunity House provides a lifeline for families trying to stay afloat by offering day care, housing and other assistance. But many in Reading are still left behind.

In the middle of the night, most children are home in bed. But at the Second Street Learning Center in Reading, Pa., a half-dozen tiny bodies are curled up on green plastic floor mats, fast asleep.

A Closer Look At Reading, Pa.

With 41.3 percent of its residents living below the poverty line, Reading, Pa., is the poorest U.S. city with a population of 65,000 or more.

Conversations are hushed. The lights are dim. At 1:30 a.m., day care worker Virginia Allen gently shakes two little sisters, snuggled under the same blanket, to tell them that their mother is there to pick them up.

"Let's go. Mommy's here," she says, telling these children what they already know: It's time to get up, so they can go home for a little more sleep before they have to get up again and get ready for school.

It's another day — or in this case night — at a center where parents can bring their children at any hour of the day or night. And they do, coming and going from round-the-clock work shifts, school or another job search.

Many low-income families in Reading rely on this center, which is something of a safe haven in a troubled city. With a poverty rate of 41.3 percent, Reading has been labeled the nation's poorest city with a population of 65,000 or more. As the economy slowly recovers, many here are being left behind.

Doing It For The Kids

The lives of those who use the Second Street Learning Center, run by the nonprofit Opportunity House, say a lot about what it means to be struggling and poor in America. It isn't starving in the streets as much as it is the countless frustrations that can add up to one step forward, and two steps back.

"Sleep? What is sleep?" she says with a laugh. The mother of four says she's so tired, she sometimes feels like she's 50 years old. She's only 25. "My oldest daughter's 9, then 8, then 5, and my son is 2," she says. Her husband, the children's father, says there's another child on the way.

Gonzales is trying desperately to get ahead, and things are looking up. A few years ago, she was in a homeless shelter attached to the learning center. But she recently graduated from nursing school and just landed a full-time job at a nursing home.

Still, juggling four kids, school, and full-time work is "really tough," she says. "[My] motivation is probably the kids and setting a good example for them so they can never say ... 'My Mom didn't do it, so why should I do it?' "

You hear that again and again in Reading: I'm doing it for the kids. Many low-income parents seem to know instinctively what studies show, that poor children are more likely to become poor adults, to drop out of school and to become single teen parents.

It's tough breaking that cycle — and complicated, when lives are a messy combination of bad luck and bad choices.

Lori Lebo, 37, has had a string of setbacks. Her 20-month-old daughter, Mikaela, was born prematurely. She lost her job in February. And Mikaela's father has been in and out of jail, most recently for breaking Lebo's nose, and then for violating parole.

One of the conditions of parole was that he stay away from Lebo. But, she says, he loves the baby, and the baby loves him. So she let him back home. That was a mistake.

"Obviously life is happening around us, and I can't always focus on one thing," she says. "I feel like I'm doing a juggling act."

Lebo says she was let go from her job at the power company after five years because she missed too much work. But, she says, what was she to do? Mikaela weighed 1 pound, 5 1/2 ounces at birth. There were long hospital stays and doctor visits, not to mention court appearances after her boyfriend broke her nose.

"I mean the job market's tough right now. And a lot of employers are now cracking down, that you can't even take the time to take care of your family," she says. "They basically give you a choice. You want your job, or you want your family?"

Initially, Mikaela and her 9-year-old brother, Jeffrey, continued to go to the Second Street Learning Center while Lebo looked for work. But then, after several weeks, Lebo lost her child care subsidy from the state, and she had to remove her kids from day care.

She wasn't having much luck to begin with. But now her job search is more difficult, because she has to hire a baby sitter if she gets called in for an interview, and funds are limited. If she does find a job, she'll have to wait up to a year to get the subsidy renewed because of state budget cuts.

A System Of Dependency?

Modesto Fiume, who heads Opportunity House, says these things make him "crazy." He says it's difficult enough for low-income families to get on their feet without having the rug pulled out from under them at the wrong time.

"It's almost like we've set up a system where we want people to stay dependent," he adds.

More On Poverty In The U.S.

Fiume says for many of his low-income clients, getting a job isn't enough. Some clients come from very dysfunctional homes and need support. He says the learning center can provide stability in the lives of children who might not get it elsewhere, and that maybe it can help break the cycle of poverty with that next generation.

Kids at the learning center do get a lot more than just snacks and play. There's plenty of organized activity, computer training and homework help. The message is: Work hard and opportunity will follow.

But some things are easier said than done. It's clean and bright inside the center. But outside, the neighborhood is filled with empty lots and tired row houses. Jobs and companies have been fleeing Reading for years.

Tracy Boggs knows that all too well. She lives across the street from the learning center in a three-bedroom town house with her daughters, 7-year-old Emily and 21-year-old Tracine. 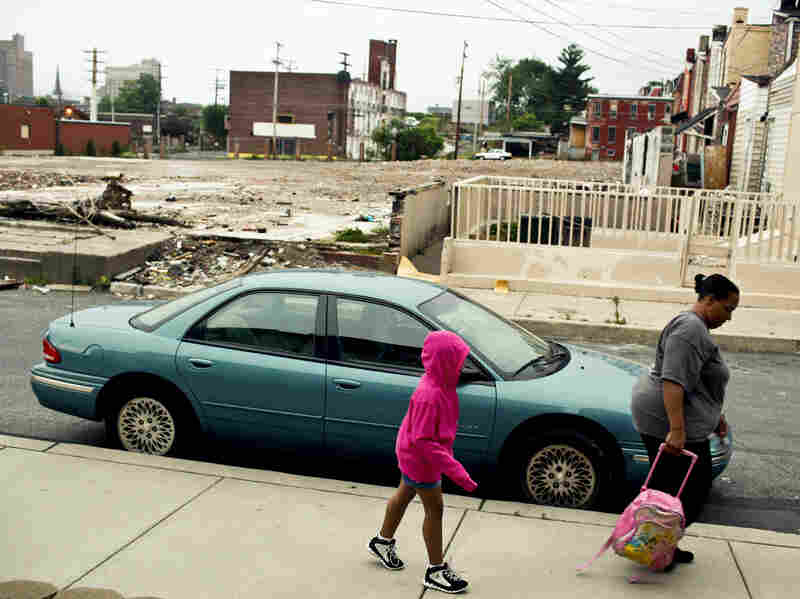 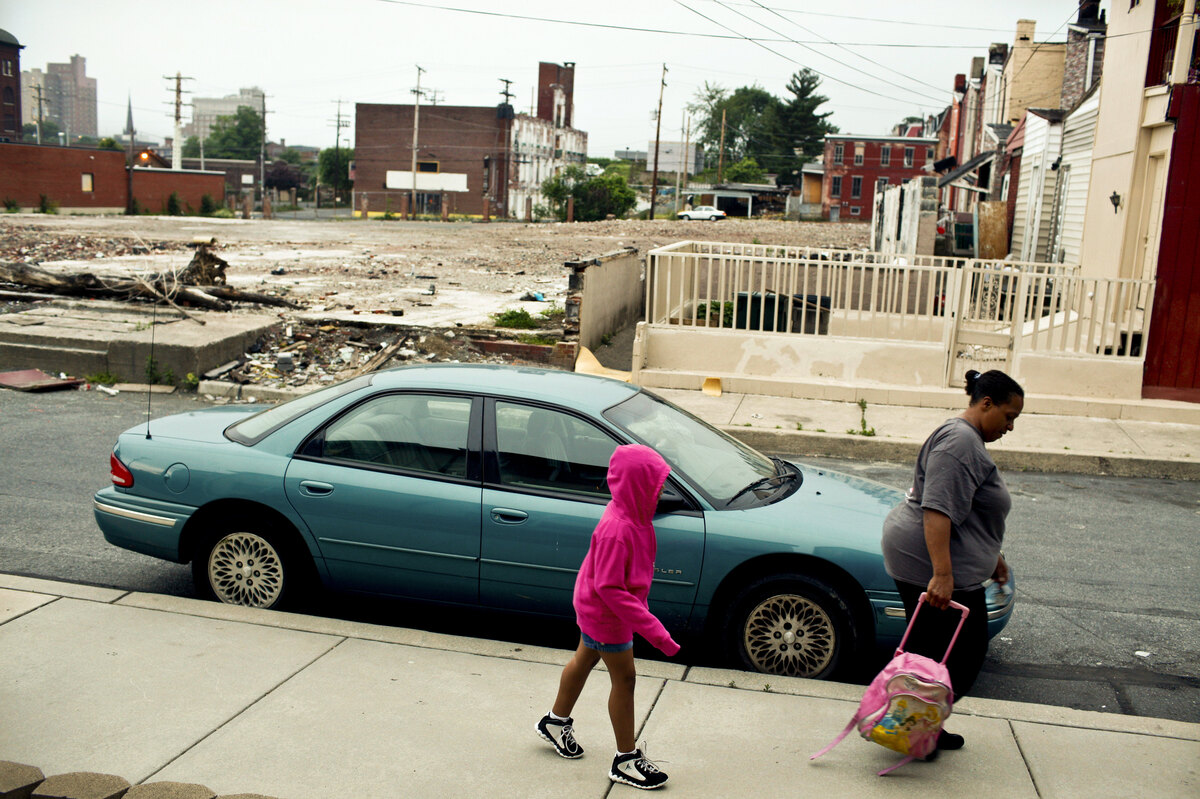 Boggs is 49, soft-spoken, tired. She's been working in recent months at a part-time job, cleaning a beauty supply store at the mall to make ends meet.

"My unemployment [benefits] stopped, and [I] didn't know where I was going to turn," she says.

Boggs worked for eight years at a company in Reading that made needlecraft kits. But then it was sold and the jobs were moved to China. At first, things looked promising. The state paid to retrain Boggs in medical billing and coding. There's a big hospital in Reading, so it seemed to make sense.

But when she got her certificate in December and started to look for work, she realized there were no job openings in Reading. "All the offices here outsource their billing and coding to other sources, other companies," she says. All the jobs were far outside the city. The only way to get there is to drive.

But as with many low-income families, transportation for Boggs is an issue. She owns an old car with 81,000 miles on it and a growing list of problems. And she worries about taking it on the highway. Still, she thinks she has little choice and goes for interviews when she can get them. But so far, she's had no luck landing a job.

If it was just me, I would have [given] up a long time ago.

Hope Despite The Bad Times

Like many mothers in Reading, Boggs has no husband to share the bills. Poverty is high, but it's a lot higher for single mothers. An astounding 66 percent of them in Reading live below the poverty line, less than $19,000 for a family of three.

Boggs admits that she made some bad decisions in life and that her daughters' two fathers turned out to be unreliable.

But, she quickly adds, "I wouldn't change anything in the world for my kids, my daughters. They're what keeps me going and keeps me fighting to keep searching, as bad as the economy is. If it was just me, I would have [given] up a long time ago."

You hear that a lot around the learning center: hope that things will get better if you just keep plugging away, despite the bad times.

One Step Forward, Two Steps Back

It's about 8 p.m., and Meghan Gonzales is down the street from the learning center, at home with her four kids and husband. He's on disability with a bad back. She's had a long day with orientation at her new job. 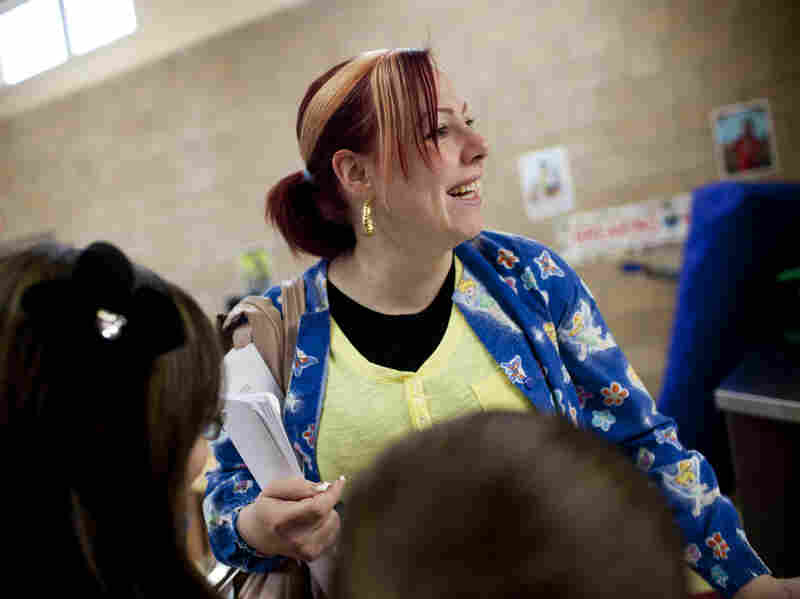 Meghan Gonzales, 25, a mother of four, lived in a homeless shelter in Reading, Pa., a few years ago. She recently graduated from nursing school and now works full time in a nursing home. Kainaz Amaria/NPR hide caption 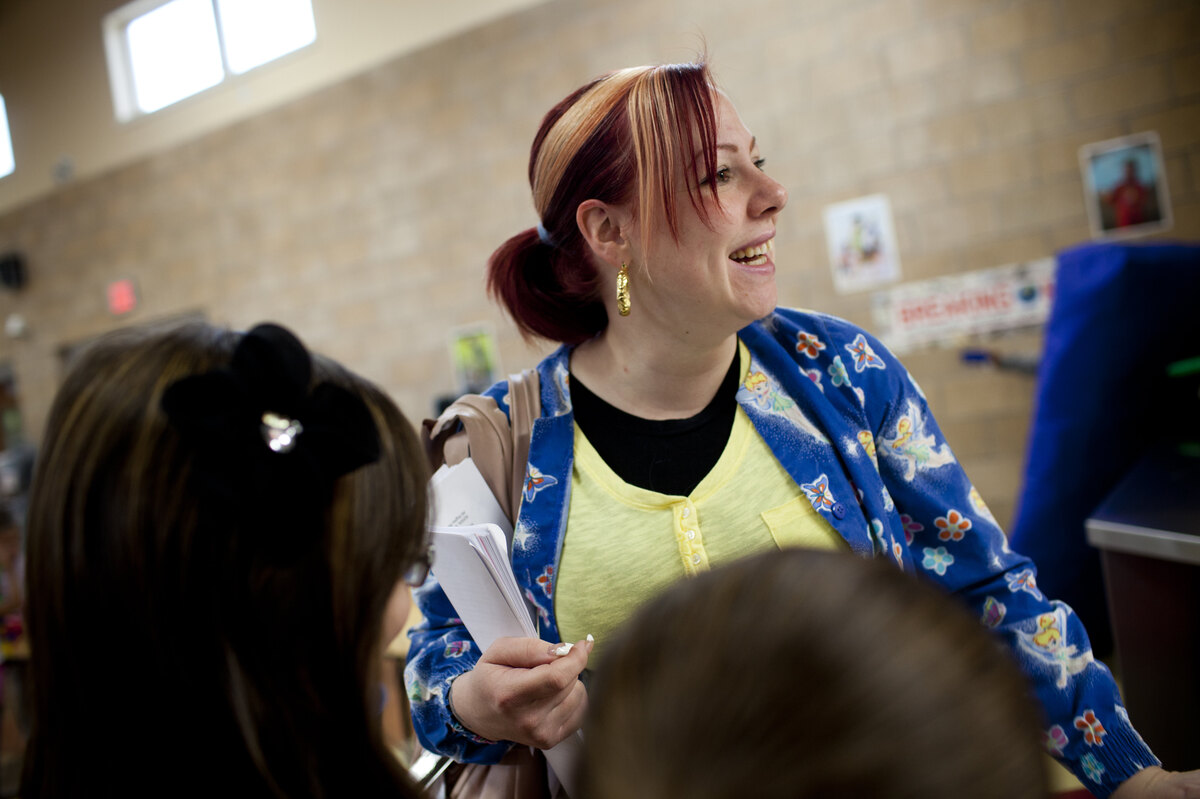 Meghan Gonzales, 25, a mother of four, lived in a homeless shelter in Reading, Pa., a few years ago. She recently graduated from nursing school and now works full time in a nursing home.

Half-eaten plates of spaghetti are scattered across the kitchen table. Their row house is cheerful, but chaotic and tiny. "It's small, but we actually want to move out of the city," she says.

Gonzales would like her children to go to better schools. She's especially worried about the high school in Reading, where almost 1 out of every 2 students drops out.

Gonzales dropped out of that same school a decade ago, when she got pregnant. She says she wants better for her kids.

But, again, it's often one step forward, two steps back. Earlier in the week, Gonzales and her family went to the bank to open their first savings account, so they could start putting money aside. But then the family van, with everyone inside, broke down in front of the bank. Another bill to be paid.