Accessibility links
Black-Lung Rule Loopholes Leave Miners Vulnerable An investigation by NPR and the Center for Public Integrity has revealed widespread and persistent gaming of the system that's designed to measure and control the coal mine dust that causes the deadly disease. 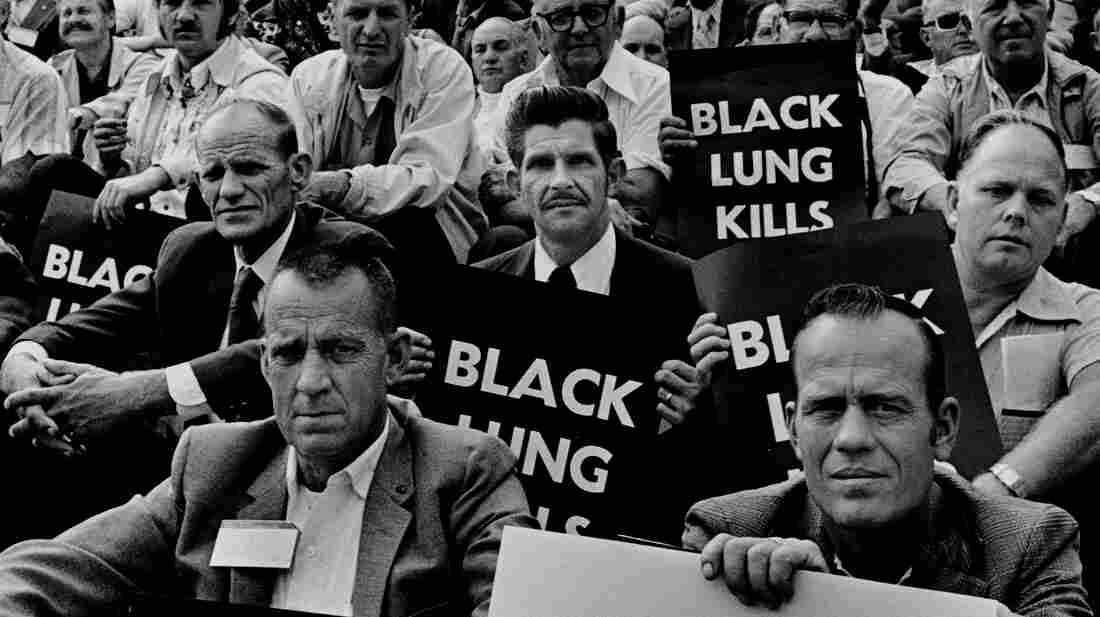 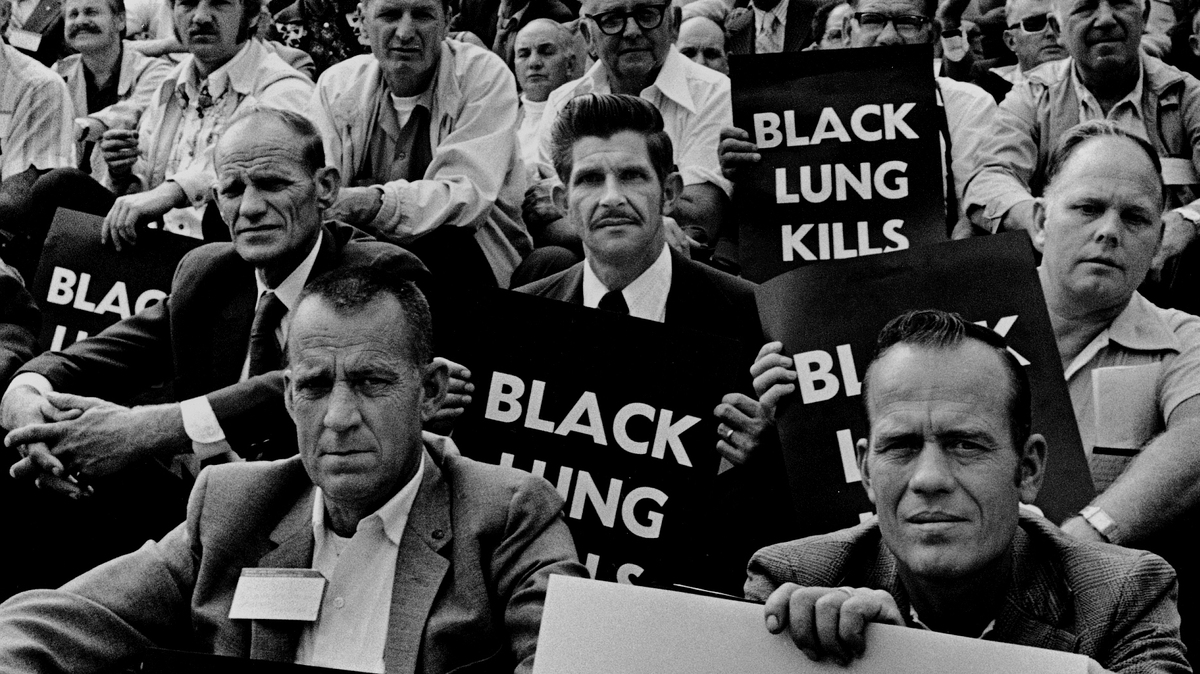 Part two of a two-part series.

Thousands of coal miners continued to suffer and die from black lung during the 40 years that tough new limits on exposure to coal dust were supposed to provide protection.

Control of the mine dust was plagued by weak enforcement by regulators and loopholes exploited by mining companies, according to a joint investigation by NPR and the Center for Public Integrity (CPI). The protections were "set up for failure," says Dennis O'Dell, the safety and health administrator at the United Mine Workers of America (UMWA).

As NPR and CPI reported Monday, a 1969 law slashed the legal limit for exposure to coal dust to as little as 1/4 of the amount many coal miners were breathing at the time. Although diagnoses soon plunged 90 percent, the decline didn't last.

In the mid-1990s, medical experts began noticing an increase in diagnoses, along with disease in younger miners and rapid progression to severe stages of sickness.

The trend is most acute in a triangular region of Appalachia that includes eastern Kentucky, southern West Virginia and southwestern Virginia.

"Since [federal regulators] started protecting us ... 70,000 of us have died," says Mark McCowan, a 47-year-old former coal miner from Pounding Mill, Va., who worked 21 years underground.

McCowan suffers from progressive massive fibrosis, the worst stage of the disease. "I don't feel very protected," he says.

'An Addiction To Cheat'

"So many miners will say, 'If you think the dust is controlled you're crazy,' " he says.

Measuring coal mine dust is key to preventing overexposure. Excess dust can trigger citations, fines and even slowdowns in coal production. Mining companies enforce their own compliance by taking and reporting mine dust samples. Federal mine inspectors also test for excessive dust. 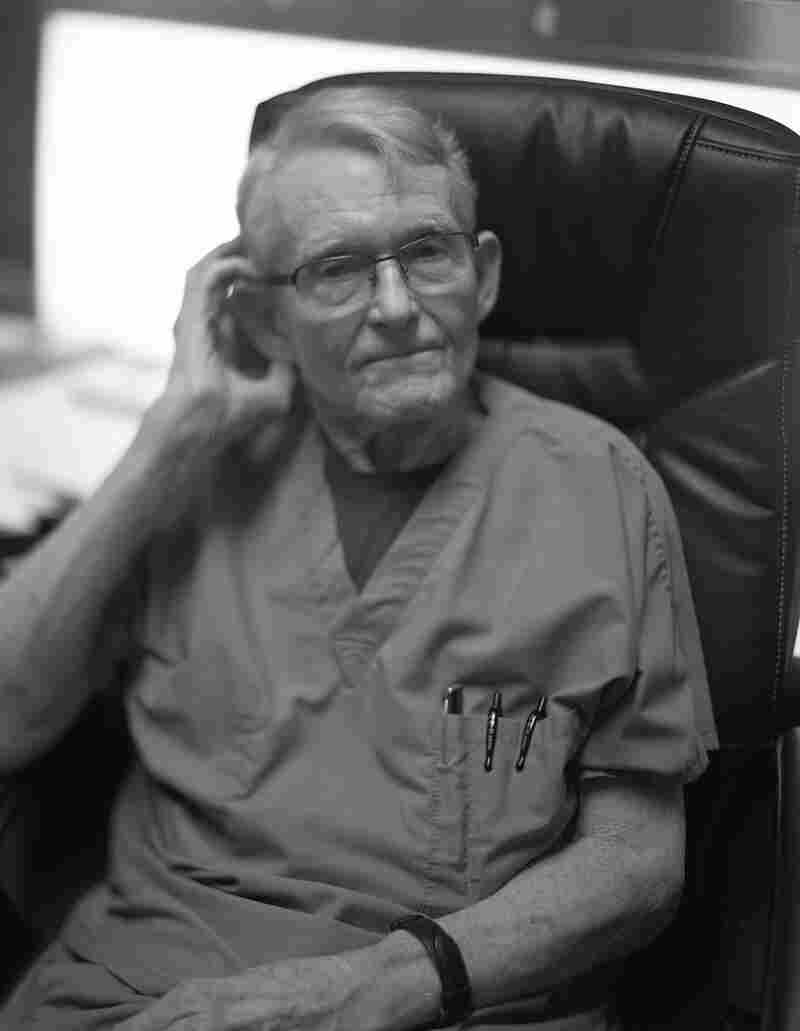 Donald Rasmussen, 84, a pulmonologist in Beckley, W.Va., says he has tested 40,000 coal miners in the last 50 years. David Deal for NPR hide caption 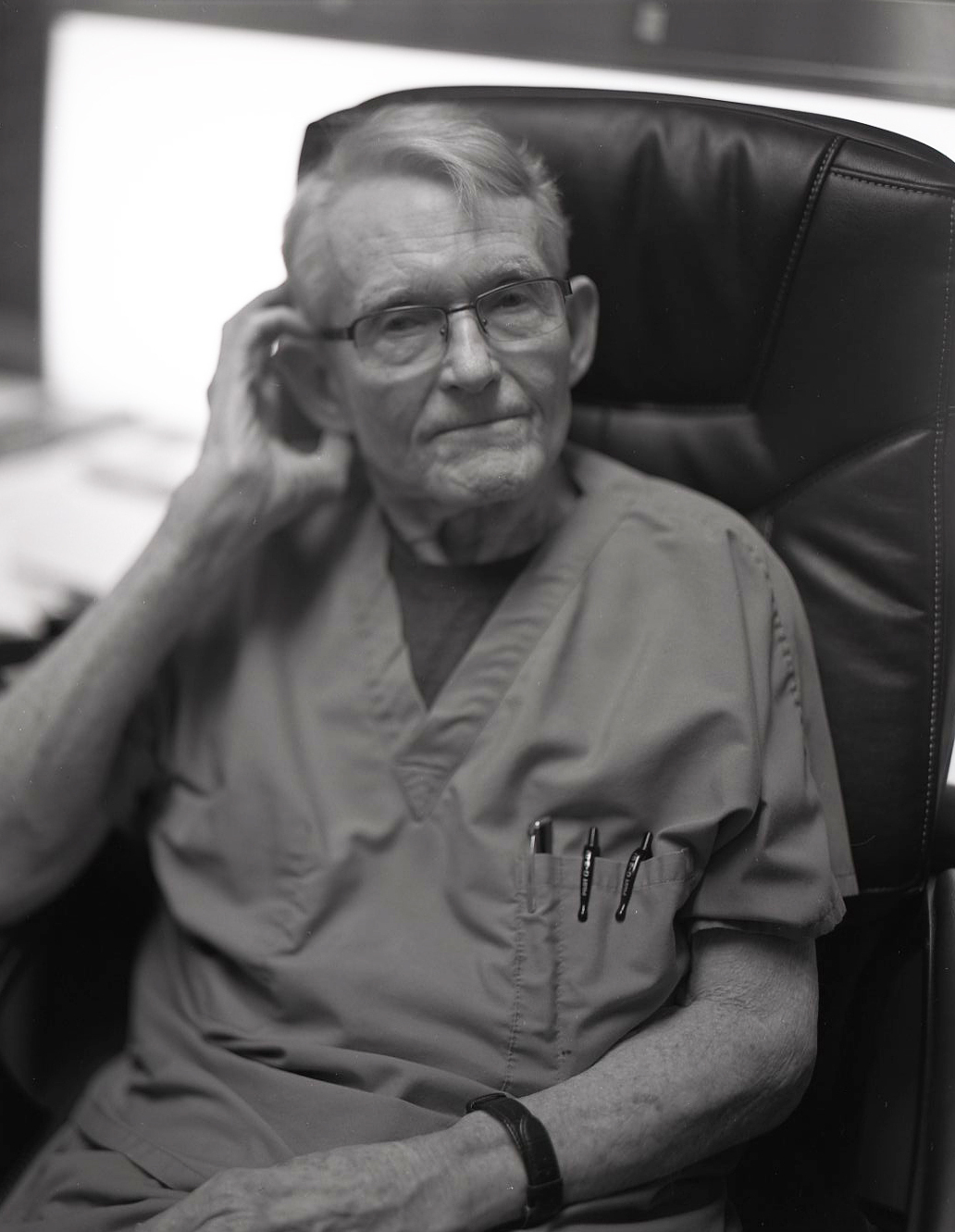 But NPR and CPI have found widespread and persistent gaming of the system designed to measure and control exposure.

Richard Allen, a federal mine inspector underground when the 1969 law first took effect, says he remembers a strange question from a Mine Safety and Health Administration (MSHA) investigator about a carpet's color in a coal mine manager's office.

"It was blue and [MSHA was finding] little blue fibers in each [mine dust] sample," Allen says. "[Investigators] cross-referenced the fibers in these samples to that carpet and found that he was sampling in his office" and not deep inside the mine.

The mine manager was later convicted of defrauding the mine safety agency and served time in prison.

Federal records obtained by CPI and NPR describe 103 cases resulting in criminal convictions for fraudulent dust sampling from 1980 through 2002. Fines totaled $2.2 million, and some mining company officials went to jail.

In 1991, the Labor Department levied civil fines of more than $6.5 million against about 500 coal mines for tampering with mine dust samples.

There was "an addiction to cheat," said Lynn Martin, who was secretary of labor at the time.

David Neil, who worked underground in West Virginia through most of the 1980s, said he was told by a company foreman to hang a measuring device called a dust pump out in mine shafts with clean air and away from coal dust. 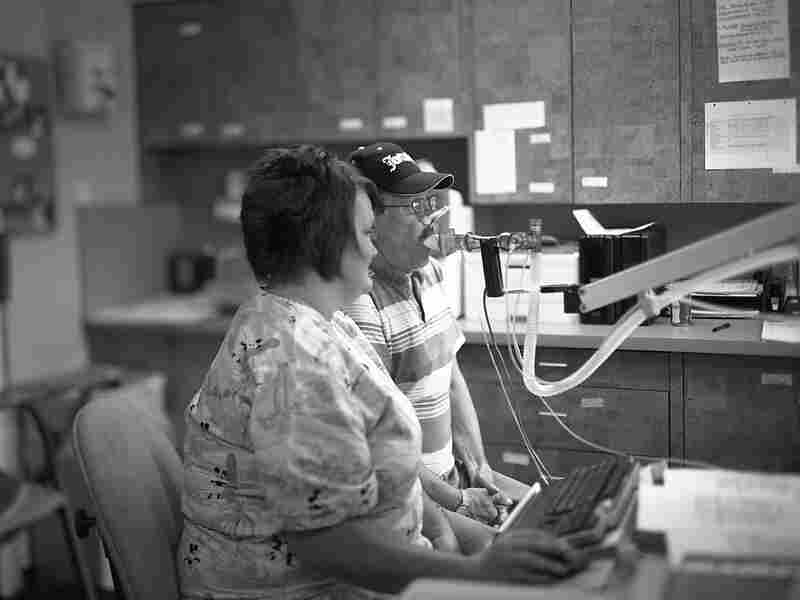 Coal miners are tested for black lung. Recently, the deadly disease has been discovered in younger miners and at more advanced stages. David Deal for NPR hide caption 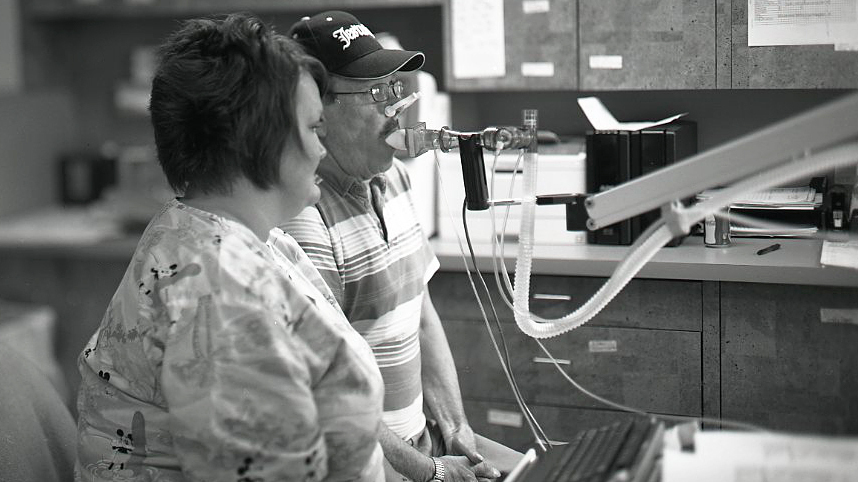 Coal miners are tested for black lung. Recently, the deadly disease has been discovered in younger miners and at more advanced stages.

"Maybe if we didn't do it this way, they'd come in and shut down the mines," Neil remembers thinking. "Then we'd be out of work."

Neil now suffers from advanced black lung, as does Randall Wriston, whose last job underground was in a West Virginia coal mine four years ago.

"If I would have [worn] a dust pump 50 percent of the time, they would have shut down," Wriston says, because the mine would be out of compliance for having too much dust. "If they would get a bad sample they'd turn them upside down and shake them, and that would give a false reading. So, they'd come back and do it some other time."

Miners, former miners and current and former federal regulators told NPR and CPI about dust pumps tucked into lunch boxes or under clothing or out in mine shafts with fresh air — anywhere away from coal dust.

It's unclear what happened with vigorous criminal prosecution after 2002. MSHA tells CPI and NPR that there were no "closed cases" of dust sampling fraud in the last decade, which indicates no criminal convictions. The agency refuses to disclose how many violations, if any, were sent to the Justice Department for possible prosecution, citing a policy forbidding disclosure of the "existence or potential existence of open criminal cases."

Many of the mines with violations are owned by some of the nation's largest mining companies. In some cases, sampling was considered so egregiously deficient that MSHA withdrew dust-testing certification for 14 mining company managers and contractors. Eleven others were formally warned about deficient sampling.

"At times, the ventilation controls are not in place. The water sprays are not in place," says Joe Main, assistant secretary of labor for mine safety and health. "We find that the sampling process that is used is not as required by the standards."

That's what investigators discovered after the deadly 2010 explosion at Massey Energy's Upper Big Branch mine in Raleigh County, W.Va. Several workers at the mine told investigators they were ordered to manipulate dust sampling, according to a story in The Charleston Gazette that supplements the NPR/CPI investigation.

Federal inspectors also collect mine dust samples. In 24 of the last 30 years, dust samples taken by federal mine inspectors found higher concentrations of coal mine dust than samples provided by mining companies, according to federal data.

In one year, inspectors reported 40 percent more exposure than did the industry.

Despite those differences and the record of fraudulent industry samples, mining companies continue to check their own compliance with the law.

"Government is in a situation where they have to utilize the data that is presented to them," Main says. "And, at times, yes, we have found that the sampling program was not implemented as required."

More recently, industry and government samples have been more consistent, but even the main industry group admits that inaccurate sampling is a serious problem.

"It might be that MSHA should take over the entire program and should be given resources to do that," says Bob Glenn, a former NIOSH official now working as a black lung consultant for the National Mining Association (NMA). "They certainly would be more impartial, you would think, than having the operator take all the samples."

That's what mine safety advocates have argued for years, but Main says the agency isn't equipped for the job.

O'Dell of the mine workers union believes MSHA has no choice.

"The operators can't be trusted to do compliance sampling," he says. "History has proven that."

Loopholes Keep Mine Companies Within The Law

* The law permits sampling at only 50 percent of average production, when miners have as little as half the exposure.

* Sampling is required only eight hours a day even though miners work at least 10 hours a day on average. That amounts to about 600 hours of exposure a year that is not measured in the sampling.

* If federal mine inspectors' findings show too much coal dust, mining companies get a do-over. They take five of their own samples and average them. The sample with the greatest exposure is often discounted. If the average then meets the exposure standard, the violation disappears.

The do-overs may also explain something else CPI and NPR found in federal mine safety records. Between 2000 and 2011, MSHA issued a relatively small number of coal mine dust violations despite thousands of samples with excessive dust. MSHA data show that 53,000 valid samples contained more dust than standards permit but the agency issued less than 2,400 violations.

"The current rules have been in effect for decades, do not adequately protect miners from disease and are in need of reform," says mine safety chief Joe Main. "That is why MSHA has proposed several changes to overhaul the current standards and reduce miners' exposure to unhealthy dust." 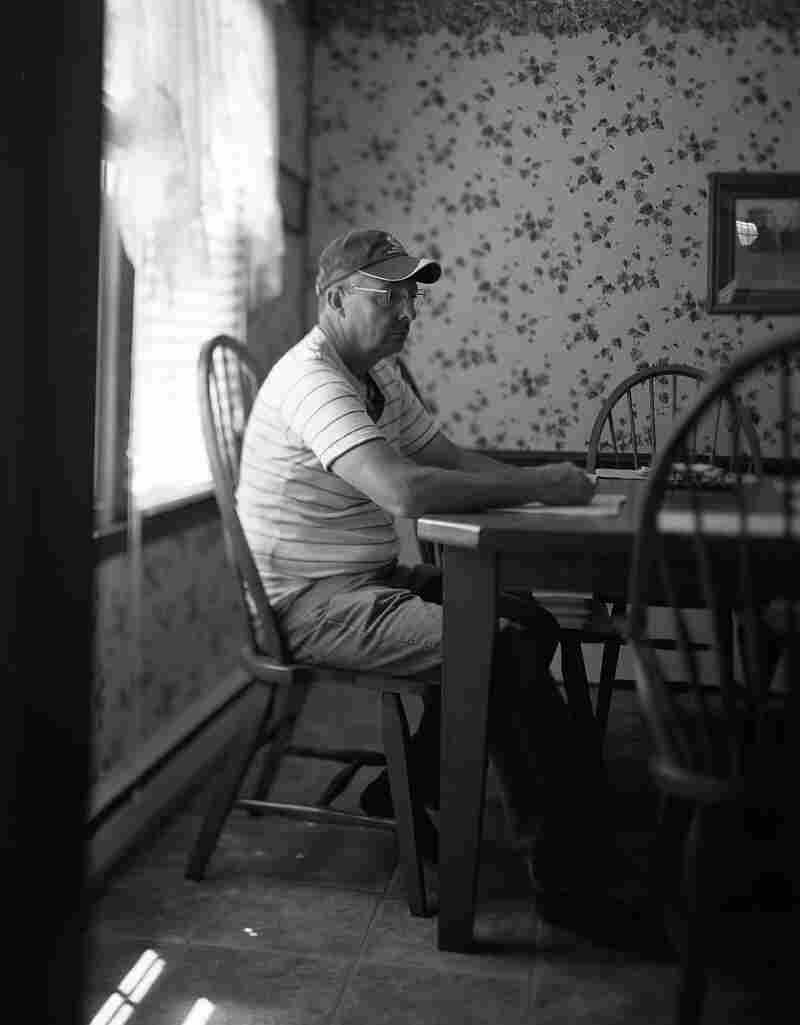 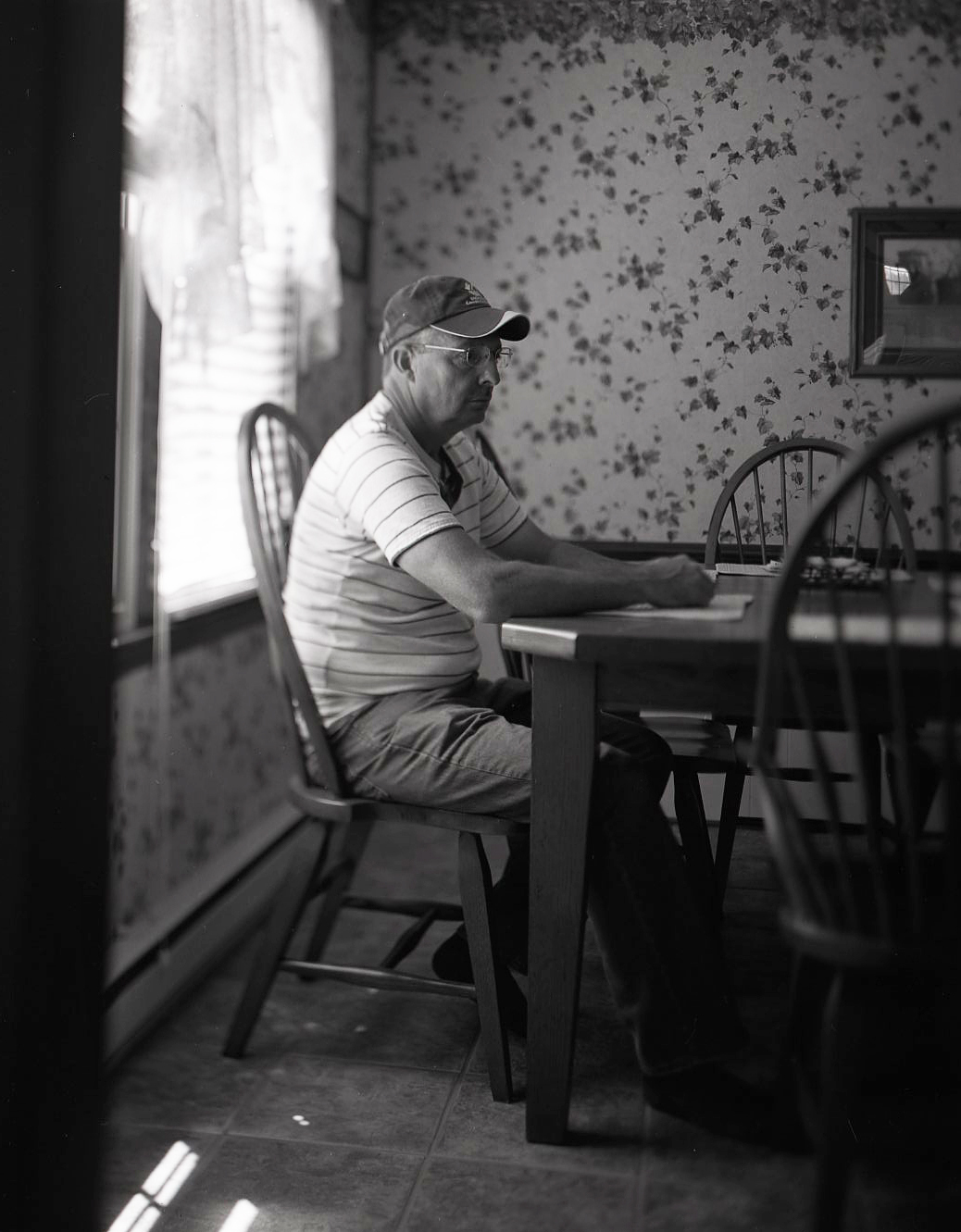 MSHA proposes some significant reforms. Coal mine dust limits would be cut in half. Sampling would more accurately reflect actual exposure. And mining companies would no longer be able to demonstrate compliance by averaging five dust samples. But, self-policing would continue with mining companies still collecting their own samples.

"We encourage our members to fulfill their obligations under the law," says Bruce Watzman, who directs regulatory affairs for NMA, the coal industry trade group.

But he recognizes the system lacks credibility.

"We need to get to a point where we remove this cloud of controversy and instill in the minds of everyone that the samples are accurate," Watzman adds. "The best way to do that is to have MSHA take responsibility for that."

In Pounding Mill, Va., McCowan considers all of this as his disease worsens. He says he wants mining companies and MSHA to take more responsibility.

McCowan suggests production studies that would determine how much coal mines could produce at a rate that would not create excessive dust. He'd also have federal mine inspectors watching every minute when mine companies take dust samples.

"Coal mining is as dirty as the coal operator wants to make it," he says, drawing a deep breath. "I don't think it's turning out too good for the miner."