Accessibility links
How To Fill An Empty Bird's Nest: Beijing's Olympic Woes Every four years, organizers of the Olympic Games promise that expensive facilities will be put to good use after the crowds depart. But saddled with high maintenance costs, Beijing's Olympic venues, such as the Bird's Nest stadium, are struggling to find an afterlife. 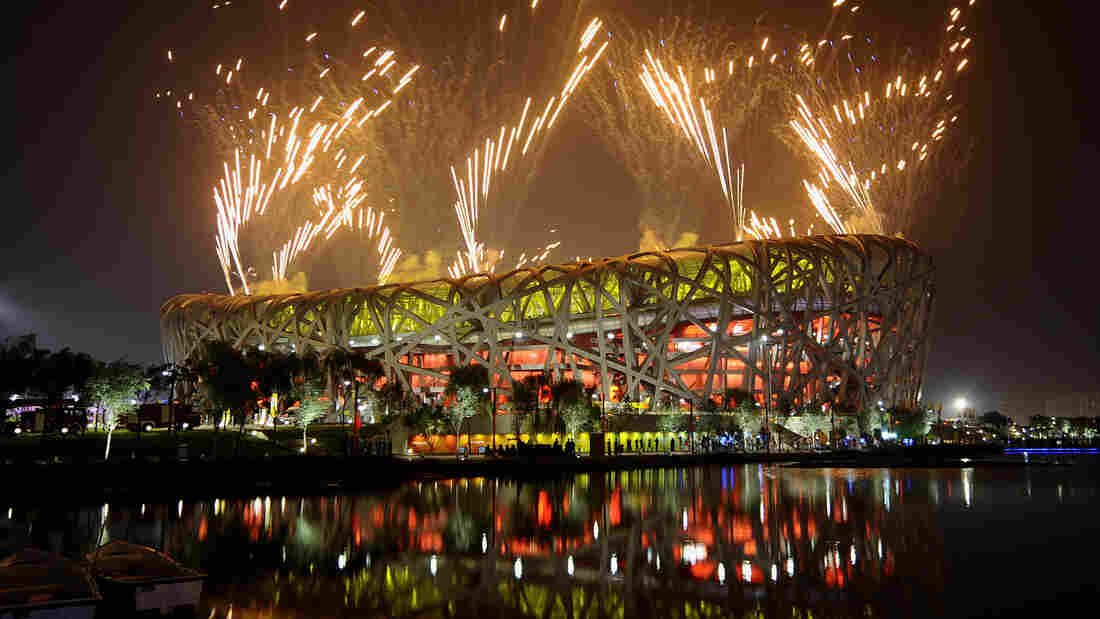 Fireworks light the night sky above the National Stadium, known as the Bird's Nest, during the closing ceremony of the 2008 Beijing Olympic Games. The stadium is largely empty these days. Franck Fife/AFP/Getty Images hide caption

As the opening date for the London Olympics nears, Beijing's acclaimed Olympic venues are saddled with high maintenance costs and are struggling to get by. And the most famous, the Bird's Nest stadium, has been repudiated by its own creator, dissident Chinese artist Ai Weiwei.

To the bang of drums and the roar of the crowds, Beijing's 2008 Olympics opened with a boom. The spectacular opening ceremony was fitting for the spectacular Bird's Nest. Girdled with strips of concrete, it was an ambitious structure for a new superpower. 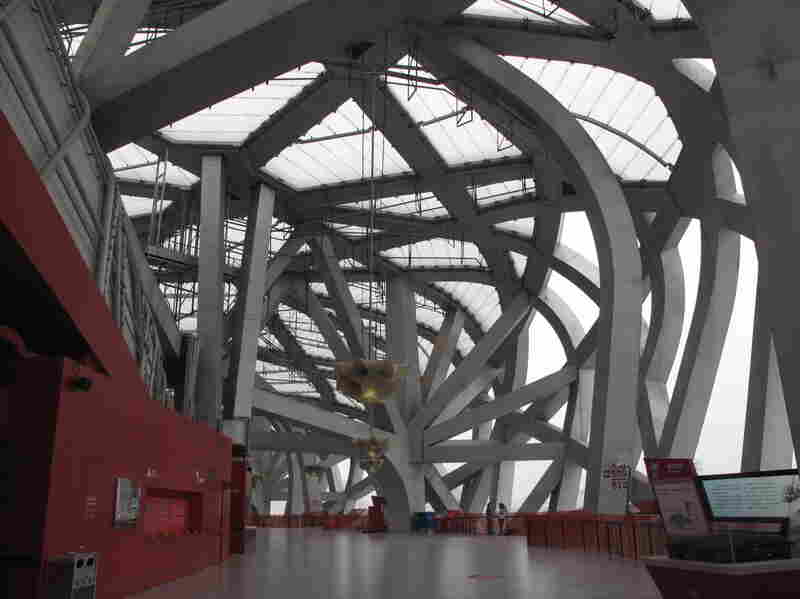 The Bird's Nest, with its cavernous arches, has fewer and fewer visitors these days. Few events can fill a stadium built to seat 91,000. Louisa Lim/NPR hide caption 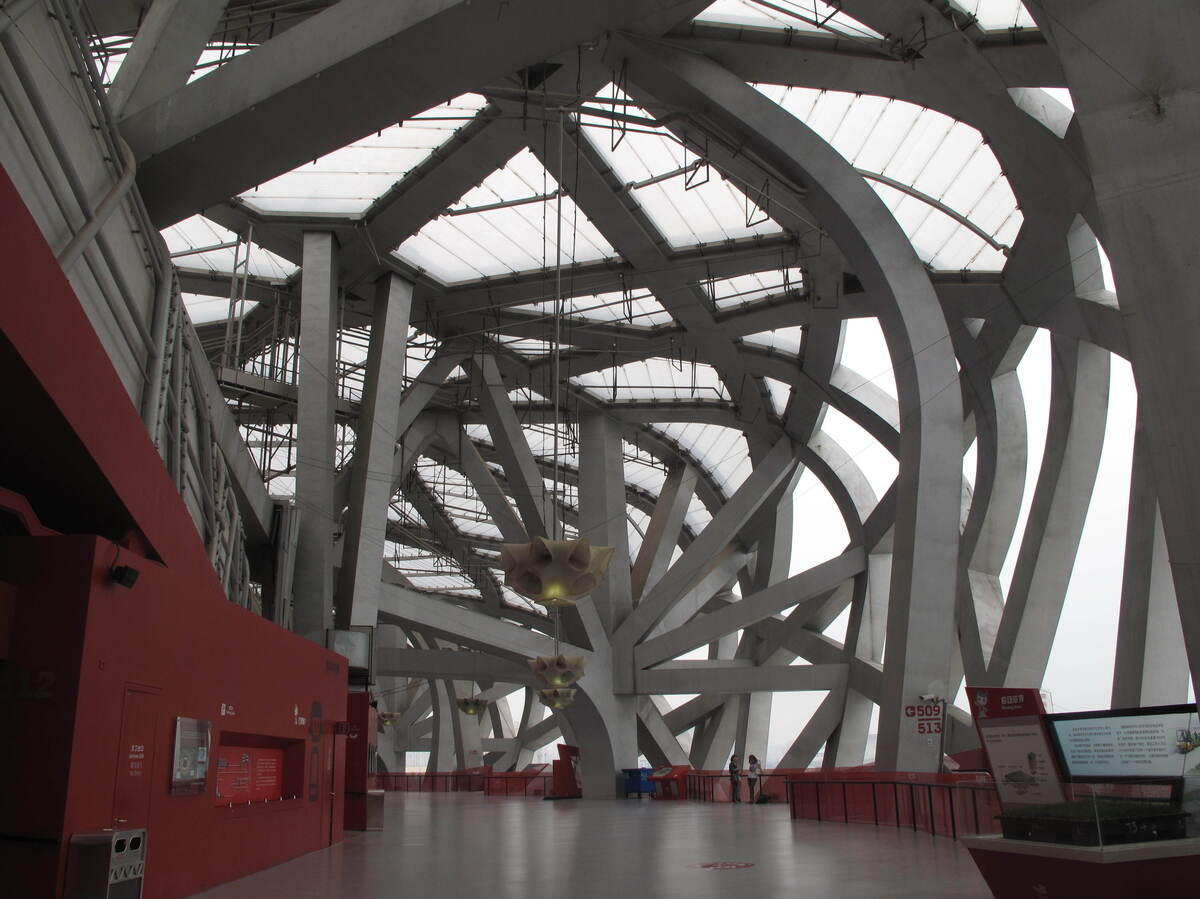 The Bird's Nest, with its cavernous arches, has fewer and fewer visitors these days. Few events can fill a stadium built to seat 91,000.

But four years on, the Bird's Nest is looking tired and empty.

A 'Kind Of Dirty' Construction Zone

These days, a smattering of mostly Chinese tour groups trickles though the stadium. Visitor numbers are in free fall: They plummeted by half in the first six months of 2011 compared with a year before, according to state-run media. The Bird's Nest cost $480 million to build, and its upkeep costs $11 million a year.

But the only international visitors sitting in the stands on a recent day aren't impressed. 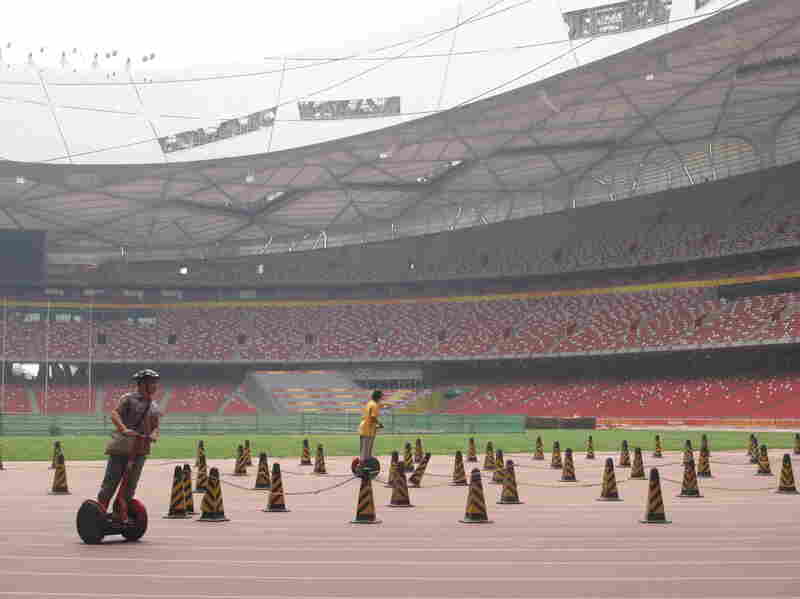 One money-making scheme has been to lease out Segways to tourists: $20 for a 15-minute ride around the Olympic track at the Bird's Nest. Louisa Lim/NPR hide caption 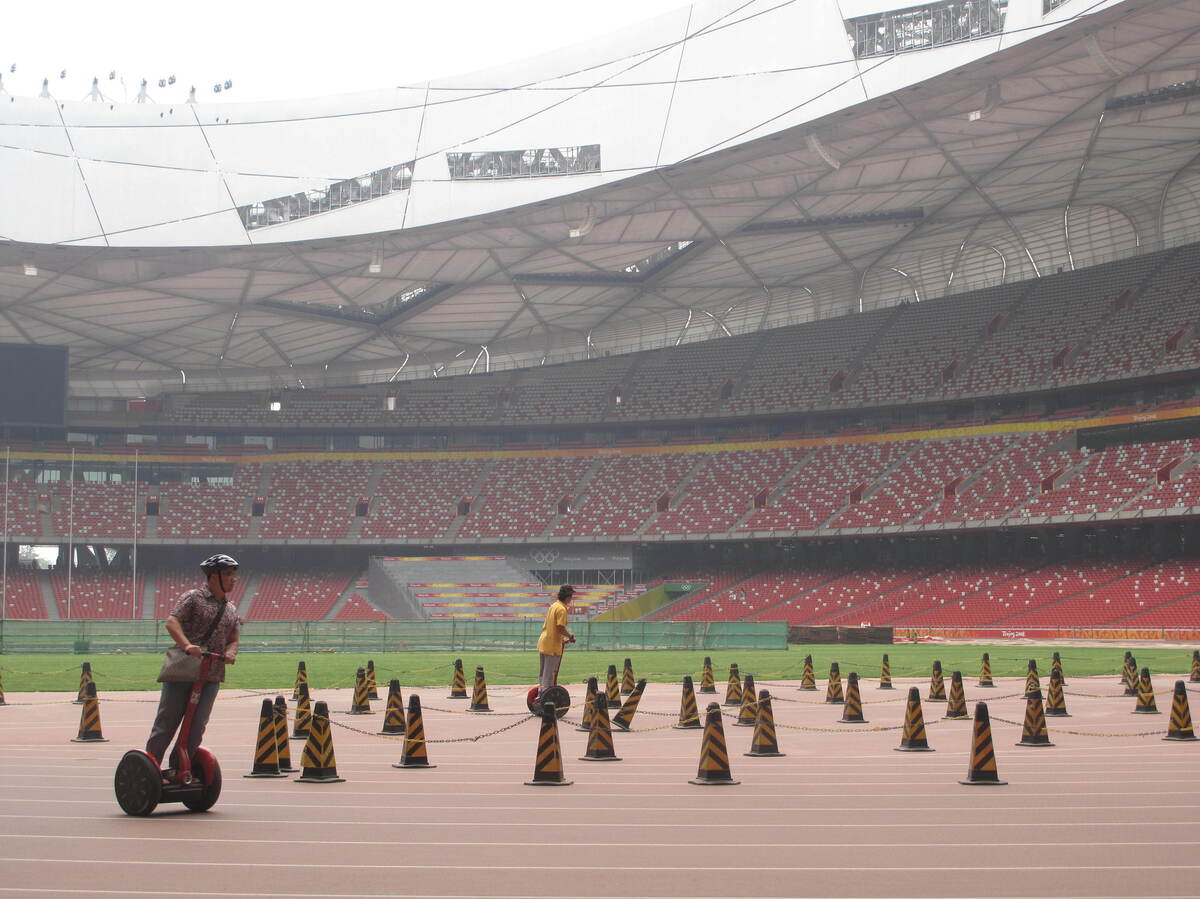 One money-making scheme has been to lease out Segways to tourists: $20 for a 15-minute ride around the Olympic track at the Bird's Nest.

"For me, it's just a huge concrete place," says German tourist Christian Lodz. "Personally I think, after four years, it looks a little bit shabby."

"What I think is interesting is that it's just not used for anything useful," says his countryman Henne Zelle, waving at a crane and tarpaulins in the middle of the stadium. "There's a construction zone there, and it's kind of dirty." 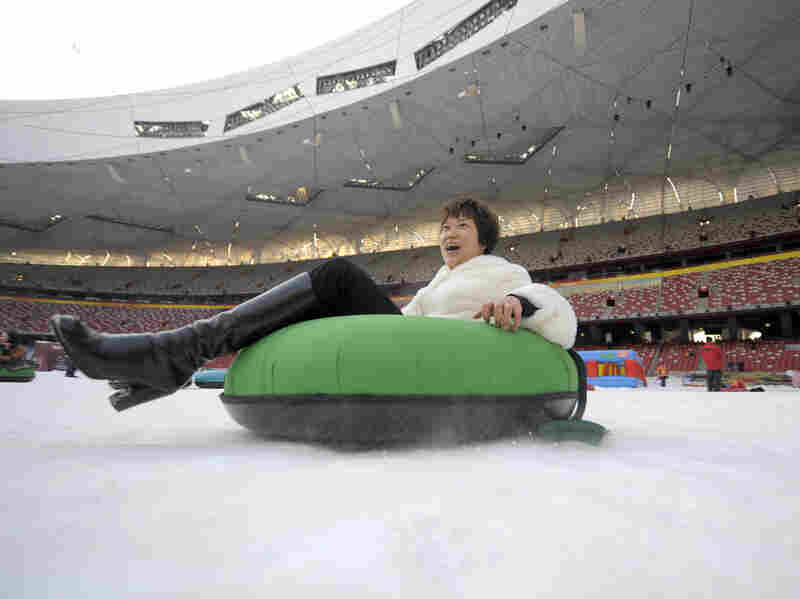 A woman goes snow-tubing in January 2010 inside the Bird's Nest, which was transformed temporarily into a winter theme park. Liu Jin/AFP/Getty Images hide caption 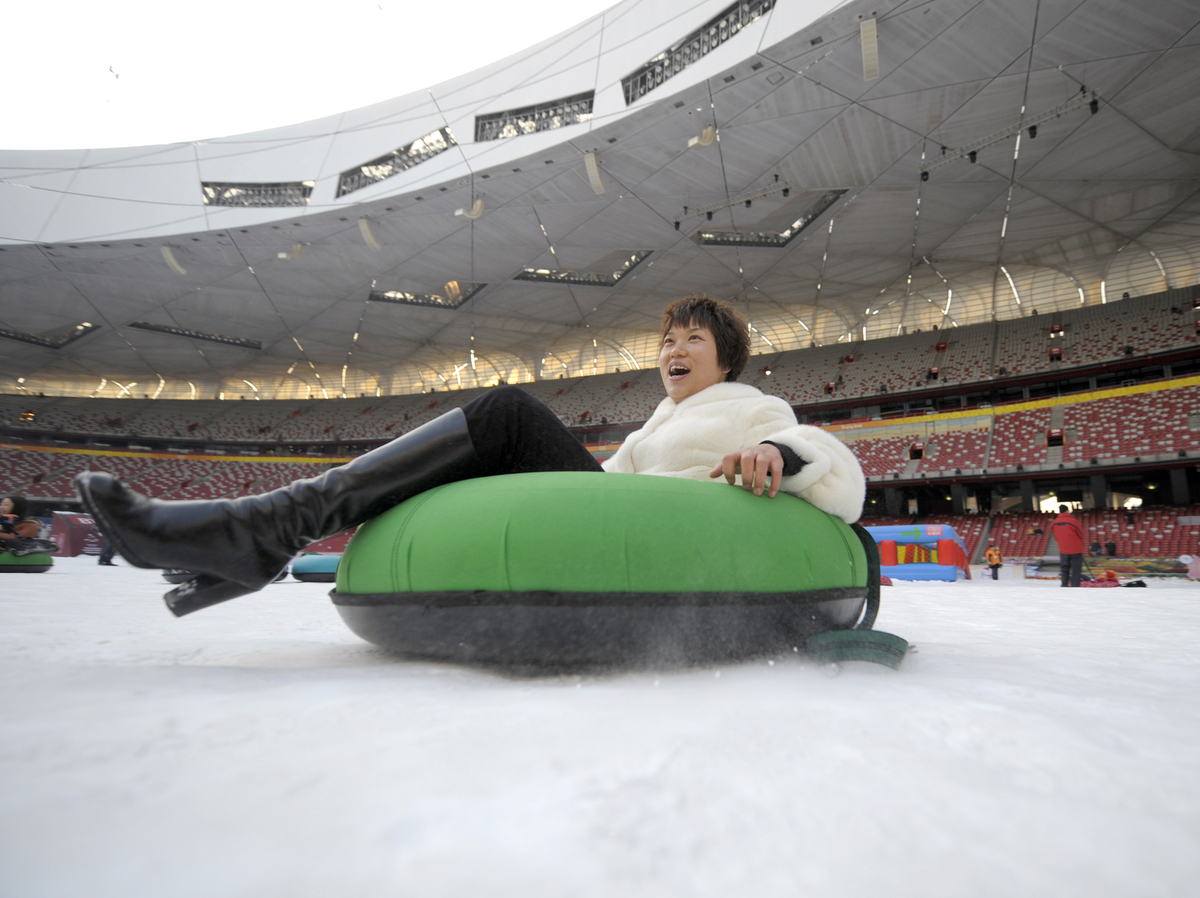 A woman goes snow-tubing in January 2010 inside the Bird's Nest, which was transformed temporarily into a winter theme park.

The problem is how to fill the empty expanse of seats; the stadium is designed to house 91,000 spectators.

Since the Olympics, a number of tactics have been tried: The construction of man-made ski slopes turned it temporarily into a winter wonderland, and tightrope walker Adili Wuxor spent two months living suspended on a tightrope above the Bird's Nest trying to set a new world record.

It's a far cry from the world record set by Jamaican sprinter Usain Bolt, who set the mark for the 100 meters and the 200 meters in the packed Bird's Nest. Now, tourists wobble around the same track on Segways, which they hire for just over $20 for 15 minutes.

There's even a small waxworks museum, exhibiting figurines of all the past and present presidents of the International Olympic Committee. When he called Beijing's Olympic venues "beautiful" and "unprecedented," current IOC President Jacques Rogge can hardly have known he would be immortalized in wax inside one of those venues, always photo-ready, should the visitor be willing to part with $1.50 for the privilege.

But the long-term future of the stadium is unclear. The Beijing soccer team, Guo'an, shied away from making it their home, perhaps wary of the costs. There are few events that can fill enough seats.

This summer, the stadium stands unused — except as a tourist destination — for three months, from the end of an equestrian show in May until its next engagement, a soccer match between British teams Arsenal and Manchester City at the end of July.

The Beijing National Aquatics Center, on the other hand, has found an afterlife. Known as the Water Cube, the translucent color-shifting building, where the swimming events were held, is the only Beijing Olympic venue that was financed by public donations, in this case by 350,000 overseas Chinese. 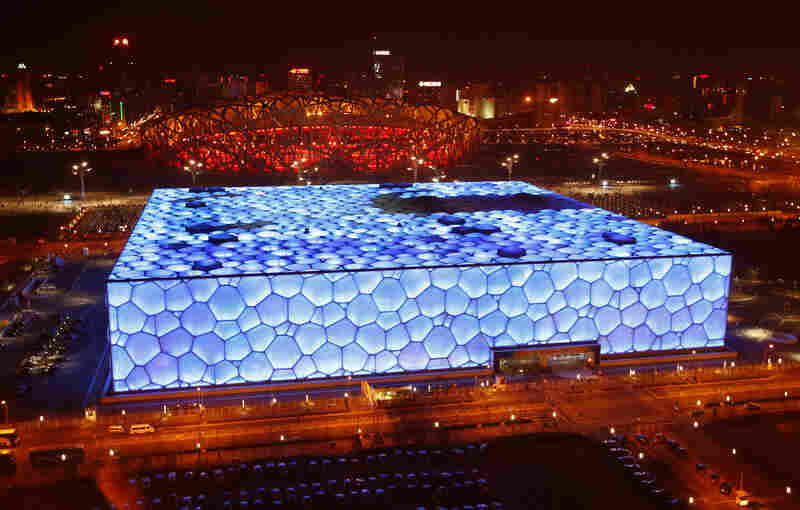 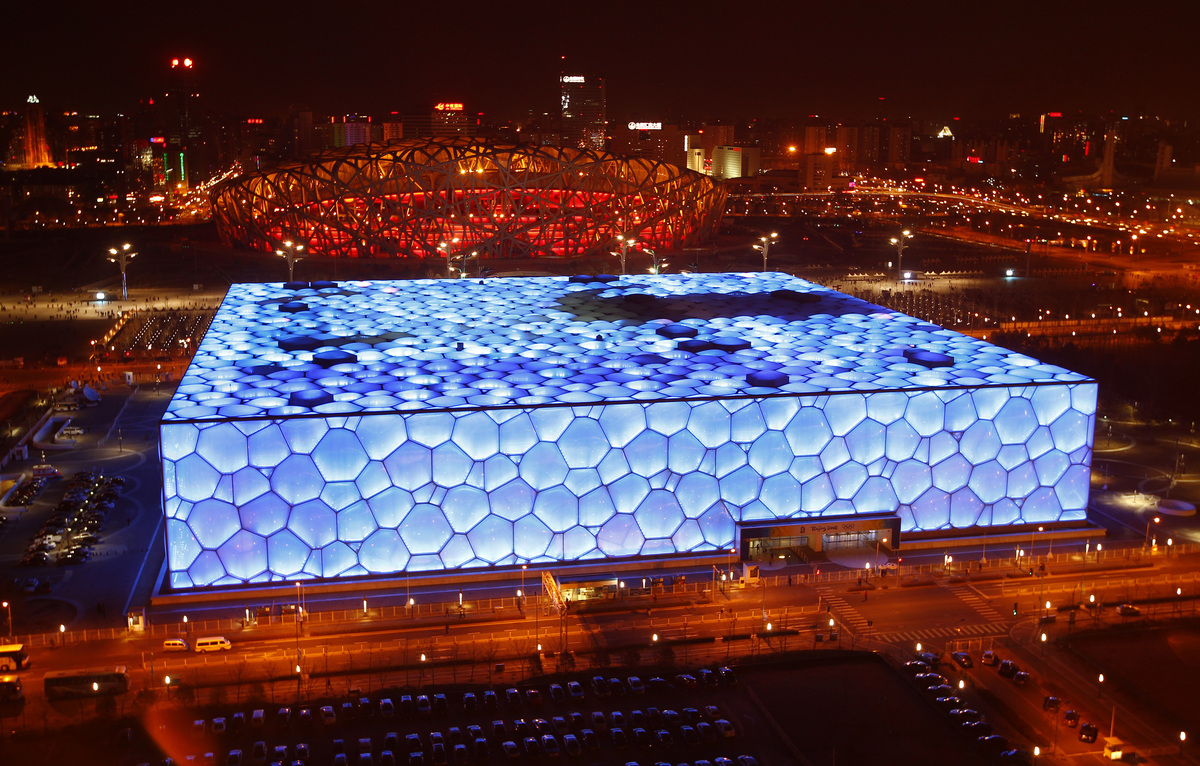 The National Aquatics Center, also known as the "Water Cube," was the Olympics venue for swimming events.

Now, one part of it has been turned into a water park, where swimmers shoot down colorful tubes into the pools of water. It's even launched a line of branded goods, including Water Cube alcohol, which sells at a cool $150 a bottle.

"It's extremely, extremely difficult not to lose money," Yang Qiyong, the Water Cube's deputy manager, says with a frank laugh. 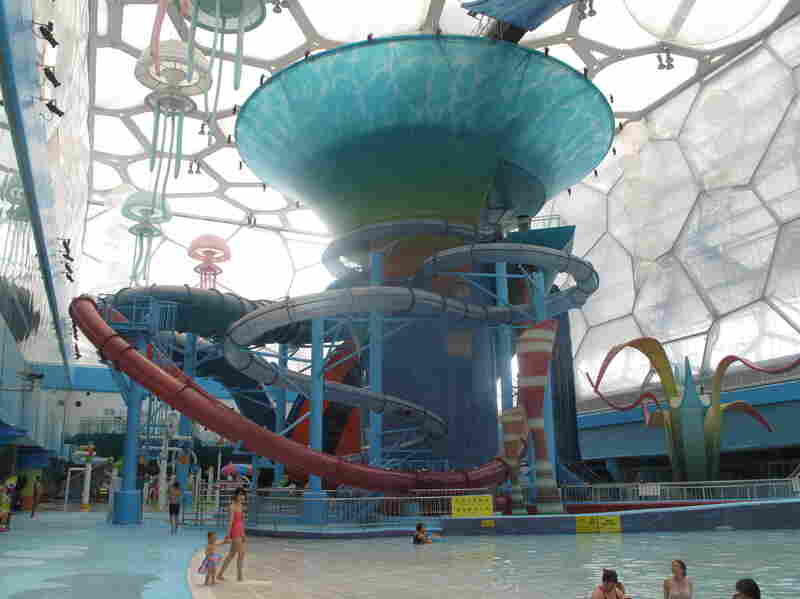 The Water Cube has found an Olympic afterlife, with some of the building converted to a water park. Louisa Lim/NPR hide caption 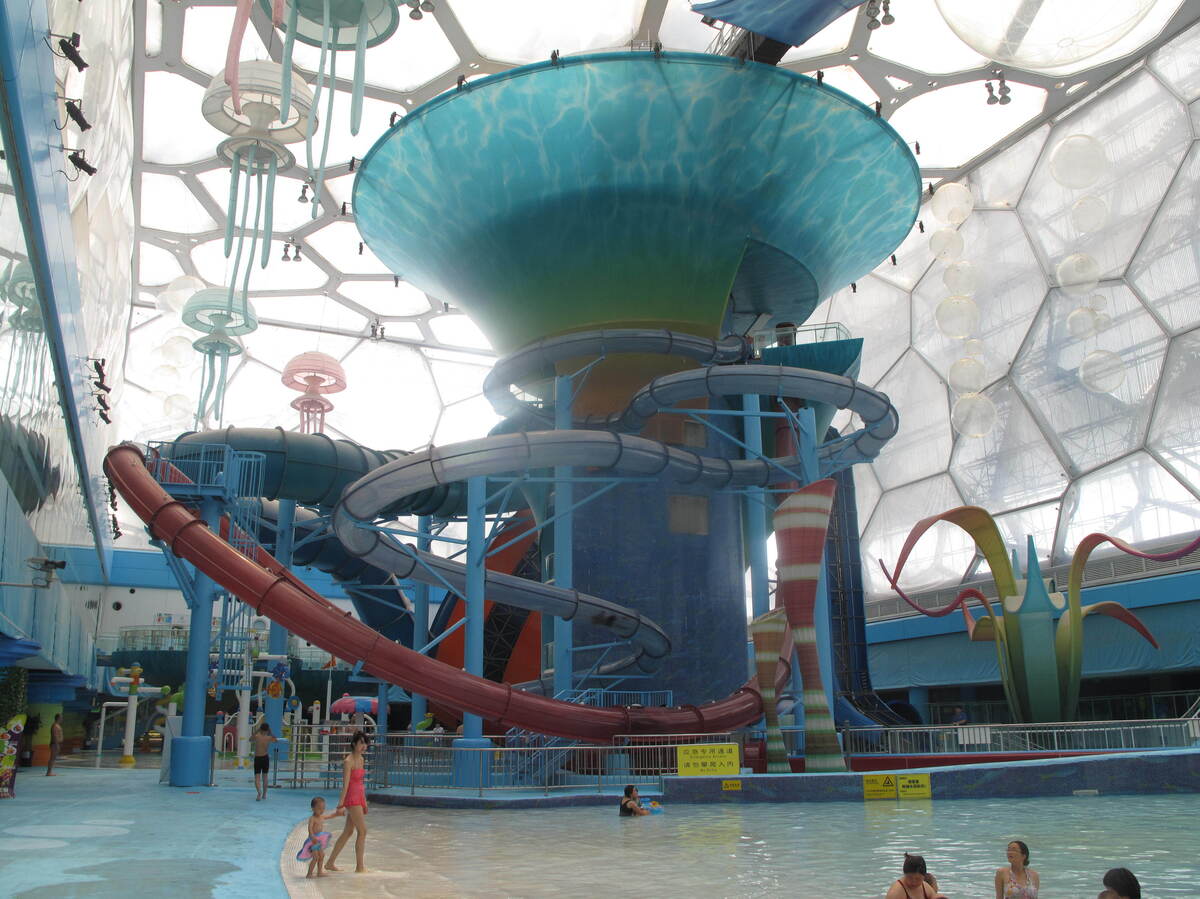 The Water Cube has found an Olympic afterlife, with some of the building converted to a water park.

He angrily denies state-run media reports that the facility lost $1.5 million last year. But according to the state-run Global Times, Yang says the Water Cube attracted nearly 2.1 million visitors in 2011, 30 percent fewer compared with the year before.

"Although we put in a lot of effort, the trend of diminishing numbers can't be reversed," he says.

"Without that money, we couldn't hold important sports events. Some international competitions clearly lose lots of money. But in order to maintain our venue's image, we must host them," Yang says.

And it's all about image.

"It really is worth it," Yang says. "Regardless of whether you're talking about Beijingers or Chinese people, we needed a landmark venue, a place whose image is beautiful."

Chinese tourist Wang Xiaoyu feels the same way, as he stands inside the Bird's Nest for the first time.

"I'm proud that China has this great architecture, that it can build such a great world monument. How can you not feel proud?" he asks, beaming from ear to ear.

The official audio tour describes the stadium in these symbolic terms: "The Bird's Nest, as a symbol of the rise of the Chinese nation, will follow the nation's footsteps in its rise to glory."

But the Chinese artist who helped conceive of the Bird's Nest now says he regrets having designed such a monument to China's Communist leaders.

Ai Weiwei designed the stadium, together with Swiss architects Jacques Herzog and Pierre de Meuron. But Ai has never set foot inside the finished building.

He told NPR that the stadium has become entirely divorced from ordinary people.

"We love this building, but we don't like the content they have put in, the kind of propaganda. They dissociated this building [from] citizens' celebration or happiness; [it's] not integrated with the city's life," Ai said. "So I told them I will never go to this building."

The triumphant music pumped out into the Bird's Nest over video of cheering crowds now falls into a vacuum. It was designed as a stage for China's coming-out party, to send a message to the world. But in this land of government-backed vanity projects, this empty, echoing stadium now sends a very different message.