Accessibility links
'Globals' Generation Focuses On Experience For a growing number of U.S. college students and young adults, the idea of building an American dream is to think internationally. They are a group that pollster John Zogby is now calling "the first globals." 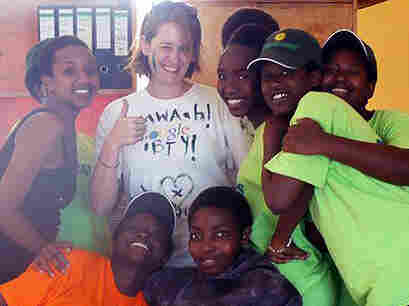 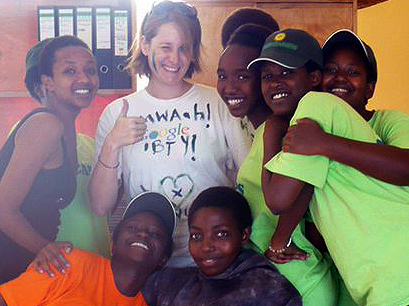 Jennifer Larr (center) is seen here in Rwanda at the Gashora Girls Academy, where she was a teacher in 2011. Larr is part of a new generation of young adults focusing on travel, studying abroad and global experiences.

Jennifer Larr has the itch to go abroad. She's 26 years old and has already spent a year studying in France and two years in Rwanda with the Peace Corps, and she is headed to Uganda this summer for an internship. She's also a graduate student, studying international relations at UCLA.

Larr is part of a growing number of 20- and early 30-somethings whose American dream has moved beyond suburban homes and traditional nuclear families, and it's one that now goes even beyond U.S. borders.

Larr and others like her are more likely than previous generations to live, study and work abroad. As they travel the world, they're now abandoning some of the traditional tenets of the American dream that their parents held dear.

National pollster John Zogby has been chronicling this trend for years. His book The Way We'll Be: The Zogby Report on the Transformation of the American Dream discusses some of the changes taking place in Larr's generation. He has a name for young people like her: "first globals."

They understand this idea of a shared fate, or a linked fate. That somehow, what happens to somebody in Mumbai may have an effect on me in West Los Angeles.

"Two out of three of them have passports," Zogby says. "They are well-traveled; technologically they have networks that include people all over the world. They have a desire to be nimble, to go anywhere and to be anywhere. They also have a desire to change their world and feel like they're in a position to do that."

It's a generation just as likely to watch the World Cup as it is the Super Bowl. It's not, however, just the children of the wealthy and the educated, says Zogby. "This is expanding beyond the Wellesleys and the Stanfords," he says. "It's different now."

There are a few reasons why. More than 270,000 students studied abroad in the 2009-2010 school year, according to the International Institute of Education. That number is three times what it was two decades earlier. At the same time, the Internet and social media have made every part of the world seem instantly accessible. America's youth is just more diverse — and international — than ever.

On top of being globally minded, Zogby says, these first globals have a different perspective on the idea of ownership as a tenet of the American dream. They are putting less emphasis on accumulating traditional things like homes, cars and the types of families their parents had. Instead, they're putting more energy into acquiring experience.

Larr, for instance, says she can do without the house and the kids.

"People will always rent you apartments wherever you go, [and] not every woman wants to have a child and be a mother, and be in the house all the time," Larr says.

She could even do without the marriage.

"I've been in a really long-term relationship, and we're really happy the way we are. We can be committed to each other without necessarily having someone approve it," she says.

Zogby says that all of this is reflected in his research, and that much of what made older generations tick just doesn't work for first globals.

For many of these first globals, the idea of public service is a common thread. La Mikia Castillo, 28, recently graduated from USC's Price School of Public Policy. Her family is from the U.S. and Panama, and she has studied and traveled in Mexico, Costa Rica and Guatemala.

"My American dream is for other people to be able to achieve whatever they want to achieve," Castillo says. "It's not really about me and what I have as an individual. It's about trying to make a difference around the world."

"It's a sea change in orientation," Gilliam says. "They understand this idea of a shared fate, or a linked fate. That somehow, what happens to somebody in Mumbai may have an effect on me in West Los Angeles."

Julia Capizzi, a 33-year-old recent USC graduate who is studying for the Foreign Service exam, agrees.

"The larger world beyond L.A., beyond Chicago and my immediate experiences is an extension of me," Capizzi says. "So I feel an obligation to know what that is. Otherwise I feel like I'm walking around with blinders on."

Capizzi also says her American dream is better than that of her parents, because she and people like her aren't afraid to literally go anywhere to accomplish their goals.

"I think that my generation will be more fulfilled than my parents' generation," she says.

But she admits that she had to make some sacrifices to live the life of a first global. She doesn't own a car or a house, and she says she would love to have already owned a house. There are a lot of different parts of her life, she says, that she's had to come to peace with to pursue her goals.

In spite of any reservations, the Capizzis, Castillos and Larrs are here to stay, says Zogby, as is their new take on the American dream, and it may upend traditional ideas of family and citizenship as we now know it.

"[There are] going to be so many families out there where Papa's in Singapore and Mama's in Mauritius, and Baby is somewhere back and forth," he says.

The question is, what will that baby's dream be? And will it even be called American?

The audio of this story, as did a previous Web version, incorrectly gives Jennifer Larr's age as 24. She is 26.