Accessibility links
The Nation: A Lot To Like In Obama's Tax Proposals As the election-year debate over the Bush tax cuts heats up, The Nation's George Zornick endorses the President's plan to let rates rise for the wealthiest earners, with some reservations.

The Nation: A Lot To Like In Obama's Tax Proposals

The Nation: A Lot To Like In Obama's Tax Proposals 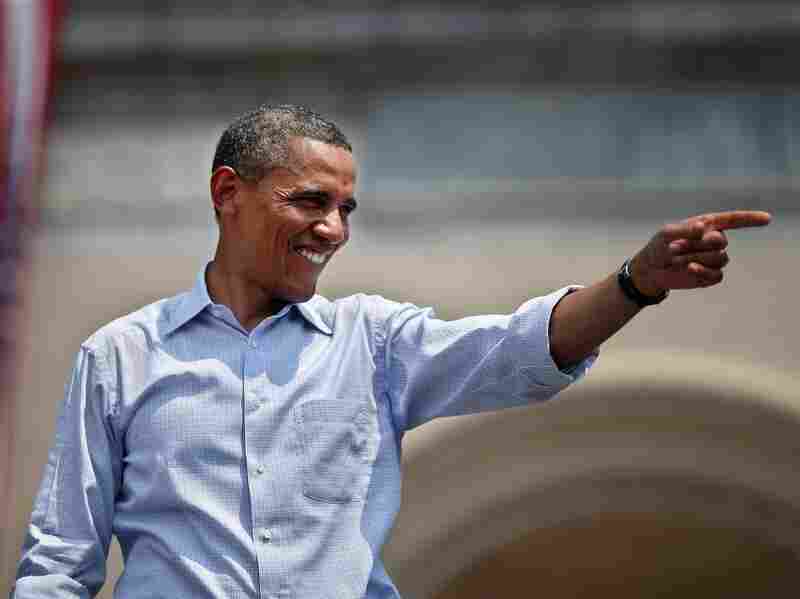 President Barack Obama waves to his supporters at a campaign event on the College of Fine Arts Lawn at Carnegie Mellon University July 5, 2012 in Pittsburgh, Penn. After returning from two days of campaigning, the President laid out his proposal for the Bush tax cuts yesterday. Chip Somodevilla/Getty Images hide caption 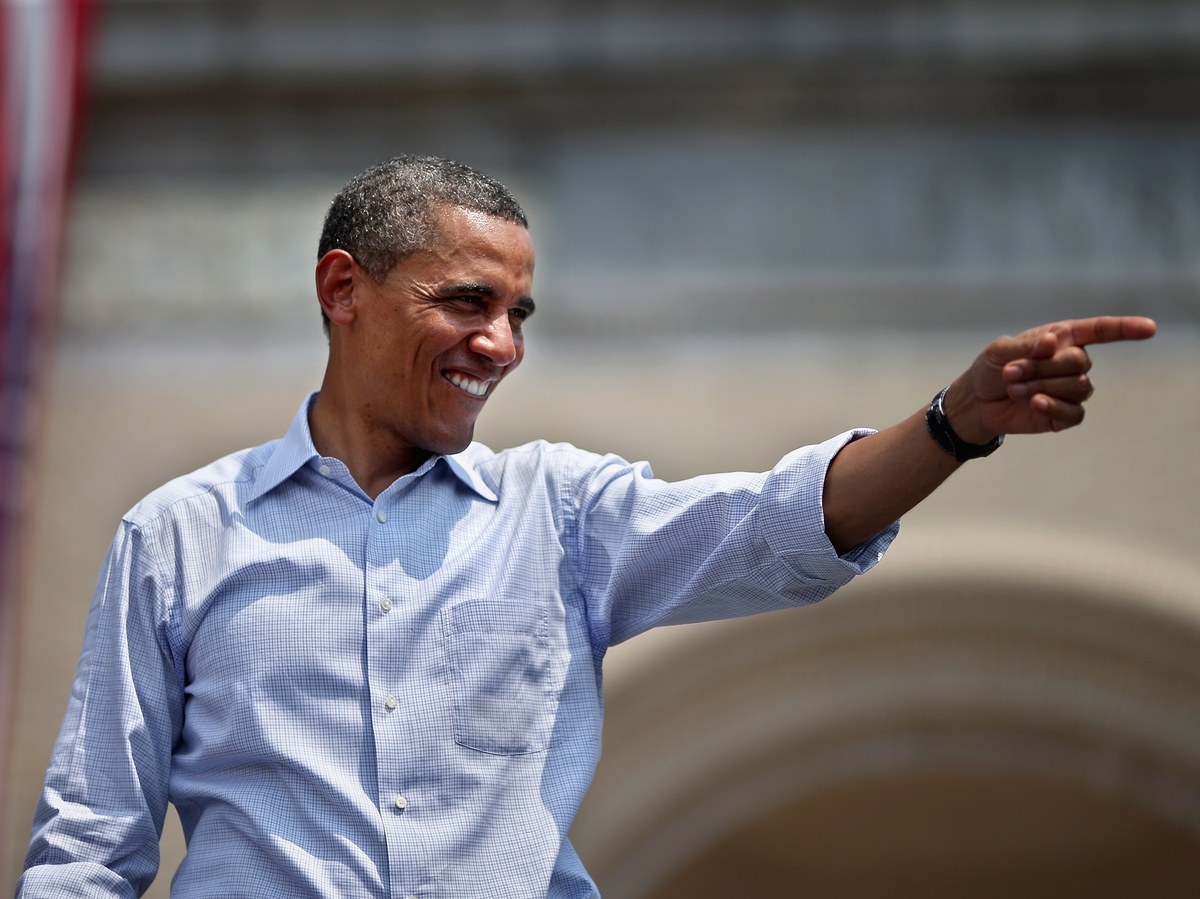 President Barack Obama waves to his supporters at a campaign event on the College of Fine Arts Lawn at Carnegie Mellon University July 5, 2012 in Pittsburgh, Penn. After returning from two days of campaigning, the President laid out his proposal for the Bush tax cuts yesterday.

Read An Article About A Third Way In The Tax Debate

George Zornick is a Washington reporter at The Nation.

President Obama appeared at the White House on Monday to push for an extension of the Bush tax cuts for one year, except for earners above $250,000 — there, the president is "100 percent committed" to letting those tax cuts expire, in the words of senior campaign adviser Robert Gibbs.

Let's get this out of the way up front: there's no way Congress reaches a deal on this before the November elections, nor even makes a meaningful effort. Republicans think they could win control of the Senate, so there's no reason to negotiate now from a weaker position, and Democrats believe the same about their chances to retake the House.

Rather, tax justice is clearly something Obama's team believes can be a powerful election-year narrative. (A belief no doubt shared by Republicans, for inverted reasons).

But that doesn't mean the new push isn't extremely meaningful. The idea is to claim one side of the debate about raising taxes in general, and tax cuts for the wealthy in particular, and then see how the election pans out — and then claim a mandate afterwards. That's the framing Obama explicitly claimed at the White House today — he said, "In many ways, the fate of the tax cut for the wealthiest Americans will be decided by the outcome of the next election."

Furthermore, Democrats are trying to (accurately) convey the insanity of the Republican absolutism on taxes — that no taxes should be raised anytime on anyone — to weaken the party's just-say-no approach going forward. By highlighting a broadly unpopular tax cut for the wealthy, Obama can portray Republicans (again, accurately) as both unreasonable and slavishly dedicated to protecting the rich. Said Obama at the White House:

Nowhere is that stalemate [in Washington] more pronounced than on issue of taxes. Many members of the other party believe that prosperity comes from the top down, so that if we spend trillions on tax cuts for the wealthiest Americans, that that will somehow unleash jobs and economic growth. I disagree. I think they're wrong. I believe our prosperity has always come from an economy that's built on a strong and growing middle class.

Obama also noted that "I'm not proposing anything radical here," which is true. Allowing the Bush tax rates for earners over $250,000 would affect only 1.9 percent of the population (and ironically, most heavily in blue states, not red).

Actually, though the White House isn't pushing this fact, Republicans and Democrats are simply arguing about is how big of a tax cut to give the top 1 percent. Since Obama is advocating a one-year extension of the Bush rates for income up to $250,000, that means the top 1 percent are still getting a break on their first quarter-million dollars of income, relative to just letting everything expire. It's just that Republicans want to give them a much bigger break: (via Citizens for Tax Justice): 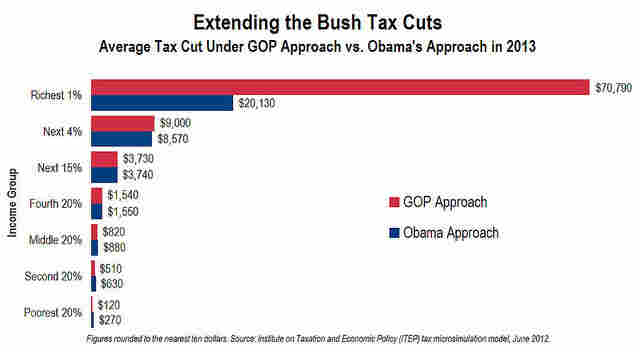 via The Nation Citizens For Tax Justice hide caption

Obama made a point to pre-empt common attacks on allowing the Bush rates for top earners expire by Republicans who, rather than explicitly defend the wealthy, like to say that the expiration would hurt small businesses. But Obama noted that 97 percent of small businesses wouldn't be affected, something that even House Speaker John Boehner has acknowledged in the past. Obama also noted that the expiration for top earners is a poor form of stimulus, which is also true. Even making all the Bush rates permanent is a less effective form of stimulus than infrastructure spending, unemployment benefits, federal work-share programs and increasing food stamps — all measures Republicans oppose. Again via CTJ: 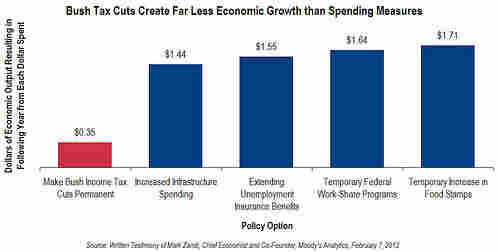 via The Nation Citizens For Tax Justice hide caption

There's a lot to like in the White House's new push. It's not pre-conceding defeat, as it did when the expiration first came up in 2010. It's taking a position to the left of Congressional Democrats, who want to let only the rates for annual earners over $1 million to expire. The president is explicitly saying he will claim a mandate on raising taxes for the wealthy if he wins re-election, which is crucial heading into the late-year "Taxmageddon" negotiations.

Also, quite notably, Obama only wants to extend the middle-class tax cuts for one year, where in the past he pushed for a permanent extension. The entirety of the Bush tax cuts will cost $5.4 trillion if extended in full from 2013-2022 — more than double the previous decade's cost, since they were phased in slowly. At some point, there's going to have to be a complete tax overhaul that takes into account the true and deep cost of all the Bush tax cuts. By promising a one-year extension only, Obama is settling the table for comprehensive tax reform — and moving left while doing so.