Accessibility links
Justice Delayed: After Three Decades, An Apology The Justice Department on Tuesday apologized to Kirk Odom for the "terrible injustice" of more than two decades spent in prison for rape and robbery. "There is clear and convincing evidence that Mr. Odom is innocent," the government now says, based on DNA tests and hair analysis. 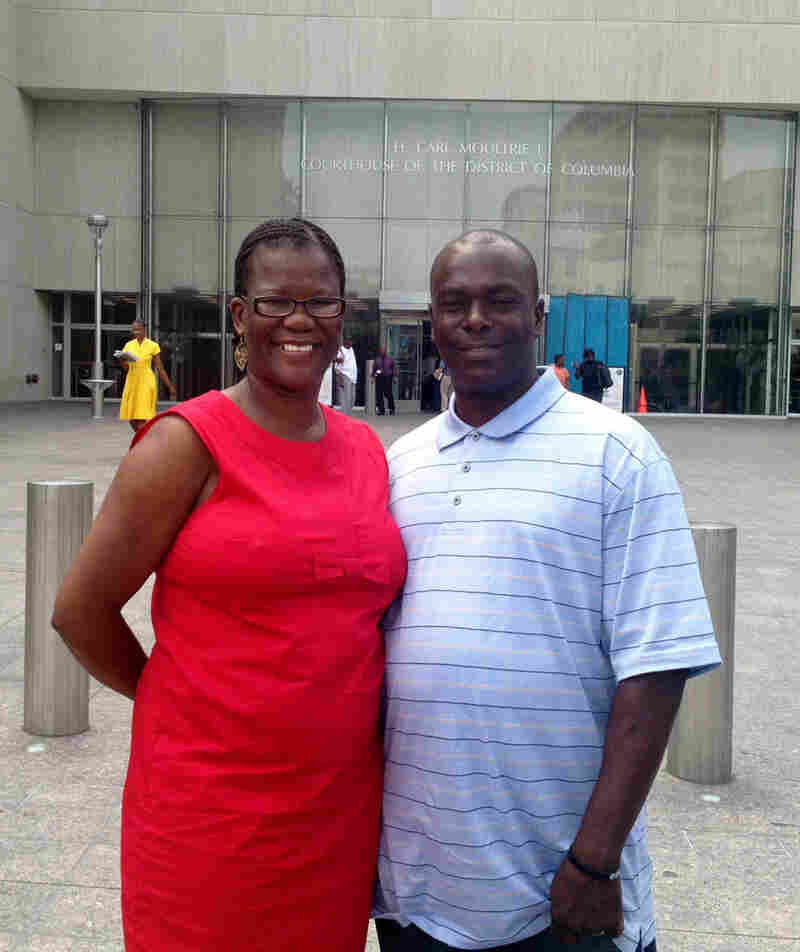 Kirk Odom and his wife, Harriet, outside the H. Carl Moultrie Courthouse in Washington, D.C. On Tuesday, the Justice Department said there was "clear and convincing evidence" that Odom is innocent of a 1981 rape and robbery, for which he spent more than two decades behind bars. Carrie Johnson/NPR hide caption 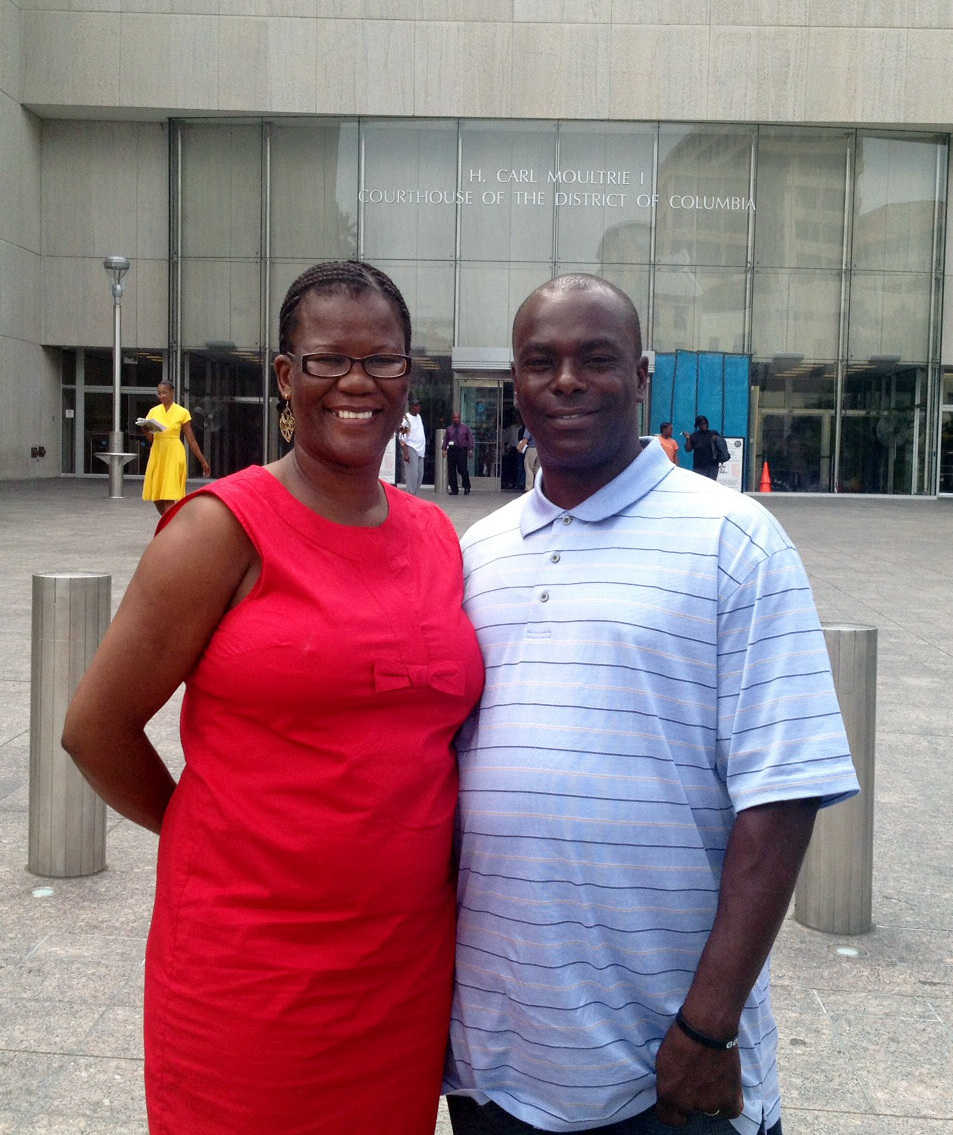 Kirk Odom and his wife, Harriet, outside the H. Carl Moultrie Courthouse in Washington, D.C. On Tuesday, the Justice Department said there was "clear and convincing evidence" that Odom is innocent of a 1981 rape and robbery, for which he spent more than two decades behind bars.

Nearly 31 years after he was convicted of rape and armed robbery, Kirk Odom on Tuesday all but won his fight to be declared an innocent man.

The Justice Department filed court papers saying, "There is clear and convincing evidence that Mr. Odom is innocent of the charges for which he was convicted," and apologized for the "terrible injustice."

Prosecutors confirmed that DNA tests and hair analysis ruled him out as the culprit in a 1981 crime in Washington, D.C., but only after Odom spent more than two decades in prison, was placed on parole until 2047, and was forced to register as a convicted sex offender.

Odom is one of only about 300 people nationwide to be exonerated by DNA after conviction. A judge must sign off on the motion to throw out Odom's convictions, but both sides described that as a foregone conclusion.

Odom met with NPR this week outside the H. Carl Moultrie Courthouse. The building is named after the judge who sentenced him to spend more than 20 years behind bars.

"Well, I wouldn't want to go in there, not in the wrong door, no way," Odom says.

Odom says when he drives, he avoids stopping anywhere near the building in downtown Washington, not far from the historic National Mall. "This is just where, where it all happened at, you know," he says.

At Home, With A Witness

In the spring of 1981, D.C. police accused Odom, then only 18 years old, of breaking into a woman's house, raping her, and stealing hundreds of dollars in traveler's checks.

Odom said he was home at the time, with his mom, waiting for his sister to return from the hospital with her brand-new baby daughter. But neither police nor the jury bought his alibi.

"They didn't believe it. Why? She's my mom, you know, and moms protect their children. So, you know, they just disregarded that," he says.

At the trial, the victim identified Odom, and prosecutors presented evidence that they had matched him to hair taken from the crime scene.

A jury convicted him after only a few hours of deliberation.

The memory causes Odom to groan.

"Justice, justice at the time was just blind," he says. "I mean they were just, they just wasn't, I guess you could say, up to date. ... It was chaos."

That changed a couple of years ago, when another inmate from the Washington, D.C., area was exonerated, in part based on faulty hair analysis.

Letters From Behind Bars

Odom's public defender remembered his case and letters Odom wrote like this one, from 1982:

"I want to know why I have to do time for something I didn't know about," the letter says. "That lady don't know me, and I don't know her."

Sandra Levick, a lawyer at the Public Defender Service in Washington, took up his case. She calls Odom's letters from prison "heartbreaking."

"They are the written cries of someone who has at 18 been arrested for a brutal crime that he had nothing to do with," Levick says. "And at 19, saw himself not only convicted but sentenced to 20 to 66 years in prison."

Odom bounced around the system. It takes him more than half a minute to list all the places he's been incarcerated.

He eventually got out on parole. He found a job fixing heating, air conditioning and plumbing systems. And he found a wife — Harriet Kopi-Odom.

And then Kirk Odom caught another break. At his lawyer's request, the government found stained bedsheets, a robe and that hair from the crime scene. They'd never been tested with state-of-the-art science. When the results came back, they cleared him.

That still left the victim identification. But Levick pointed out some problems.

"It was before dawn. She had the briefest opportunity to view her assailant. The circumstances were terrifying," says Levick. "A gun was held to her head. The victim and her assailant were of different races."

Experts like Jennifer Dysart, who teaches at the John Jay College of Criminal Justice, call bad witness identification "the leading contributing factor to wrongful conviction in this country."

Dysart says all over the country, police have made big changes to the way they conduct lineups (making sure, for instance, that the people running the lineup don't know who the suspect is) and do photo arrays (showing victims pictures one at a time, instead of a whole bunch simultaneously).

Not so much in D.C., where public defenders say legislation in the City Council to reform those practices has been opposed by prosecutors and police.

Odom, who celebrates his 50th birthday on Friday, says he just wants some peace.