Accessibility links
'Vultures' Swoop In For Deals In Debt-Ridden Spain Bargain-seeking investors known as "vultures" are circling Madrid, hoping a shakeout of the banking sector will yield deals at rock-bottom prices. As a condition of Spain's bailout, banks need to get rid of toxic assets such as devalued properties — even if it means taking a loss. 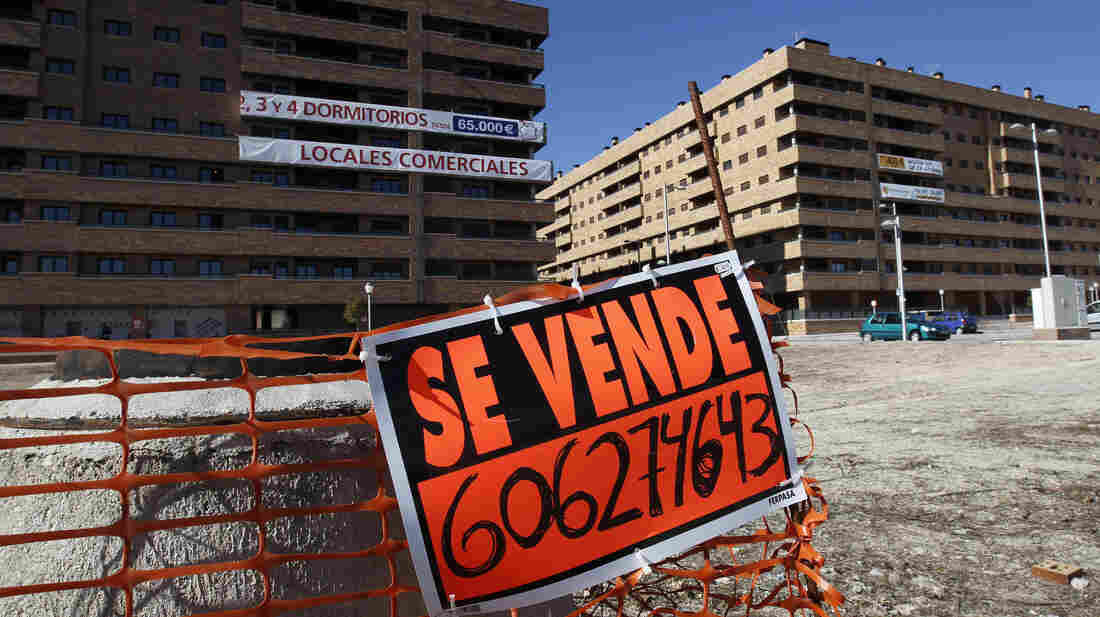 A "For Sale" sign hangs outside mostly empty apartment blocks in the Madrid satellite town of Sesena in February. Banks are trying to sell billions of euros worth of property left by bankrupt developers. This is attracting bargain-hunting investors from abroad. Andrea Comas/Reuters/Landov hide caption

Back in the day, Madrid's Palace Hotel was Ernest Hemingway's old haunt, or at least the bar was. Now, rooms at the posh hotel just down from the famed Prado Museum go for up to $6,000 a night. And gathering in its lobby these days? An altogether different type of foreigner: the kind in expensive suits.

There's a lot of cash around the world, he says, and a lot of people looking for bargains.

And there are good deals galore in Spain, where the banks are drowning in debt left over from the housing crash. Now, with the help of up to $125 billion in loans from Europe, Spain is overhauling its entire banking system.

You are now getting a better deal than any time over the past 10 years in Spain.

And part of that process involves investors nicknamed "vultures" — the expensive suits — who feed off vulnerable economies.

One of the conditions of Spain's bailout is that banks get rid of their toxic assets — things like unpaid mortgages, devalued property or shares in struggling companies.

Banks need to sell those assets quick — even at a loss — to wipe their slates clean.

So in swoop the "vultures," who often are some of the wealthiest investors in the world.

"Spain's a great place. It's a great country; it's got a lot of problems; it's got too much debt. But what an opportunity," Donald Trump, the real estate mogul, said on CNBC last month. "Talking about all those empty homes and apartments, and they're probably selling for nothing."

Rich investors have been hounding people like José Enrique Concejo, a local investment banker who serves as a go-between for vultures seeking deals in Spain. And what kind of deals are on offer?

Curtain Could Fall On A Dazzling Arts Center In Spain

It all depends, he says. Land alone is selling at an 80 to 95 percent discount; finished housing, 30 to 40 percent.

"But in any case, you are now getting a better deal than any time over the past 10 years in Spain," Concejo says.

Spanish banks are essentially holding a massive garage sale. The government hasn't stepped in to officially launch or regulate the process yet. But Concejo says he's already facilitating deals — and that the best bargains are often the first ones.

"You may actually miss out on relatively smaller or less publicly known opportunities, if you wait," he says. "So some of the large opportunities will be formally auctioned, and will be known. But if you're interested in getting a small portfolio from a particular entity, you may not know about it unless you start talking to people locally."

That's what it means to be a vulture. You dive in to get early deals, before the ink is dry on any official bank restructuring rules. Those are expected to be signed later this month.

It could be left up to Spanish banks themselves to sell off their bad assets and keep the good ones. But another option appears to be gaining steam: the creation of a so-called bad bank.

"Which is a bad name, because it's not a bank, and it's not bad, necessarily," Concejo says.

He says it's more like a state holding company that sells off assets for all the banks.

There is one country that's been through this already: Ireland. The "bad bank" setup there has been slow to sell off assets, but at least the process has been transparent, says economist Philip Lane of Trinity College Dublin. He fears that in Spain, without such a central entity, the process could be vulnerable to corruption.

"You can imagine some shady investor trying to make a side deal, or a secret deal, to pay a price that's below the market price and share the difference with, say, some manager in some bank or whatever," he says.

Lane acknowledges that the term "vulture" connotes some sinister intentions.

"A lot of them are ... motivated by finding the best deal they can find. But that's OK," he says. "A market has a buyer and a seller, and you do expand the pool of sellers by being open to international investors, including U.S. vulture funds and so on."

Back in the luxurious Palace Hotel lobby, the vultures are circling; they smell bargains. The challenge for Spain will be to strike a balance between courting the vultures, and being eaten alive.