Accessibility links
Kitchen Window: Making The Case For Beets This vegetable suffers all sorts of indignities. People say beets taste like metal, mud, wood — even dirty socks (that's hard-core beet hate). But despite their detractors, beets are experiencing a culinary heyday. Try them in soup, salad, rice or even a smoothie. 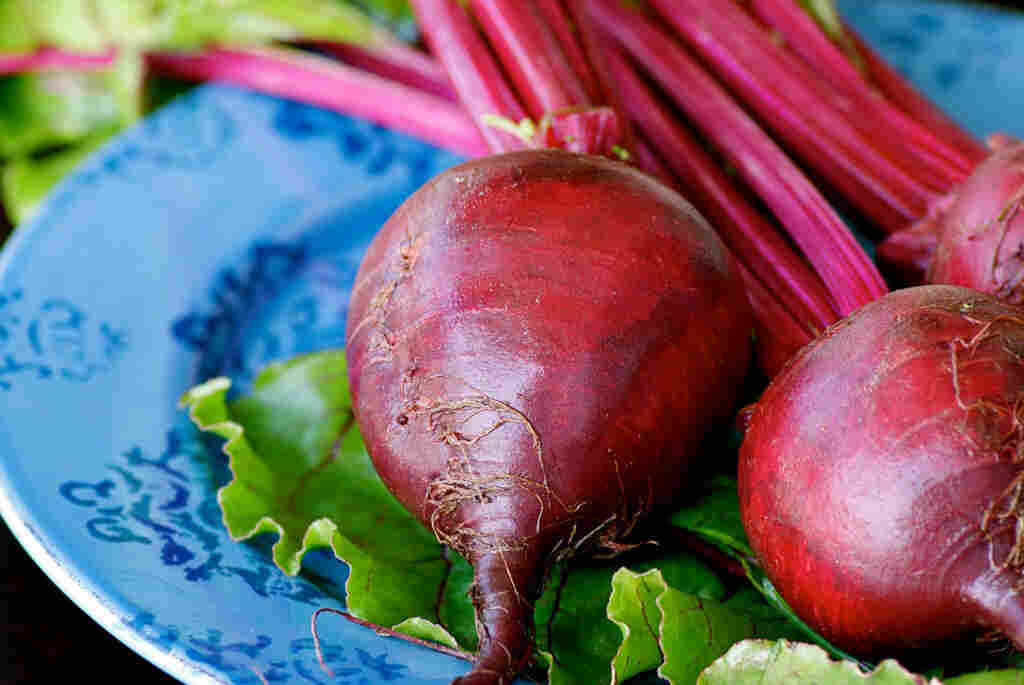 Two years ago, cilantro haters were vindicated. The New York Times ran a story, Cilantro Haters, It's Not Your Fault, in which Harold McGee, respected food scientist and author, explained why cilantro really does taste like soap to many people. Turns out, some folks "may be genetically predisposed to dislike cilantro."

What's behind all this beet antipathy? Is it chemistry? Genetics? Canned beets? President Obama? (He famously banned them from the White House garden.)

Unlike the president, I adore fresh beets, which are at their sweetest from May through September. Some beets, especially dark red ones, have a sweetness close to sugar, while others admittedly taste a little like dirt, or as beet lovers prefer, "earthy."

I've given some thought to this beet bashing, and here's what I've come up with: canned beets. Other than canned string beans, it's hard to find a more repugnant vegetable — freakishly iridescent and disturbingly mushy. Nothing good comes from canned beets.

Many people claim beets taste metallic. This could be because of the metal can, which studies have shown tastes like metal. But that doesn't explain why many people say fresh beets taste like metal. Perhaps it's iron. Beets are high in iron, which is why they're recommended for people with anemia.

Then there's dirt. Maybe they taste like dirt because they have not been properly cleaned and still have dirt clinging to them. Dirt tastes like dirt. Or it could be geosmin, a compound that gives beets their distinctive, dirtlike flavor.

Irwin Goldman, a beet breeder and professor of horticulture at the University of Wisconsin, is trying to help with the beet-dirt issue. He's working to breed beets higher in geosmin for people who like that distinctive dirty flavor, as well as beets lower in geosmin for those who prefer more sweetness.

In spite of their detractors, beets are experiencing a culinary heyday. Innovative food bloggers, writers and chefs are sharing recipes for raw beet salads, beet carpaccio and beet tarts. Beet confections have blossomed as well, especially mysteriously dark chocolate-beet cake, cupcakes and brownies. There's even beet ice cream, on which the jury is still out.

Chefs are smitten with diminutive, jewel-colored baby beets as well as full-sized gold beets with their sun-soaked yellow flesh. Is there a hip eatery that does not serve a roasted beet and goat cheese salad?

Nothing has elevated beets' status as powerfully as Chioggia beets, also known as candy-stripe or candy-cane beets due to their festive red and white striations. When they appear at my local farmers market, they cause traffic jams.

Nothing has elevated beets' status as powerfully as Chioggia beets, also known as candy-stripe or candy-cane beets due to their festive red and white striations. When they appear at my local farmers market, they cause traffic jams. (Keep in mind that cooking diminishes their color, so for the most dramatic presentation, serve Chioggia beets raw.)

When selecting beets, look for deeply colored, smooth, firm-skinned globes with the leaves attached. Avoid beets that are soft, shriveled, pitted or spotted. If storing, cut off the leaves, and trim the stems to about 1 inch. Wrap in paper towel, place inside a plastic bag, and refrigerate for seven to 10 days.

When you're ready to eat them, wash beets thoroughly, scrubbing the skin to dislodge any dirt, then cut off the stem. You can boil, steam, microwave and even grill beets, yet roasting is the kindest cooking method, as the heat gently caramelizes the vegetable's natural sugars. Plus, the skins practically slide off after roasting. Of course, you can also enjoy beets in all their raw glory. Grated, shaved or sliced paper-thin, they're bursting with color and crunch. 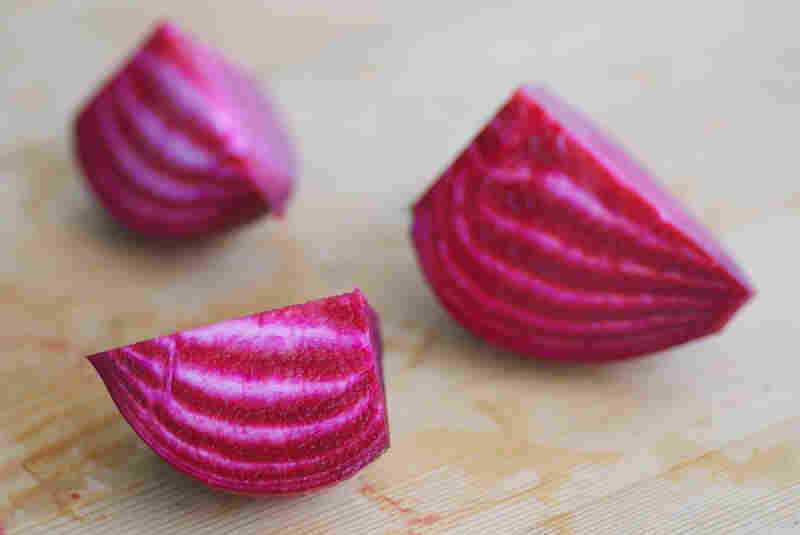 The red and white striations of the Chioggia, or candy cane, beet. Susan Russo for NPR hide caption 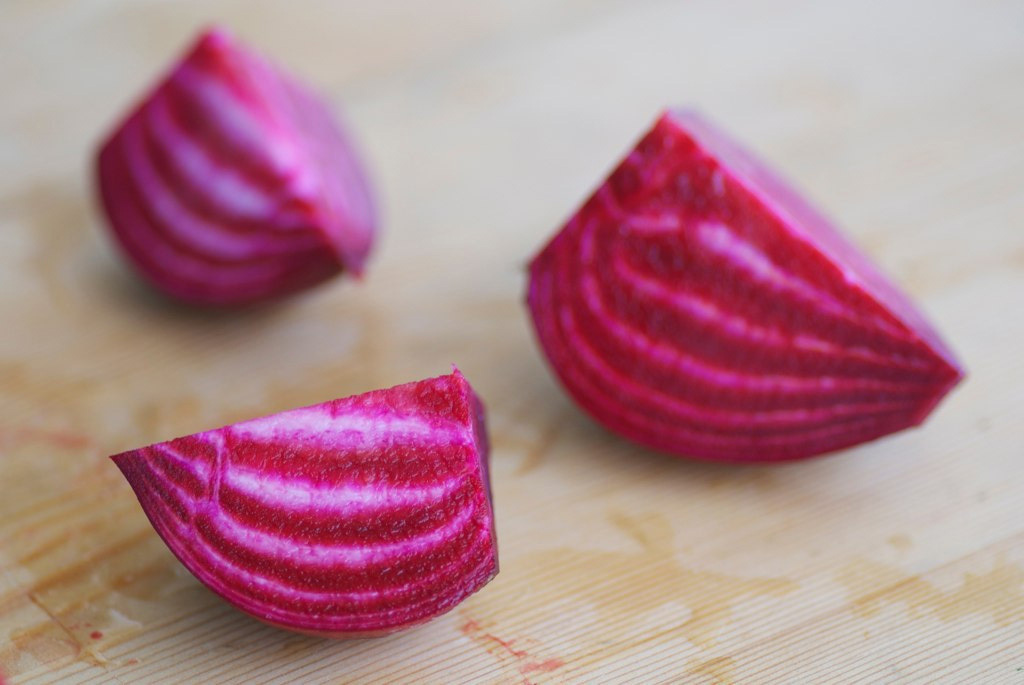 The red and white striations of the Chioggia, or candy cane, beet.

As for the beet greens, whatever you do, don't throw them away unless they're mildewed, browned or full of holes. Fresh beet greens should be unwilted and richly colored. They're similar in taste to Swiss chard and are a delicious alternative to more prosaic spinach.

To prepare them, cut off any thick stalks. Submerge in a large bowl of water to loosen the dirt. Drain, rinse and repeat as necessary, then pat dry. Par-boil them by dropping in boiling water for one minute. Remove and plunge into a bowl of ice water. "Shocking" the greens will keep them bright and beautiful. Drain, and store in an air-tight container in the refrigerator for up to three days. Beet greens are wonderful simply sauteed in olive oil and garlic, tossed into scrambled eggs and pasta or added to soups and stews. They're also delicious raw, thinly sliced and added to salads and sandwiches.

As for flavor pairings, beets have an affinity for tangy, pungent foods such as goat, blue and feta cheeses, sour cream, yogurt, horseradish and onions; acidic foods such as oranges, lemons and vinegars; and smoky foods such as bacon, smoked fish and smoked meats. They also pair well with legumes, especially lentils; whole grains such as barley, bulgur and quinoa; and most nuts, particularly pistachios and walnuts.

If you have a tenuous relationship with beets, consider starting simply. Roasted beets sprinkled with good olive oil, salt, black pepper and fresh herbs such as rosemary or thyme are one of the tastiest ways to enjoy beets. So, too, is crostini topped with goat cheese, sliced roasted beets, lemon juice, sea salt and olive oil. Crunchy raw beet salads are an attractive option as well, especially when tossed with shredded carrots, apples, raisins and walnuts and coated with a creamy tahini or yogurt dressing.

I hope folks like Irwin Goldman and Harold McGee shed some light on this dirty issue soon because clearly it's not on President Obama's agenda. While I wait, I'll be slurping my beet smoothies, spooning my beet soup and crunching my beet chips with abandon.

This stunning salad is ideal for summertime alfresco dining and dinner parties. Enjoy it on its own as a light meal, or serve alongside grilled fish or meat. 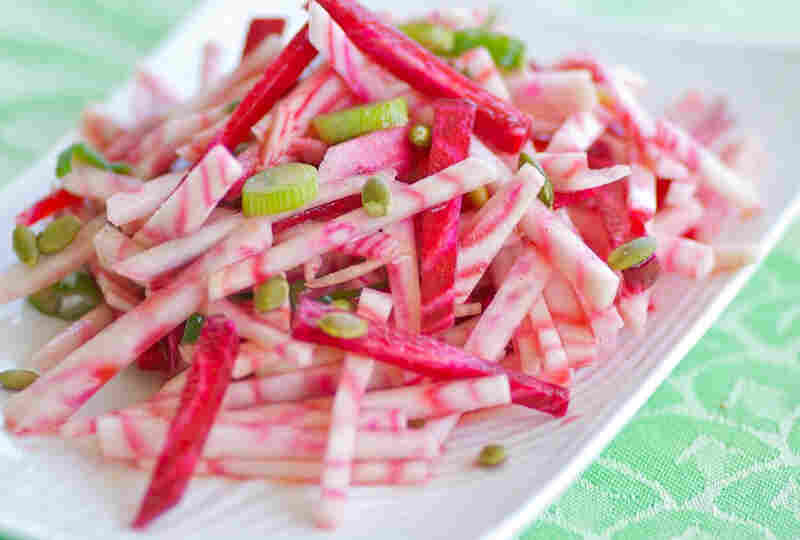 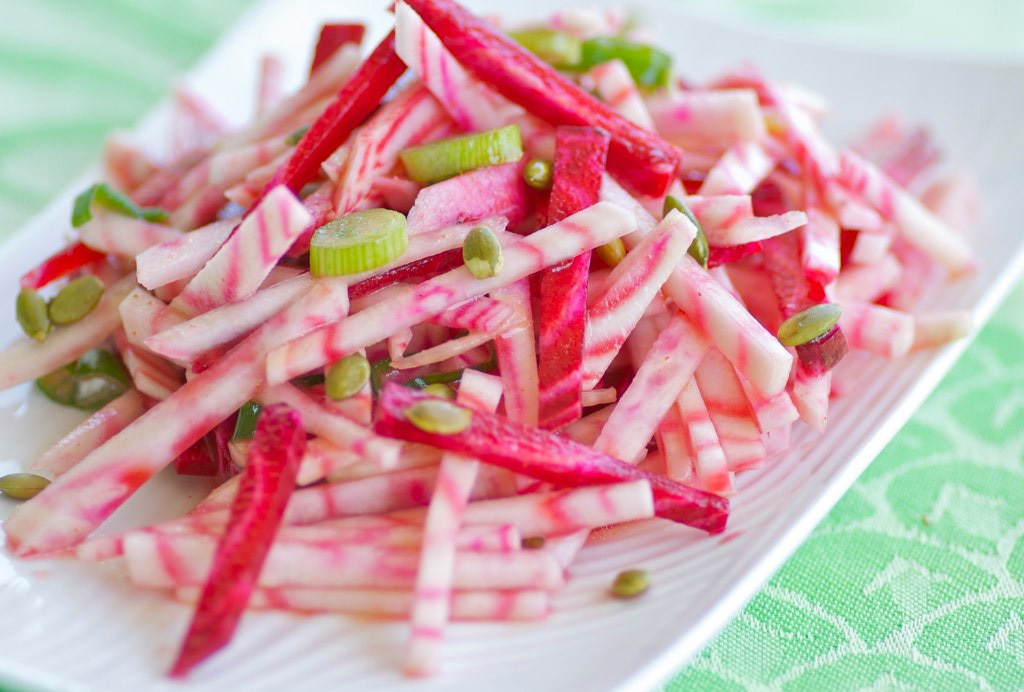 4 medium Chioggia beets, washed, peeled and cut into matchsticks (about 1 1/4 to 1 1/2 pounds), or another beet variety if Chioggia isn't available

Whisk all vinaigrette ingredients in a small bowl and set aside.

Wash and peel beets. (You may want to wear gloves, as the beets may stain your hands.) Using a sharp knife, cut into matchsticks. Place beets in small bowl. Add scallions, cilantro and pepitas, and toss. Add vinaigrette and toss until well coated. Serve at room temperature.

* Available at most major supermarkets and Mexican specialty markets

In this recipe, the beets stain the rice red, hence the name. It's perfect for picnics and summer cookouts and also makes a satisfying vegetarian entree. 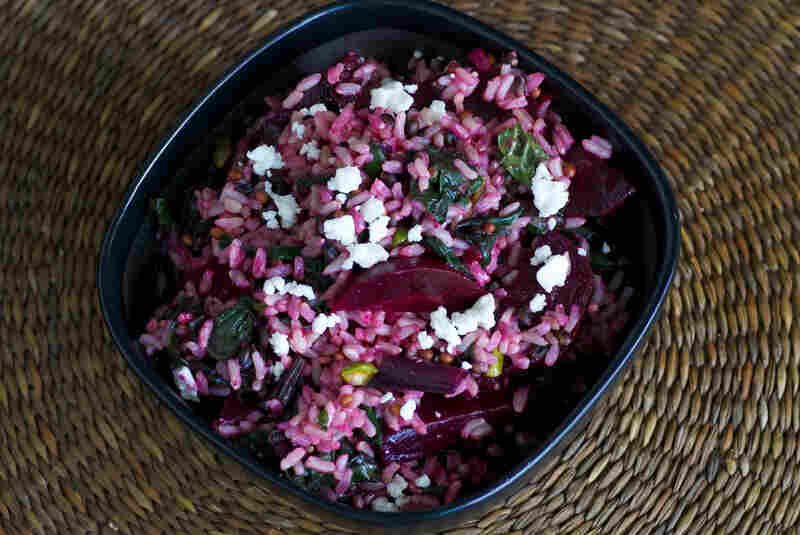 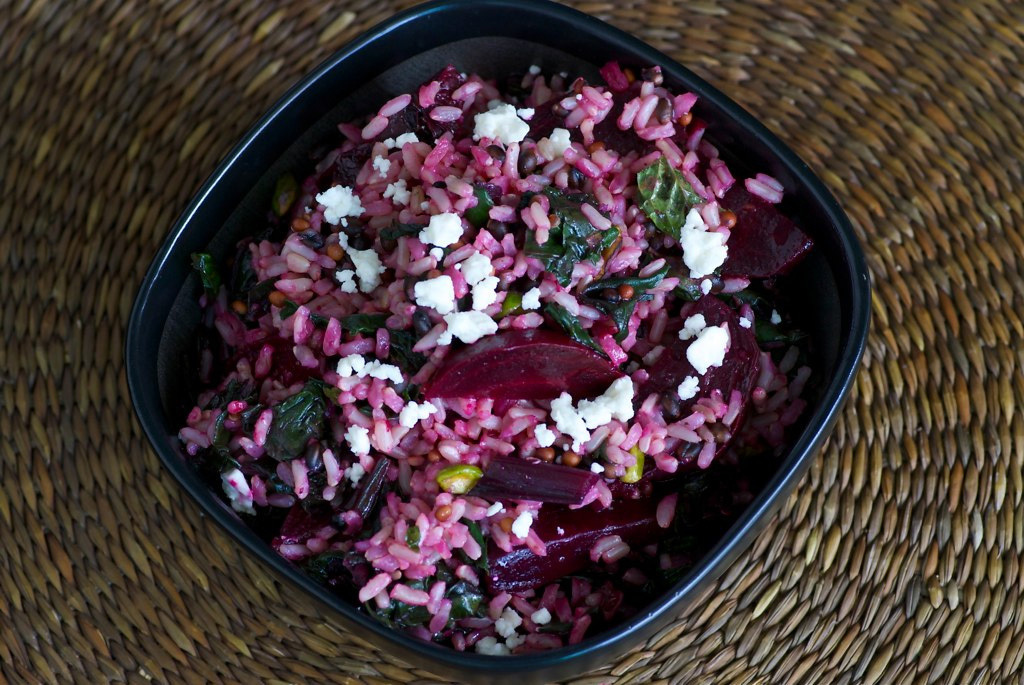 In a medium pot, bring rice and 2 1/2 cups of water to a boil. Reduce, partially cover and simmer for 25 to 30 minutes, or until the water is absorbed and the rice is firm yet cooked through.

Place a large skillet over medium-high heat. Add 1 teaspoon olive oil. Add sliced beet greens and saute for 3 to 5 minutes or until softened. Remove from heat.

Preheat oven to 400 degrees. Wash beets. Place on a large piece of aluminum foil, drizzle with olive oil and wrap tightly. Place on a rimmed baking sheet and cook for 50 to 60 minutes, or until tender when pierced with a knife. Remove from oven and cool. Rub off the skins and cut into small pieces.

To make the dressing, whisk all ingredients in a small bowl and set aside.

To assemble the salad, transfer the rice to a serving bowl. Add the cooked beets, greens and dressing. Toss lightly. Sprinkle with crumbed feta cheese and pistachios and garnish with thinly sliced fresh mint.

Borscht and I have never gotten along, but I've become good friends with this cheerful soup. The fresh ginger adds brightness, while the cayenne pepper packs some heat. Though delicious right away, this soup tastes even better the next day. You could serve it cold or at room temperature, but its flavors are fullest when heated through. 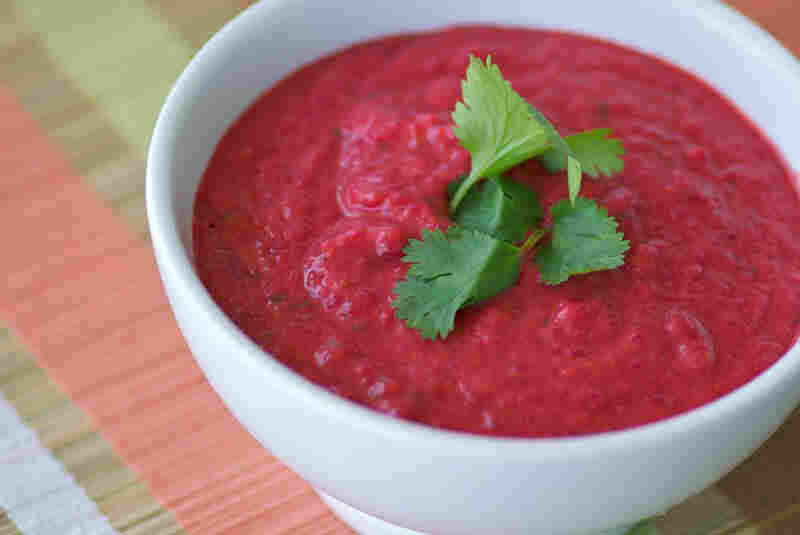 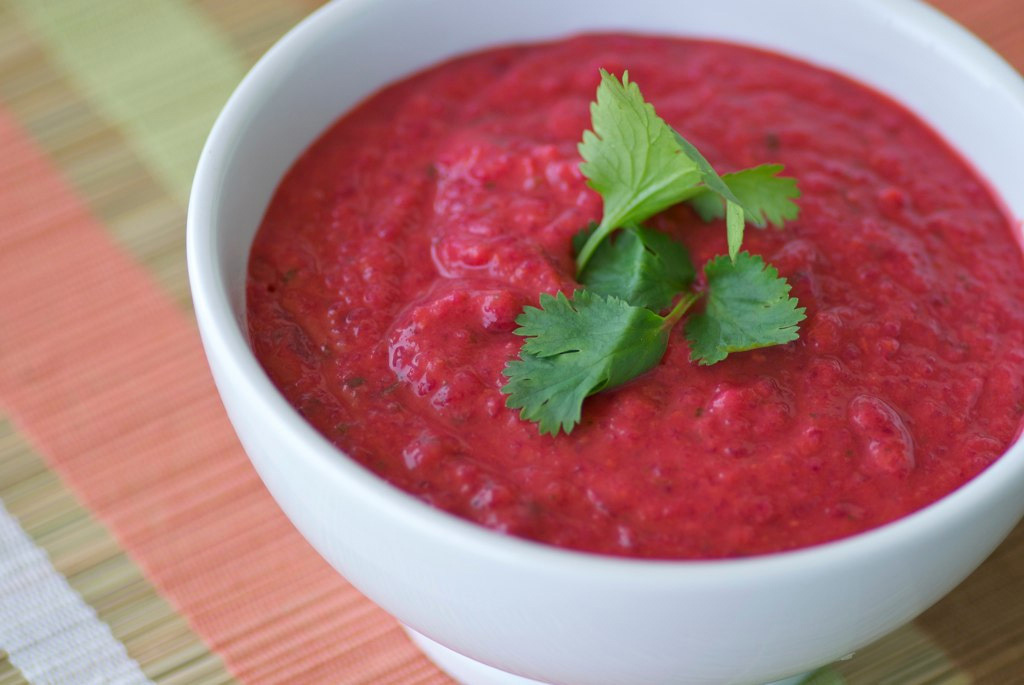 1 large sweet potato, peeled and cut into chunks (about 1 pound)

Preheat oven to 375 degrees. Wash and peel the beets and sweet potato, and cut into 1-inch pieces. (You may want to wear gloves, as the beets may stain your hands.) Place beets and sweet potato on a large rimmed baking sheet. Drizzle with 1 1/2 tablespoons olive oil, salt and black pepper. Roast for 25 to 30 minutes or until lightly browned and tender when pierced with a knife. Remove from oven and set aside.

In a large pot over medium-high heat, add remaining 1 tablespoon olive oil. Add onions and celery and saute 5 to 7 minutes, until softened and lightly browned. Transfer the cooked beets and potato to the pot. Add the broth, lime juice, ginger, cilantro and cayenne pepper and stir well. Cook for 10 minutes. Cool for 10 minutes before pureeing. Working in batches, add soup and coconut milk to a blender and puree until smooth. For a velvety smooth consistency, you can strain the soup through a sieve. I like a few tiny bumps, so I leave it as is. Season with salt and pepper to taste.

This ruby red breakfast smoothie is as healthy as it is eye-catching. You may even get your kids to drink it. 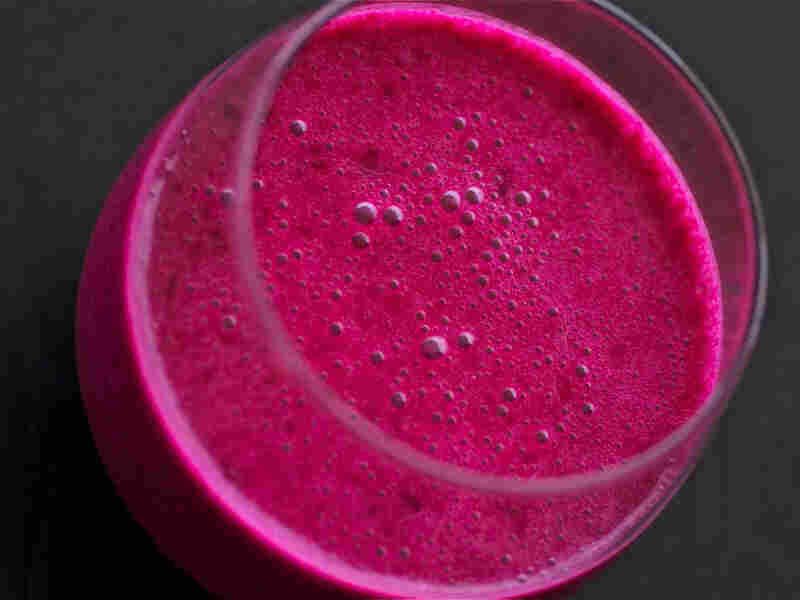 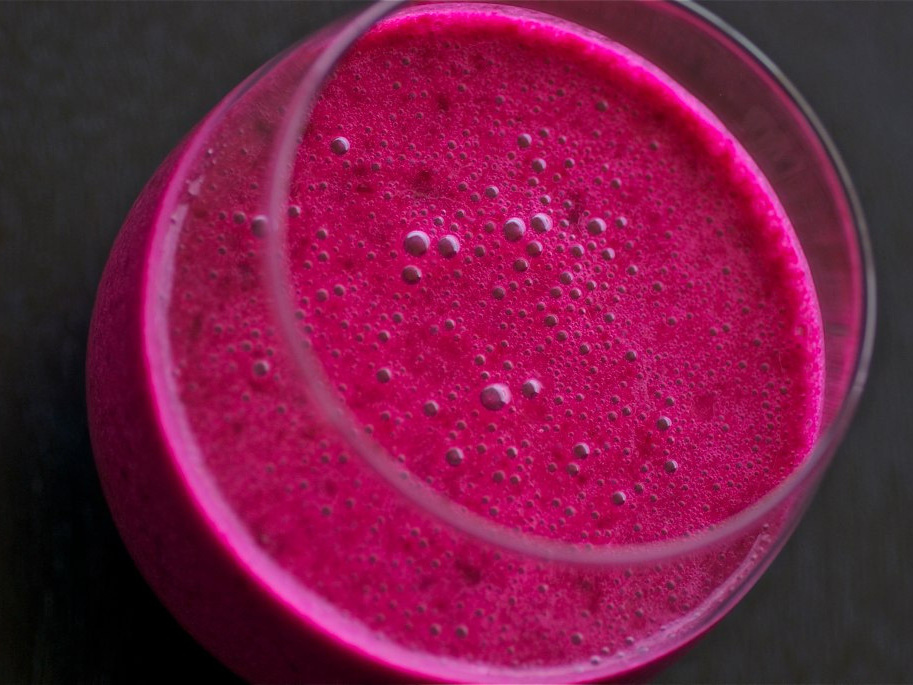 1 to 1 1/4 cup milk of your choice, such as almond, soy or low-fat milk, depending on how thick you prefer it

Mix all ingredients in a blender and puree until smooth. Pour and enjoy.