Accessibility links
Korean Families Chase Their Dreams In The U.S. A public school in Los Angeles has become a magnet for Korean families who want their kids to learn English while escaping the intense rigor of the Korean school system. In the U.S., they move from school district to school district, cherry-picking the best schools as their kids rise through the grades. 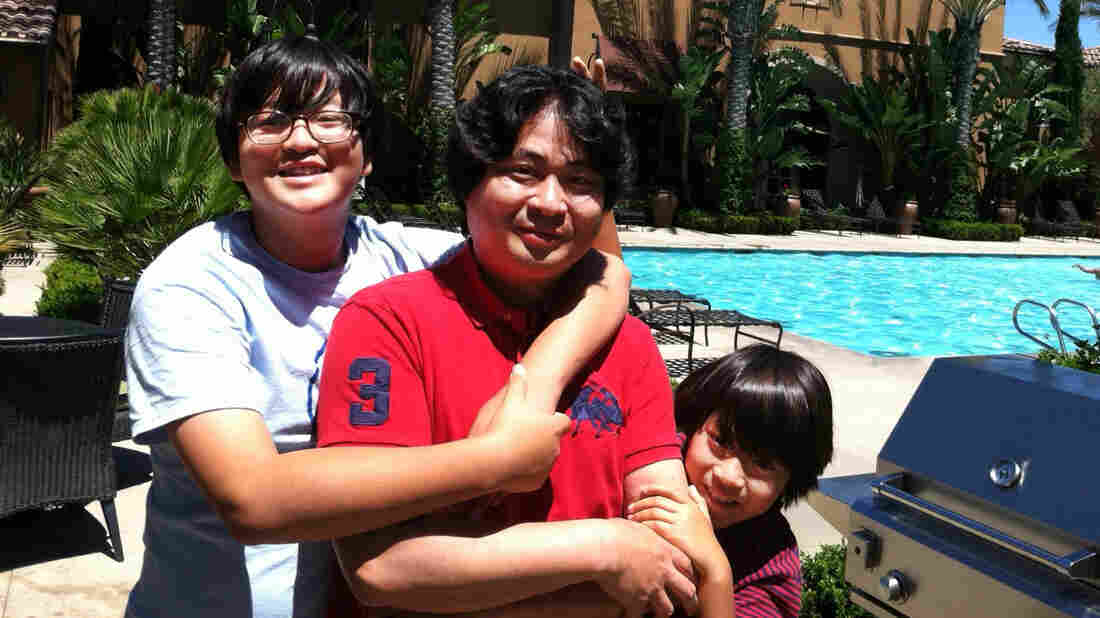 Eleven-year-old Woosuk Kim sees his mother only three or four times a year. That's because he's part of what Koreans call a "goose family": a family that migrates in search of English-language schooling.

A goose family, Woosuk explains, means "parents — mom and dad — have to be separate for the kids' education."

Woosuk's father brought him and his little brother to America two years ago to attend Hancock Park Elementary, a public school in Los Angeles. The boys' mother stayed in South Korea to keep working.

Woosuk's family is unusual. In most cases, it's the father who stays behind. "Goose fathers" are even a fixture of South Korean TV dramas, usually appearing as lonely drudges, working nonstop to support their families abroad.

Goose families prefer to migrate to English-speaking countries. New Zealand and Australia are popular, but the United States is especially prized. And in the U.S., one of the favorite "port of entry" schools is Hancock Park.

"I would say that we have a very significant Korean population," says Principal Ashley Parker. "They start first grade, second grade — we have new fifth-graders coming from Korea."

A generation ago, Hancock Park was predominantly Jewish. Now it's 37 percent ethnic Korean. The school doesn't track the students' citizenship, so it's impossible to know how many are Korean nationals; but they've become a significant population in this school.

Hyungsoo Kim, on why he's brought his children to the U.S. for an education

"From Korean families, I probably get three to four emails every month. And just this week, I've had four, because over the summer is when most of the families come," Cooper says.

Some of the Koreans come because a parent has found a job in Los Angeles. But when just a mother arrives with her children, they're usually here for the school. Jihyun Lee brought her children over last year.

"[My husband] wanted [our kids] to come to a more globalized place, so that their minds become more globalized, larger," Lee says through a translator.

Lee says her kids are here not only to learn English, but also to gain a special edge when they go back home. Lee's Korean-American friend, Diana Park, explains that having lived in America carries significant status.

"If you do not have the American experience and you live in Korea, it's not the same as people who've been here," Park says. "They treat you differently in Korea if you say you've been in America."

And there's something else: Many of these goose parents — including Lee — say they're also here to get away from Korean schools.

"Although the academics in Korea are more rigorous, there's no creative mind there," says Park, translating for Lee. "Everything's rote memorization, and it's purely academic — there's no individual thought in their teaching."

Goose family migration combines educational ambition with a desire for leisure. To be blunt, for these Korean kids, American schools represent a chance to relax a little. When Lee asked her kids what they liked about their first year in an American school, the first thing they said was "recess."

"Apparently they don't have recess in Korea," Park adds. "They get time to eat and that's it, and then I think right after school they go to another after-school program. So they don't really get any recess or any time to play."

The American parents at the school are proud of its above-average standardized test scores, so it can be a little disconcerting to hear that the Korean kids see it as a place to kick back.

Shari Cooper says she considers the Koreans to be a salutary academic challenge for her own kids, and she says relations with the Korean families are generally good.

In Tough Times, Some Tension

Still, given the painful budget cuts in Los Angeles public schools, there has also been some grumbling.

"They were feeling like, wait a second, you know, why are these families driving up in these expensive cars and dressing so well — they should be giving to the school,' " Cooper says. "So there was a little bit of animosity. You felt it at the meetings; you didn't feel it on the playground so much."

Cooper says the booster club has done a better job of getting Korean parents to donate to the fund drive, and tensions have eased. Now, when she gets emails from South Korea inquiring about tuition at Hancock Park, she says she answers that it's a free public school — but that fund drive donations are appreciated.

In some other countries, like New Zealand, goose families are charged to attend public schools. Cooper says she wouldn't want to see that in the U.S.

"It doesn't sound like a very American way to go," she says. "It's a free country with a free public education, and if you start charging people, they're going to start feeling more like visitors. They're not going to be invested in the school and the country in the same way."

Migrating From School To School

But while the goose families may feel invested in Hancock Park, they don't seem to feel the same dedication to the larger Los Angeles public school system. Once their kids finish elementary school, they tend to move on.

"Schools in L.A. [are] very terrible now," says Hyungsoo Kim, Woosuk's "goose father." As soon as Woosuk finished fifth grade, he moved the boys to a new gated community in Orange County so they could be close to good middle schools.

"There's many families from Hancock Park [that have moved] to Irvine. Yeah, to our neighborhood," he says.

In fact, goose families tend to follow a kind of wagon trail of American public education, moving from district to district as their kids age through the system. That journey often culminates on one of the campuses of the University of California.

Sitting by the pool outside their new Orange County apartment, Hyungsoo Kim says he's pleased America has given his boys the chance to relax.

His sons agree. Back home, they say, Korean kids are now suffering through a pile of summer vacation homework. Here in America, there's little danger of that.