Accessibility links
Spanish Families Share Expenses And Tradition Multi-generational families living in the same household in Spain is nothing new. But as a quarter of Spanish workers are out of work, and half of its young adults are struggling to find a job, relatives can rely on one earner, with government assistance, to get by the country's economic woes. 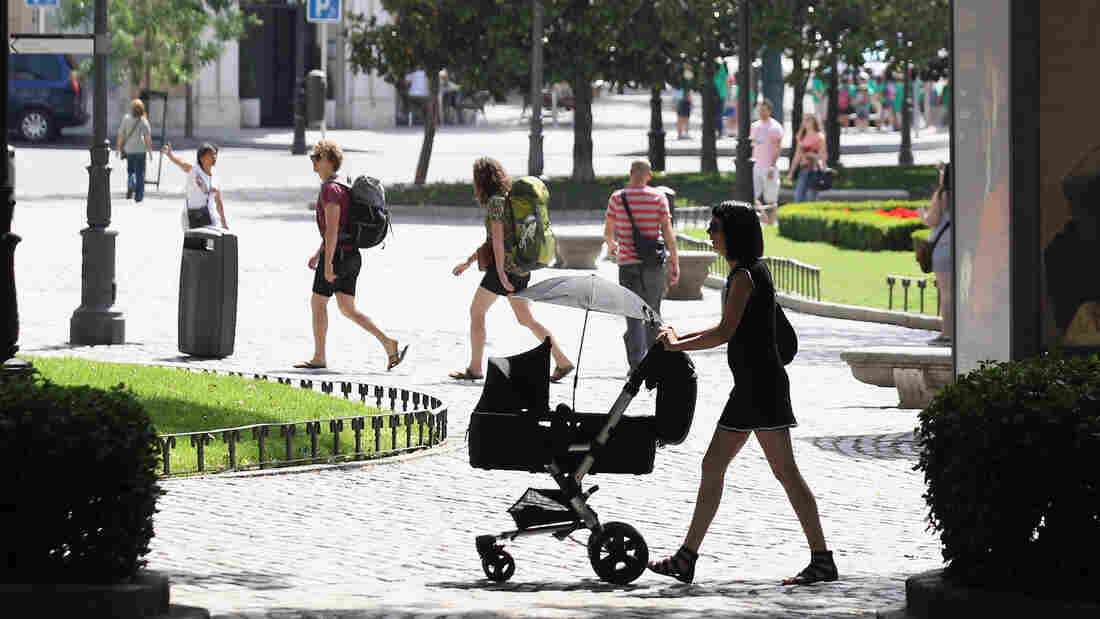 A woman pushes a pram though the Plaza de Murillo on July 3 in Madrid. Spain's custom for multiple families to live under the same roof has tied them closer together as well as their wallets. The country has the highest unemployment rate in the Eurozone, and government benefits help aid those out of work. Oli Scarff/Getty Images hide caption 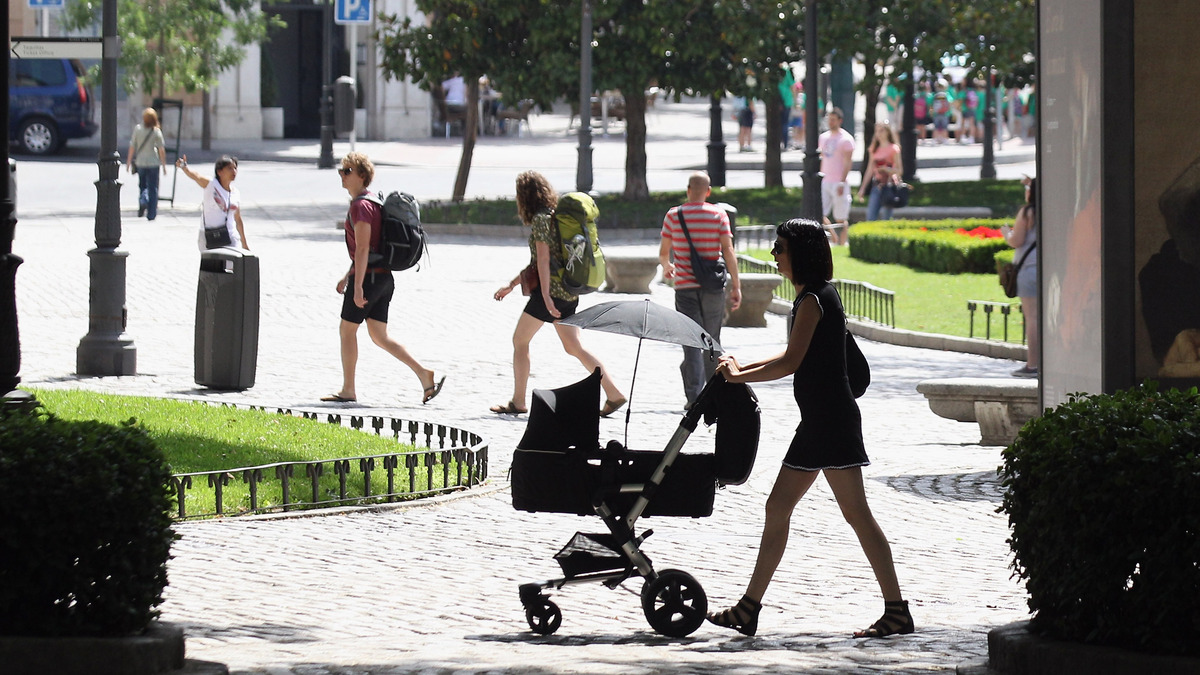 A woman pushes a pram though the Plaza de Murillo on July 3 in Madrid. Spain's custom for multiple families to live under the same roof has tied them closer together as well as their wallets. The country has the highest unemployment rate in the Eurozone, and government benefits help aid those out of work.

What used to be a Spanish tradition is now becoming more of an economic necessity.

In Spain, the social safety net that helps people survive the economic crisis has two parts: government benefits and close family ties. The country has the highest rate in Europe of multi-generational families all living together.

With a quarter of Spaniards out of work, more parents pick up their kids from school themselves, in the middle of what would have been a workday.

Fathers like José Ramón Fernandez, retrieving 9-year-old María Carmen, one of his five kids. Walking up to the school, he explains how he lost his construction job a year ago.

"Construction used to fuel this country, but it's gone, along with my job," Fernandez says. "After work we all used to go for a beer. Without customers, the bar with five employees had to lay off two of them. That's how the crisis spreads."

José's wife, Tania Maroto, is pushing a stroller with her 5-month-old, and also a wheelchair. Tania hasn't worked in 15 years since their eldest daughter Bella was born with a neurological disorder.

"I have five kids, and my daughter is disabled, so it's virtually impossible for me to work outside the home," Tania says.

And thanks to government aid, she doesn't have to. The state recognizes that Tania is the primary caregiver for her disabled daughter and sends a monthly check for the girl's expenses.

When José lost his job, the family thought they'd have to move to a cheaper apartment. His unemployment check can't cover the rent. But the government stepped in again, taking over their lease. They qualify because of their lack of income and their daughter's disability — they need an elevator. So the state pays their rent and also gives about $700 a month in spending money.

Despite severe budget cuts across Spain, benefits like this are typical, and haven't been cut. Unemployment compounds this family's troubles, but it doesn't leave them on the street.

They certainly don't live in luxury in an 800-square-foot apartment for seven people. Tania's parents are next door, and her father's factory paycheck is the only salary for all nine of them. Without government benefits, Tania says they'd never get by.

"What my father earns should be to cover my parents' needs. Whenever they're able to help me, they do, and I do the same for them," Tania says. "But we'd never arrive at the end of the month with enough money for all of us."

The safety net Tania and José rely on is the heart of Europe's post-war welfare state. There are fears that it's now being chipped away. Seniors will soon have to fork over a small co-pay for medicines. But health care, benefits for the elderly and disabled, plus unemployment are largely untouched in Spain, at least so far.

Another aspect key to Spain's economic survival is the family unit. Like Tania, who lives next door to her parents, it's not uncommon for kids to live with their parents or grandparents well into adulthood — in good times and in bad. Those close family ties help the country cope with 25-percent unemployment, and double that rate for young people, says Gonzalo Garland, an economist at Madrid's IE Business School.

"Either one member of a family supports, but sometimes even grandparents with their pensions are supporting other families where none have employment" Garland says. "So there's this family network, let's say, that also tends to alleviate to some extent the impact of very high unemployment."

As, José and Tania walk from school to school, picking up one kid after another, they try to count, with a little help from 9-year-old María Carmen, how many of their other relatives have work.

"Right now, the vast majority of us are unemployed," José says.

One salary for nine people is not typical. But it's also not as rare as you might think. Government figures show 1.5 million Spanish households are without a single wage-earner.

That's in a country of about 47 million people. So most Spaniards probably know at least one family that's getting by like this.

With all five kids now in tow, José and Tania lift Bella's wheelchair onto a city bus. The family is heading to a restaurant they've heard is hiring. José goes in to inquire about a kitchen job, but then comes back out dejected.

Turns out it was just a rumor. No jobs here. But José manages to look on the bright side.

"At least I have time for my kids," José says. "I can spend the whole day entertaining them!"