Accessibility links
At 100, Woody Guthrie Still Resonates A massive influence on the likes of Bob Dylan and Pete Seeger, the author of "This Land Is Your Land" — and thousands of other songs — remains an inspiration to musicians nearly 45 years after his death. 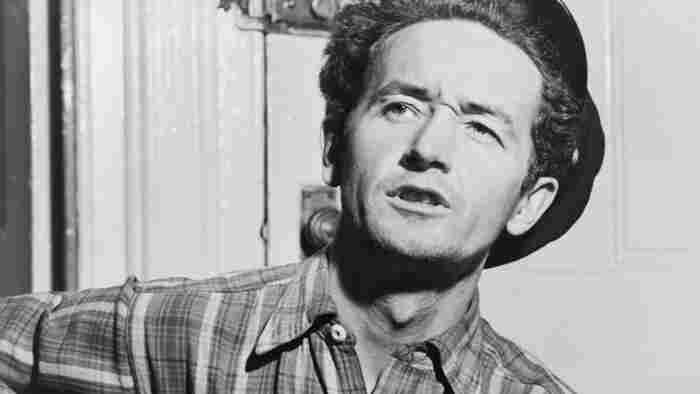 Woody Guthrie would have been 100 years old on Saturday. The singer and songwriter wrote "This Land Is Your Land," among thousands of other songs.

Even though Guthrie died almost 45 years ago, his lyrics and message continue to appeal to new generations of Americans.

Woodrow Wilson Guthrie grew up rough and poor and wild in a family scarred by tragedy. His older sister died in a fire when he was 6. His mother was eventually committed to a mental hospital, where she died when Woody was 18. By then, the Guthries' native Oklahoma was reeling from the one-two punch of the Great Depression and the Dust Bowl of the 1930s — and the westward migration it spawned. 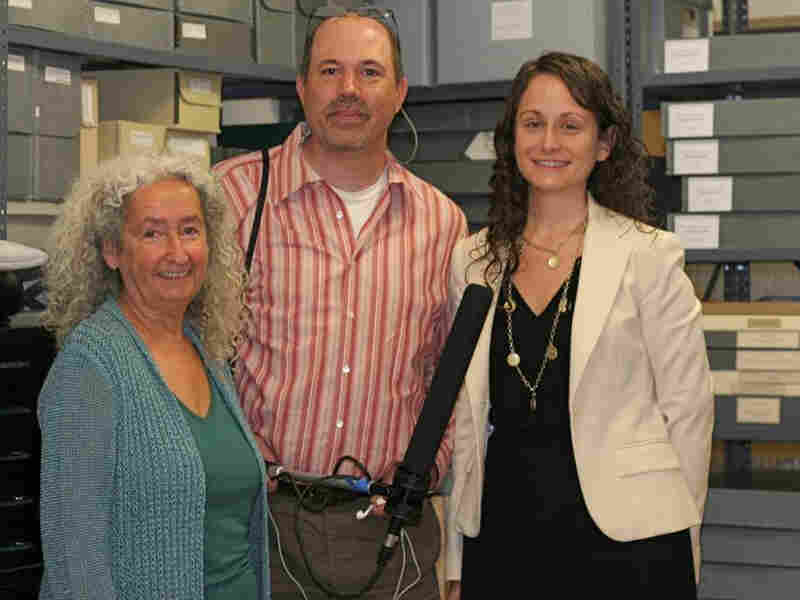 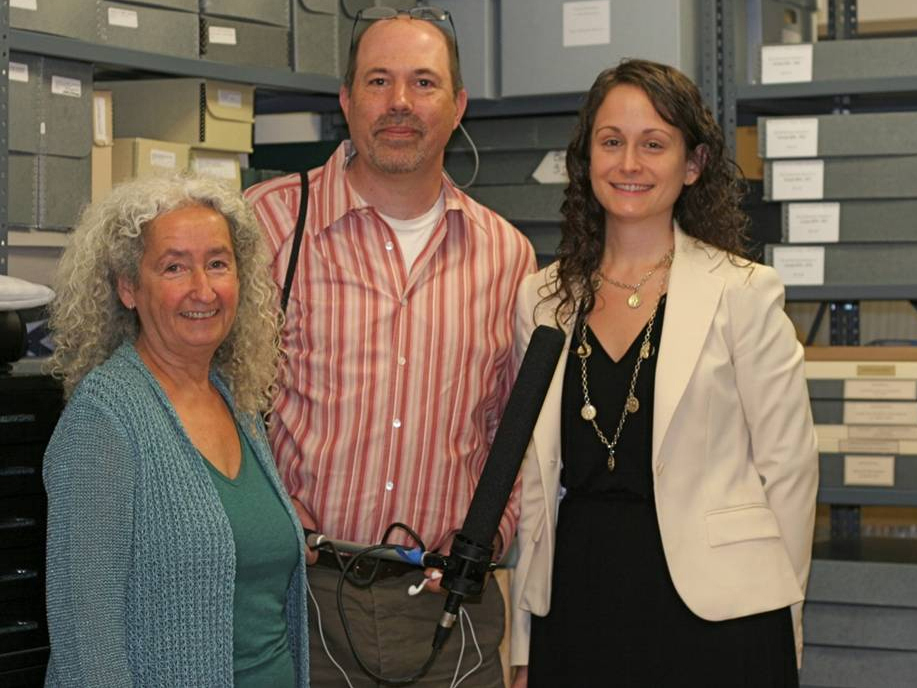 A song Guthrie wrote in 1938, "I Ain't Got No Home in This World Anymore," describes his family's plight:

Joe Klein, a journalist for Time magazine and the author of the political novel Primary Colors, wrote a biography of Woody Guthrie in 1980.

"The further we get away from Woody's birth and death, and take a look at his influence, [the more] it helps us learn about ourselves as Americans," Klein says. "There's a wild-ass quality to this country that he personified. I go around the country. The greatest fear is that we're losing that — we're losing our creativity, our individualism. Woody was an individual, and a militantly individual individual." 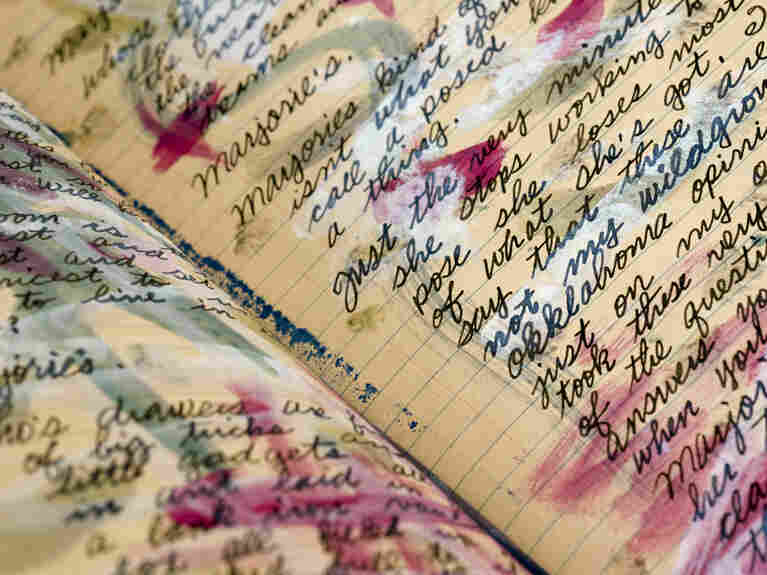 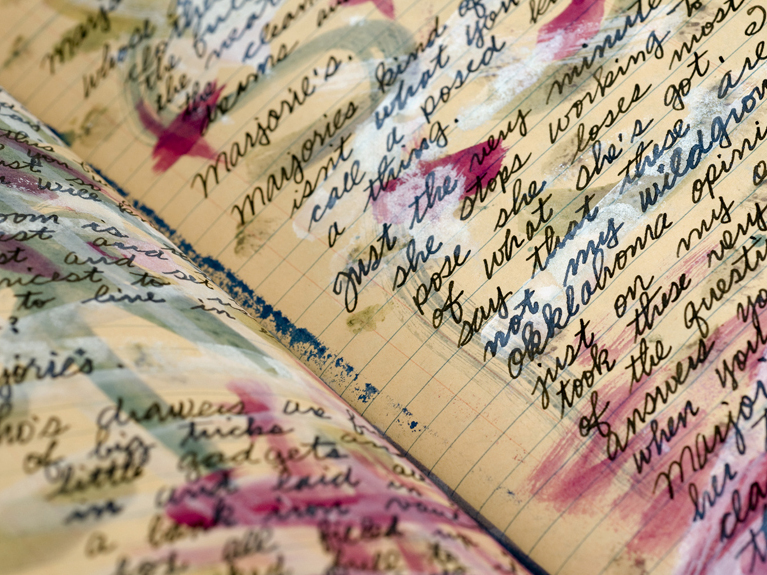 One of Woody Guthrie's notebooks, circa 1942.

Courtesy of the Woody Guthrie Archives

Guthrie blew out of Oklahoma on the winds of the Dust Bowl, along with hundreds of thousands of displaced Americans. He was in his 20s when he landed in the California farmlands. But another Guthrie biographer, Elizabeth Partridge, says Woody just didn't have a knack for farm work.

"Woody was not a physical worker — he was not out in those fields picking like everybody else in California," Partridge says. "But he was the first one to show up and have his guitar and lead a cotton strike. If he could be there doing the music, he was happy."

Guthrie found his place in the world as a troubadour supporting farmworkers and union movements. He was too independent to be a card-carrying communist, but his sympathies were always with the poor and the powerless. His politics veered far to the left.

"Society was also gaining such a strong leftist position, because there were so many people in his same shoes," Partridge says.

Guthrie's songs connected with those people, and he headed east to make his first recordings at the advent of WWII. By 1943, he'd written an autobiography that led The New York Times to call Guthrie a national treasure — "part of the best stuff this country has to show the world."

But Guthrie's politics stayed far to the left even as the political climate shifted during the Cold War. For the most part, he wound up playing to small audiences.

As the 1950s turned to the '60s, interest in folk music picked up — and Guthrie's politics resonated once again. Bob Dylan, Ramblin' Jack Elliott and Pete Seeger championed his songs, introducing him to a new generation. But by then, Guthrie's health was failing as a result of Huntington's disease, a neurological disorder he inherited from his mother.

Guthrie's daughter, Nora, has largely written the latest chapter. She runs the Woody Guthrie Foundation, which curates her father's artistic legacy. It's hard to exaggerate the sheer volume of his output. Many thousands of pages of drawings, paintings, writings and lyrics fill floor-to-ceiling shelves. Guthrie seems to have written about every place he ever went to — and every person he ever met.

"He loved writing — he loved it," Nora Guthrie says. "My mother would say, 'He loved the feeling of a pen on paper' — just that visceral experience. He loved that. It was his energy coming out of his fingertips."

Nora Guthrie has opened this archive not only to researchers and biographers, but also to musicians like Jeff Tweedy of the band Wilco. He went there and held the battered journal that contains Woody's handwritten lyrics to "This Land Is Your Land."

"I remember it feeling like I was getting to hold the Declaration of Independence," Tweedy says.

But most of the archive is made up of unpublished writings. They reflect the full range of Guthrie's interests.

"He was everything I thought he was, and an enormous amount more," Tweedy says. "I wasn't expecting there to be ribald songs about prostitutes, or Jewish songs. And I was thrilled to have that in there, because that felt like the Woody Guthrie I'd like to imagine or invent if it wasn't real."

Among the songs that Tweedy found in the archive, and later recorded, was one called "California Stars."

"It's on a yellow piece of paper in blue ballpoint," Nora Guthrie says. "He hadn't been to California in 10 years at least. He probably already knew he had Huntington's, and he wished he could go back in time — stop the progress of an illness."

Tweedy says that as he sifted through the archive, he started to a get a sense of the "genuineness" that was part of Woody's appeal in the 1930s — and that still resonates today.

"He was very welcoming. There was this generosity of spirit and openness to experience, experiencing the world and the people of the world, an almost childlike embrace of whatever happens," Tweedy says. "I think that's always going to be inspiring, when you can find someone that has such a gift for being themself."

About 300 of Woody Guthrie's unpublished song lyrics have now been set to music and recorded by a new generation — that's more than he recorded himself in his lifetime. Nora Guthrie says musicians are still finding new material.

"It's been 20 years, and I still haven't read all the lyrics," she says. "Just watching each of the artists turn the pages, I realized what happens is they find themselves in Woody's lyrics. Every artist finds something different."