Accessibility links
In London, U.S. Women's Field Hockey Players Look To Get Back On Podium As one of the world's most popular sports, field hockey produces cultural stars in Argentina, the Netherlands and Australia. The sport is relatively obscure in the United States, but that isn't stopping the women's national team from aiming at its first Olympic medal in the sport in 28 years. 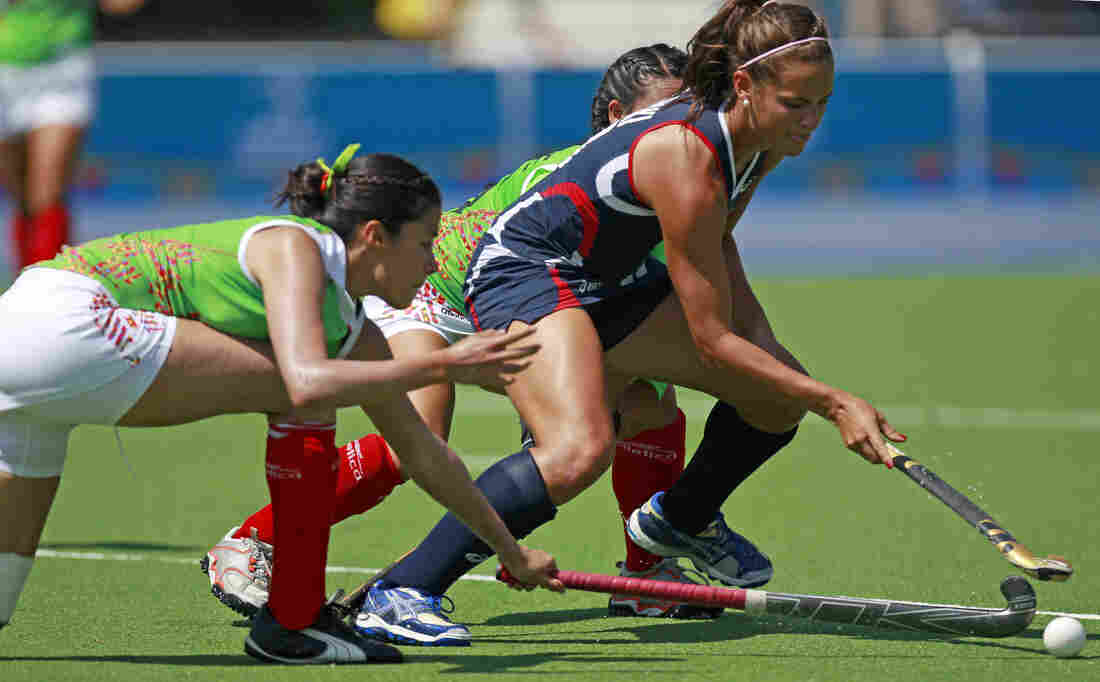 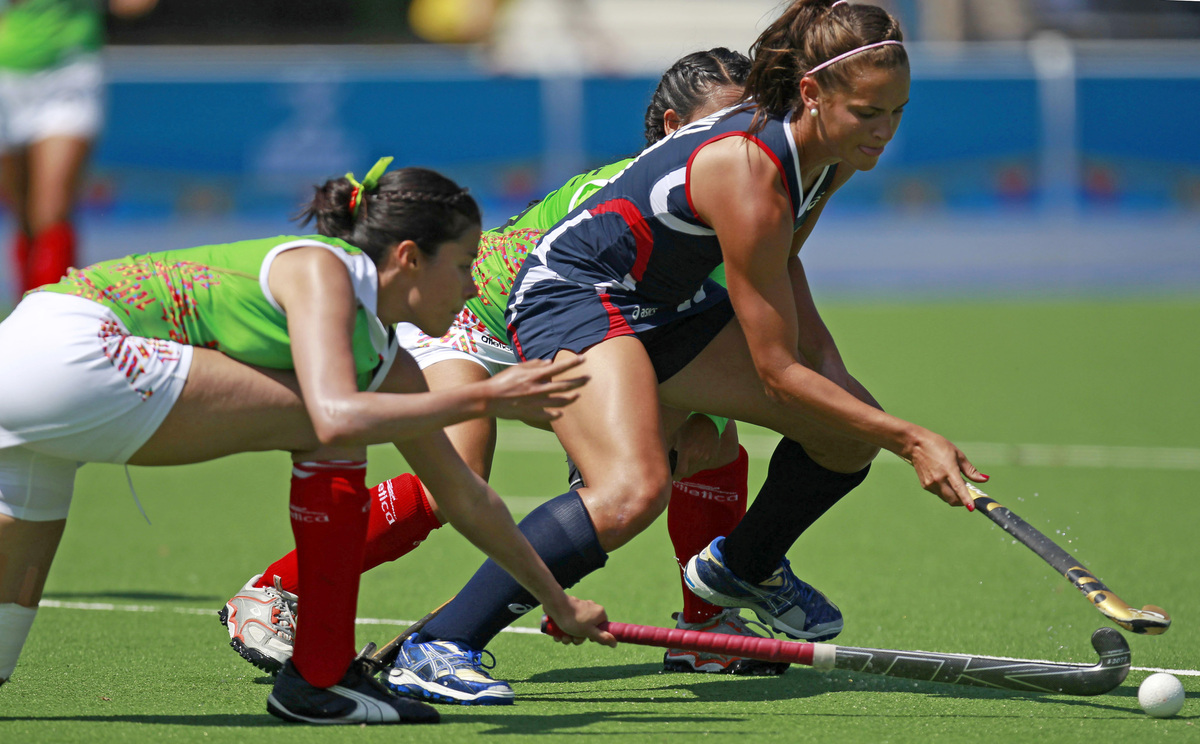 Paige Selenski (right) of the United States fights for the ball against two Mexican opponents in a women's field hockey match at last October's Pan American Games in Mexico.

As one of the world's most popular sports, field hockey produces celebrities in Argentina, the Netherlands and Australia. But the sport is relatively obscure in the United States, where members of the women's national team receive a small monthly stipend and their notoriety comes from outside the country.

Later this month, the group heads to London, where it will try to earn the first American medal in the sport in 28 years.

With a back-and-forth rhythm like basketball and shots on goal that can exceed 100 miles per hour, it's not that hard to understand why field hockey is immensely popular in other parts of the world.

"We're seen as celebrities; we tend to have police escorts to the field," says Claire Laubach, a defender on the U.S. Olympic team who has made several trips to play in South America.

"And we usually stay in the same hotel as the Argentinean team," she says. "Just outside the hotels, they have barricades to keep the people back. It is quite the experience." 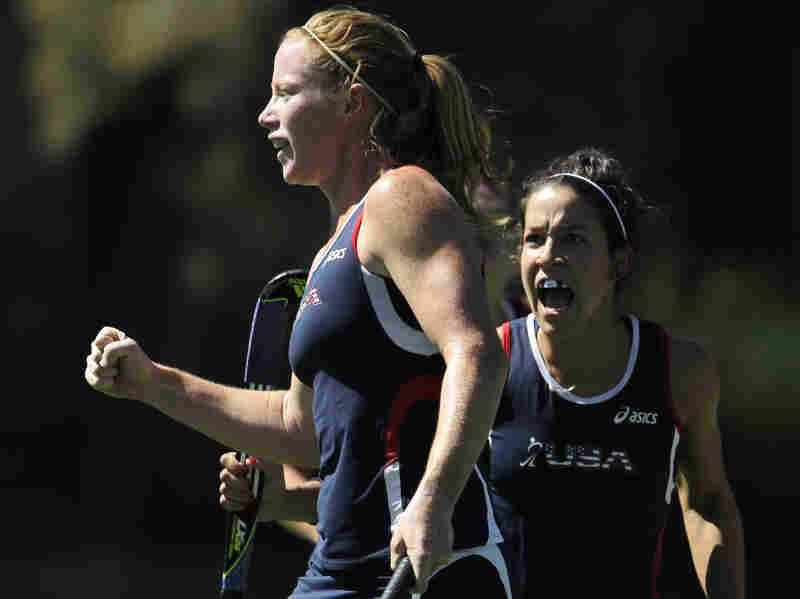 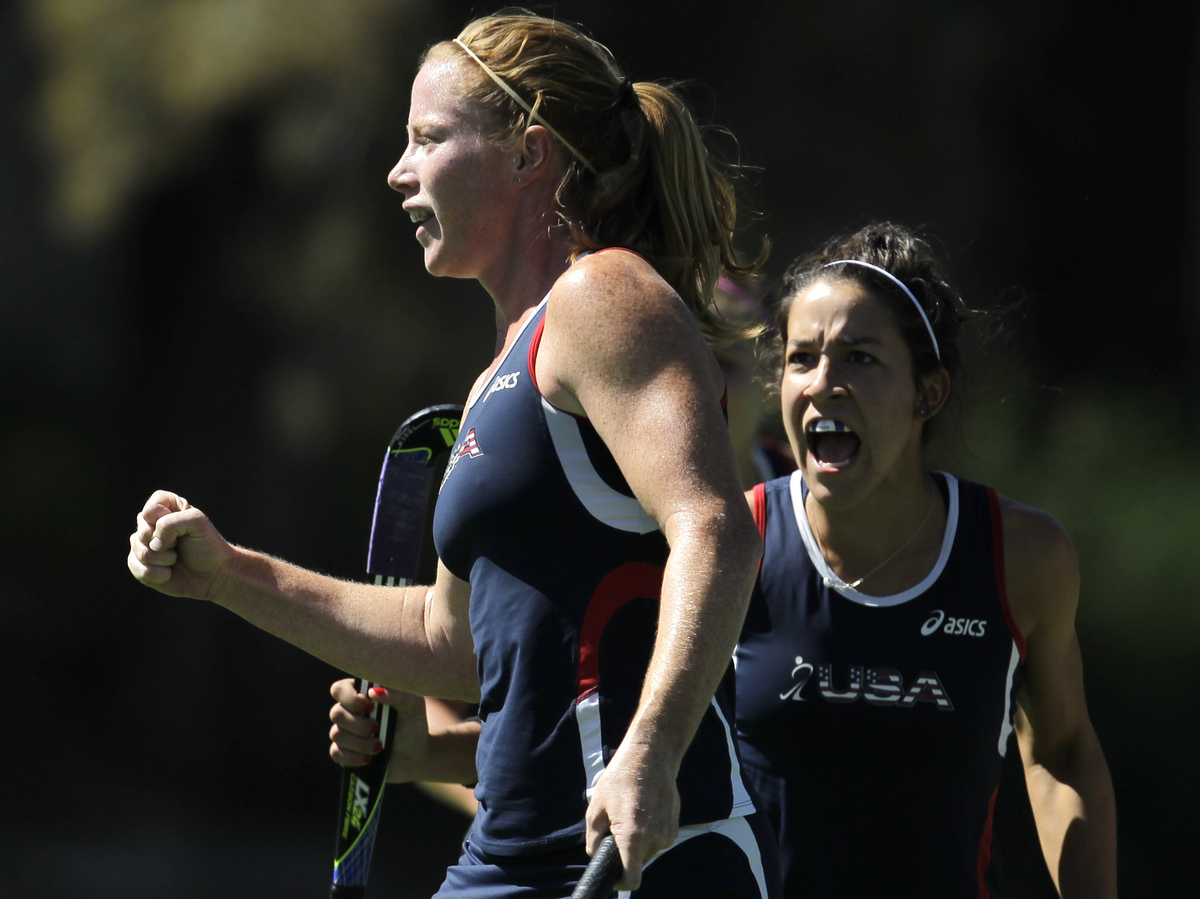 The scene is quite different here in the States.

Last month, the Americans played that same squad from Argentina at an exhibition game in Norfolk, Va. There were no police escorts or barricades at the game, which was sparsely attended despite free admission.

The generally anonymous U.S. team is a tight-knit group. For the past year, they've largely put careers and relationships on hold while training and living together in California. There has been rock-climbing, pumpkin-carving and training with SEALs. Yes, the kind from the military.

Michelle Kasold, a striker for the U.S. squad, recalls that day.

"Basically five straight hours of anything from pushups to crawling on the ground," she says, "to carrying boats, to carrying logs, to anything that they could think of."

Laubach says that while training with the Navy SEALs wasn't necessarily fun, it provided a sense of unity.

Laubach and Kasold are both graduates of Wake Forest University. So, too, is the captain of the team, Lauren Crandall. That gives the small private school in Winston-Salem, N.C., more ties to the 16-woman team than any other school.

When Crandall, Laubach and Kasold played for Averill at Wake Forest, they won three Division I national titles. Now they're taking aim at an Olympic medal — a goal the American team hasn't reached since 1984, three years before Kasold was born.

"I think about each day individually, but visualize what it would be like," Kasold says. "I see us standing on the podium because I know that we're good enough, we're capable of doing it. So I see it as the final product, the end, the goal."

Seven of the team's members were on the 2008 Olympic squad that finished eighth in Beijing. This group is confident and prepared for what awaits in London — including sellout crowds at one of the biggest venues of the games.