Accessibility links
Waste Not, Want Not: Town To Tap Sewers For Energy Officials in Brainerd, Minn., say the sewers below the city streets are a huge potential source of energy that could be used for heating and cooling. A local company has devised a system to capture the energy, and city officials plan to hook up the police station by the end of the year.

Listen
Waste Not, Want Not: Town To Tap Sewers For Energy 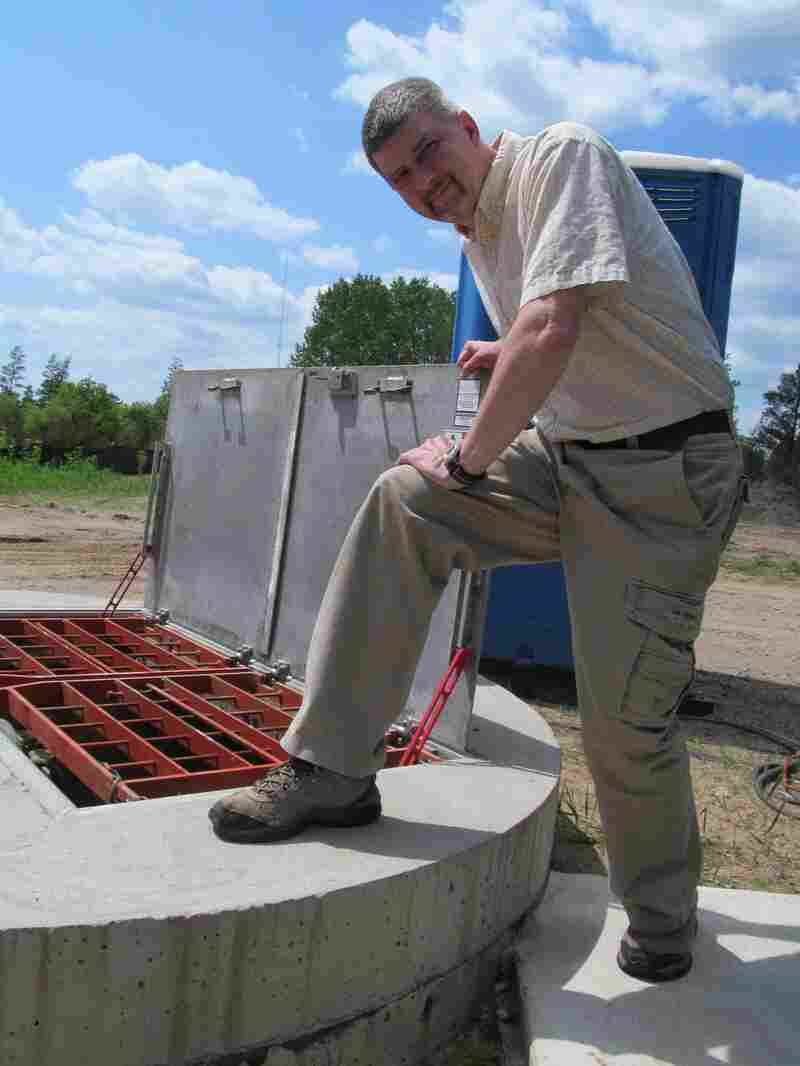 Brainerd Public Utilities' Scott Sjolund at a sewer site. Sewers around the city were monitored to gauge the amount of potential energy flowing through the system. Conrad Wilson for NPR hide caption 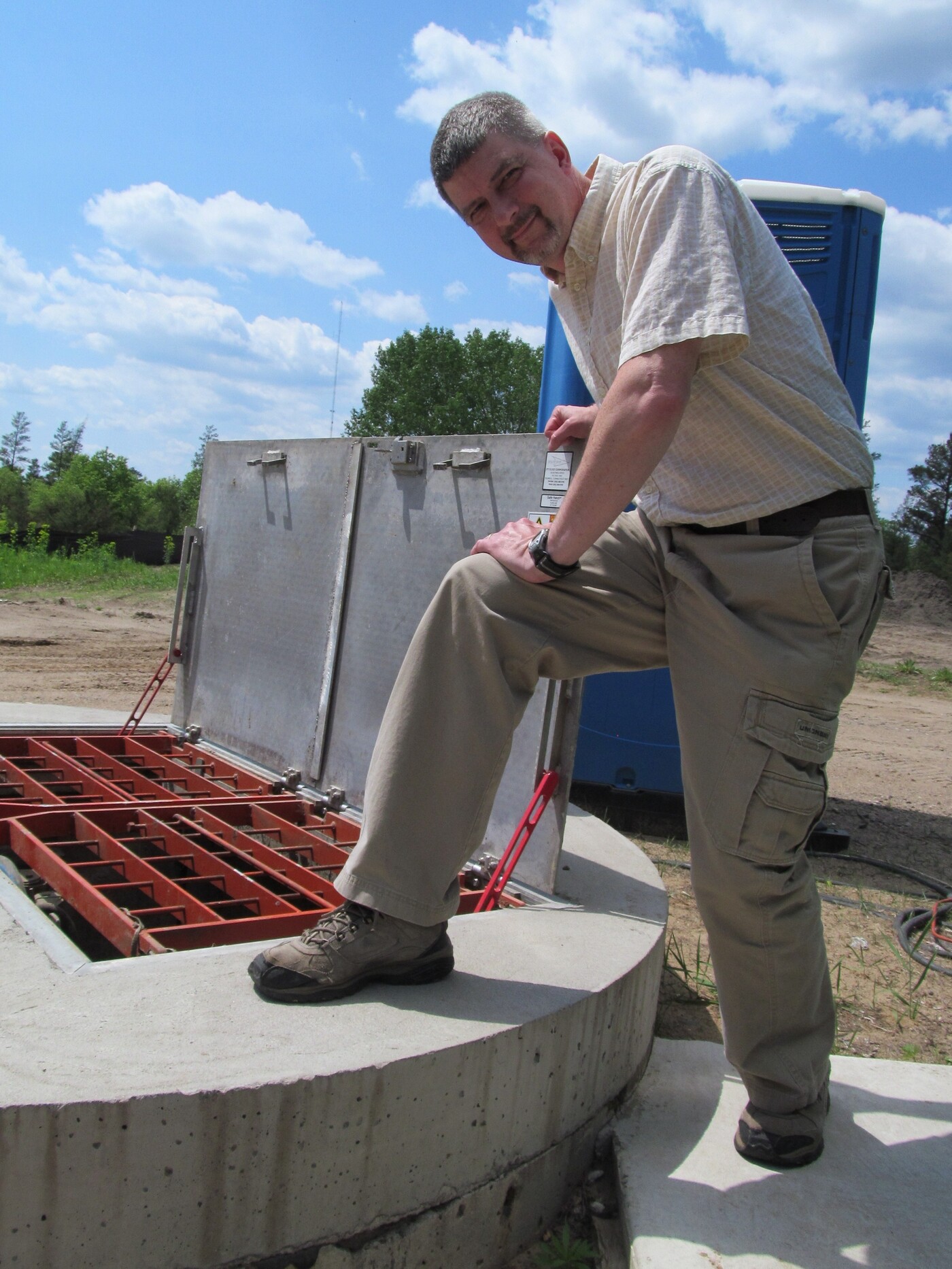 Brainerd Public Utilities' Scott Sjolund at a sewer site. Sewers around the city were monitored to gauge the amount of potential energy flowing through the system.

Most Americans use electricity, gas or oil to heat and cool their homes. But the small city of Brainerd, Minn., is turning to something a bit less conventional: the sewer.

As it turns out, a sewer — the place where a city's hot showers, dishwashing water and organic matter end up — is a pretty warm place. That heat can generate energy — meaning a city's sewer system can hold tremendous potential for heating and cooling.

It's just that unexpected energy source that Brainerd hopes to exploit.

Scott Sjolund, technology supervisor for Brainerd Public Utilities, is standing on the corner of 6th Avenue and College Drive in Brainerd, as sewage rushes unseen through underground pipes.

"Everybody heats water up ... and all that gets drained down the sewer, and that's potential energy that could be extracted. That's part of the equation," Sjolund says.

"Actually extracting it in an economical fashion," Sjolund says, is the equation's critical second part.

The idea for this project comes from Brainerd-based company Hidden Fuels. In 2009, the business partnered with the city and the school district and received a $45,000 grant from the federal stimulus package.

Hidden Fuels' Peter Nelson says the first phase of the project involved installing sensors in the city's sewers. For more than a year, the company and the city measured the temperature and amount of sewage running through the system to create a thermal energy map.

Everybody heats water up ... and all that gets drained down the sewer, and that's potential energy that could be extracted.

"It shows that there's a significant amount of energy — literally enough to heat hundreds of homes — within the streets of the city of Brainerd," Nelson says.

That data helped the team match energy sources with buildings where they could install new heating and cooling systems.

Now that they know how much energy is available, Nelson says the next step is converting it into usable energy. That's challenging, he says, but doable.

Hidden Fuels will rely on technology already in use to implement the project, which will function in a manner very similar to geothermal heating and cooling systems. By circulating water through a heat pump, energy can be extracted to either heat or cool a building.

A similar system was used during the 2010 Winter Olympics in Vancouver, Canada, but that setup didn't tap an existing sewer.

Experts in renewable energy circles says they're impressed by the potential of this idea. John Lund, a professor of civil engineering at the Oregon Institute of Technology, says going to the sewer for energy could cut the cost of installing geothermal heating and cooling systems in half.

Sewer water, he says, is already in the right temperature range. In Brainerd, the temperature in the sewers varies between 42 and 66 degrees Fahrenheit.

"Using sewer water, I think it's a natural," Lund says. "You're just digging in and tapping into the sewer line, and just pulling the heat or rejecting it."

In Brainerd, the police station and the local high school may be the first two buildings to draw energy from the sewer.

Earl Wolleat, director for buildings and grounds with the Brainerd School District, says there's enough energy running in just one of the sewer pipes to heat the entire high school. That could save tens of thousands of dollars every winter.

"If you stop and think about it, it's not surprising that the energy is there," Wolleat says. "But I think it all comes down to the practical application ... to find that way to get that heat out of the sewer."

Wolleat is confident that the technology will work. But with natural gas prices at historic lows, he says, the cost is a drawback. It could take years for the district to amortize the cost of switching systems.

But, he says, "it's definitely going to be an advantage to the district over time." And if the price of fossil fuels goes back up, sewage power could become a more attractive alternative.

In the meantime, Hidden Fuels hopes to have the police station heated by sewer power by the end of this year.