Accessibility links
For Syrian-American Doctors, A Painful Homecoming Joining efforts to help victims of the war in Syria, Syrian-American doctors are bringing desperately needed supplies and knowledge to facilities in Turkey overwhelmed by the wounded. Some are treating Syrians there, while others are crossing the border to use their skills on the battlefield. 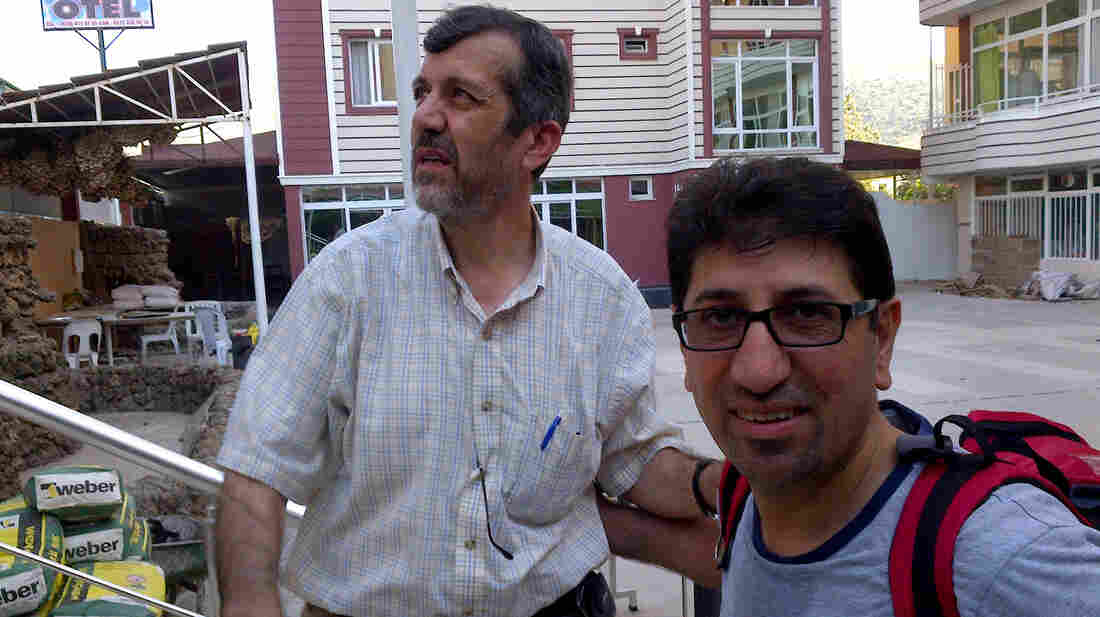 Dr. Yahya Abdul Rahim (left) and Dr. Ammar Ghanem are among the Syrian-American doctors who have come to the Turkish-Syrian border to help Syrians wounded in the anti-government revolt. Some work to improve the flow of supplies; others treat patients in Turkey; still others, like Ghanem, strap backpacks on and walk across the border to help those in Syria. Deborah Amos/NPR hide caption

The Turkish border is a key link for the revolt in neighboring Syria. Turkish ambulances are stationed at border crossings to cope with the flood of injured Syrians, often as many as 30 a day. And now, Syrian-American doctors are volunteering in a humanitarian effort to help the wounded and to bring crucial medicines for field hospitals inside Syria.

A busy office in the Turkish border town of Antakya represents something new in the Syrian revolt — a direct link between rebels fighting the regime of Syrian President Bashar Assad, and a humanitarian network to support wounded fighters and civilians.

The Union of Syrian Medical Relief Organizations was founded by an American doctor from Texas. The office in Antakya is run by a fashion designer from Syria. His managerial skills are crucial for the work here — for the first time, compiling complete case records of Syrian patients in Turkish hospitals, with recommendations for follow-up care.

Across the street, a medical supply warehouse is run by another Syrian-American, a clinical pharmacist from Cincinnati, Ohio, named Khaula Sawah.

Sawah, who was born in Syria, is working on a system to organize what has been an ad hoc smuggling operation.

"I am all the time here to organize medical supplies inside Syria, as well as taking care of the injured here," she says.

The shelves are filled with supplies paid for privately by Syrian exile groups. It's not nearly enough, says Dr. Ammar Ghanem, from Fort Wayne, Ind.

"What's going on in Syria is disaster," he says.

Ghanem is one of 30 American doctors who recently arrived in Antakya. They all came with full suitcases packed with a million dollars' worth of vital supplies donated by an American medical manufacturer. 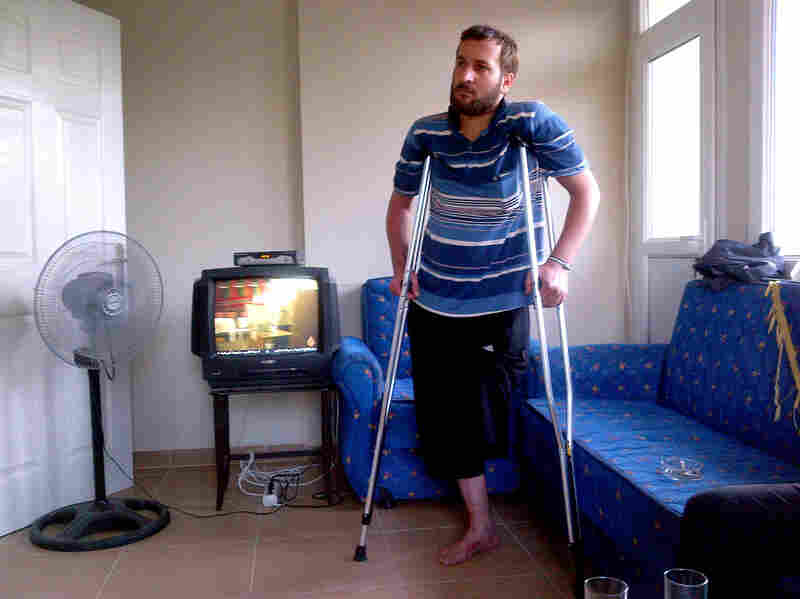 Doctors treating the injured say the Syrian regime is using more lethal weapons and targeting specific areas to maximize the damage. As a result, there have been many amputations, as was the case with this rebel fighter, 28-year-old Raad Ibrahim, who was wounded in Idlib province and is being treated in Turkey. Deborah Amos/NPR hide caption 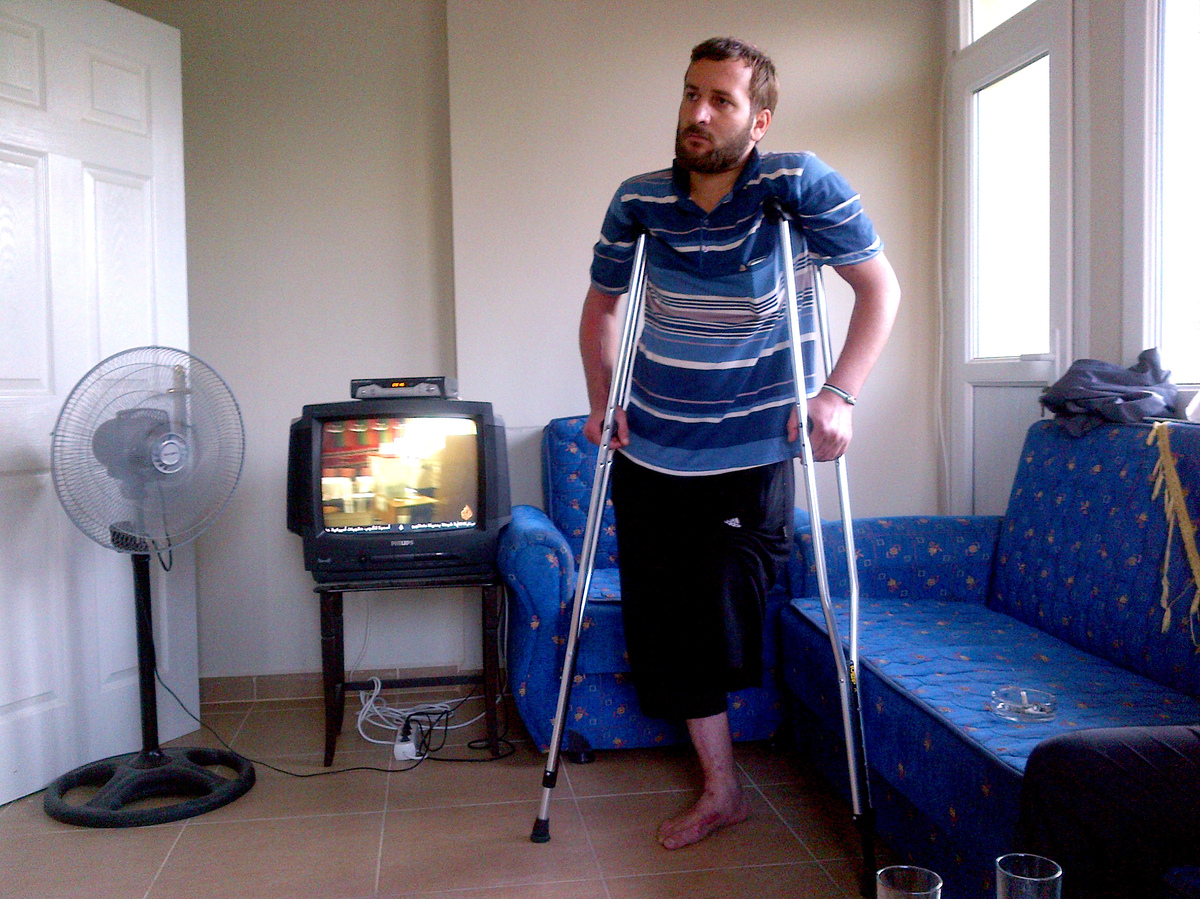 Doctors treating the injured say the Syrian regime is using more lethal weapons and targeting specific areas to maximize the damage. As a result, there have been many amputations, as was the case with this rebel fighter, 28-year-old Raad Ibrahim, who was wounded in Idlib province and is being treated in Turkey.

One in-demand supply is a type of gauze that stops bleeding.

"This is very needed. When we come here we brought like 3,000 pieces," he says. "They are gone within one day."

The clotting gauze went to a field hospital inside Syria. Syrian activists are stationed on the border now, a stretcher brigade trained to transport seriously injured cases to Turkey. Ghanem, an intensive care specialist, says for many, it will take years to recover.

With so many Syrians dying on the long trek to Turkey for treatment, there is a race to organize and streamline this emergency operation inside and outside Syria. Turkish hospitals are overwhelmed by the caseload in Antakya, a resort town. The Turkish doctors don't have much experience with battlefield injuries, and have no resources for follow-up care. So Syrian-American doctors have stepped in to help. 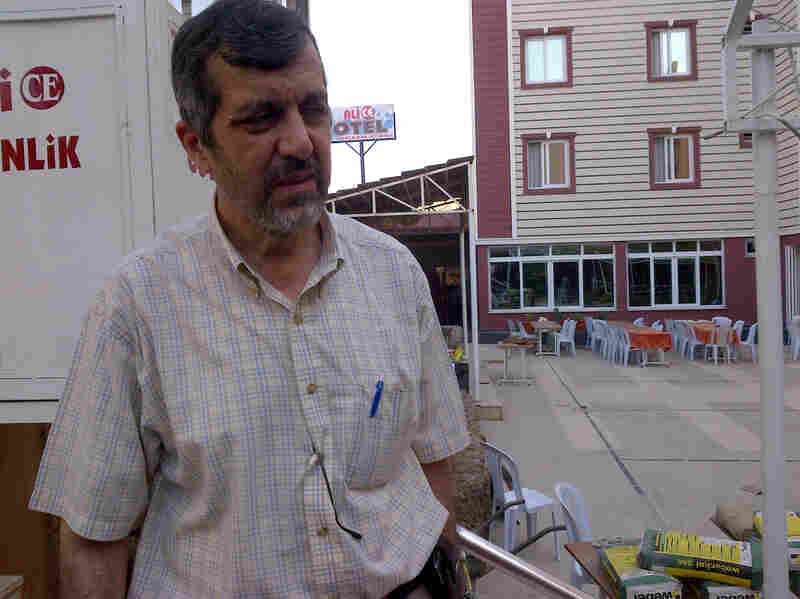 Abdul Rahim is a Syrian-American doctor from Florida who was among the first to arrive in Syria to help the wounded. Deborah Amos/NPR hide caption 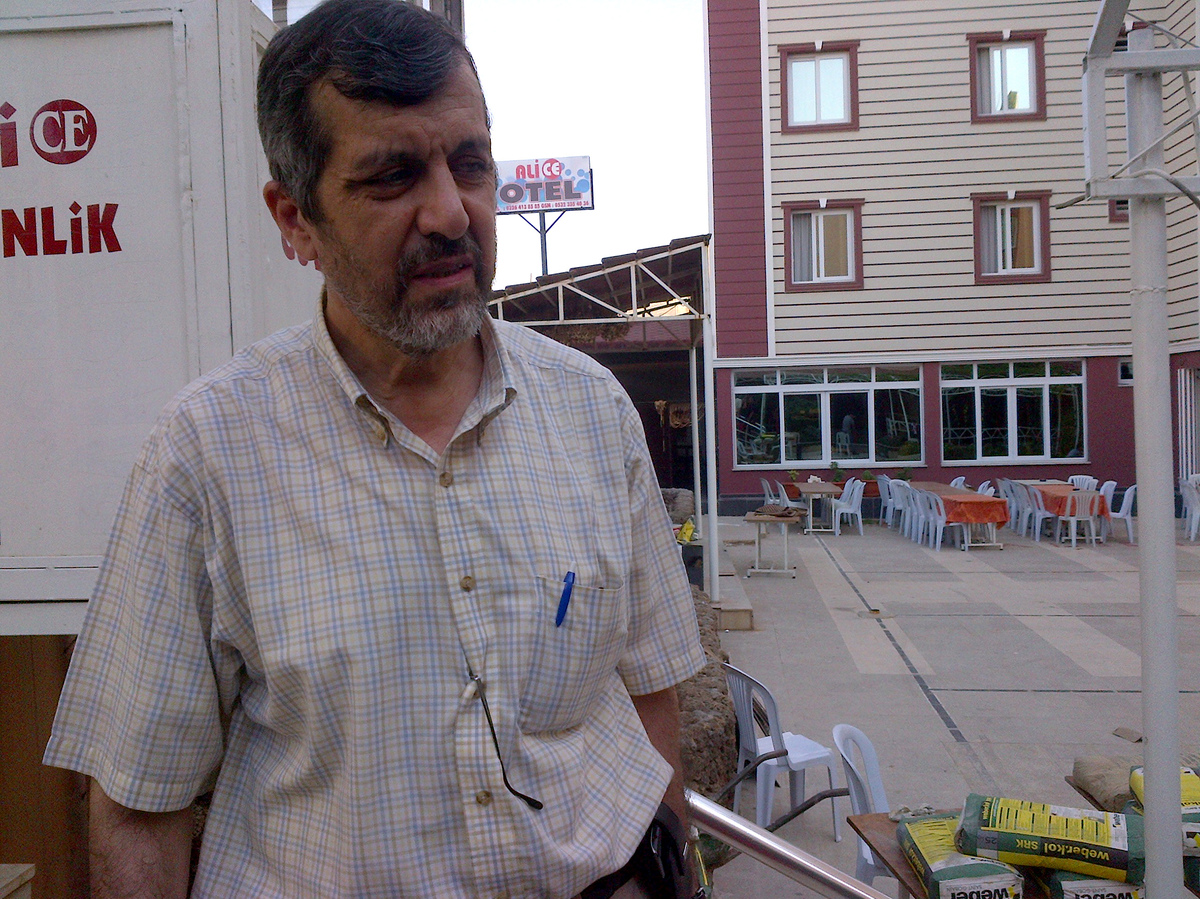 Abdul Rahim is a Syrian-American doctor from Florida who was among the first to arrive in Syria to help the wounded.

"I feel I am paying back some of duty for my homeland, who has been suffering for years and years, and for decades," he says.

Abdul Rahim was the first member of the American medical team to arrive. He organized a rotation of volunteer doctors willing to cross into Syria, and psychiatrists to counsel trauma victims in the Turkish camps.

Despite all the suffering, Abdul Rahim he says he is optimistic. That was tested when news from inside Syria interrupted his interview with NPR.

"Just an hour ago, one of my best friends been shot and killed, and he is one of the most nice person you can imagine," Abdul Rahim says. "He was big asset for the medical mission in Syria. Just an hour ago — I just heard it a few minutes ago."

Then, Dr. Ghanem — the intensive care specialist from Fort Wayne, Ind. — arrives from a full day at the warehouse. He straps on a large red medical backpack.

And with that, carrying a full medical kit for resuscitating severely wounded patients in the field, Ghanem is on his way — on foot across the border to Syria.