Accessibility links
Who We Are And Who We Think We Are: Singing Along With Gotye We explore how two guys in a car singing along to Gotye make a great point about culture.

Who We Are And Who We Think We Are: Singing Along With Gotye

Who We Are And Who We Think We Are: Singing Along With Gotye

In this very amusing video, two dudes hear the song "Somebody That I Used To Know" and immediately talk about how much they totally have to change the station because they hate that song. Right, dude? Totally, dude.

Most of what makes this so delightful is that it's just so funny — I particularly enjoy the guy on the left, who really digs the high notes and has internalized the singing style, if not very many of the words.

But part of it is also how utterly true it rings, because there's such a huge difference between how we react to something with our outward-facing cultural identity and how we react to it as human beings.

When the guys in this bit are talking to each other, they're positioning themselves relative to the song. Their reasons for hating it are actually pretty common ways that people use culture to establish a personal identity.

1. "This song plays everywhere." "Can I go, like, 20 seconds without hearing it?" Mocking things for being ubiquitous means you're special, you're different, you have refined tastes. "I am not the masses," is what this means.

2. "What is this? The dubstep remix ... dance party remix ..." Supposedly cool lingo alert! This is essentially the same thing as saying "hipster song." Gently ridiculing other people's mistaken belief that something is cool or interesting is how you establish that you, unlike those people, actually do know what's cool and interesting.

3. "Featuring Pitbull." Sarcastic mention of overhyped personality = being yourself immune to overhyping.

4. "He's from New Zealand too, I think." "I mean, who is this guy anyway?" Declaring that the Emperor has no clothes is how you establish your fearlessness.

5. "A drunk child could play that part on a xylophone." Here, you establish that you are a connoisseur of instrumental technique; this isn't about your taste, but about the fact that you appreciate people who are technically skilled.

And then, of course, they don't change the song.

I'm not suggesting that the primary way to absorb this video is as a lesson in anything, but I am suggesting that this is a real thing that real people really do. A lot of people have a public cultural identity that endorses only (1) things that they think are beneficial to society according to a sort of cultural code of ethics and (2) things that are consistent with the way they want other people to believe (sometimes truthfully, sometimes not) that they relate to culture. But then they also have a private cultural identity that consists of what they actually like and respond to and enjoy. In some people, there's a huge amount of overlap between those two things — if you think of it as a Venn diagram with the things you endorse in yellow and the things you like in blue, it looks like this. 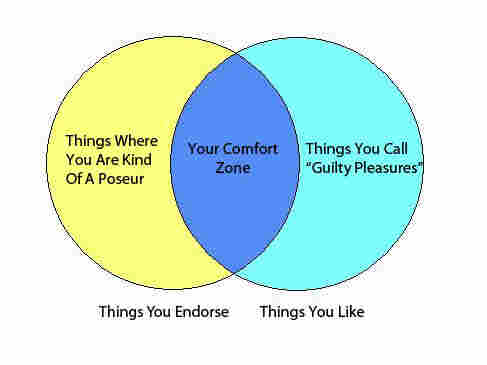 Not all of what I'm calling the poseur stuff is bad, by the way — that can also be the art you support on principle, even though it doesn't float your boat. That might lead you to fund a Kickstarter for a project you admire but wouldn't actually enjoy, or to give to your local orchestra for the sake of your community even though you don't like classical music.

Sometimes, a couple of guys who can't stop singing Gotye is just a cigar ... or something. Still, it's a surprisingly good illustration of the principle that what you like, you like, whether you think it sounds like a dubstep remix of Pitbull or not.