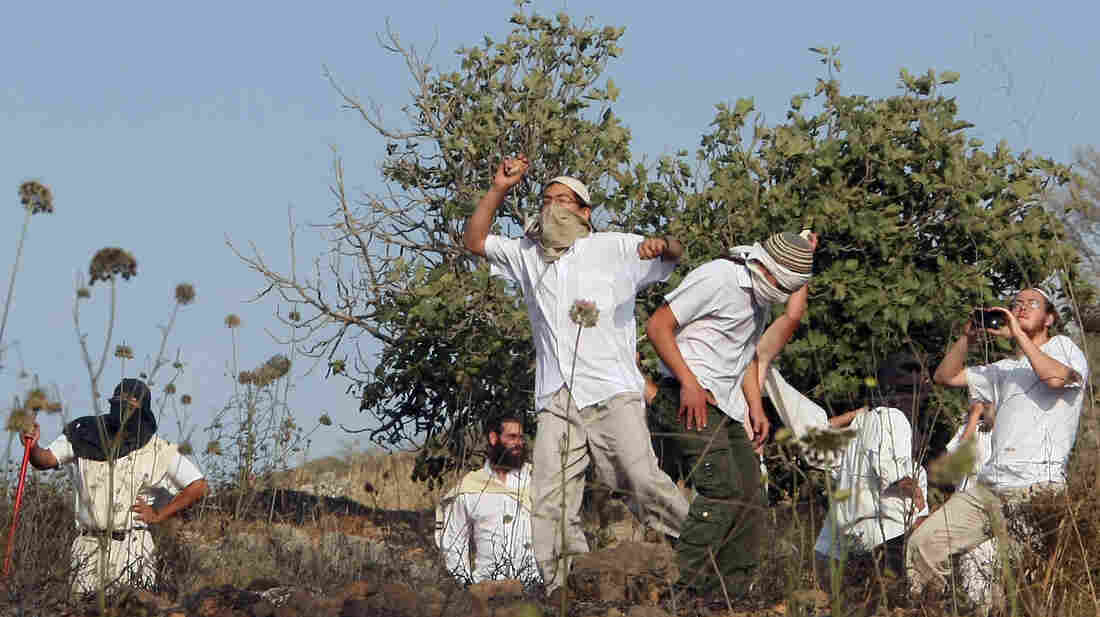 Jewish settlers in the West Bank throw stones during clashes with Palestinians near the city of Nablus on May 19. A new report says violence by settlers directed at West Bank Palestinians is up sharply over the past three years. Jaafar Ashtiyeh/AFP/Getty Images hide caption 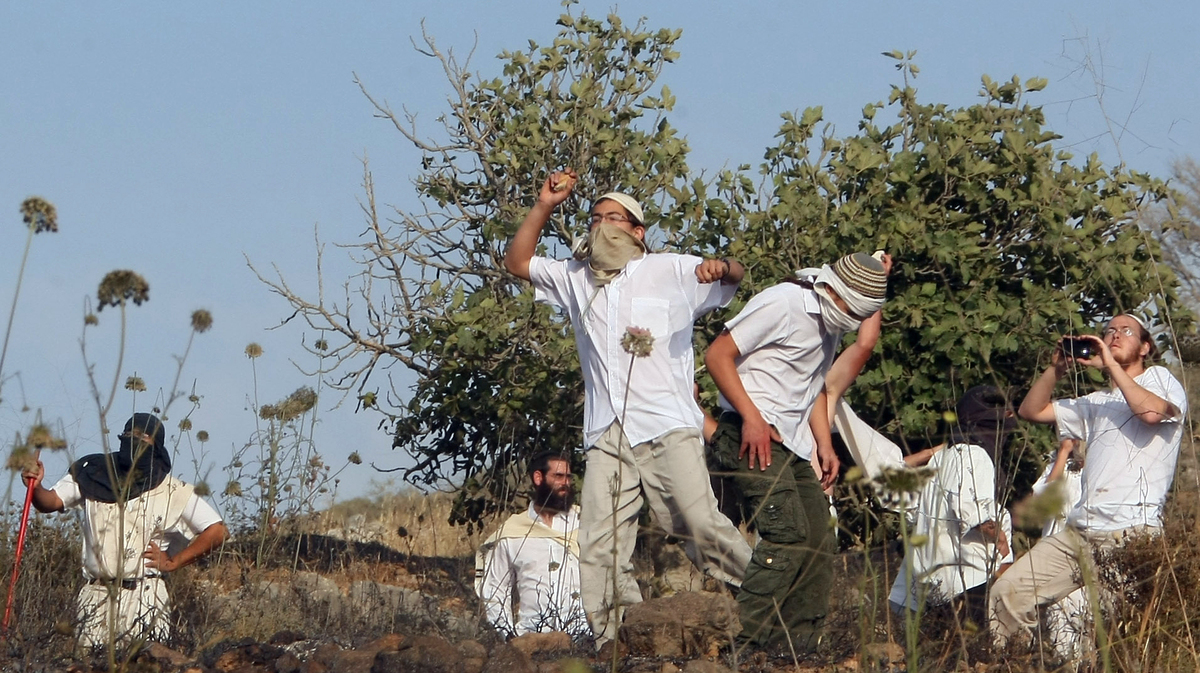 Jewish settlers in the West Bank throw stones during clashes with Palestinians near the city of Nablus on May 19. A new report says violence by settlers directed at West Bank Palestinians is up sharply over the past three years.

Farming is the mainstay of the Palestinian communities around the West Bank village of Yanoun. Animals graze the land, and Palestinians make their living by harvesting citrus fruits and olives.

Last Saturday, Palestinians say, a group of Jewish settlers killed some of the sheep belonging to the Bani Jabr family. Palestinians say its part of a regular pattern of harassment in the area by settlers.

Ibrahim Bani Jabr, who received a cut across his right eye that needed 12 stitches, alleges that Israeli soldiers hit him with a rifle butt to the head when he tried to stop the slaughter of his sheep on land that belongs to his family.

Overall, violence between Israelis and Palestinians has been at relatively low levels the past couple of years.

From the level of the [Israeli] soldier on the ground all the way up through the military and the police and the government, a much higher priority is given to addressing Palestinian violence than violence against Palestinians.

But violence by Jewish settlers living in the occupied West Bank has increased dramatically, according to several United Nations agencies, as well as Israeli and Palestinian groups that monitor the violence. A report released by these groups this week says settler attacks on Palestinians have increased by 150 percent in the past three years. More than 150 attacks have been reported in the first half of this year.

There are more than 100 Israeli settlements in the West Bank where more than 300,000 Jewish settlers live. The international community views them as illegal under international law. However, every Israeli government has permitted settlement building since Israel took the West Bank in the 1967 Mideast War. The current Israeli prime minister, Benjamin Netenyahu, has been a particularly strong proponent of settlement building.

According to the new report, that growing population is one of the reasons there is a surge in violent confrontations between Israelis and Palestinians in the West Bank.

The report says militant settlers are using violence as a tool in their campaign to take over more territory.

"Violence is a means of displacing Palestinians and expanding the settlements in a very explicit way," says Jessica Montell, who heads the Israeli human rights group B'tselem.

Because the Israeli military is the ultimate authority in the West Bank, it has a legal obligation to protect both Israelis and Palestinians, but that isn't happening, says Montell.

"From the level of the soldier on the ground all the way up through the military and the police and the government, a much higher priority is given to addressing Palestinian violence than violence against Palestinians," she says.

Some 90 percent of complaints against settlers by Palestinians have been closed without an indictment, according to U.N. figures. That is allowing the settlers to act with virtual impunity, the U.N. says.

"Palestinians are almost defenseless. They have lost faith in the Israeli authorities who are the ones who should ensure law and order," says Matthias Behnke, with the U.N High Commissioner for Human Rights.

Moshe Goldsmith, the mayor of the Itamar settlement, disputes the narrative that settlers are resposible for the bulk of the violence.

Goldsmith notes that Palestinian terrorists killed five members of one Jewish family in their beds in Itamar last year.

"I don't know anyone in Itamar, in our community, who has been arrested for attacking Arabs," he says. "Give me a name of someone."

But Udwan Bani Jabr, who was also injured in Saturday's confrontation, says there is no justice for Palestinians. The army protects the settlers, and the settlers, he says, do what they want.