Accessibility links
TV Interview - 'Political Animals' - Sigourney Weaver: No Damsel In Distress The actress stars in the new TV drama Political Animals as Elaine Barrish, a former first lady and current secretary of state. She spoke to Morning Edition's Renee Montagne about the new show and the kind of female characters she tends to get cast as. 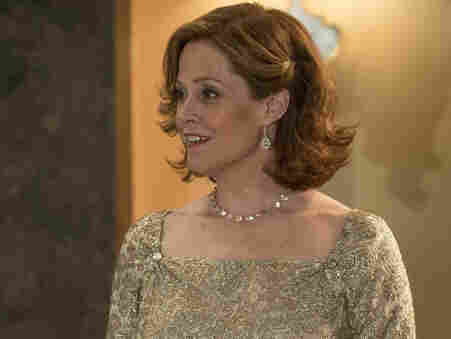 In Political Animals, Sigourney Weaver plays Elaine Barrish, a secretary of state and former first lady whom Weaver says is based on many former residents of the White House — not just on Hillary Clinton. David Giesbrecht/USA Network hide caption 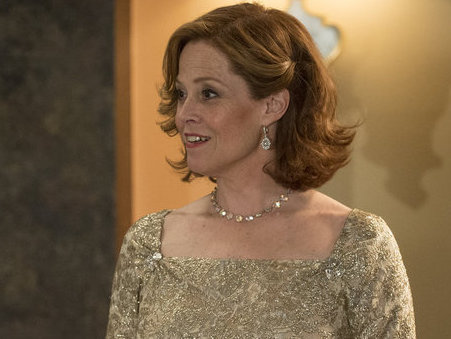 In Political Animals, Sigourney Weaver plays Elaine Barrish, a secretary of state and former first lady whom Weaver says is based on many former residents of the White House — not just on Hillary Clinton.

There's no culture more distinct than the political circles of Washington, D.C., and Sigourney Weaver is taking it on in Political Animals, a new television series where she plays a former first lady and current secretary of state.

Over the course of a distinguished acting career, Weaver has battled intergalactic aliens and befriended gorillas in the mist. In Political Animals, Weaver's character, Elaine Barrish, finds her biggest adversary in a hyperambitious political reporter by the name of Susan Berg.

Throw in a philandering former president, who's now her ex-husband, and Barrish's own failed bid for the presidency and one thinks: Hillary Clinton?

The actress says not so. She tells NPR's Renee Montagne that the shooting script had a disclaimer saying Political Animals isn't based on any one real-life mover and shaker.

On the show's real life influences

"I think the show is inspired by a lot of the families that have been in the White House. It kind of puts forth the idea that a family who's in the White House pays a price for being in the White House, and part of that price is that they then always have the desire to get back in the White House. So it's inspired not just by the Clintons but also by the Bushes and the Kennedys — all these political families, these dynasties, who Greg Berlanti, our creator, would say are the closest we have to royalty."

On the role of family in Political Animals

"One of the fascinating lures for me of the show was this going back and forth between public life and private life — being in the halls of power, but then being in the living rooms of these people. Elaine Barrish is so at the top of her game in the world, but, like [for] all of us, real life, family life, home life is much more difficult to navigate."

On the similarities between Hollywood and D.C.

"I think in my industry — and I'm sure your industry is the same — the people who keep getting the jobs, first of all, are very professional people, they're stable people and they're people who are very creative. I consider myself very much a team player. To me I'm just one element in that group.

"[Washington] probably is another culture, and I don't realize it. One of the reasons I was attracted to playing Elaine was that she comes in with a different spirit in Washington. She's going to make things better for people, and she's not going to get bogged down with party politics and all these other games that the men who are in power are still playing."

On the strong female characters she predominantly plays

"When I look around the world, I don't see too many damsels in distress. If they're a damsel in distress, they're manipulating some guy to help them. I feel that we're incredibly resourceful and strong and keep our heads. So all I'm doing is reflecting women to me as they are because the women I know are strong. My god, they hold this world together. So it's not that I'm avoiding playing damsels in distress. I don't really buy them."