Accessibility links
Original Fiction In All The 'Shades' Of Fandom Fifty Shades of Grey, the biggest phenomenon in publishing right now, began as a work of fan fiction based on the Twilight books. Now, author E.L. James is taking the series to the ultimate fans: attendees at this year's San Diego Comic-Con. 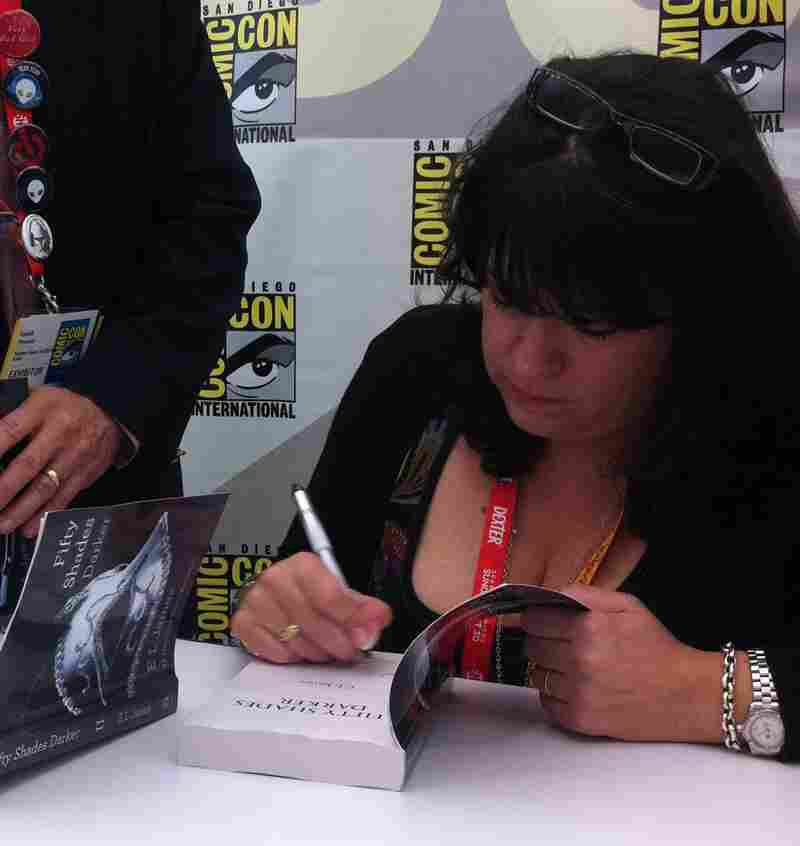 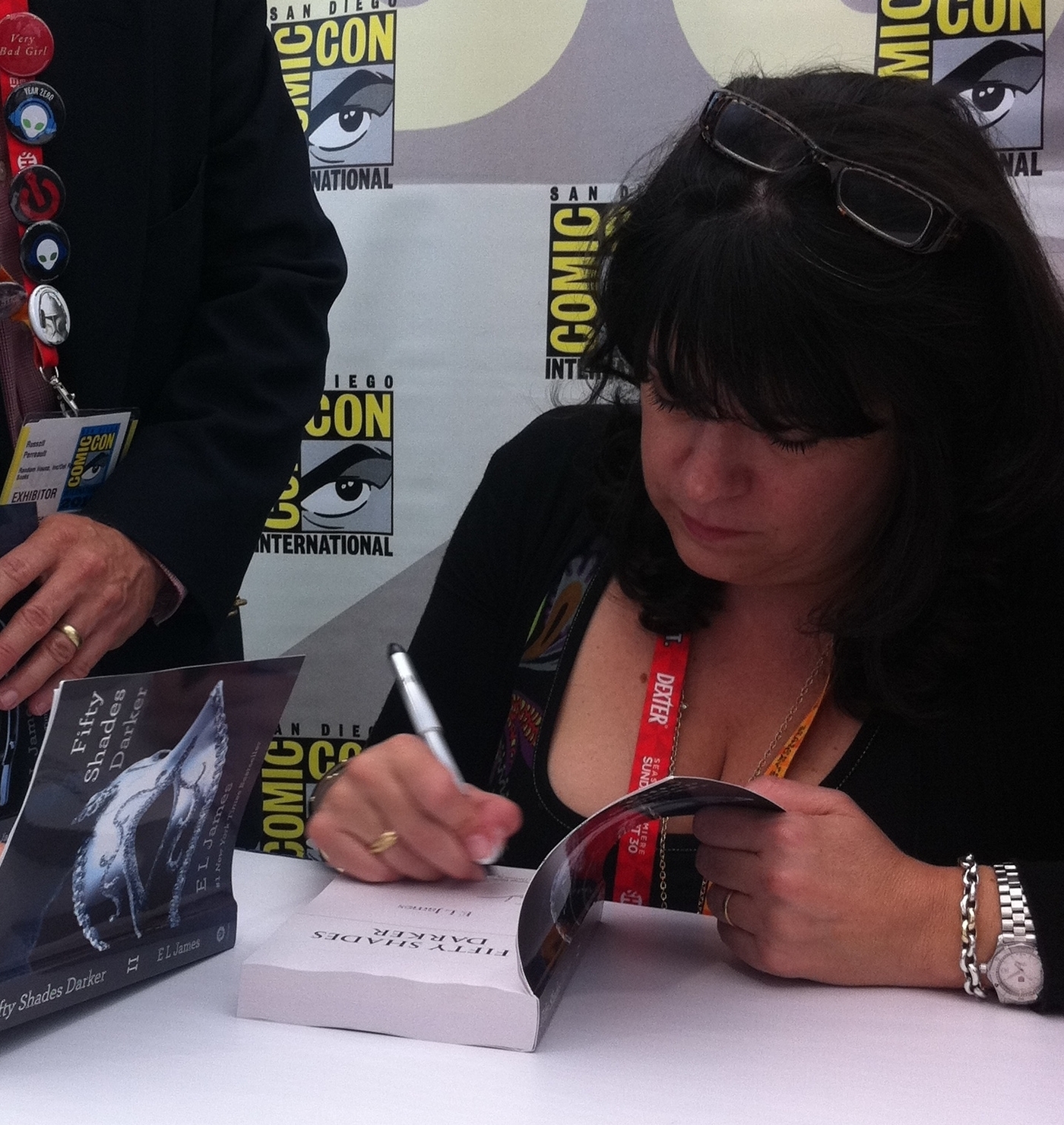 E.L. James signs copies of her book Fifty Shades of Grey at Comic-Con in San Diego on Thursday.

This Friday the 13th, fans of horror films and hobbits, science fiction and fantasy are descending upon the San Diego Convention Center. They're gathering for the annual explosion of pop culture fandom that is Comic-Con. One of the biggest phenomena in pop culture at the moment will be making an appearance, and it's not a man of steel or a boy slinging webs.

It's a 40-something woman who writes... wait for it... steamy romance. 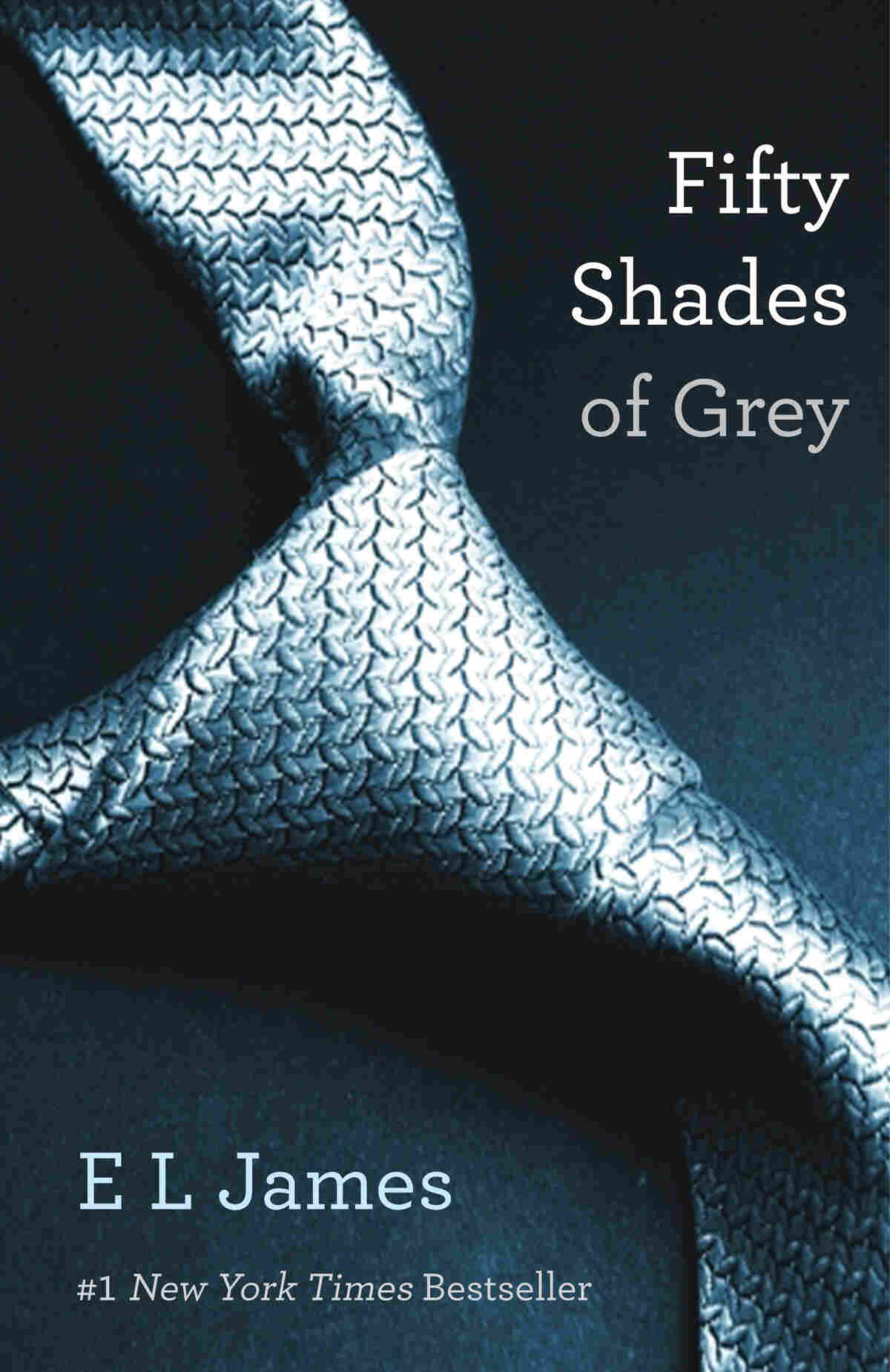 Those books are the Fifty Shades of Grey trilogy. They evolved from Twilight fan fiction into pretty hard core erotica. In just four months, the books have sold 20 million copies.

To put things in perspective, the Dragon Tattoo trilogy took four years to reach those numbers. Fifty Shades occupies four spots on The New York Times best-seller list: that's each of the books, plus the box set. It was the first title to sell a million copies on the Kindle. But this success was nothing James ever sought — or imagined.

Perhaps it's such a shock because the books came from fan fiction. Two years ago, James was here at Comic-Con on a panel of fan fiction writers, long before the books ever existed. She knows the fan fiction community is passionate about many things, including its gift economy.

"It's free. It's fun and it's free," says Suzanne Scott, a media scholar at Occidental College who studies fan culture. "Part of the reason that these texts circulate for free is because they build community. And there's a sense that once you start selling those pieces of fan fiction, the values of that community [dissolve]," she adds. "There's an anxiety that fandom is going to be transformed into a place where people go to go pro."

Francesca Coppa, who teaches English and film studies at Muhlenberg College, studies the genre. She explains the reasons many writers want to remain amateurs.

"Nobody says, 'Wow! You play the piano great, why don't you become a professional pianist?' " she says. "And so you have a world where very talented people may do things because they enjoy them and they're actually quite good at them, but they're really not interested in taking this into a commercial, professional arena."

While James did wrestle with whether to go pro, she doesn't appear to have any regrets. "There are two things about all this whole experience that I have found incredibly rewarding," she says. "The one that it brings women together, to discuss it, to have fun, to debate it. The other thing is ... people who haven't read books for years are reading it."

That was apparent at Comic-Con, amongst the legions of fans lining up to get their books signed.

Plans for a movie are in the works. And for fans who can't wait for their next fix, there's always Fifty Shades fan fiction.

Read an excerpt of Fifty Shades Of Grey