Accessibility links
County Considers Eminent Domain As Foreclosure Fix California's San Bernardino County says seizing troubled properties would allow those homeowners to refinance their loans. Critics say the plan, if implemented, will be bad for business and could dissuade banks from making future loans in the county. 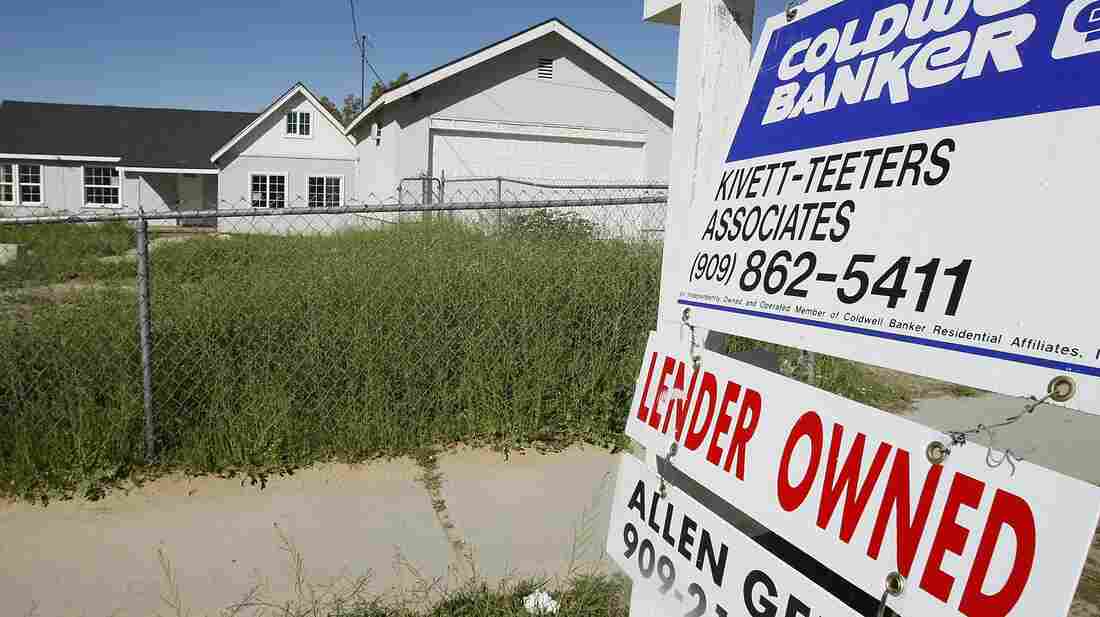 Half of San Bernardino County's 300,000 mortgages are underwater. In an attempt to ease the mortgage crisis, the Southern California county is considering taking control of some of those properties by eminent domain. Robyn Beck/AFP/Getty Images hide caption

County and city officials in San Bernardino, Calif., are considering a controversial plan: using the power of eminent domain to take over "underwater" mortgages, where the value of the home is worth less than the original loan. Taking on those properties, officials say, would allow the homeowners to refinance those troubled loans.

Half of all 300,000 mortgages in the Southern California county are underwater, according to county officials. While some are in the process of foreclosure, a good number of affected homeowners are still paying their mortgages — with only dim hopes that their homes will ever recover in value.

The situation isn't much better in the city of San Bernardino. This week, the council voted to seek bankruptcy protection — one more indication of the region's distress.

If San Bernardino County implements the plan, it would become the first local government to use its powers for this purpose, and would quickly become a test case for a novel approach to the mortgage crisis.

"Despite efforts by the federal government, the state government, private enterprise, the attorneys general — you go down the long list — we've come up with no solutions," says entrepreneur Steven Gluckstern.

So, just over a year ago, Gluckstern and his colleagues formed what eventually became the firm Mortgage Resolution Partners. Their goal: to devise a plan that would fix the housing problem while also making money.

"When you owe more on your house than the house is worth, your behavior changes," says Gluckstern, now the firm's chairman. "You don't spend money going to a local restaurant, you don't hire the local handyman. So our thesis is, unless you fix this problem, you can't really ever have the recovery we're all hoping for."

Gluckstern says the way banks packaged and traded loans before the housing sector collapsed makes the loans difficult to modify. What's needed to undo that, he argues, is a powerful legal tool that can force mortgage investors to sell those loans and cut through all the red tape.

"We have to take specific and, I think, unusual and unique action," Gluckstern says.

And the appropriate action, according to Mortgage Resolution Partners, is eminent domain.

Governments typically use eminent domain to compel takeover of property for projects like highway construction or, in some cases, private development.

But there are two basic constraints for eminent domain: It must serve a public purpose, and the property owner must receive just compensation.

In this latest proposal, San Bernardino County, along with two of its largest cities, Fontana and Ontario, would use eminent domain to buy loans where the homeowner is underwater but current on payments. Participation would be entirely voluntary.

The loans would be acquired at a discount large enough to enable new lenders to refinance the mortgage at a lower amount, if the homeowner so chooses.

The entire program would be funded by Mortgage Resolution Partners. The firm would, in turn, collect a fee for every loan that's modified.

Sinking Under A $10,000 Monthly Mortgage Payment

A Waiting Game For Homeowners Trying To Sell Short

David Wert, a spokesman for the county, says public discussion has only just begun on the proposal, and that nothing has been decided.

But, Wert says, the county has already heard from many homeowners who support the plan — and many, he notes, already want to sign up.

But the proposal has also garnered lots of vocal opposition.

"Eminent domain is created for public benefit. And the majority of the benefit for this [plan] is private," says Paul Herrera, government affairs director for the Inland Valleys Association of Realtors.

Herrera says San Bernardino's plan would only enrich Mortgage Resolution Partners — whose original members included Phil Angelides, former California state treasurer and chairman of the Financial Crisis Inquiry Commission, the federal entity looking into the cause of the financial crisis.

Chris Katopis, executive director of the Association of Mortgage Investors, also opposes the plan. He says the proposal would rip off mortgage investors who argue that the value of their contracts entitles them to be paid in full.

"This really sends a signal that it's bad to do business in San Bernardino, and that if you play by the rules, you could get harmed," Katopis says.

In the future, he says, banks will either charge more for lending in the region, or will choose not to lend at all.

Those arguments don't sway Acquanetta Warren, mayor of Fontana, one of the cities considering the proposal.

"I came from Compton, South Central L.A., where they had nothing but redlining. I'm used to banks not doing the right thing in our areas," Warren says.

Warren herself is underwater on her mortgage; her home is worth almost one-third less than what she owes. And when you're underwater, she says, just modifying a home loan is hard enough.

The eminent domain proposal, Warren says, is just about investigating other options. But the banks, she says, are trying to shut down the discussion, "instead of saying, 'You know what, can we come to the table and talk? Can we figure out how we can help people?' "

And because homeowners must be current on their payments to qualify, Warren notes the eminent domain option is specifically for people who have been "playing by the rules."

Both sides acknowledge that the proposal, if adopted, will likely end up in court.

Harvard law professor Howell Jackson says the outcome of a legal challenge will ultimately depend on the structure of the final deal. But, he says, "My own personal view is this is a legitimate public purpose, and the community would benefit from having these properties cleaned up."

Meanwhile, Mortgage Resolution Partners says it's currently in discussions with other cities, as well.