Accessibility links
A Tale Of Two Cities: Too Many Jobs, Or Not Enough Yuma, Ariz., along the Mexican border, has the country's highest jobless rate, at 28.9 percent — more than three times the national rate. Bismarck, N.D., has the lowest rate, at just 2.5 percent. Both communities are struggling with the realities of those economic extremes.

A Tale Of Two Cities: Too Many Jobs, Or Not Enough

A Tale Of Two Cities: Too Many Jobs, Or Not Enough 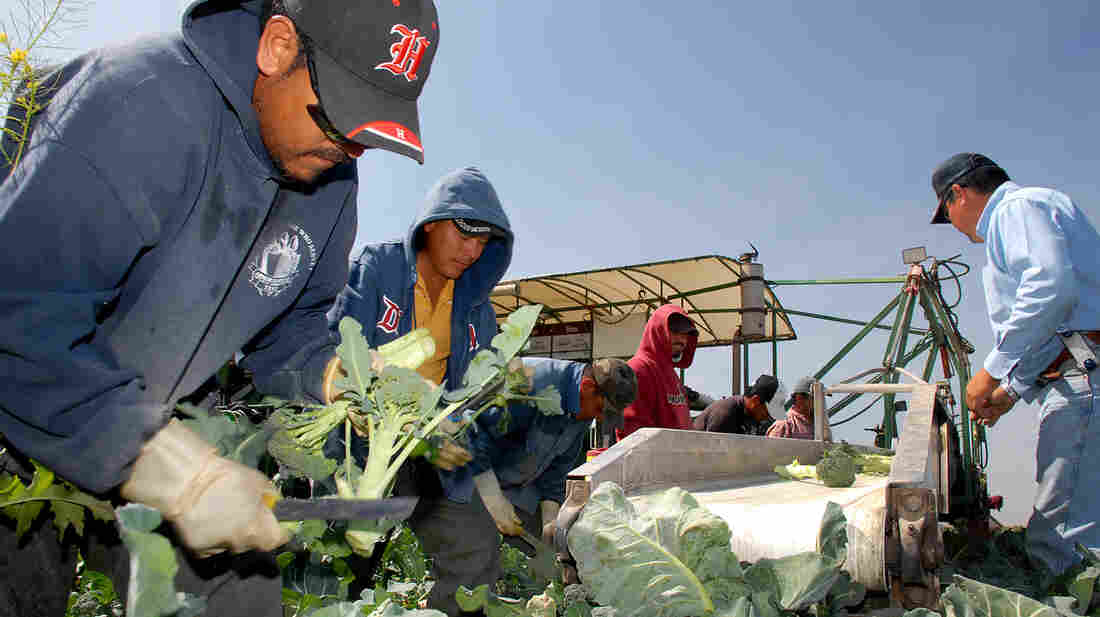 Agriculture is a key job sector in Yuma, Ariz., where the seasonal workforce and migrant labor tend to boost the unemployment rate. Jacob Lopez/AP hide caption

Maria Arvizu continues to fill out job applications even though she has yet to deposit her last paycheck.

Arvizu, 53, relocated to Yuma, Ariz., to become a bus driver for the local school district last year. After school closed for summer break, she was caught off guard when she was laid off. She had expected to get another driving assignment and was denied collecting unemployment because she was still considered a school employee.

"I just keep looking for a job," Arvizu says.

Yuma — a town of about 93,000 along the Mexican border — has the country's highest jobless rate, at 28.9 percent — more than three times the national rate of 8.2 percent. Meanwhile, Bismarck, N.D., has the lowest rate in the U.S., at just 2.5 percent. The disparity shows how local economies differ, and how that diversity affects their jobless rates.

So why is Yuma's rate so high?

The unemployment rate of border communities can sometimes artificially increase — and even double — because of a large uncounted migrant population, says San Diego State University economics professor James Gerber. And border cities tend to have greater health problems and lower levels of education, which are associated with high unemployment, he says.

A Testing Ground For Future Jobs

Yuma's market is heavily influenced by its agriculture sector, which is mostly based on seasonal employment. When growing seasons end for citrus and winter vegetables, workers migrate from Yuma to work on other crops in the region, says Patrick Goetz, business service officer for the Yuma Private Industry Council.

In May, Yuma, Ariz., recorded the highest unemployment rate in the country, while Bismarck, N.D., had the lowest.

The nonprofit helps employers find ways to keep workers on the payroll — through reduced hours or job sharing, for example. Layoffs are the last resort, Goetz says.

"Agriculture season is coming to a close," he says. "Traditionally this time of year we bump up notches on the unemployment scale. In the fall, hospitality and retail [jobs] climb back up as visitors come."

But there are signs that job opportunities are rising in Yuma. Listings on the Yuma Private Industry Council jobs board have increased since last year. In May, 44 employers posted 92 jobs — up from the same month last year when eight employers listed 33 positions, Goetz says.

Amid declines in the construction and retail industries, Yuma is becoming a laboratory for military defense training and renewable energy.

Arizona Western College in Yuma is a test site for companies developing solar-powered technologies. It houses a 5-megawatt solar installation, enough to power about 600 homes a year. Another project that's nearly complete has created about 800 jobs in Yuma and will put 240 megawatts of power on the grid.

Engel says she hopes the projects will draw more manufacturing to the area.

Bismarck, the capital of North Dakota, is at the other end of the U.S. employment spectrum. As of April, the latest month for which data was available, there were 3,300 more jobs in the Bismarck area than a year earlier.

The state's energy boom has helped keep the city's jobless rate the lowest in the country, at 2.5 percent, but it has also kept officials busy struggling to build new schools. A dramatic influx of workers has also created a housing shortage.

Throughout central and western North Dakota, the core sector that reels in jobs is energy, says Kelvin Hullet, president of the Bismarck-Mandan Chamber of Commerce. Traditionally, coal excavation supplied more than 25,000 jobs, but new recoverable oil developments in the Bakken formation have boosted job openings.

With advances in oil drilling methods, 3 billion to 4 billion barrels of oil may be recoverable in the Bakken formation, according to a 2008 estimate by the U.S. Geological Survey. That's 25 times as much oil as the agency estimated in 1995.

Hullet says it has taken more than a decade to diversify the local economy, which also includes health care, agriculture, manufacturing and technical services.

Rapid business developments in Bismarck, which had a population of 61,000 in 2010, have led to a flood of newcomers, causing a scarcity in housing and crowding schools. Hullet says affordable homes have been in high demand since the housing market started to constrict in January. 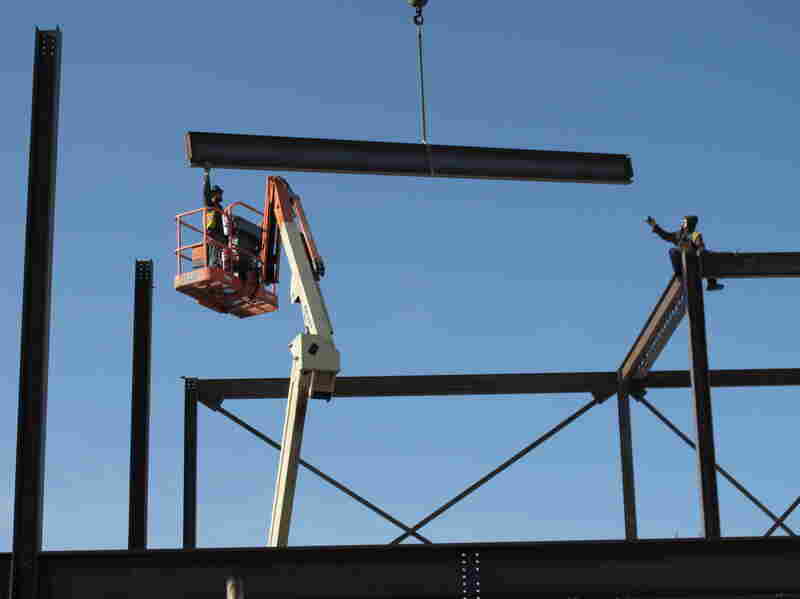 Construction workers ease a steel girder into place as part of a remodeling and expansion of the North Dakota State Penitentiary in Bismarck, N.D. An energy boom has helped the state maintain a budget surplus. Dale Wetzel/AP hide caption 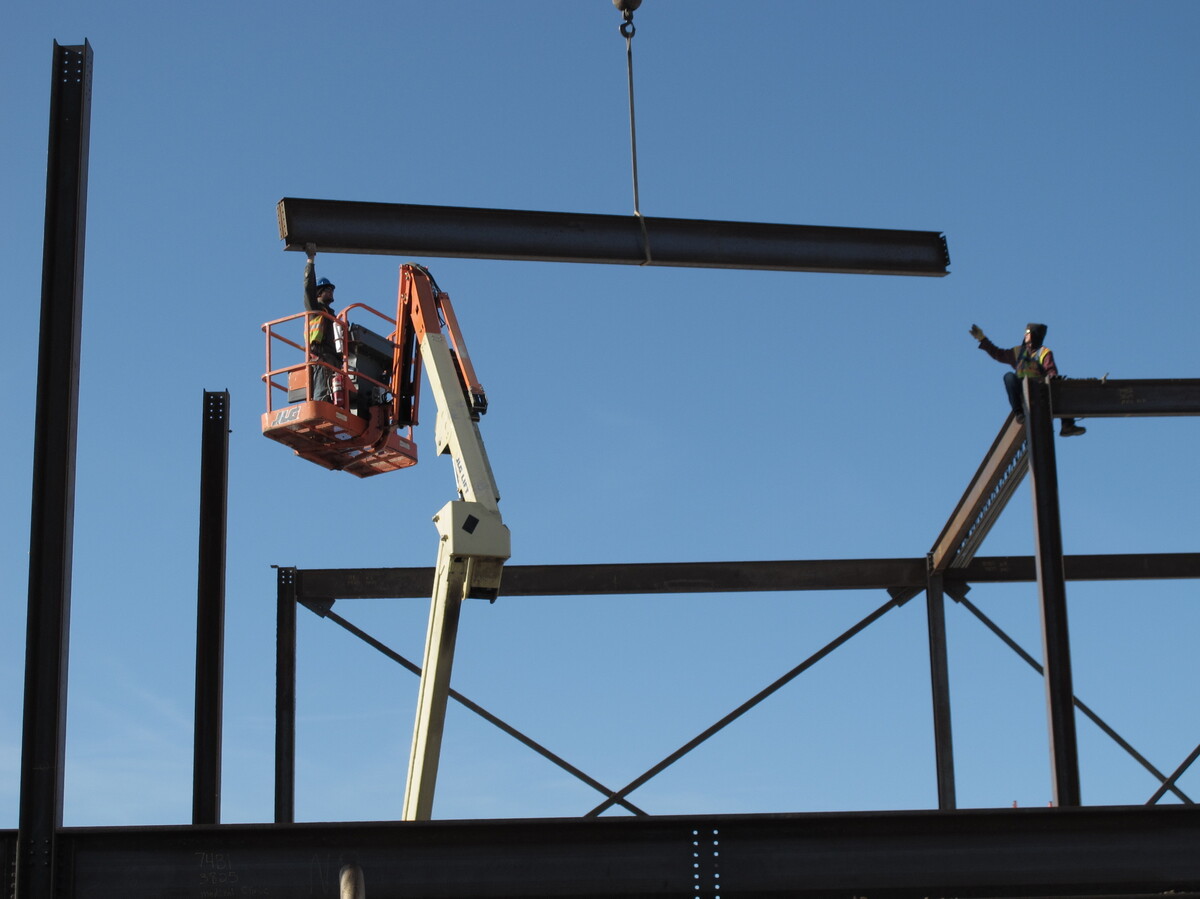 Construction workers ease a steel girder into place as part of a remodeling and expansion of the North Dakota State Penitentiary in Bismarck, N.D. An energy boom has helped the state maintain a budget surplus.

And more houses will crop up this year. Through May, 407 permits for single-family homes had been issued — more than double the number issued for the same period a year earlier. By this summer, about 700 lots will be ready to go under construction and have homes built on them, he says.

"Our homebuilders and housing folks are building as fast as they can," Hullet says. "And the question is, can we build the houses fast enough?"

"Literally, he was on his last tank of gas looking to find a job," Hullet says. "We've seen a lot of that. People come, basically living in their cars until they can find a job and get on their feet."

And with the influx of people, Bismarck is responding to growing class sizes to accommodate about 250 new students each year. Proposals to build two elementary schools for more than 800 students and one high school for about 1,300 students are up to a vote in September, says Tamara Uselman, the superintendent of Bismarck Public Schools.

Officials are maximizing all available space and have even leased room from a church to conduct classes. As part of a new strategy next year, a local elementary school will have two teachers in the same classroom.

"Every bit of space that we have, we use," says Uselman. "We have trouble finding a room for special services, like a timeout room."

The neighboring city of Mandan has faced similar growing pains. More than 280 children entered kindergarten this past school year, and the city projects a similar number in the fall.

"We're growing. It wasn't too long ago in North Dakota where there was a declining population," says Mike Bitz, the superintendent of Mandan Public Schools. "It's nicer to be growing than to be dying."